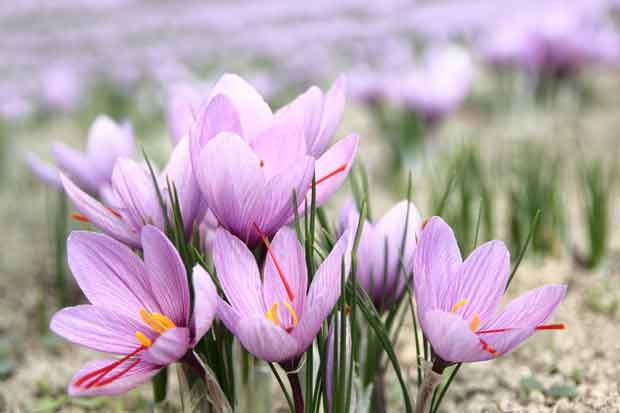 It takes 125,000-150,000 flowers to produce just one kilogram of saffron which can sell for $30,000. So harvesting the stigmas is a delicate process at Wynyard Estate in Central Otago’s Teviot Valley

Story and photos: by Karen Trebilcock

There’s been 15mm of rain overnight and the skies are threatening more but the first harvest of flowers for the day is already drying under paper towels on Wendy King’s dining table.

“The rain is fine; it doesn’t bother us because it’s about warmth,” says Wendy. “Frost slows things down but the flowers look perky when it’s warm and perky is good.” The field of saffron flowers.

She and her partner, Dr Graham Strong, have 1.2ha of saffron corms planted this year and they’re ready for the mountain of flowers.

Graham, who is a commercialization manager for Otago Innovation, a University of Otago company in Dunedin, is taking three weeks annual leave starting at Easter and friends, family and a few overseas couples courtesy of website HelpX have also been roped in.

Picking will take place several times a day as the flowers appear above the soil starting at dawn. They are then refrigerated until evening when there is finally time to carefully de-thread the three to five red stigmas from the centre of the purple petals. Clean hands are needed to stop any contamination and for every step of the process there are critical control points which are monitored. That’s important when a kilogram of the spice can sell up for up to $30,000.

“Last year we produced two kilograms and this year we hope for three to five. Between 125,000 and 150,000 flowers gives you one kilogram,” says Wendy. “De-threading is very social. We sit around the table and talk and laugh and have a few wines afterwards. It’s a great way to end the day.”

The stigmas are dried in dehydrators and then stored to increase the colour, flavour and aroma.

“Once you’ve smelt saffron, it’s a smell you never forget. It’s so distinctive.”

Wendy describes the spice as a flavour enhancer.

“With sweet things, it intensifies the flavour. With apricots it’s like summer in a jar. But with others, such as garlic and citrus, it takes the bitterness away.” 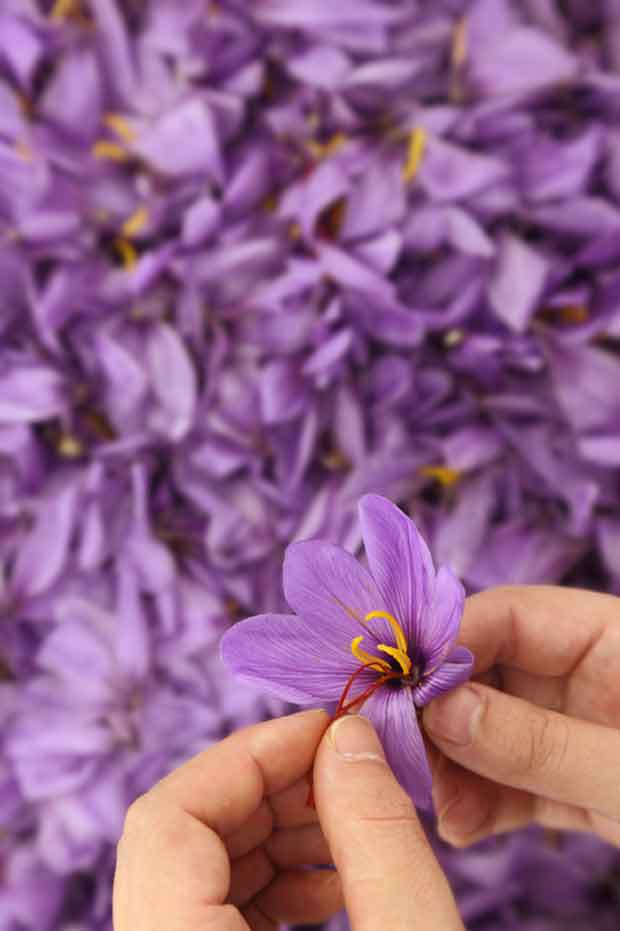 A chef by trade, she likes to experiment and puts the recipes that work on Wynyard Estate’s Facebook page.

More stories you might like:
A South Taranaki family goes with the grain in dairy country with ancient superseed quinoa

“A lot of people only use saffron to flavour rice, but you can also use it with potatoes or couscous or add it to butter and then dribble it over summer vegetables. It really makes the flavours pop. But there is so much more you can do with it.”

Saffron has a two-year shelf life and Wynyard Estate’s saffron is bought by high-end restaurants throughout New Zealand. It’s also available on their website and through speciality food stores in Dunedin, Wanaka and Clyde. Wendy also sells through several farmers’ markets in Central Otago.

“I enjoy meeting people and I can talk about saffron forever.” 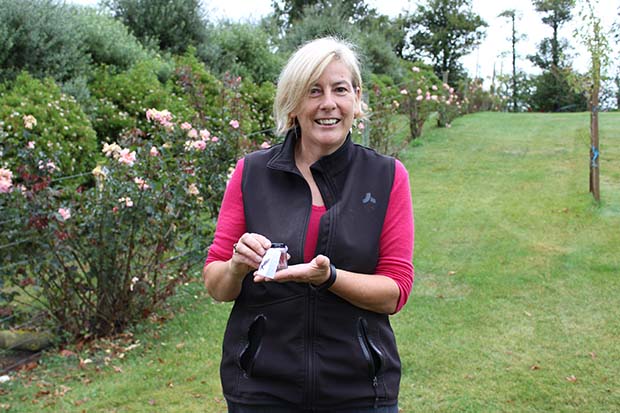 Wynyard Estate’s Wendy King with a jar of their saffron.

Crocus sativus grows from a corm, not a bulb (a bulb has layers) and the first leaves, known as jets, come in late March just before the flowers. The stigmas are bright red, quite different from the autumn crocuses found in many New Zealand gardens which have white stigmas.

“People will tell me they grow them in their own gardens but they’re talking about the autumn crocus, not the saffron crocus. I advise them not to use the white stigmas in cooking because they are poisonous.”

Iran is the main grower of the spice with Spain, Italy, Morocco and India also well known for production but saffron is also grown in the UK and Tas-Saf has been producing saffron in Tasmania since the 1990s.

In New Zealand there are growers in Canterbury, Central Otago and Te Anau. The plant needs hot, dry summers and crisp, cold winters. It can handle frosts up to minus 18 degrees C but ideally needs at least 50 days of 21 degrees C or more in summer. 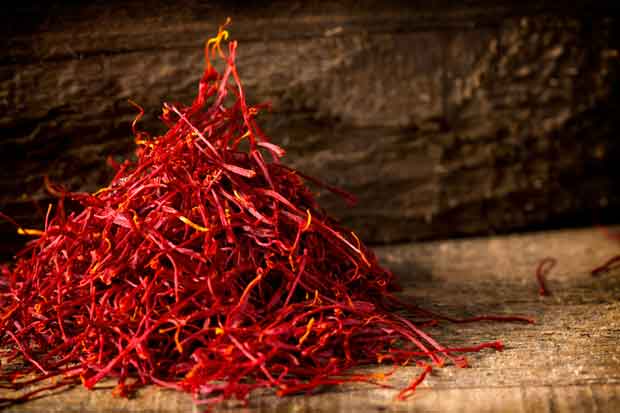 The corm is dormant between November and February which is when lifting and replanting, using a two-row potato planter, happens. Corms under 10g are disposed of as they are usually too small to support a flower. The largest corm Wendy and Graham weighed was 69g.

“We plan to lift every three years here. There were hundreds of thousands of corms and the planting, even with the potato planter, was very slow,” says Wendy.

Summer is also the time when weeds grow and spraying is effective early in the season in between the rows but it can only be done when the corms are dormant. For the rest of the year it’s hard labour.

More stories you might like:
This Auckland couple transform dried flowers into beautiful floral artworks through their business Mark Antonia

“You don’t want the roots of the weeds competing for nutrients and water.” 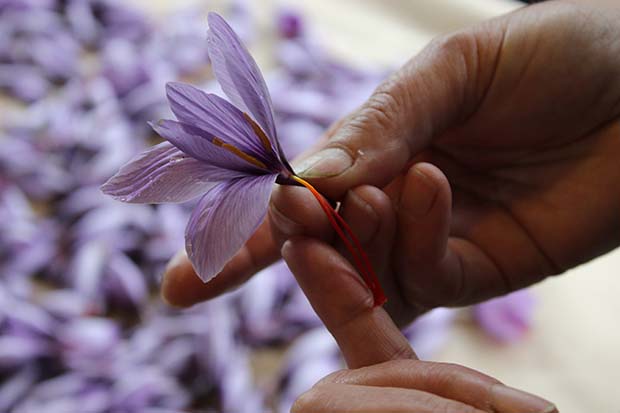 Untreated sawdust is applied to the raised beds to slow weed growth and to act as a sanitizer, stopping dirt particles from bouncing up and contaminating the flowers when it rains.

“It’s also like a blanket, keeping the corms warm.”

Flowering happens over about eight weeks and is most intense in the middle four. Wendy keeps the saffron from the first week of picking for her own use.

After flowering, the jets grow thickly covering the whole mound and the corm produces daughter cormlets. Moisture is important prior to flowering and autumn rain is common in the Teviot Valley. However for the summer, dry and hot is what is required. A fungus can attack the corms and all corms are treated with a fungicide before replanting. Regular lifting and replanting of corms into a new area also helps keep it at bay. 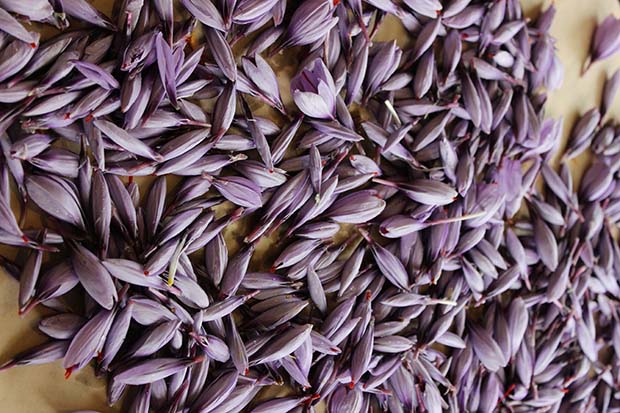 “At this time of the year there is lots of fodder beet and kale grown as winter feed around us which attracts the white butterflies.”

A problem of a different sort is bees.

“They become addicted to the saffron. You flick them out of the flower when you’re picking them and you can just see they’re in their happy place. If they get caught in a flower overnight they can unfortunately die from it. We’re growing lavender hoping they’ll be attracted to that instead.”

The couple has put up fine netting on the edge of the saffron patch to keep out rabbits and dust. A sign on the nearby gravel road asks motorists to slow down.

Wendy and Graham chose saffron when they decided they needed a change of direction. Wendy had been taking saffron daily for her health so knew what it could do.

“It’s the spice of joy and happiness. A lot of spices have beneficial effects on the body but especially saffron.”

Graham, with a PhD in botany, was interested in something they could grow which had a high commercial value.

“We were both working full time and looking for something we could do together. In 2010 we bought 20 corms off TradeMe and grew them in planters in Abbotsford in Dunedin.”

They spent 2011 investigating areas where it could possibly grow and in 2012 bought a large house with 1.4ha of garden and another 5ha of bare land between Ettrick and Roxburgh on the banks of the Clutha River. 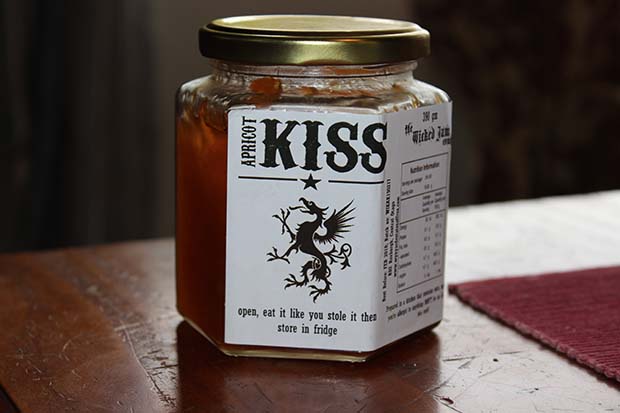 They started planting, their harvests slowly increased and in 2015 they had their saffron tested at the University of Otago against the international standards for saffron quality (ISO 3632). It came back premium grade one.

“It’s the highest-quality saffron for colour, taste and aroma and there’s nothing else in there but saffron which is what we want.”

With imported saffron it is often difficult to determine quality and in many instances it contains ‘floral waste’. Wendy explains: “Floral waste is usually the white and yellow bits of the saffron thread. It isn’t saffron and it’s usually left in to increase the weight.”

Wynyard Estate test their harvest every year to ensure they are still premium grade one.

Wendy advises anyone thinking of growing saffron to look beyond the dollars.

“You can start small, but you need to realize that over time you need access to more land to expand. It’s a lot of money for a kilogram but there’s a difference between just growing saffron and growing premium grade-one saffron. Every step of the way you have to do it right. There is a lot of work before you even start harvesting and when harvest begins it is full on.” 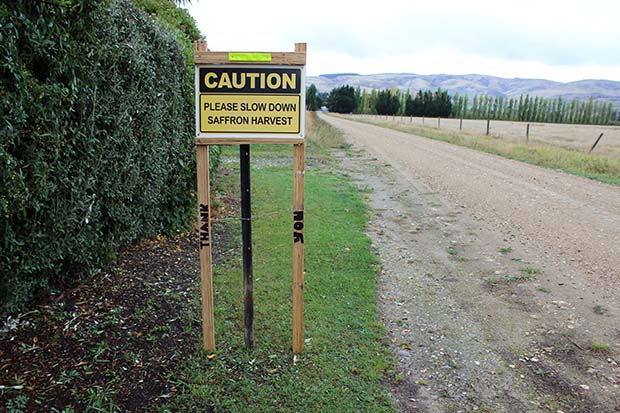 A sign by the front gate asks drivers to slow down on the gravel road to stop dust contaminating the flowers.

Food Health and Safety protocols are also important. Growers now need National Programme 3 Certification to produce the spice. While she doesn’t want to discourage people, Wendy says that the first few years you aren’t likely to make any money. This is a long-term crop which will expand each year so you need to prepare in advance of the following year’s crop: more land, more people to harvest it and a bigger market.

“Like a premium wine, only those who really take the time to understand it can coax it to its full potential. Saffron is delicate, temperamental and unforgiving when flowering. It’s not a survivor like other crocus plants which can grow almost anywhere and thrive even if neglected.”

Even though saffron needs constant care and attention, Wendy says, “It’s so exciting when those first jets come through the ground and you know then the flowers aren’t far away. There is not one part of it I don’t love.”

How to make an income from cut flowers