In the first of our new blog, Duncan White enters dangerous territory when cooking with expired food.

First a disclaimer. I landed this gig out of pure nepotism. Seven years ago I set up the store cupboards for my Aunt, NZ Life & Leisure editor Kate Coughlan’s Central Otago crib. The cupboards were stocked with everything to survive for months if the place was cut off by snow, the power failed, or more likely, the owners ran out of enthusiasm to drive to town to visit the supermarket.

Recently I went back with the owner and cleaned out the same store cupboards. Many of the same items were in the same place, never having seen the light of day. There were staples including various types of milk in Tetra Pak, cereals, bottles of fruit juice, canned veggies, canned soups, canned tuna, crackers, bottled sauces, powdered drinks, jelly crystals, powered milk, tofu and tamari. A smorgasbord of seemingly perfectly good food, all in airtight packaging and stored in a dark, dry cupboard but now very well past their Use By or Best Before dates.

Motivated not by heroic resourcefulness like Shackleton’s Ross Sea party, nor a desire to save the landfill from unnecessary waste, but pure old-fashioned tight-fisted parsimony I offered to take the food home. 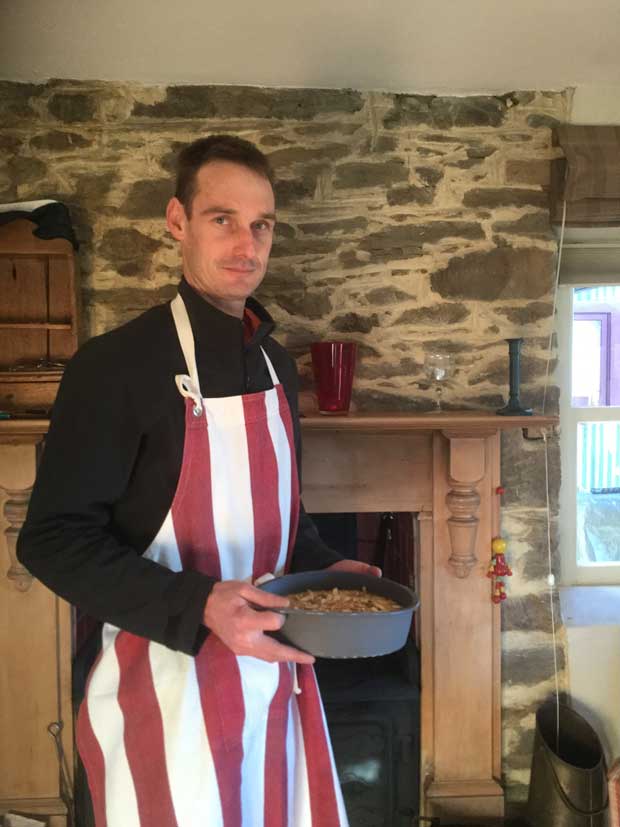 Duncan White in the kitchen.

Your editor was quick to seize the opportunity to prove there is no such thing as a free lunch, even if it was best before 13 September 2009 (more on that in a later instalment), and cajoled me into writing a series of articles on expired food.

The only qualifications I have in this field are a significant supply of expired food, guts like an old dog, and most importantly, I live alone so there is little chance of poisoning anyone else.

Over the last week I have been enjoying a variety of packaged cereals three years past their best by date and not as fresh as a new packet, but still perfectly edible. These were accompanied by oat milk in a Tetra Pak container, also three years past its best before date. The oat milk was a bit of an adventure in its own right. The oat milk was a bit watery, to begin with, but a good shake fixed that. I have now developed a bit of a taste for it and have also enjoyed it with old rolled oats as my porridge. Oats as a solid and liquid in the same meal, who’d have thought? So far I’ve had no problems with old cereals from sealed packages, or even the wheat biscuits from the folded top packages. 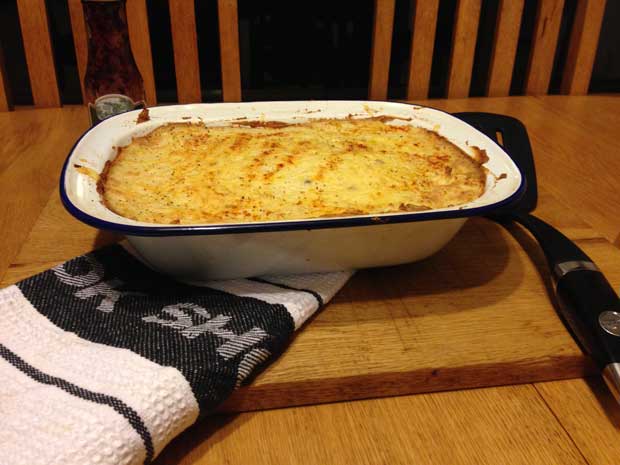 Do not try this at home: Duncan’s Fish Pie made with made with milk powder, pasta and tinned fish.

For the main course, this week came from the canned goods, the milk powder and pasta combined in a fish pie. This is a recipe I remember my Mum cooking when I was a little boy. The pie is a simple, filling recipe that is just a combination of tinned fish, onions, whatever diced vegetables are to hand, pasta shapes with a cheese sauce stirred through, covered with a thick layer of potato topping and baked in the oven.

For the veggie component, I used canned corn from an old slightly rusty tin (which still tasted fine) and canned peas. Prodigal peas, apparently these were NZ peas canned in Australia then repatriated. Whoever knew that we ship NZ peas to Australia, can and then repatriate them?

Based on the taste and the olive colour why would you bother when frozen peas are so much better, and they don’t have to cross the Tasman twice? The peas had no date marking but were discoloured and awful, and having never eaten canned peas before I couldn’t tell if this was as a result of age or the canning process, but would recommend giving them a wide berth if possible.

The pasta component of the pie came from dried spirals from a sealed bag. These were cooked in the normal way and mixed through the veggies along with a cheese sauce. The pasta showed no ill effects from long term storage.

The simple cheese sauce came from Edmonds Cookery Book and was made with reconstituted dried milk powder (only eight months past its Best Before date). The reconstituted milk was also mashed with boiled potatoes from the editor’s garden to form the potato topping for the pie. On with a dash of paprika and into the oven to heat through and brown the top. 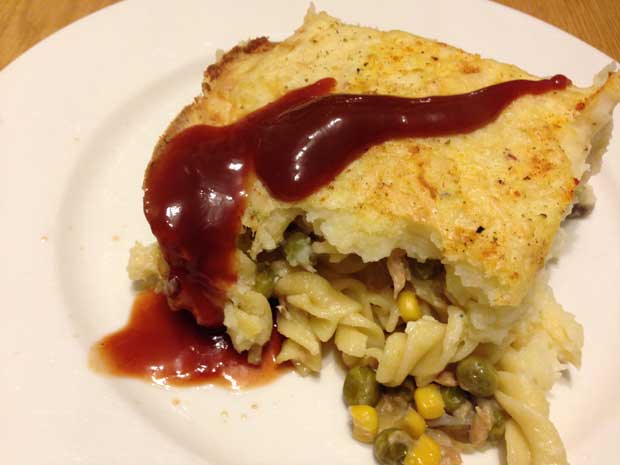 The pie, served with a dash of tomato sauce (expired of course)

Served with a splash of ketchup five years past its Best Before date this version was almost as good as Mum’s original. As I was tucking into the pie, I recalled eating this dish as a child with the family from the very same table and in the very same chairs. Gone are the water marks where my brother spilt his water every night, but if you look closely, the table still bears the scratches from my school bag. Different house, different island, but the food memories are still strong.

There were enough of all ingredients to form two pies. One was cooked immediately; the other went into the fridge uncooked. A slice of the cooked pie was reheated the next day for lunch with another for dinner, then polished off for dinner the day after that, three days eating is not a bad effort for a single pie. But wait there’s more. After a weekend away I cooked a slice of the second pie on Monday night too, and another on Tuesday and finished it off on Wednesday evening. Not bad for an old pie. 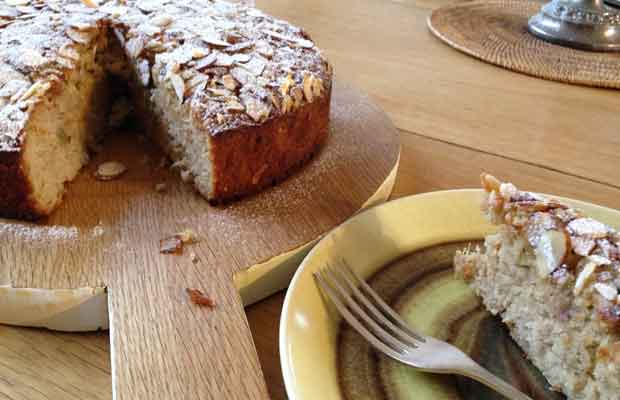 For dessert, it was back to the present with a gluten-free spiced apple cake. For a special treat, I made this with all new ingredients and apples fresh off the tree. The recipe and method came from Emma Galloway with some amendments to the fruit contents. I also spiced it up a bit more than the original.