Engineering prowess is showcased throughout the Lake Dunstan Trail with clip-on bridges floating above the water at Pickaxe Bluff.

Central Otago is already famous for its three “Great Rides”, but now its trail title is ensured with a stunner of a new off-road track that reveals more of the region’s previously inaccessible splendours.

Cycling in Central Otago excites all the senses. The warmth of sun on the skin, the hiss of bike wheels rolling over smooth gravel, the delights of the food and wine on offer along the trails. Also, the aromas — thyme, pine, fruit tree blossom, lupin, vipers bugloss, eucalypt and rosehip — and, of course, feasting the eyes on all that superlative scenery, which is all the better enjoyed by bike.

Countless thousands have already pedalled the Otago Central Rail Trail — a family-friendly meander of some 150 kilometres that was the first of the area’s trails. But that route is now just one of many linking up across Central Otago to allow cyclists — and walkers, and runners — access to hundreds of kilometres of the region’s delights.

And with the trails intersecting towns, riders may challenge themselves to multi-day expeditions or enjoy shorter day rides staying in comfortable accommodation. Non-cycling days mean an opportunity to explore other diversions, such as wine tours, mountain walks, helicopter rides, golf, speeding on a river or racetrack, even curling up with a book, and all within easy reach.

The latest trail, and to date the most technically impressive, is the 55-kilometre Lake Dunstan Trail. It runs from Smiths Way at Mount Pisa, down Lake Dunstan, through Cromwell Heritage Precinct, around the Bannockburn arm of the Kawarau River and Cornish Point, then down the western bank of Lake Dunstan to historic Clyde.

The Lake Dunstan Trail was developed by the Central Otago Queenstown Trail Network Trust, which is creating a $26 million, 536-kilometre network of trails connecting Queenstown, Cromwell and Wānaka to existing “Great Rides” beginning at Clyde.

Those trails include the Otago Central Rail Trail and the Roxburgh Gorge Trail (with its 13-kilometre section by jetboat), which links to the Clutha Gold Trail, finishing in Lawrence. The three trails are all designated “Great Rides” as part of Ngā Haerenga, New Zealand Cycle Trails. Riders among the vines at Bannockburn.

All the trails are a massive undertaking but, having been lucky enough to have had a sneak preview, I can attest that few better showcase the mind-boggling and body-bending hard work and expertise than the soon-to-be-opened section of the Lake Dunstan Trail.

This runs 25 kilometres from Cornish Point in vineyard-rich Bannockburn, skirting the bluest of waters down the Cromwell Gorge to historic Clyde and its hydro dam. Much of the trail has been newly etched into the steep hillside, with bolted-on bridges hand-constructed onsite and cantilevered over the lake waters when the sheer, glittering specularite rockfaces thwarted excavators.

The first two sections of the Lake Dunstan Trail are a genial jaunt for cyclists of most abilities and fitness, with plenty of cafés and vineyards alongside to offer rest and refuelling. 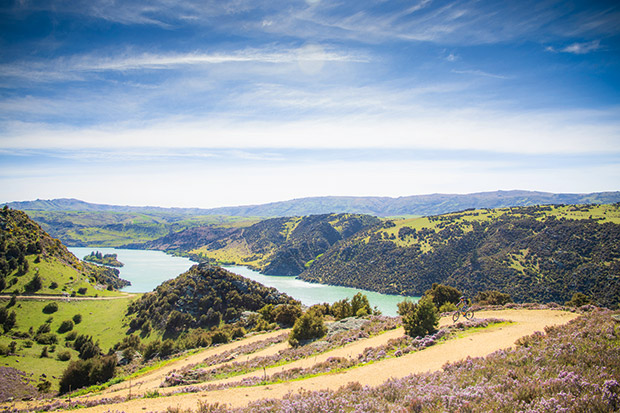 Stunning views among the wild thyme in flower on the Roxburgh Gorge Trail, another of Central Otago’s “Great Rides”.

However, while still being a Grade 2 ride, the Cornish Point-to-Clyde section requires an extra gear or two — along with full water bottles, charged e-bike batteries and a substantial packed lunch.

But it’s a total thrill to cycle along hillsides inaccessible until now. Many people will have driven between Cromwell and Clyde, gazing across Lake Dunstan (or the turquoise ribbon of the Mata-au/Clutha River pre-hydro dam) in fascination at the inhospitable moonscape of the Cairnmuir Mountains.

It’s thrilling also to spot the plentiful signs of bygone goldmining era, such as the hand-built water races and a pickaxe buried in the rock at Pickaxe Bluff, and imagine the diggers’ privations in that dramatic but unforgiving landscape.

Central Otago’s newest trail, launching fully in mid-March, certainly has something for everyone, and adds more mileage to the region’s reputation for offering off-road trails to delight riders for as long as their energy — or e-bike battery — holds out.

All bike and walking trails claim fantastic scenery, but the Lake Dunstan Trail claims the crown for engineering ingenuity.

The Cornish Point-to-Clyde section features 450 metres of bolted-on bridges over eight sites, each worthy of a breather to admire the building skill required. Abseilers first scaled the rock and installed cliff-face scaffolding. 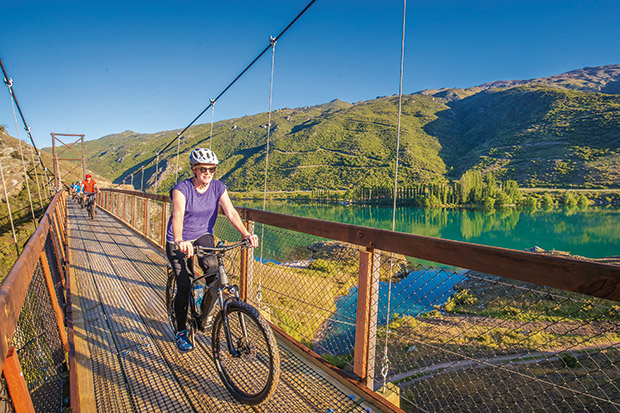 Anchor holes were then drilled for steel plates, to which transoms and support props were welded. Deck joists were then lifted into place and welded to the transoms. Decking — the boards hand-cut to mould the rocky contours — and handrails finished the bridges. Some might hesitate to ride out over the lake waters, but these bridges are rock solid.

Then there’s the spectacular 85-metre swing bridge across a ravine at Specularite Creek named for the sparkling hematite rock common along the trail. The specularite found here is potentially billions of years old and unique to this area.

Parts of the swing bridge were helicoptered in to be assembled onsite, while other materials were delivered by barge. Already the metal used on the bridges is oxidizing nicely to tone with the landscape’s palette.

Such engineering wouldn’t have been required had the trust taken the easy route and built alongside the highway on the eastern bank. But for trail users, west is definitely best.