Happy campers: Caroline Bree’s 1966 blast from the past A retro car and caravan combo brings reconnection with the past and a raft of brand new memories. There is a code of conduct for guests lucky enough to land a night or two in Caroline Bree’s 1966 Zephyr caravan. Visitors should:

a) bring only one squishy bag each;
b) bring multi-purpose clothing (merino washes well in a bucket);
c) be ready to eat and drink well;
d) be ready to talk well;
e) be ready to read well (several copies of New Zealand Short Stories selected by CK Stead are on board);
f) be ready to sleep like a baby.

“It’s a time capsule on wheels,” says Caroline, who lives in Auckland. “It brings a sense of stepping away from it all and allows for reconnection. We had some teenage girls staying with us once who were horrified they couldn’t plug in their hair straighteners. By the end of the holiday they were enchanted. They lay on the old-fashioned wooden and canvas camp stretchers out in the awning and said, ‘Oh, we feel like those young women who lived during the war’.” 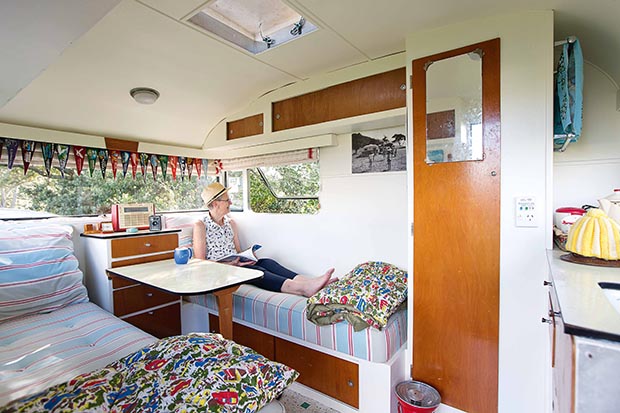 Caravan companions should also be prepared for cheese and oat biscuits, gin and tonics, sausages and stir-fries and dark chocolate for dessert. “Menu planning is strategic because of limited storage,” says Caroline. “I pack the frozens around the fresh food and we have a plug-in chilly bin as our fridge once we’re connected to power at a campground. Meals are planned in advance according to thawing, and we work from a long-term reminder list.”

Reminders are at the core of Caroline’s caravanning. She has awning poles and picnic tables in her blood. “I was an only child and my mother and father were older parents. My father, who had an automotive supplies business in Palmerston North, was a true example of a skilled post-World War II man – he had a fabulous workshop, he grew vegetables, he fixed things and he built three caravans.” Caroline’s school holidays were care-free, spent camping with cousins at campgrounds in Paraparaumu, Napier, Gisborne and Auckland. “It was our family culture and I loved those times. Throughout my parents’ lives they never traveled beyond the North Island. They caravanned right up until Mum’s death at the age of 80.” The day that Caroline turned 55 years old she found herself on Trade Me clicking the mouse on a childhood memory. “It was impulsive. I saw a 1965 Jackson Cub caravan for sale and I bought it. I’ve learned over the years that we should live life as fully and as happily as we can – in case the journey ends earlier than we’d hoped.” The 1960s portable record player is “an exercise in changing the 45s. It’s great fun.”

Caroline equipped her Cub with her parents’ much-loved camping and picnic gear and a haul of 1950s and 1960s family snaps. But five years of cheerful holidaying in the Jackson Cub ended in despair when the little caravan was stolen during the night from its weekly berth. “It was probably lifted onto the back of a truck, and it was never seen or heard of again.” She says her grief was short-lived. “Several days after it was stolen the Christchurch earthquake hit. I thought: ‘Actually you need to get a grip. A stolen caravan amounts to nothing.’” She kept an eye on Trade Me and six months later she was towing a 1966 Zephyr from Wanaka to Auckland. Then two years ago she matched the Zephyr with its ultimate partner – a 1966 Mark II Riley Elf.

“It was so serendipitous but the car was the same colour as the caravan. Its 998cc four-cylinder Cooper engine is perfect for short-haul towing and it goes like a bomb. I’m its third owner – it only had 68,000 kilometres on the clock.” The well-executed Riley Elf was developed by the British Motor Corporation as a bigger-booted and bountiful version of the motoring marvel, the Mini. While the Riley shared the Mini’s wheelbase, wings and windows, it pulled new punches with leather upholstery, deep pile carpet, a burr walnut dash, air vents, fin tails and a smart radiator grille. 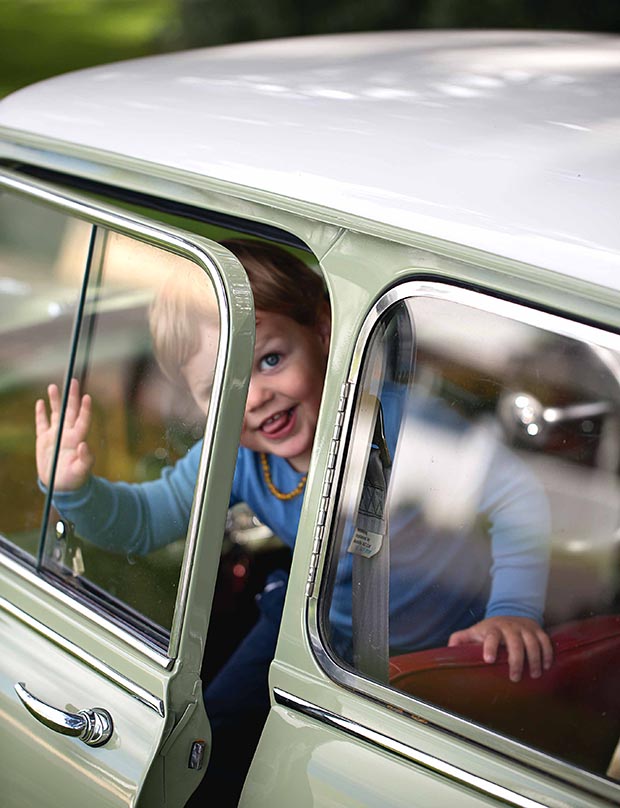 Hugo, Caroline’s two-year-old grandson, is “a highly sociable little camper” who loves helping out in the caravan.

Offended by the meddling, the Mini’s celebrated designer Alec Issigonis refused to be involved so his colleague Ricardo Burzi was assigned to the job. While some dismissed the end result as a “Mini on steroids”, others clambered for a set of keys. Some 30,000 Riley Elfs were produced between 1961 and 1969 before the fabled Riley marque dropped from sight during the 1970s British car manufacturing mêlée. “It’s nimble and zippy with great handling. It doesn’t sit in the garage – I use it three or four times a week. I’m always getting the thumbs up at intersections. Our ideal motorway speed is 75 kilometres, so we keep out of people’s way.” Caroline’s Riley Elf has flown though its warrants and its minor tweaks comprise new door and boot seals, replacement windscreen wipers, brakes shoes, wheel cylinders and a bit of chrome trim. “She tows the caravan beautifully to a local beach like Martins Bay or Opoutere,” says Caroline whisking through suburban streets. For longer distance trips – Central Otago last summer – Caroline saddles the Zephyr to the family’s modern Mitsubishi. “Ballast is strategic. The chest of drawers between the beds has 20 issues of NZ Life & Leisure in the bottom and our 1951 Wee Baby Belling cooker adds some good weight.”

More stories you might like:
8 cute-as-a-button tiny homes around the country — from suburban Auckland to Central Otago 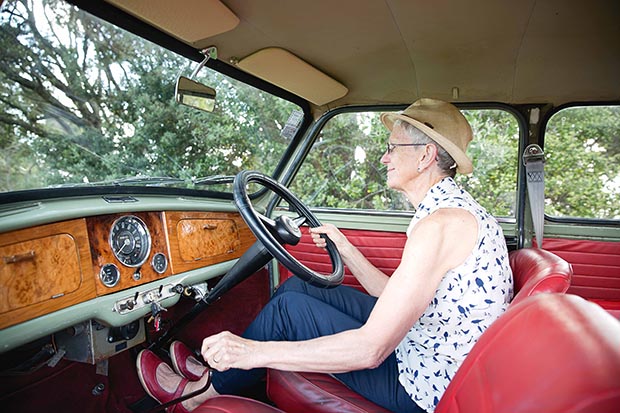 She has decked out the caravan in period style. “Everything is genuine and useful and discovered at school fairs or op shops. I’m embarrassed to say I retrieved matching eiderdowns with a gorgeous vintage caravan print from a pile of rubbish. Four hot washes later and a reconstruction – and they’re like new.” Visitors on holiday sorties include good friends and family – her children Liam (26), Rosie (23) and grandson Hugo (2). With an engaging working life as a member of Auckland City Hospital’s high-risk midwifery team, Caroline says the Riley and Zephyr combo brings her “big magic”. “It is an antidote to get away. I still feel the same bubble of freedom setting off in the caravan today as I did with my parents 60 years ago. Aren’t I lucky? I just love the authenticity of the experience.”

– Motels can be soulless and prohibitive. Caravanning is economic and gives modern day kids a totally different experience.

– Organize to stay at a campground outside the main summer rush. There will be no crowds and it spreads business for hard-working campsite owners.

– Caravanning encourages travel on back roads, enjoyment of the journey, coffee with a view. 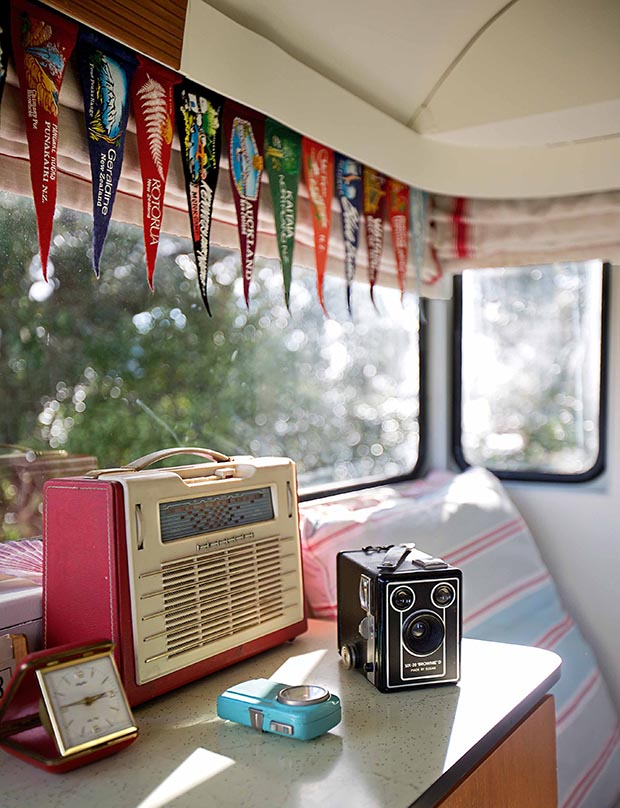 Aotearoa offers a range of caravanning options from DOC campsites with basic facilities to freedom camping (usually in public places – caravans are expected to have waste self-containment) to fully serviced campgrounds and holiday parks. A good-sized secondhand caravan (three to four meres in length and suitable for a family) can often be bought for between $3000 and $8000. A powered site for a caravan at a fully serviced campground usually costs between $30 and $70 per night, including full cooking and bathroom amenities.

At the beach I’ll be reading The Crime Writer by Jill Dawson and the latest book by Scottish crime writer Val McDermid or English novelist Jeanette Winterson.

What I’m listening to:

Radio New Zealand will be playing in both the car and caravan and I’ll be enjoying the Dixie Chicks because I’m going to their concert.
The games we’re playing: We have cards, Scrabble and a crib board in the caravan but with two-year-old Hugo on board we’ll also be playing The Very Hungry Caterpillar board game.

Vietnamese stir-fry made with beans, courgettes, chilli, garlic and spring onions, all collected from the garden before leaving home. Add thin strips of chicken or pork, a tablespoon each of fish sauce, lemon juice and sugar and serve with fresh coriander. We might follow it with a crumble made with berries or stone fruit topped with homemade muesli, warmed in the Wee Baby Belling oven and served with Greek yoghurt.