How to grow galangal 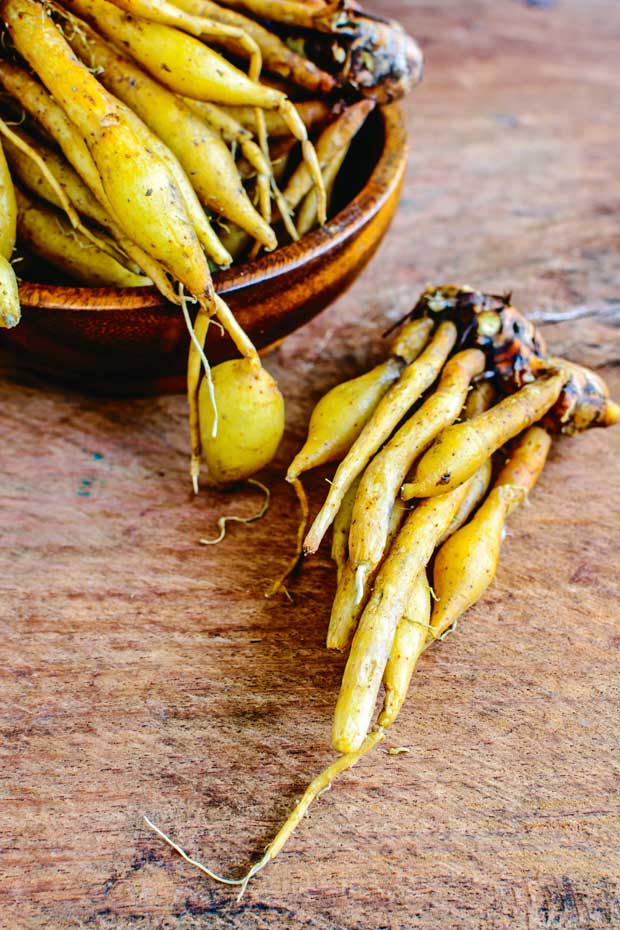 This root is a spicy little cousin of ginger and a great addition to the garden, especially if you love Thai cooking. Read on to learn about galanga and check out the recipes below.
WORDS: JENNY SOMERVELL

Put a sliver of galangal in your mouth – if you dare – and you’ll experience a curious, sharp, sweet taste on the tongue. Then you’ll feel ‘the burn’, more powerful than ginger. However, the flavour is more complex than ginger. Our Singaporean friend and avid cook Lilian Loh describes it as a ‘clean, peppery bite with pungent spiciness.’ Think mustard rather than ginger, with a shade of lemon, a trace of pine needles and hints of tropical fruits. What she is describing is the flavour of greater galangal (called kha in Thai), one of four types of galangal. It’s used with great relish in Thai cuisine, almost to the exclusion of ginger, and is sometimes known as Thai or Siamese ginger.

In some Thai dishes, galangal is the star performer as in tom kha gai (see page 71) which translates as boiled galangal with chicken. More often it plays a subtle role, complementing rather than dominating the flavour. It is one of the key ingredients, along with other spices and herbs, in Tom Yum soup (my absolute personal favourite) which features the wonderful sweet, sour, salty, spicy combination of mukrat (kaffir) lime, lime juice, chilli, lemongrass and fish sauce. Galangal is an essential ingredient of most curry pastes including Malaysian asam laksa, Cambodian samlor kor ko soup and various Indonesian dishes such as spicy beef rendang. It is often included in seafood dishes as it balances out ‘fishy’ flavours. You can tell galangal is related to ginger by its tall stems and flag-like green leaves. Dig down a bit and you’ll find ginger-like rhizomes just below the surface. But if you are tempted to substitute ginger for galangal in recipes, don’t! When it comes to galangal, only the real thing will do. The distinct peppery flavour is what makes Thai food so distinctive, and nothing beats fresh galangal. But finding the real thing may not be so easy as there is a lot of confusion about what is ‘real’ galangal, and not everything sold as galangal is correct. 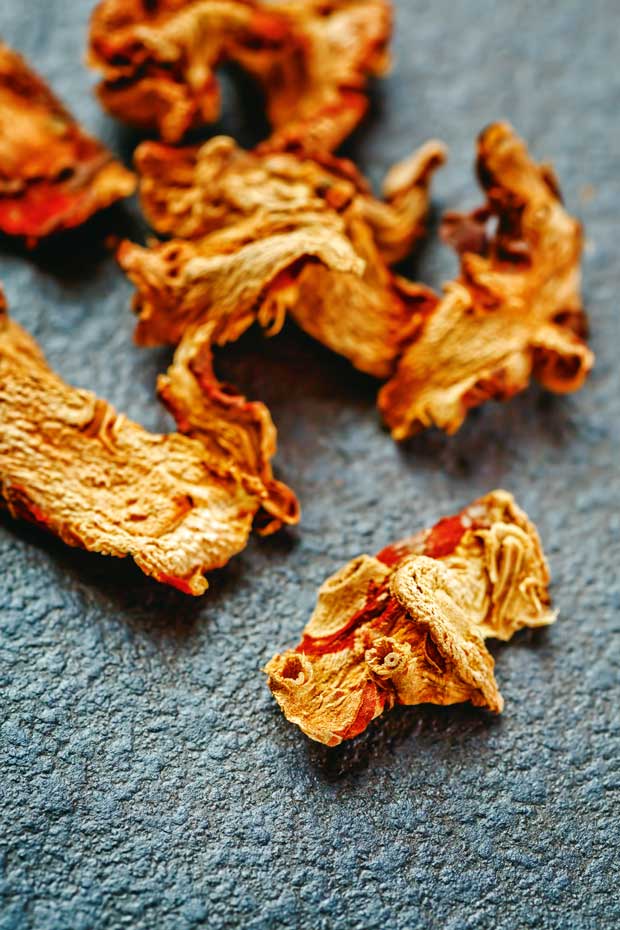 How galangal rhizomes are used, either fresh or dried, makes a huge difference to the flavour of a dish. Fresh galangal has a pure, refreshing odour and a mildly spicy flavour. Dried galangal is less fresh and has a more spicy, musky, rooty flavour, something between ginger and cinnamon. When bought as slices and reconstituted in warm water, it is closer to the flavour of the fresh root. In south-east Asia, fresh galangal is usually preferred, and dried is only used when fresh is unavailable. An Indonesian dish using dried galangal is rendang, a spicy beef (or buffalo) stew combining coconut milk, dried chillies, garlic, dried turmeric, ginger, Indonesian bay leaves and galangal. Rendang is famous for its hot, aromatic flavour and soft texture.

Galanga or galangale (kah or gah in Thai) is the culinary species widely used throughout the whole of south-east Asia. It is a larger species, growing to a couple of metres in its native habitat, less in temperate climates. The rhizomes are larger too, up to the size of a clenched fist. These produce buds or shoots with a pinkish tinge which resemble young ginger, but the skin is much tougher with dark, ring-like lines, giving the rhizome a segmented appearance. Cut into the rhizome and it is dense and woody, like cutting rope, especially if older. Younger rhizomes can be used without peeling. There are several varieties of galangal. The most common is red galangal, which bears tall panicles of tiny red and white flowers in late summer. 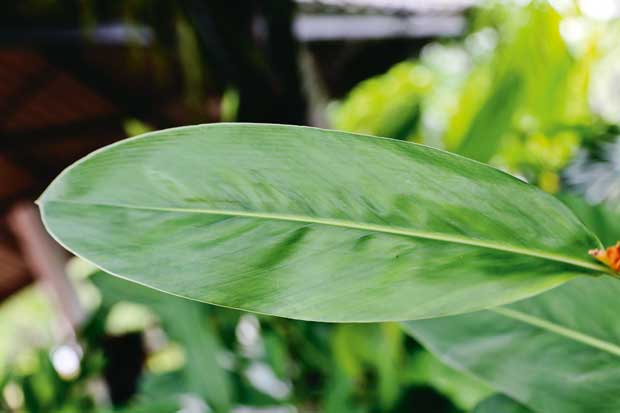 The name lesser galangal has been applied to A. officinarum and more often Kaempferia galangal.
A. officinarum is a native of China and is used extensively in South China. The rhizomes have a dark reddish-brown skin, a near-white interior, are 3-10cm long, and rarely over 2cm thick. They are stronger in odour and taste than greater galangal. Lesser galangal’s culinary use is restricted to a few indigenous cuisines, mainly within the Malay peoples in Malaysia and Indonesia. It is essential in the spicy-sweet food of Javanese cuisine, and shines in Balinese dishes, such as the famous Balinese roast duck (bebek betula). In China, especially the Sichuan province, it is referred to as sand ginger or sha jiang and is always used dried.

While greater galangal is superior in flavour, lesser galangal has the higher concentration of galangin (formerly called galangol or alpinol) and its many health benefits. It has been used as a medicinal herb for centuries throughout Asia and Europe in the Middle Ages and has a warm, stimulating effect on digestion, rather like ginger. It has been used as a remedy for nausea (including sea sickness), indigestion, poor circulation, rheumatism and to tone the tissues.

Another species, Chinese keys, is not closely related to galangal but is closer to lesser galangal in taste. It is named for the finger or key-like configuration of the roots. Chinese Keys is used in the famous jungle curries and spicy salads of Northern Thailand. Whether you use it in cooking or not, it is a handsome conservatory plant forming dense clumps of very wide leaves and showy pink orchid-like flowers. It is hardier than true galangal.

HOW TO GROW GALANGAL 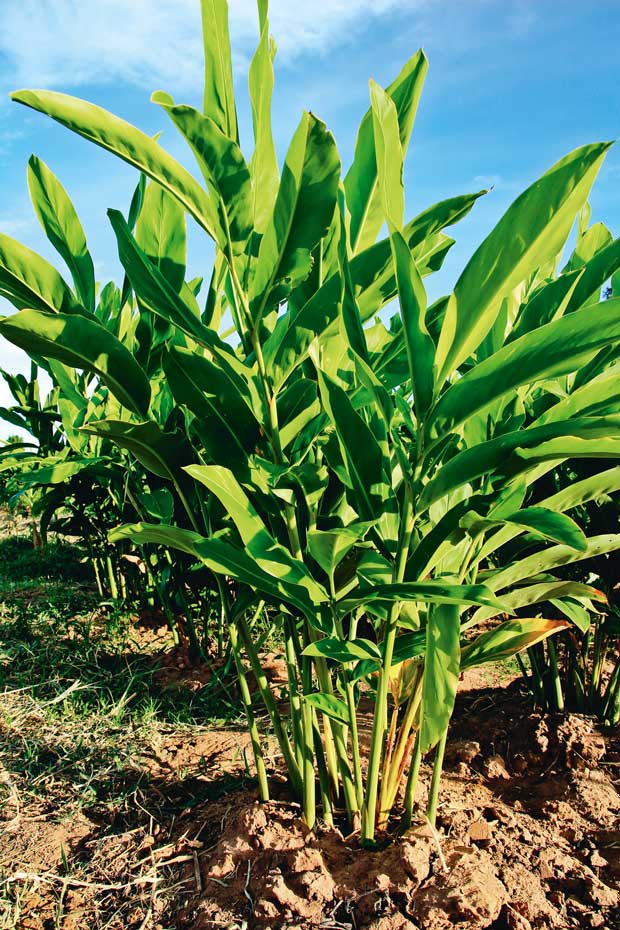 Galangal is a subtropical plant and likes lots of warmth, full sun, and a very rich soil, high in organic matter. Treat it rather like sweet corn: high nitrogen, frequent liquid feeds with seaweed or worm wee, and regular and deep watering throughout the growing season (but not in winter). Galangal can readily be grown in frost-free areas, where it is usually evergreen. However, it is hardier than ginger so it can be grown in frosty areas if it gets protection from winter frost and you give it as much warmth as possible.

Here in the South Island, just north of Christchurch, my plant dies back over winter. I treat it the same as my mukrat (kaffir) lime, growing in it a large pot and bringing it indoors when it’s cold. I keep it quite dry over winter as the rhizomes are prone to rotting when not actively growing. Extra winter drainage such as stones in the base of the pot will help. Galangal works well as a conservatory or greenhouse plant. It has few pests other than the usual greenhouse opportunists such as aphid and mealy bug. A fresh rhizome, placed in a dark place for a few weeks, will grow a bud. Plant the rhizome just below the soil level and keep warm and moist. In a few weeks shoots and roots will grow and the galangal will be away.

I was delighted to receive a greater galangal plant as a gift. I divided it so I could rotate harvest between two plants and divide at different times. Harvesting rhizomes is not difficult. You only need a little at a time and fresh is best, plus it’s very satisfying: simply dig into the loose potting mix and snap a piece off the outside of the clump. Wash and trim away any rotten, bruised or woody parts. Slice or grate as your recipe requires, and enjoy the pungent, inimitable, richly resinous aroma. It will put your Asian cooking in a class of its own. A reliable source of galangal is Russell Fransham’s subtropical nursery: www.subtropical.co.nz

De-seed and soak the chillies in 100ml of water for 15-30 minutes; five chillies is mild, 10 is for the more adventurous. Add all the spice mix ingredients to a bowl, including the water from soaking the chillies, and grind into a paste. Fry the spice mix in oil on medium heat until it thickens and darkens slightly but do not burn the spices. Add the coconut milk, salt, sugar, fish sauce and chicken and simmer for 15-20 minutes, until the chicken is cooked. Stir in the coconut cream to thicken. Blanch the rice vermicelli and bean sprouts. To serve, put the blanched rice vermicelli in a bowl topped with bean sprouts, chicken, half a hard-boiled egg and some julienned cucumber. Pour over the sauce and sprinkle with Vietnamese mint. 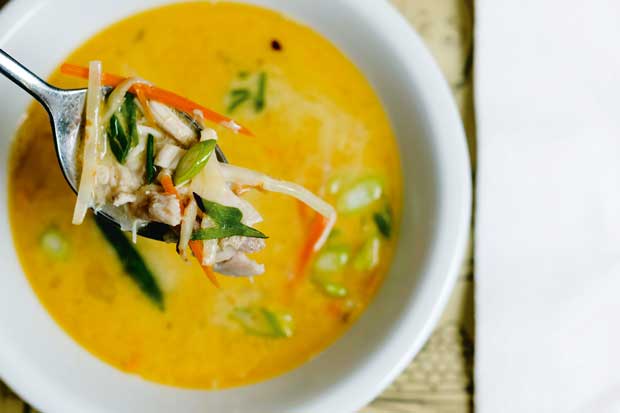 Put the cold water, chicken thighs, galangal, lemongrass, mukrat lime leaves, chilli, coriander stalks and roots, and sliced carrot in a pot and bring to the boil. Add the coconut milk, fish sauce, palm sugar and mushrooms. Reduce the heat and simmer until the chicken is cooked. To serve, add 2-3 tbsp lemon or lime juice in a bowl. Ladle the chicken, vegetables and soup into the bowl, then serve with hot rice and garnish with coriander leaves.