Jim Kayes has been a journalist for 25 years. He survived growing up with four sisters and is now married with two daughters. This week he takes the family to Samoa and it is confirmed, those daughters are an easy step ahead of him in his Apia-bought jandals.

It wasn’t the best of starts. Rain smashed into the roof of the hangar used as a temporary arrivals hall at Samoa’s Faleolo Airport, the humidity adding to the sweltering heat.
“Dad, this wasn’t in the brochure,” the youngest daughter laughed, poking fun at the in-flight spiel I’d delivered about how we were escaping Auckland’s endless rain for a week of sunshine. It was the girls’ first visit to Samoa and to say they were excited is an understatement. We’d told the youngest about the trip only one week earlier. She packed her bag that day. 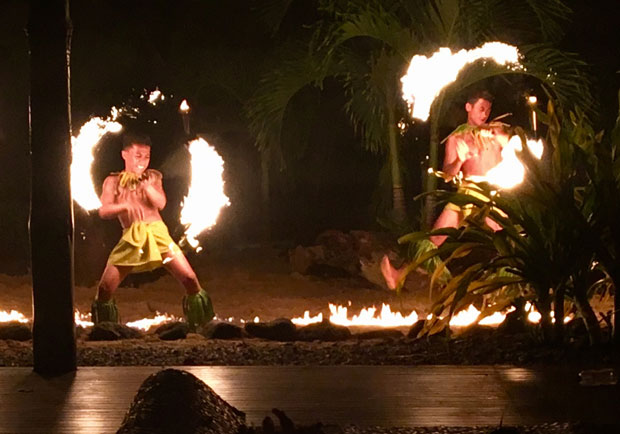 I was excited too because it took up a week of the school holidays – a time invented by teachers to punish parents for sending them our little darlings on a daily basis.
It was my third trip to the Pacific paradise, having first visited in 2015 to cover the All Blacks rugby test in Apia for TV3. My wife came too on that trip. While I worked, she sat beside the pool.
That seemed to be a template for this trip also as she sipped cocktails on a lounger while I was a jungle-Jim for the girls to dive off and swim under. While the wet welcome continued for most of the week, there was plenty of sunshine too and it was so deliciously warm that we were seldom out of the pool or away from the beach.
My wife and I had returned to Samoa last year, having fallen in love with the country, the people and the Saletoga Sands Resort – to which we returned with the girls in tow this time.
We were treated like long-lost friends to the bemusement of the girls. But by the week’s end they realised it wasn’t us who were special, but the Samoans.
“The people are so friendly,” the girls’ would proclaim several times each day. 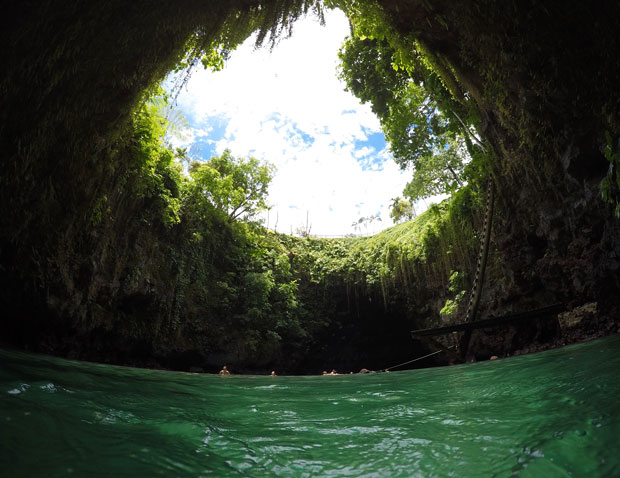 Their highlights were the famous To-Sua Trench and the nearby rock pools and caves where the resort’s guide, Sili, showed he is part-man, part-fish. And they loved the trip to Namua Island where turtles buzzed the dinghy on the short ride across and back, and the snorkelling – straight off the beach – that revealed a rainbow of fish within the coral.
They seemed to revel, too, in the barefoot walk up the hill on Namu’a. It was a steep climb and left their parents – quite a way back – huffing, puffing and drenched in sweat. The girls just danced over roots and rocks in the way only kids can.
It was the same when we walked up Mt Vaea, where the Scottish author Robert Louis Stevenson is buried. By the time I joined the girls at the summit I could have easily joined him for a bit of a lie down.
“Are you ok?” the eldest asked with what I mistook to be care in her voice. “Because there’s no defibrillator up here if you’re not.”
Saletoga Resort’s fiafia night – an evening of song, dance and fire twirling – was superbly done but drew unfair comparisons between the athleticism, coordination, bravery and stomachs of the young, fit lads who were part of the group – and my daughters’ aging father.
We ventured into Apia, a trip I was looking forward to because on both previous visits I’ve bought a pair of jandals that, at ten tala (about $5.50) are without question the best jandals I’ve bought anywhere. I’m onto my third pair and have two more, untouched, in reserve.
It’s just as well they’re so cheap because the girls fleeced me in the shops with a bewildering display of shopping.
They’d cottoned on to the fact that no single purchase is ever ‘that expensive’ and used that to shroud the number of things they bought (well, I paid for them) as we wandered around the small CBD and through the market. It’s the same argument I used in the evenings when Saletoga’s three-hour happy hour reduced the price of the local beer to about $3 a bottle.
Both events leave you with a bit of a sore head.
There was, of course, the need for the ubiquitous hair braids that, at five tala a braid, seemed ok to me till the girls returned, smiling, with a full head of them. Still, they looked snazzy and it did take two hours for them to be done which meant I could snooze in the shade beside the pool, undisturbed. It’s a price I was happy to pay.