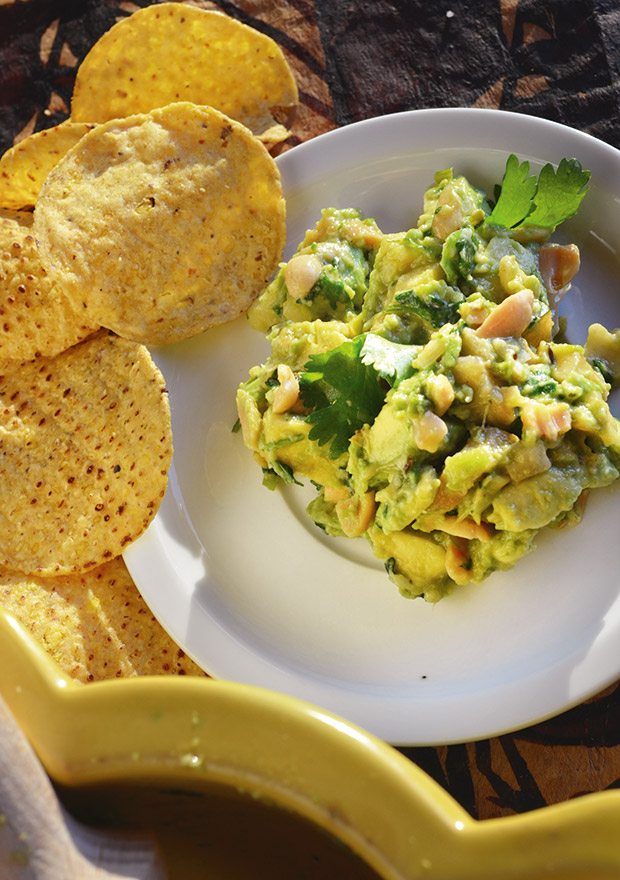 Fresh feijoa adds a hint of tang to this flavour-packed guacamole.

This recipe is inspired by Roberto Santibanez who makes guacamole with a twist in his cookbook, Truly Mexican. The feijoa adds a nice tangy bite to the guacamole without overpowering it.

Mix the feijoa, tequila and lime juice in a bowl and let the mixture stand for 30-60 minutes.

Heat the oven to 180°C. Spread the pecans (or peanuts) on a small baking tray and bake until golden and fragrant.

Add the butter to the pan then the nuts. Toss to melt the butter and coat the nuts. Sprinkle with salt, again tossing to coat. Remove from the heat.

Char the chilli in a hot heavy frying pan until tender and blistered all over – this may be best suited to a barbecue as it will release hot fumes. Once cool enough to handle, chop the chilli coarsely, taking out the seeds if you don’t like your guacamole too hot.

Mash the chilli, onion, salt (the coarseness of the salt will help you make the paste), and 2 tablespoons of the coriander to a paste in a mortar. Alternatively, you can mince and mash the ingredients together on a chopping board with a large knife, then transfer the paste to a bowl.

Score the flesh in the avocado halves in a crosshatch pattern (not through the skin) with a knife. Scoop it into the mortar or bowl. Toss well, mashing the avocado coarsely with a pestle or fork – you want to keep the avocado chunky.

Gently stir in the feijoa mixture and most of the pecans/peanuts, until it’s just holding together. Garnish with the remaining pecans or peanuts and coriander. Serve immediately with tortilla chips.