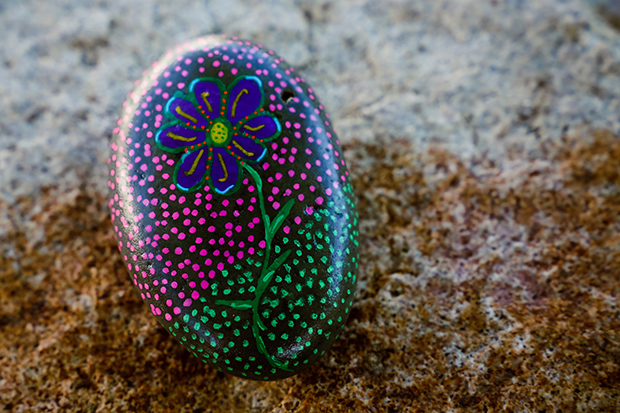 This new pastime is rocking the worlds of Kiwis of all ages – and sparking joy stone by stone.

Rock hunting is spreading throughout the country. Children can be spotted in public places at all hours of the day, searching under bushes, enjoying their new hobby. Sometimes parents get caught up in the expeditions, on which any disappointments are quickly dispelled by the thrill of a find.

The activity, which taps into the need for positivity in an uncertain world, comes with its own language. There are ‘rockers’, ‘painters’, ‘hiders’, ‘rock drops’, ‘rock hunts’, ‘rock pals’… These are just some of the terms connecting Kiwis with little acts of kindness that see people painting (usually with something colourful, such as a butterfly, cartoon character or mandala, or maybe a positive message) then hiding rocks. Recent trends include ‘quilt rocks’, which are divided into sections to which people contribute their own designs.

The novel idea began in the US and has rocked around the world. The philosophy is: ‘Take one when you need one, share one with a friend who needs some inspiration, or leave one for another’.

THE THRILL OF THE CHASE

It’s two years since she first heard about the craze, but rock hunting and painting now takes up a lot of her time, along with bringing up her seven-year-old daughter, Katherine, and two-year-old son, Max. 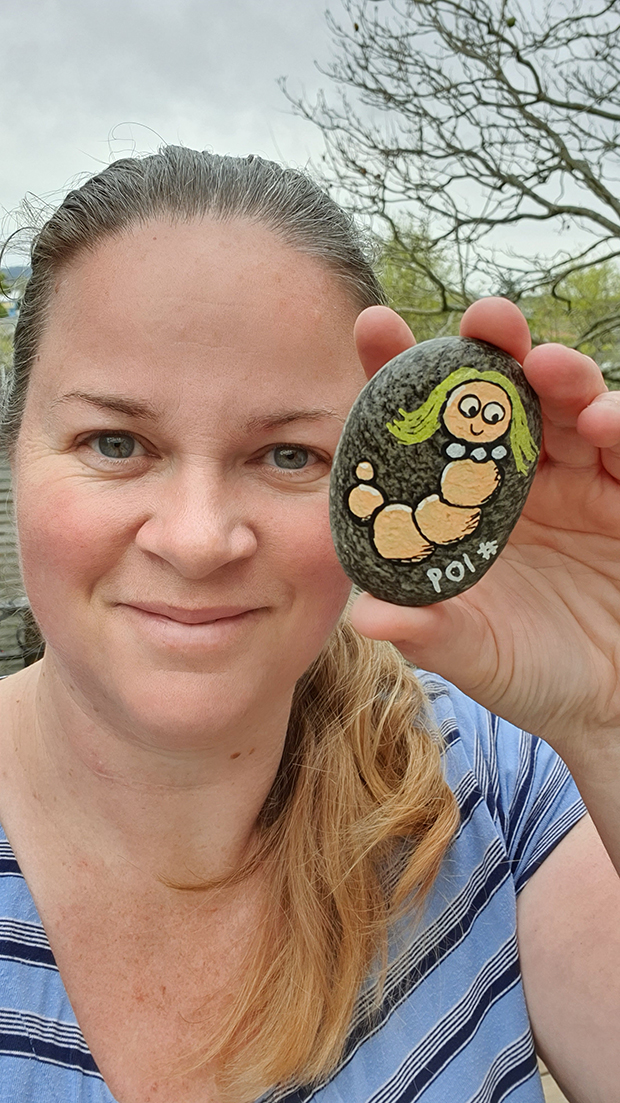 It all began when Rachel’s mum, Bev Foreman, who lives near Taupō, sent her a couple of rocks she’d painted and asked her to hide them. “I thought she was a bit weird,” says Rachel. “When you think about it, drawing a picture on a piece of rock, then sticking it in the bush somewhere – what’s the point?”

Rachel says her husband gave her a funny look when she told him what she was off to do. Nevertheless, “We started hiding them – but didn’t find anything for two months.”

Undeterred, she joined the local rock group, one of dozens throughout the country. “One of the ladies gave us some tips on how to find them, and then we found our first one, a rainbow rock,” says Rachel. “We replaced it with a red ladybug.” They found a couple more and shared their pictures with a Facebook group. Before they knew it, the hobby had become addictive. “A couple [of rocks] came home [with us] but then we’d go out and hide others,” says Rachel. “On weekends, we’d go together, and then I’d sneak out by myself during the week.”

More stories you might like:
Thinking caps on: Offcut's hats made from upcycled fabric bring sustainability and fashion together

A bonus was that the activity gave this rocker an excuse to go for a walk. “It’s a weird feeling, but it got us out of the house a lot more than what we otherwise would have,” she says.

Some days, the family would spend two to three hours at the Botanic Gardens; they were walking four to five kilometres every weekend.

“Katherine didn’t whinge… she didn’t realise how far she was walking as she was stopping to look behind trees, watching the bees, learning about plants… When Max came along, we were going four or five times a week to the gardens, and frantically making more rocks each night.”

The artwork doesn’t need to be elaborate to appeal to children, says Rachel. They simply love the joy of the find.

She warns, though, that there can be phases of disappointment, but hearing the excitement in a child’s voice when they call out, “Found one!” makes it all worthwhile. The former admin manager admits it’s a quirky community. “You do it out of your own pocket, in your own time, to bring joy to someone else… but it costs next to nothing.”

Not everyone paints their own rocks – some people contribute by hunting and hiding. Hiding rocks can be as rewarding as finding them, says Rachel, who has identified two distinct groups.

“There are people who don’t have kids who predominantly paint to hide the rocks, so their enjoyment is obviously in the making of them and being able to follow them online when people share them.”

More stories you might like:
From the United Nations to a back-to-nature apothecary, how grief helped Georgina Langdale find her path Rocks can pop up all over the place. As long as there’s a hashtag on the rock, it can be traced, and it’s exciting when someone finds one from another country or when a rock from New Zealand is found overseas.

“One of Katherine’s first rocks made it to the UK in a week,” says Rachel.

The second group is families who make an afternoon of it while their kids go on a rock hunt. The parents grab a coffee, then chill out and watch the kids hunt.

There are no rules and rockers have different methods. Some find and hide as they go, while others collect as many as they can before choosing a couple to take home and re-hiding the rest. Unfortunately, some people boast on Facebook groups about filling their pockets with rocks that the community never sees again. “But most rockers are more courteous and realise more people are coming along after you.”

Rachel says there are several places in Auckland where hunts can take quite some time, so it’s worth taking a packed lunch. She has collated lists of top spots around the country, which are available on Rocks New Zealand.

“A lot of the enjoyment is in finding one… they pop up everywhere,” she says. The only rock Rachel found when she wasn’t actively looking had ‘NZ Police’ painted on it, with the words ‘Look for cars’. “Everyone’s getting into making things,” she says. “People are loving learning how to do stuff again, rather than just googling if they don’t know.”

In February, Rachel changed the focus of her online business from the craft of crochet to rock painting. Her frustrating experience of using Sharpies for her first rocks led to a web search to find special pens that didn’t cost the earth and, as a result, her new website Arty Farty was born.

“You don’t realise how many people paint rocks around New Zealand,” she says.

Unlike most rock-related Facebook groups, Rocks New Zealand is public, so anyone can search for their hashtags if finders take photos or list the hashtags of their finds. Rachel recommends rockers join their local Facebook group as well, especially if they’re looking for tips on good sites for rock hunting.

“Anyone can draw on rocks,” she says. “And there’s something quite special about hiding your art. Sometimes you keep them until you’re ready to let them go.”

Paint & pens: Pick up some Resene test pots (three colours are enough to get you started with a mandala) and Posca pens (available at most stationery stores).

SUPPORT THE ROCKHOPPER WITH ROCKS Rockhopper Rocks for Bird of the Year.

The Bird of the Year competition is October 28- November 10 and Rockhopper is competing to be New Zealand’s favourite bird (vote at www.birdoftheyear.org.nz). Spread the word about bird conservation by painting and hiding rockhopper penguin rocks around New Zealand. See our Facebook event here,

HOW TO TAKE PART
Decorate a rock as a rockhopper penguin (don’t forget the yellow eyebrows!) Write the words ‘#Rockhopper birdoftheyear’ so people can identify the page. If you have space you might like to write a conservation fact on the back of the rock. See here for ideas.
Hide your rockhopper rocks around New Zealand – for hiding place ideas visit the page of your local Rock Group or Rocks New Zealand. Don’t forget to vote for rockhopper when voting for Bird of the Year opens www.birdoftheyear.org.nz

FOUND A ROCK? Share a photo on the page and then hide it for someone else to find.

You can do your bit to help the endangered Rockhopper penguins by casting a vote for them in Forest & Bird’s Bird of the Year competition here (Voting runs from October 28- November 10 2019).