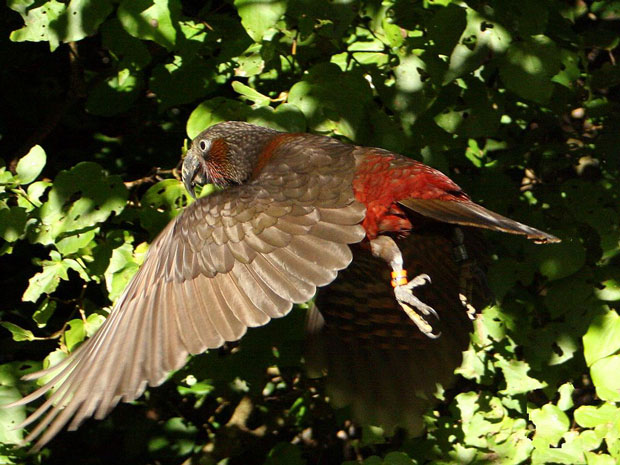 The kākā is vying for your vote in Bird of the Year. We share seven reasons why this gregarious parrot deserves to be New Zealand’s top bird.

Endangered kākā are high fliers of the parrot world. These arboreal sweet-tooths feed on nectar, fruit, seeds, sap, and honeydew at the canopy level of the forest. Their greatest threats come from deforestation and competition for food from possums and wasps. This is a Kea, not a kākā

HOW TO TELL THE DIFFERENCE BETWEEN KEA AND KĀKĀ
The kākā is a similar height but weighs less than the alpine-dwelling kea and has olive/brown feathers and scarlet plumage under its wing. The kākā’s beak is thicker and shorter than that of the kea. It scrapes bark from trees and cracks open nuts and seeds whereas kea feed on grubs in wood. CHATTERBOXES
Kākā are social birds, and often flock together squawking together in the early morning and late evening. They used to be as common as sparrows and Māori referred to them as ‘gossips’ due to their large chattery congregations.

SUN LOVERS
Kākā are mainly active during the day and awake at night during fine weather or a full moon.

More stories you might like:
Everything to do in August to keep livestock healthy (hint: get those vaccinations, buy calves)

WHERE TO FIND KĀKĀ

The North Island kākā can be found on offshore islands, such as Little and Great Barrier islands and Kapiti Island. They are now a common sight in Wellington after their release at Zealandia sanctuary in 2001.
The South Island subspecies can be found in Nelson, down the West Coast to Fiordland, and on Stewart Island, Ulva Island and on Codfish Island. THE CAPITAL LOVES KĀKĀ
Wellingtonians might be showing kākā too much love! Kākā numbers in the capital have been on the rise, but many juvenile kākā are falling victim to metabolic bone disease, after chowing down on bread and crackers left outside by well-meaning Wellingtonians. Kākā like to eat tree sap and nectar — the safest way to attract a kākā is to plant a native tree in your backyard or leave out dishes of water. Show your love for kākā by voting in the bird of the year competition. 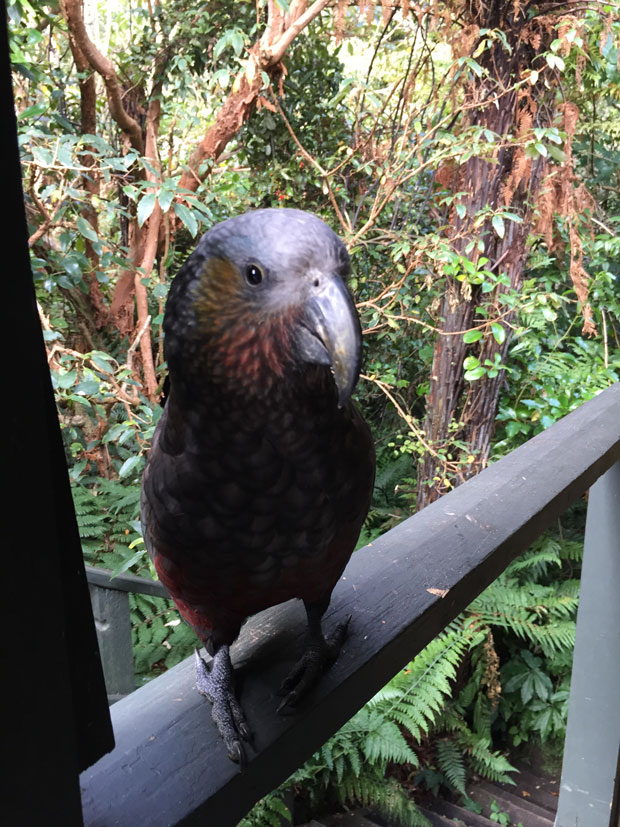 NZ Life & Leisure are honoured to be the champion of the kākā for Bird of the Year. We fell in love with the kākā when visiting Stewart Island and Ulva Island when researching our travel annual, The Insider’s Guide to New Zealand. Hoppy the kākā stars in the 2018 edition, out November 27. The cheeky regular at Observation Rock Lodge was nursed back to health by owner Annett Eiselt, and now refuses to leave.