The best way to cook mushrooms (even pink ones) 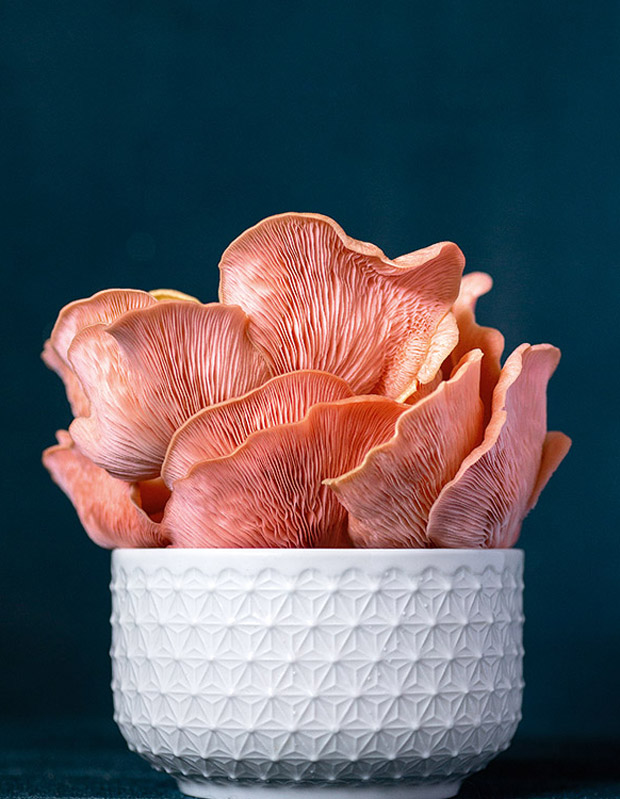 It’s time to join the great shroom-boom and learn how to cook this highly controversial vegetable the right way.

A 2014 study explored the flavour-enhancing properties of mushrooms. It found blending finely chopped mushrooms with ground meat enhances a dish’s flavour and nutrition. A team of chefs and culinary experts also shared their tips for cooking mushrooms.

2. Roast mushrooms to get a more sweet, salty, and umami taste with caramelised, nutty, buttery flavours.

3. Blend meat and mushrooms, 50-50. When cooked properly, mushrooms take on the texture and consistency of meat. A 50-50 mix of mushrooms and meat lowers the sodium level in a dish by up to 25%, and you get a more ‘meaty’ flavour. For the best results, chop mushrooms to match the consistency of the meat.

4. One-pan cooking (great for tacos, pies, pasta sauces): brown meat in a pan until cooked through, remove and set aside. Add chopped mushrooms to the same pan, sauté, then return meat to the pan to complete the recipe.

5. Create a mushroom base (ideal for burgers, meatballs, meatloaf): roast or sauté mushrooms ahead of time to intensify the flavour and then finely chop to add to ground meat dishes.

Kimi and Zane from Good Vibes Fungi eat a lot of mushrooms, but never more so than during lockdown. They tried to eat the crops they had ready for market, so they didn’t go to waste but admit they eventually got mushroomed out.

“Our go-to is pan-fried, on some sourdough with smashed avo, microgreens, and a yummy dressing,” says Kimi. “But they go in everything, they’re good in curries, risottos, on pizza. Some of the phoenix mushrooms are so big you can use them as a burger patty.”

To encourage people to try them at their farmers’ market stall, Zane uses his simple, special cooking technique that makes their pinks crispy and gives them a bacon-like taste. 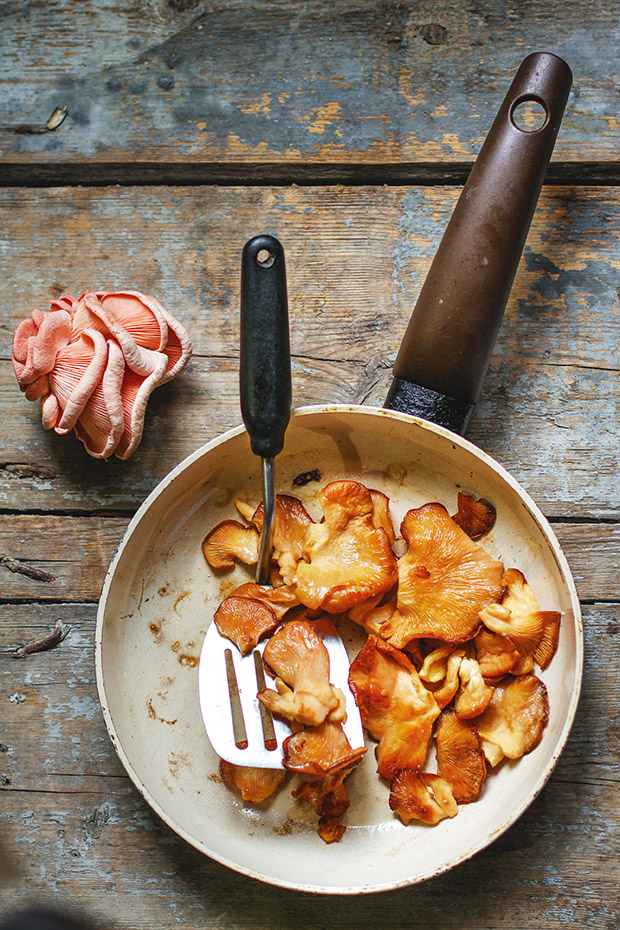 Pink mushrooms turn white when cooked, and crispy gold if you fry them the right way.

Have the pan on a medium heat, and add butter or oil. Place the mushrooms in the pan and then leave them – don’t move them at all – and season with salt and pepper.

Cook for 5-7 minutes, then flip them and cook for another 5-7 minutes – again, don’t move them around. “You get this crispy, dry, fried mushroom and they’re sensational.” Kimi also dries their mushrooms, processes them into a powder, and mixes it with salt to create an umami seasoning she sprinkles over roast vegetables. Another option is to crumb them. Dip in flour, egg, then breadcrumbs, and deep fry.

“You can eat them raw, but we don’t,” says Zane. “It’s too much of an intense mushroom flavour. “Also, to absorb the nutrients and get the benefits from them, they do need to be heated. It’s almost like a waste not to cook them.”

THE PRETTIEST PIZZA IN PINK

“My first flush of pink oyster mushrooms didn’t flourish. I’m a chronic over-feeder/over-waterer, so that may have had something to do with it. But I persevered, and I got to pick the second flush.” 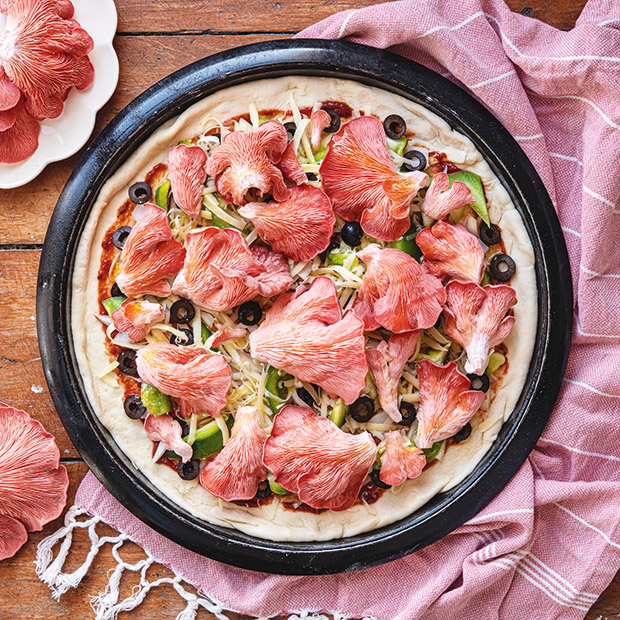 As a first-time mushroom grower, she says she felt conflicted. “I find them strangely enchanting and at the same time, horrifying.” She went with enchantment and created this stunning vegetarian pizza: green capsicum, black olives, onion, cheese, topped with pink oysters.

“This sounds strange, but the pink oyster mushrooms taste surprisingly meaty. I baked these at high heat, so that would have affected the texture, giving them more bite. So um… meaty, almost like ham. I bet you could make a great Hawaiian pizza using these mushrooms and pineapple. Delicious!”

This is Genie’s pizza before it went into the oven. When cooked, pink mushrooms turn white.