A block in Raglan that started with very few prospects is now one of the most wish-listed places to stay on Airbnb.

There’s no power, no phone lines, and no cellphone coverage. It’s hilly to steep, mostly covered in trees, and ends at a cliff-face. The grass quality isn’t great, so there’s no point grazing stock, even if its vegetarian owners wanted to.

But this block just southwest of Raglan is a profit-making venture for Tara Wrigley and Guillaume Gignoux, thanks to hard work and a little serendipity.

They run Tiny House Escapes, with three unique accommodation options. There’s the LoveNest, a little cabin at the top of the property surrounded by a pine forest; the LoveBus, a converted bus that sits in a paddock with expansive ocean views; and the Treehouse, one of the most wish-listed places on Airbnb NZ. 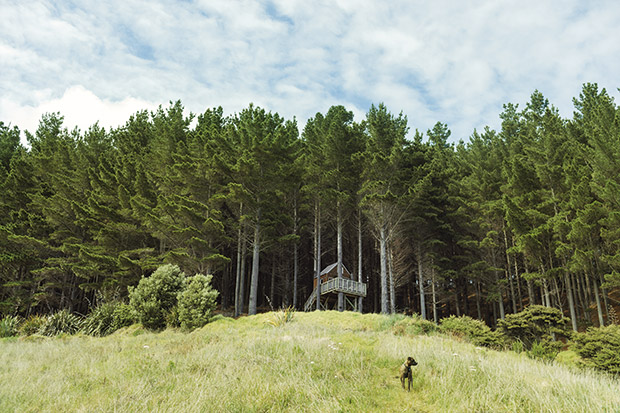 The treehouse sits 6m off the ground at the front, on an engineered platform.

There’s always a lot of love in the air. Tara says they have near full occupancy in the warm seasons – “a bit less busy” over winter – with guests mostly escaping the city to celebrate romance, birthdays, anniversaries. Every so often, there’s a wedding proposal.

Love wasn’t Tara’s first feeling about the block, the off-grid bus, and the compost toilet she found when she moved in with Guillaume (pronounced Gee-um) back in 2013.

“I really hated it here for the first couple of years! All I could think is ‘what are we doing, we’ve got no money, we can’t afford this’, but creating this little business made me fall in love with it. Seeing the joy it brings to other people – it gives me quite a lot of joy too.” 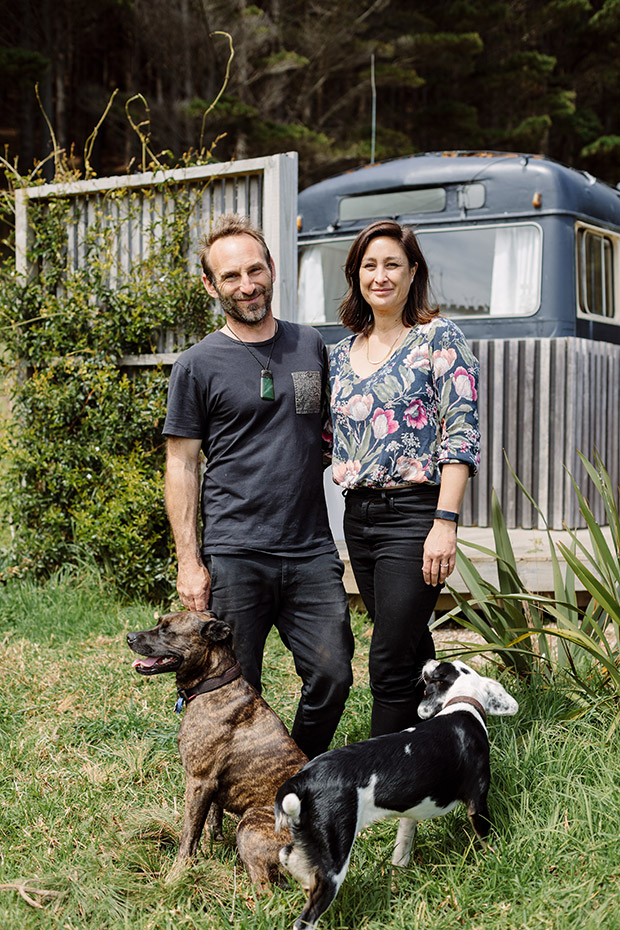 Tara Wrigley and Guillaume Gignoux. All the accommodation is behind the family home, so usually they never see or hear their guests.

The couple started from scratch.

“It was completely bare, no power, no driveway, no anything. We built a house, but we had no money so we couldn’t afford to build the amazing accommodation we have now.”

They found it hard to make ends meet managing such a large piece of land (Tara works from home in IT, Guillaume is a tennis coach in Hamilton). “There’s all of that extra stuff you don’t get in a normal house, like maintaining the driveway (all 800m of it), so initially (the accommodation) was to get a bit of extra money coming in.” 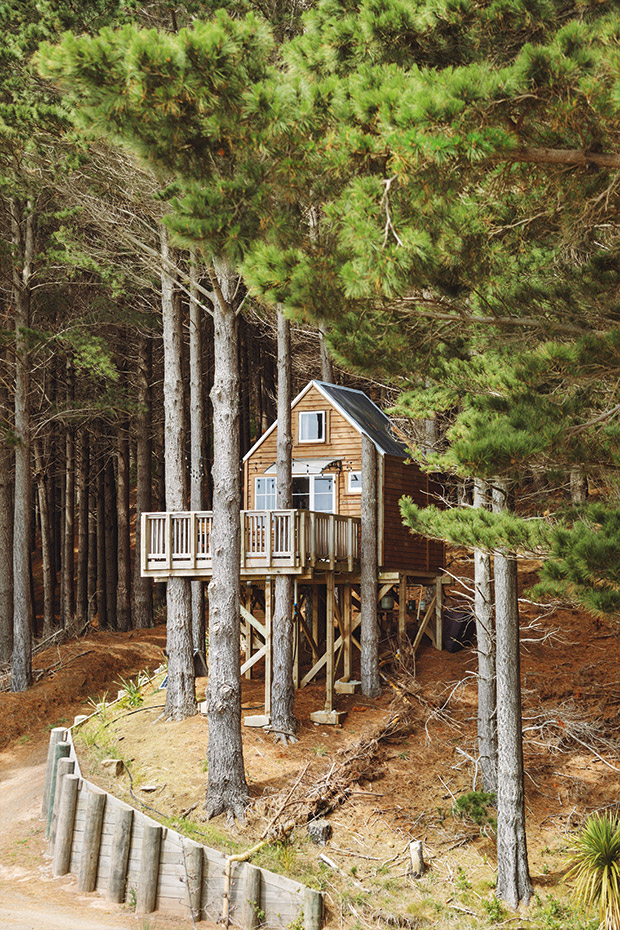 The tree house is a kitset cabin, sitting on a platform built within a copse of pine trees.

Their first step was converting the bus into something people would want to stay in. The LoveBus sits on a hillside above the house, with views down the valley to the sea.

“We thought we’d fix it up a bit, put it on Airbnb, and see how it went, and people absolutely loved it. It was cheap and a bit grungy, but people loved that they were surrounded by nature and it was so private. We’ve since given it a full renovation putting a lot of thought into the interior design and the flow to the outdoors. It’s such a great space.”

Next, they renovated a small cabin built by a friend who had co-owned the property for a time. They called it the LoveNest because it was nestled into the trees and surrounded by birds, and it was another hit. 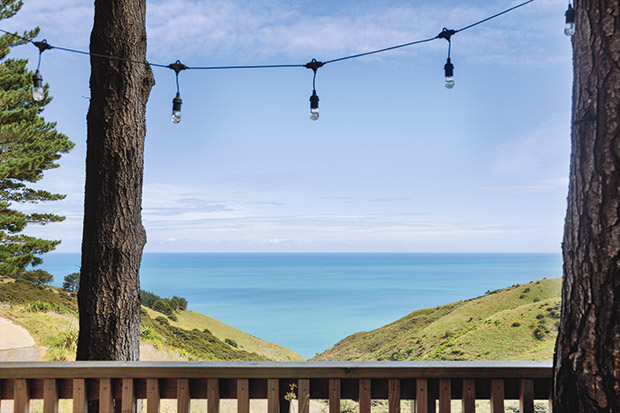 They also had an idea to build a treehouse, but it took a bit of serendipity to make it happen. Tara still marvels that the right person turned up at the right time. “We had a couple email us to ask if they could come and do some woofing (volunteering in exchange for lodging/food). The guy was a builder, and it turned out he’d actually built treehouses in England, so he helped us get the platform set up.”

The treehouse sits 6m off the ground at the front. To ensure its safety, a structural engineer designed the piles and frame. They bought and built a small kitset cabin to sit on the platform. “It has worked really well because people just love that whole thing of being up in the pine trees, and it also has a great ocean view.”

If you hold your breath and your phone the right way, you can connect to the satellite wifi, but mostly people are in seclusion from the moment they arrive. They love it, says Tara.

More stories you might like:
David Walshaw knew nothing about horticulture when he traded city life to grow olives

“Our house is near the front of the property. The accommodation is all behind us, so when we’re home, we don’t know and can’t see if people are there. We never have to disturb them, and they never really need to come to us either – we usually never even meet people! – so it keeps everything private. They let themselves in when they’re ready, so we’re not committed to being here at any time, and they check themselves out.” 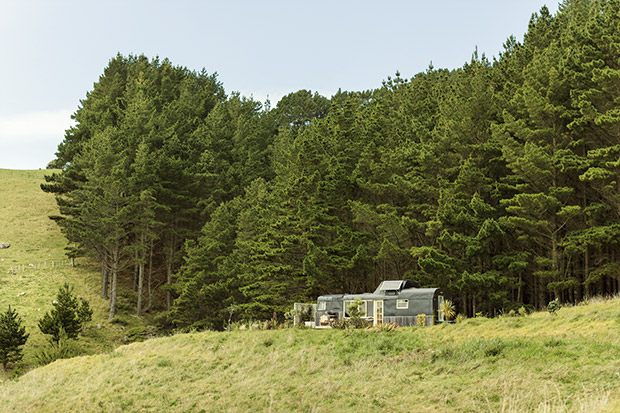 The house bus was Guillaume’s original home on the block.

The cabin, bus, and treehouse all run on solar power. “There’s a little chilly-bin fridge in the bus and treehouse, they all have little solar lights, the hot water is supplied by gas califont, and then we have a separate septic tank system for each one. I could never get composting toilets to work so we’ve got fully flushing toilets in each of them.”

THE SECRET TO MAKING IT TO THE TOP OF THE WISHLIST

There’s never been a marketing budget for their business, so Tara says she and Guillaume can only speculate as to why their accommodation – the treehouse in particular – is so incredibly popular.

“It’s really curious for us because there are so many amazing places on Airbnb, like really high quality, five-star hotel-like places, but it’s not that. I think it’s the uniqueness of it, the fact that it’s a treehouse, there really isn’t any or many on Airbnb – I haven’t been able to find any other actual treehouses like ours. The bus was renovated, and now includes a deck, and an outdoor bath.

“It’s also just 15 minutes into town and you have access to all the restaurants and cafes that you want, but I don’t think many people get to experience what it’s like being in the middle of nowhere where it’s so private.”

Their price point is another big drawcard. “If you want something really nice (on Airbnb), it’s $500 a night. Our prices are around $200-$250 or less sometimes, so we’re appealing to a wide range of people. I’ve noticed the range of different cars we have here is incredible, from Suzuki Swifts to BMWs, and then every now and then we get an Audi.”

More stories you might like:
How artisan brand Forty Thieves moved from market stalls to supermarket aisles around New Zealand

Weekends are booked out for months – some almost a year – in advance, but weekday bookings are also high. 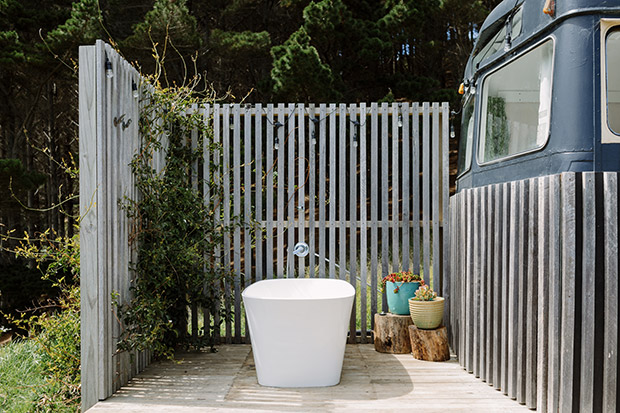 “It’s mostly people in their 20s and 30s, mostly young, adventurous kinds of couples who want to have an experience and do something special. Our guests are people who come to Raglan to stay at our accommodation – they don’t come because they need a place to stay in Raglan.”

It’s also a popular photo opportunity. “We have Instagram influencers coming quite often who want to get all the pretty shots for their feed. One guy came and did a video for us – he flew a drone over the property, and you can see the whole layout of the block.”

MAKING A CHALLENGING BLOCK WORK AS HARD AS POSSIBLE

The couple grows most of their vegetables in garden beds around their house, but that’s the only traditional production-oriented part of their block.

“It’s not even sand here, it’s clay. Even trying to grow trees of any kind is very difficult except for manuka and pine.”

But where farming people see steep terrain and poor soil, others see a fun challenge. The couple has created walking tracks around their block. One takes you through the bush, along the side of a stream, past a waterfall to a secret picnic spot next to an old puriri tree. You can also bring your dog (by arrangement). “There’s so much to do. We’re at the bottom of Mount Karioi, so there’s lots of hikes you can do, there’s surfing and mountain biking. You can go snorkelling at Whale Bay and Manu Bay if there’s no swell.”

Running such a challenging block as a profitable business has completely changed how Tara feels about the land. It has even impressed her ‘classic Kiwi’ dad.

“When we first got here, we drove down the driveway, which is quite steep, and his first thought was ‘gosh, this land isn’t good for farming’ because to my dad, if you have land, you have stock and steep bits of land are good for nothing. 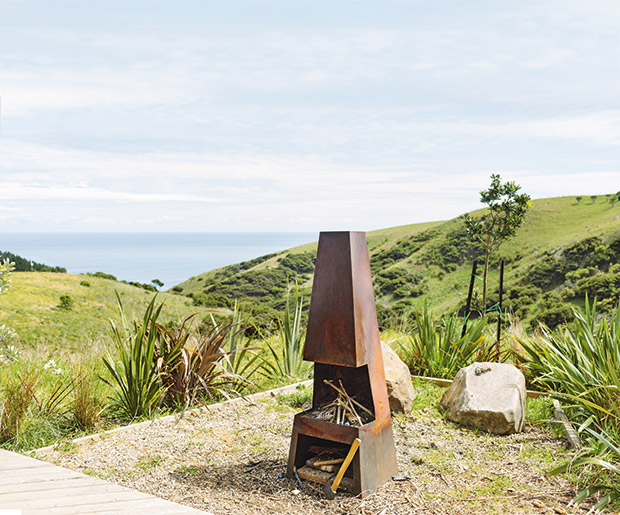 “He’s been really surprised at how successful we’ve become, and when he saw us on TV (in a story promoting Airbnb), I think he had a tear in his eye so that was nice, especially when he had such low expectations in the first place.”

Better still is that they can enjoy living in their valley paradise. “It’s just meant that we can sustain ourselves on this piece of land now – it’s fantastic from that point of view.”

6 lessons from a very tiny Airbnb