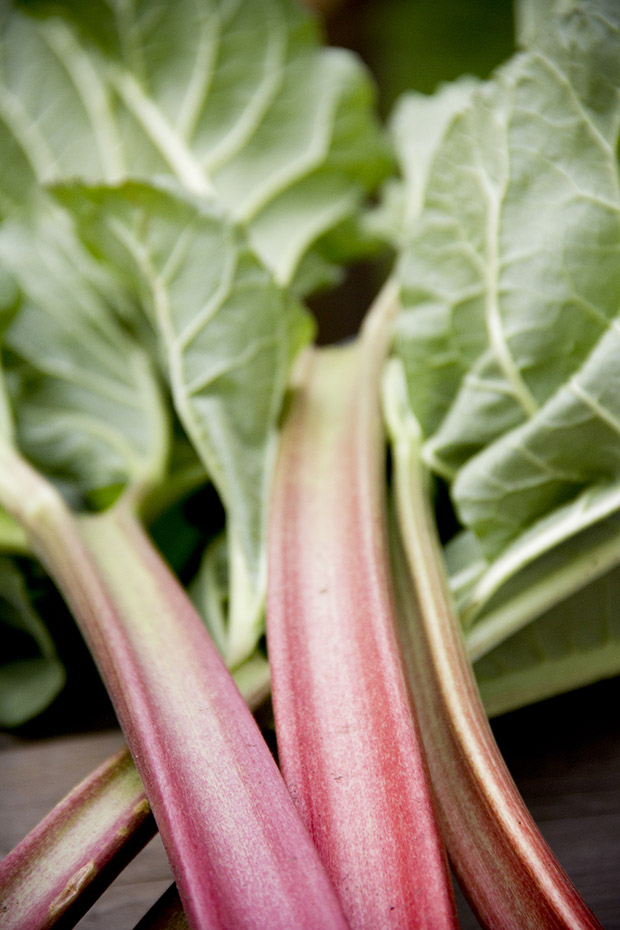 Everyone knows if you eat rhubarb you need to add a little sugar, but there is another way to sweeten the deal.

“Make something with rhubarb,” I said to my creative cook, husband Ken.

His first attempt was a sumptuous rhubarb and strawberry cake that was so good we demolished it in a day. We were well into the second when he mentioned in passing he’d forgotten to put the baking soda in which would account for it being a little dense.

Many people avoid using rhubarb because they think it needs too much sugar to sweeten up the dense, sour taste. This delayed its uptake into the kitchen until 100 years ago when sugar became more affordable. Ken circumvented the sugar problem by adding the sugar reducing herb, sweet cicily (Myrrhis odorata).

For years rhubarb was under-valued in our family garden, languishing untended by the compost heap. Now and then we cooked it up, usually when the ‘better’ fruit ran out.

But rhubarb’s days as a poor man’s fruit are over. Mouth-watering recipes can be found online and they feature rhubarb in just about everything: desserts, drinks, wines, soups, salads, and main menu dishes of pork, chicken, lamb and fish.

Rhubarb makes delicious jams and jellies, and bulks up fruit without diluting flavour. The rich sweet-sour combination makes it a standout in crumbles, cobblers, tarts and cakes, especially when complemented with apple and berries.

In the garden, with a little TLC, rhubarb forms a handsome perennial ground cover with large, luxuriant leaves and you get the bonus of tasty leaf stems for culinary and other uses.

Nutritionally, the stalks are rich in vitamin C, dietary fibre and calcium and – minus the sugar – low in energy with one cup of rhubarb containing just 26 calories. It’s also proven as a safe tonic for the digestive system.

WHY RHUBARB IS FULL OF CONTRADICTIONS

Rory Rhubarb was a comic character in one of our son’s favourite picture books when he was a toddler and just like rhubarb, Rory was full of contradictions.

For example, rhubarb can have quite different effects depending on how much you eat. Eat it in large quantities and Chinese rhubarb (Rheum palmatum) effects a ‘brisk healthy purge’ according to Mrs Grieve’s A Modern Herbal. However in small quantities it has the opposite action as an astringent tonic, useful in treating diarrhoea. The purgative effect is due to the presence of anthroquinines, while the astringent action is due to tannins and bitters.

But before you get too worried about rhubarb’s purgative properties, our garden varieties contain smaller amounts of active ingredients and are therefore only mildly laxative. It’s more likely rhubarb will stimulate the appetite and promote healthy digestion. 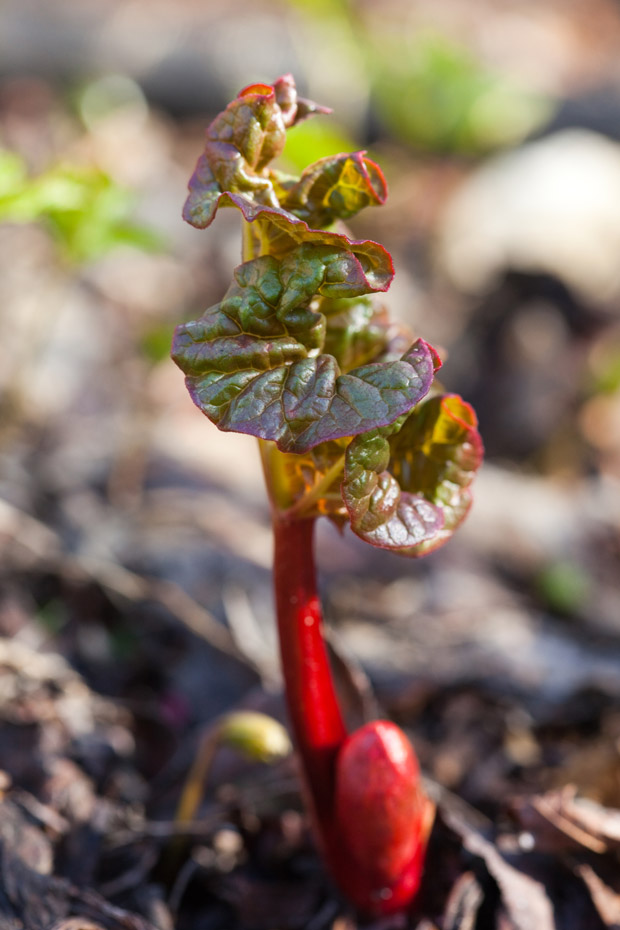 Another conundrum is that rhubarb is traditionally used as a medicine and a fruit, yet it is really a vegetable, a member of the buckwheat family (Polygonaceae) and a close relative of sorrel. Rhubarb has been a highly valued purgative herb in Chinese medicine for millennia, its earliest recorded use dating back to 2700 BC.

When it reached Europe in the 14th century, Chinese rhubarb was traded along the Silk road along with silks, satins, musk, rubies, diamonds and pearls, and was several times the price of saffron.

13 THINGS TO KNOW ABOUT GROWING RHUBARB

1. Rhubarb grows in its native habitat in north-east Asia in deep, rich, moist soils at high altitude. It will withstand drought but it doesn’t do well in the heat, preferring ample water in a deeply-worked, well-drained soil with generous amounts of compost.

3. In our temperate climate rhubarb is usually winter dormant, but you can force it by covering the stalks with an open-ended box or tube. The resulting early, etiolated (pale) stalks are especially tender.

4. Rhubarb can be grown easily from seed but this takes longer than root division, typically two years to harvest.

5. The faster way is to divide the established crown of a 4-5 year old plant, preferably in autumn or spring. Any piece of rhizome with roots and at least one good eye or bud will produce an identical plant to the parent. Use a spade to cut the rhizome between buds or eyes, discarding rotted or decayed sections.

6. Plant roots in an open site away from overhanging trees. If drainage is a problem, beds should be raised as rhubarb is susceptible to crown rot.

7. Clear all perennial weeds – they are difficult to eliminate later.

8. Dig a large hole (up to 1m deep) and incorporate generous amounts of organic matter, then plant with the crown bud 5cm below the soil surface.

10. Rhubarb crowns should be dug and replanted every 4-5 years to maintain vigour.

11. Delay harvest until the second year after planting to allow root reserves to accumulate. Rhubarb is usually harvested in autumn and spring when stalks should be firm – too late and they become tough and stringy.

12. Do not cut stalks but snap off at ground level with a twisting motion. Young pink stalks are sweeter than thick long green ones, depending on variety. Harvest less than a third of the stalks from one plant at any one time.

More stories you might like:
An expert's guide to the best trees to grow and the ones to avoid

13. Remove seed stalks as they appear.

THE THREE MOST COMMON KINDS OF RHUBARB

Rhubarb’s names are confusing. The genus name Rheum refers to many different species, which grow wild in the mountains of west and north-west China. Rheum is thought to come from the Greek rheo, ‘to flow,’ referring to rhubarb’s famed purgative properties.

The garden varieties, grown for their edible leaf stalks, are derived from Rheum rhaponticum and Rheum rhubarbarum. Hundreds of varieties are listed for commercial production but the most common seed-raised home-grown variety is Victoria which produces large, quality green and red stalks and is highly productive.

Medicinal Chinese rhubarb is derived mainly from the rhizome of Rheum palmatum, but also R. officinale.
R. palmatum is distinguished from garden rhubarb by its size and texture. The large rhizomes produce expansive, lobed, heavily-veined leaves, rougher to touch than garden rhubarb and hollow, jointed stems to 2.5m.

In favourable conditions its growth rate can be extremely rapid, as fast as 7.5cm a day.

“Rhubarb when raw is so tough And its leaves contain poisonous stuff, But when cleaned and de-soiled Dipped in sugar and boiled Then the stalks are quite tasty enough!” Peter W, UK

The leaves of all rhubarb varieties are poisonous, containing about 0.5% oxalic acid and should not be eaten under any circumstances. Symptoms of poisoning include:

Avoid using stems from frost-bitten plants as they can accumulate oxalic acid. Leaves are safe to add to the compost pile as the oxalic acid is mostly broken down.