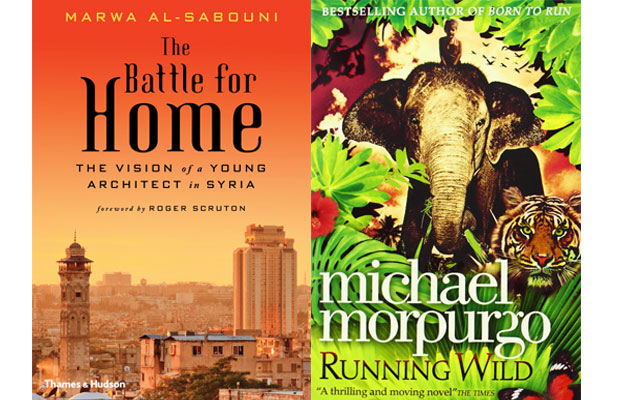 Miranda Spary reviews ‘The Battle for Home’ and ‘Running Wild’.

Can architecture change society? One book explores how a war-torn community has been shaped by its environment.

It’s always inspiring to read about people who don’t lose hope when things become really dire, and Marwa Al-Sabouni is a perfect example. She’s a Syrian architect who has stayed in her hometown of Homs throughout the conflict in her homeland. Her book “The Battle for Home” is partly a memoir, partly a history of the city and partly her philosophy about how architecture changes society.

It’s a beautiful book to look at and filled with her drawings of old Homs as well as her ideas for new precincts that will foster a sense of community and self-respect, instead of the brutal environments that were allowed to replace the historic areas.
Her stories about living in this war-racked city are fascinating, and it’s impossible not to admire her decision to stay living there with her husband and two children.
—-

Michael Morpurgo’s 2009 book “Running Wild” is just opening as a puppet stage play in London. Even though he writes books for children, there are few adults who have read “War Horse” or “Private Peaceful” without sobbing aloud.
“Running Wild” is no different. Based on the true story of a girl rescued from the Boxing Day tsunami by an elephant, Morpurgo makes his hero a boy called Will who has just lost his father in the Iraq war. The elephant Oona is the heroine, and this survival story is pure magic.

It addresses loads of big issues but in this author’s exceptionally capable hands, it’s done so subtly and effectively that the message about staying hopeful and protecting the environment and sticking to your principles even works on cynical old grownups.