If Sheryl Nolan could fit her 1960 Anglia 105E through the door of her Hamilton house she’d park it in her bedroom. “I’m quite sentimental about my car. My nana bought her brand new and drove her to golf and bowls in Taupō for 20 years. When nana died my grandfather drove her until he was 92. I’m very privileged to own her,” says Sheryl, reversing her two-door Dagenham-made deluxe saloon out of the garage and onto the street.

Sheryl bought the Anglia – named Dorothy after her nana – from her grandparents’ estate 34 years ago. The car had 32,000 kilometres on the clock, was in tip-top nick and has been centre stage in Sheryl’s life ever since. “The sense of family history makes her so unique and to think I’m only her second owner. I feel very lucky.” 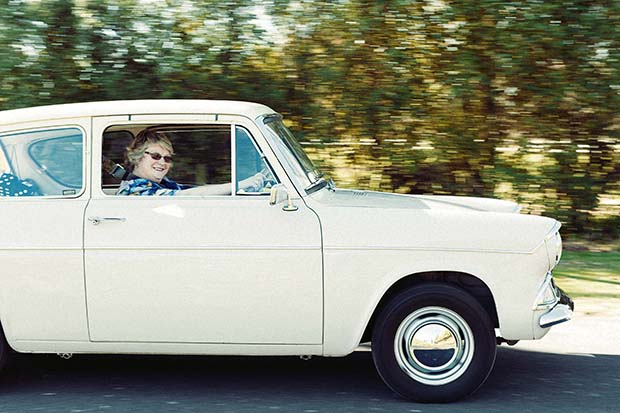 Over three decades Dorothy has been a daily runabout, a carrier of school children, a holiday tourer, a source of embarrassment for Sheryl’s teenage son Michael (“Mum, why do we have to go in this old car?”) and later a source of interest. “He wanted to put a V8 under her bonnet – not likely!” The car also played a starring role in Sheryl’s second-time around romance. “I was a nervous wreck on my first date with Tony – my now husband – but I was just as worried because I’d had to park Dorothy out of sight around the corner from the restaurant where I couldn’t keep an eye on her.” Two years later when Sheryl and Tony married there was no question over the bridal car, nor driver. Dressed in silk taffeta with a veiled pillbox hat, Sheryl drove Dorothy – decorated with white ribbons – to her own wedding. “It felt very special. I was actually barefoot but changed into my high heels at the church. Poor Tony had no idea he was taking on two girls when we married – Dorothy and me. At the reception I gave a speech and officially welcomed him into our marriage with a key for Dorothy which he promptly lost. But he’s turned out to be a great navigator.”
On a clear Waikato morning there is a momentary wheeze as Dorothy starts up but she’s soon idling. Heading across Hamilton’s hinterland Sheryl has the car sitting nicely at nearly 100 kilometres per hour and her 997cc four-cylinder engine producing 39bhp is on task. She now has nearly 145,000 kilometres under her belt. 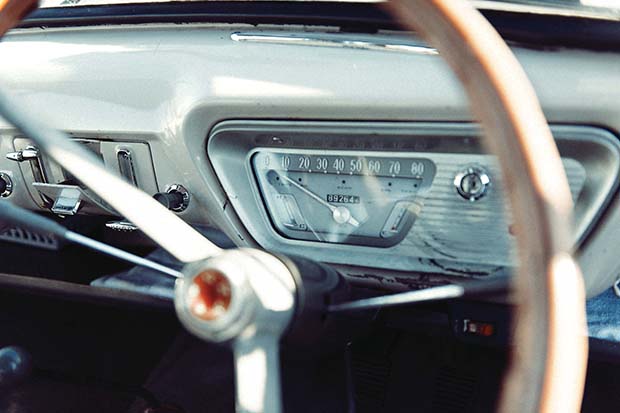 “The beauty is you can drive flat out and not exceed the speed limit. If pushed in the right setting – not on a hill climb – she can reach 80 miles per hour [nearly 130km/h].”
The first ever Ford Anglia was unveiled as World War Two was declared and its name embodies the fervent patriotism of the time – Anglia is the medieval name for England. But Ford’s 1939 debut model bears no resemblance to Dorothy’s dapper design. 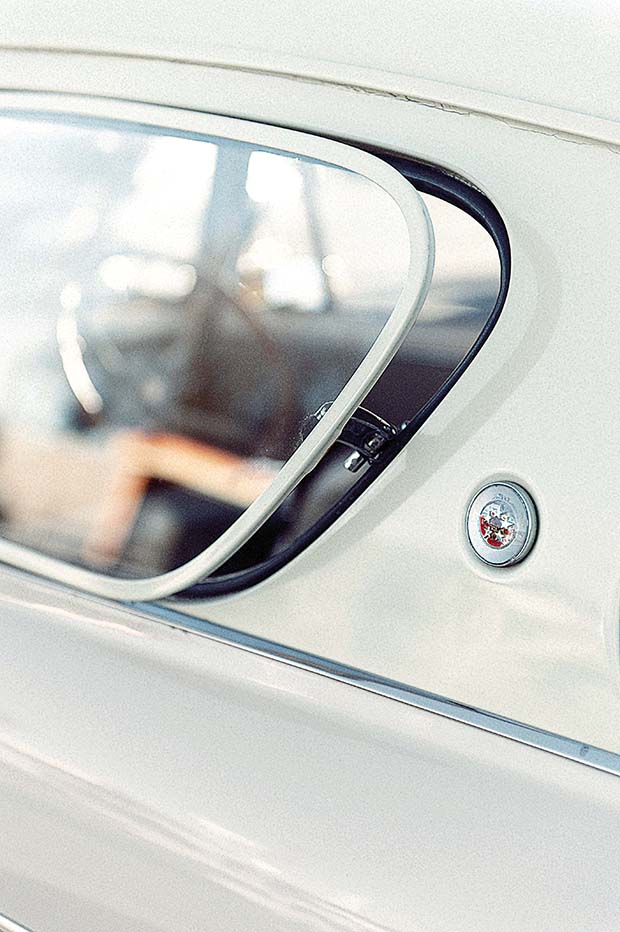 The Anglia 105E was conceived in the mid-1950s at Ford UK’s research and development centre in Birmingham. It was an American automotive designer with the Ford Motor Company in Michigan – Elwood Engel – who pulled its design out of the hat. Visiting Birmingham from the States he stamped suave American styling on the new small-sized British family saloon – its sweeping nose line, tail fins, body side chrome strips, reverse slope rear window and hooded headlights.

More stories you might like:
Owner restores the 1958 Morris 1000 that his grandfather taught him to drive in 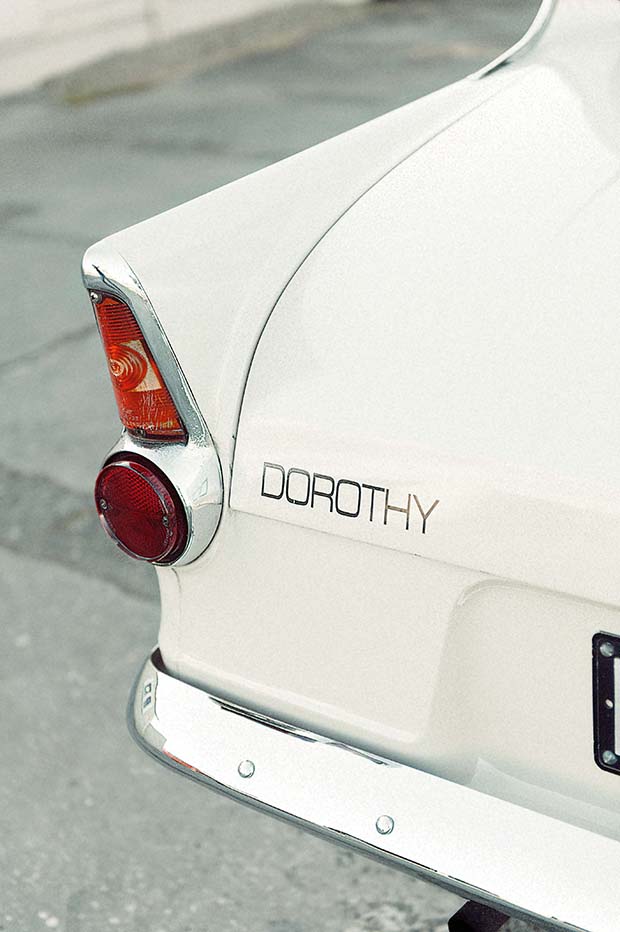 Launched in 1959 the Brits went berserk. It was a rakish-looking rival for the Morris Minor and, equipped with a reliable high-revving overhead valve unit and Ford’s first four-speed transmission, it delivered the mechanical goods too. The Anglia smashed the company’s volume production level – 200,000 sold in a jiffy, and more than a million during its seven-year production run.
On a semi-rural stretch south of the city, Sheryl’s little 56-year-old fin-tailed Ford shows no sign of slowing up. She’s tight on the road and huge fun to drive. Visibility is unimpeded, there is plenty of headroom, the MacPherson Strut front-suspension technology is in full working order and the manual four-speed gearbox with its distinctive spindly gear lever offers a smooth change up and down.

The heater performance is average (Sheryl carries blankets for Tony in the back), the vacuum-powered windscreen wipers don’t stop once they start (they were notoriously problematic in the Anglia) and the petrol gauge means living on the edge. “There’s no warning – you just run out.” 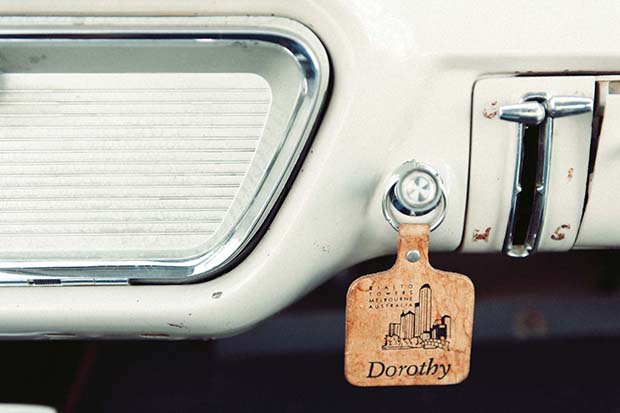 Dorothy’s maintenance record is largely rock solid. Twenty five years ago a spot of rust in the bottom of the driver’s door was swiftly dealt with. There’s been nothing since. “She had a repaint in 1994 and an engine overhaul in 1999. She has a bit of incontinence – the odd drop of oil – but really she runs like new. She’ll never cost too much – I enjoy her so much.”

About 20 years ago Sheryl’s mother suggested she pursue a hobby to provide time away from the demands of her busy hairdressing business – some of her clients have been with her for 40 years. “I did what Mum suggested – well, sort of, I didn’t throw myself into cooking or quilting – I joined a car club.”

More stories you might like:
Houseplant happiness: A beginner’s guide to transforming your house into an indoor jungle While Dorothy is now semi-retired she is always a contender for Hamilton Vintage & Classic Car Club runs; Tony on the other hand is no petrol head, he prefers golf and singing in a choir. “But we take her out together once a month and it’s always great fun. I use Tony’s brains – he’s a lawyer – and he uses my practicality. We go along very well. If it’s pouring with rain we use two little buckets alongside the passenger and driver seats to catch any leaks from the windscreen.”

But lousy weather could never dampen the joie de vive of a legendary lady. Dorothy has the number plate BT8734. “In my eyes the BT stands for Beautiful Treasure because that is what she has been to me.”