When Auckland’s  Phil Harris boarded a flight to Colorado in 2005, he had two bottles of New Zealand wine, a toolkit and hope in his heart. Forty-eight hours later the wine was despatched, the toolkit was under the hood and the snow-capped Rockies sparkled as he sailed towards a Los Angeles shipping yard in his dream machine – a 1962 Porsche 356B Karmann Notchback Coupé. 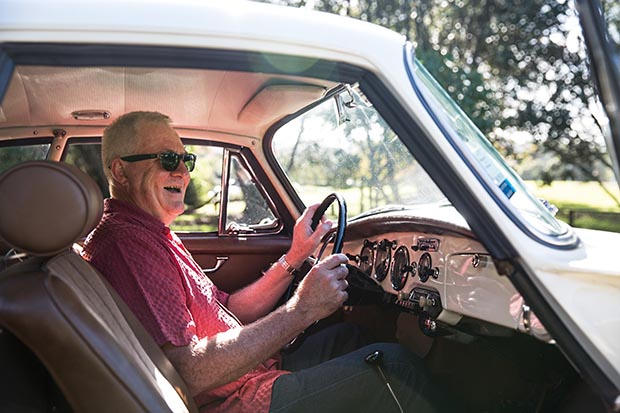 Phil’s international sortie to secure a deal on the rare left-hand-drive German-built gem was no flight of fancy. He’s been a Porsche aficionado since he wore shorts, and first admired the stylish 356 as a schoolboy visiting his father’s work.

“Dad loved cars too and he worked at a dealership which had Volkswagens. I can remember calling in after school and noticing a Porsche 356 parked out the back. They are so distinctive with their beautiful curves. There’s not a straight panel on the body.” 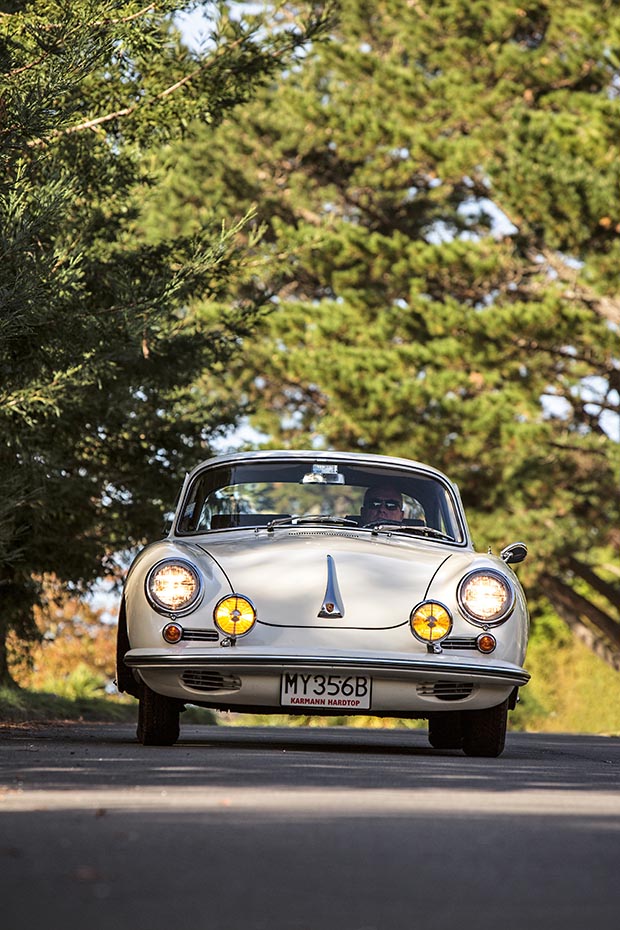 As a teenager Phil and his mates would roam the car yards on Great North and Greenlane Roads at the weekends, imagining the sportscars they’d love to own.

“If we were lucky, a salesman would let us have a sit behind the wheel, and that’s where I saw the 356 again.”

Heading down suburban North Shore roads 12 years after his deal in Denver, the magic of this rare 1.6-litre 75-horse-powered super Porsche hasn’t dissipated. “It still delivers the pleasure its designers set out to achieve six decades ago.”

Defined as a lightweight, nimble-handling, rear-engine, rear-wheel-drive two-door, Porsche developed the 356 in 1948 to add sportscar dazzle to post-war gloom. It was a snail’s-pace start – the first 356s were hand-built in minuscule numbers but a class win at Le Mans in 1951 ramped up its ratings.

More stories you might like:
Andrea Bosshard talks about filming her father Kobi Bosshard for the new documentary Kobi a Life Work

Production expanded through the 1950s, and on cessation in 1965 about 76,000 units had been manufactured. 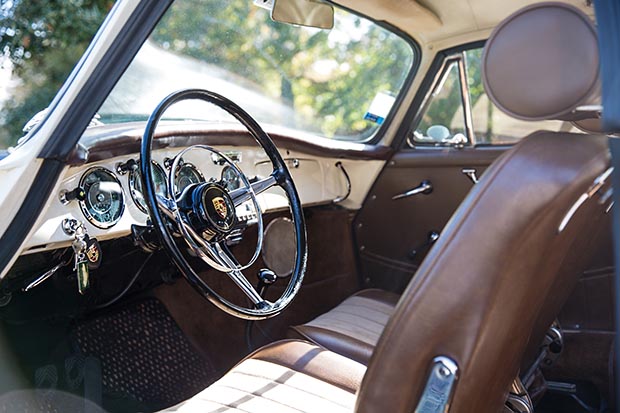 Phil’s distinctive variant – a cabriolet with a metal hard-top – built by the famous Karmann coach makers in Osnabrück, is one of only 1747 ever produced. He estimates five of those are in Aotearoa.

“It was designed as a luxury sportscar and while not hugely powerful it’s very responsive and comes into its own on winding, twisty roads. It’s great fun and easy to drive even though its beautiful, big steering wheel looks the right size to be in a bus.” On a mild Auckland morning this 55-year-old set of wheels is demonstrating plenty of pep, happily performing on the suburban hills and about town.

“It’s been beautifully cared for over the years. It had 93,000 miles [about 150,000 kilometres] on the clock when I got her but only 11,000 of those were over the past 26 years. The glovebox compartment was a little treasure trove of paperwork. The car was built for the American market and imported brand new from Germany to the showroom floor of a Colorado dealership in 1962.”

Phil is the fifth owner and he’s since made contact with two others. All four hailed from Colorado. Those exciting conversations revealed that the Porsche, although repainted and its front seats reupholstered in 1996, is authentic to boot. Furthermore, it’s in possession of matching numbers – an uncommon occurrence where all components are original and match. “It was never a daily drive, which explains its incredible condition. Along the way it was owned by a doctor and later two university students who apparently bought it with money allocated for fees – a year later their parents found out.”

Heading along Northcote Road, Phil talks about his past portfolio. His first car, at the age of 16, was a 1957 Volkswagen with nothing under the bonnet. The purchase was financed by an after-school petrol-pumping job; he helped paint a house to foot the bill for an engine. By the age of 17 he had joined a bank and was working weekend odd jobs to fund his vehicle ventures. 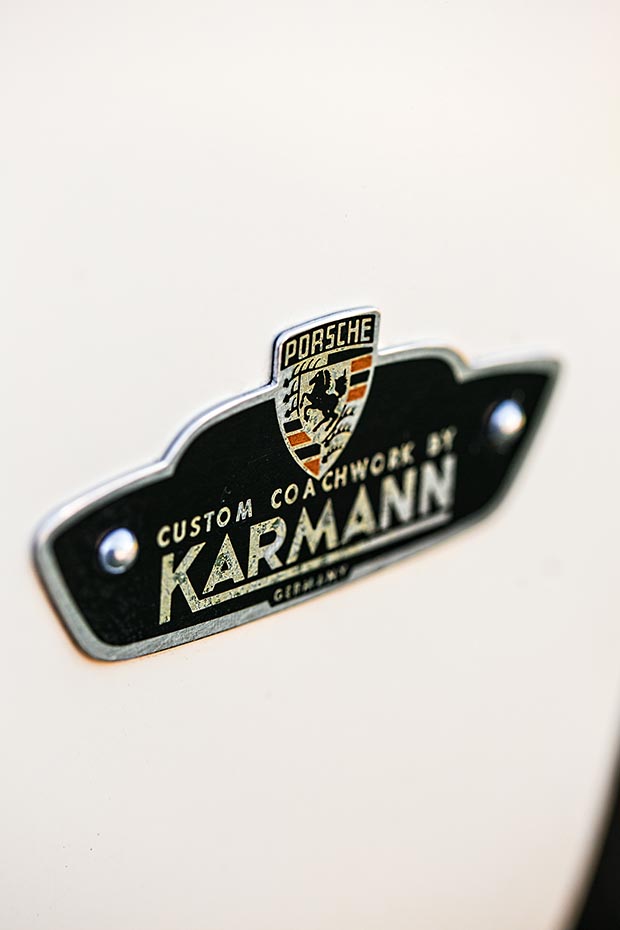 “My grandmother lived at Waterview. She was a great supporter and was happy for me to use her garage as a workshop. Dad was such a help with the mechanics. I’m okay with basics but nothing like him.” Yes, there is a man cave of miniature die-cast metal Porsches (and other) car models at his home. Yes, there is a substantial library of Porsche books in the spare room – the most treasured of which is Liebe Zu Ihm. This was published in 1960 and delivers endless pix of the 356, text in five languages and is revered as the most collectable Porsche picture book ever.

But Phil says there’s nothing better than being behind the wheel of his 356.

“I love exploring, touring for a few days with friends who are also crazy about classic cars, or taking a weekend drive – with coffee and cake en route.” 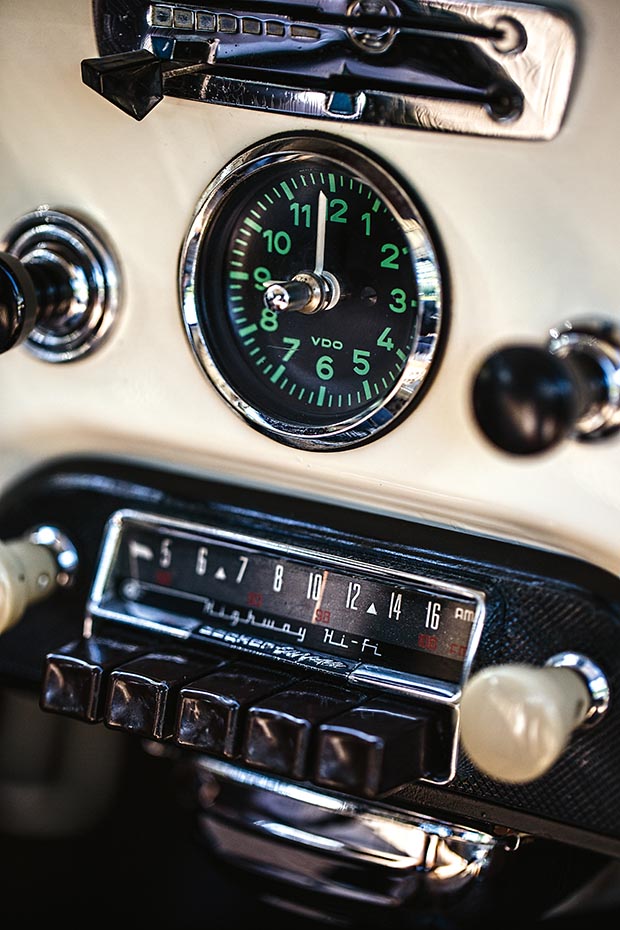 The 356 has never let him down – it’s super economical, safe, superbly built and its maintenance record is squeaky clean. Phil files all receipts and documentation. “I see myself a custodian – the 356 will outlive us all and it’s great to have its history chronicled.”

And there’s never a need to crank up the stereo when gunning those country roads: “The music of the motor is more than enough.”