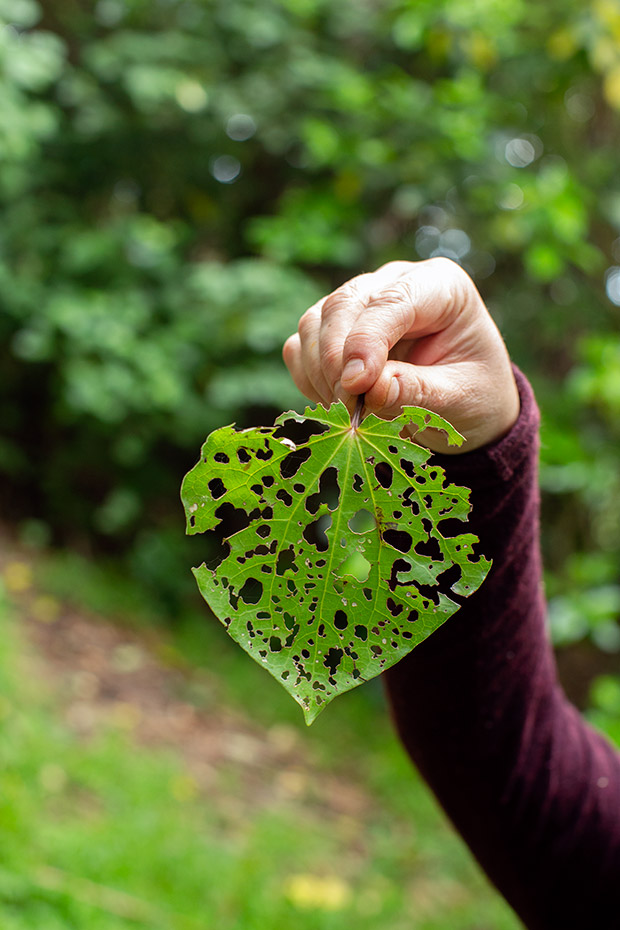 Make the most of this medicinal plant by making a salve, throat gargle or even natural perfume.

Kawakawa are small trees or shrubs with heart-shaped, dark green leaves that are often full of holes made by very hungry kawakawa looper moth caterpillars (Cleora scriptaria). They can grow to 4 metres tall, although are often much smaller. They have jointed brownish branches, and the trees are either male or female.

Male trees produce long, thin flowering spikes that start green and darken with age. Female trees produce shorter, plumper green spikes that ripen to orange fruit called tākawa. People quite often mistake the male spikes for the fruit, but the differences are clear if you observe the plant over time.

Piper excelsum grows widely throughout Aotearoa around parks and bush margins, as well as in gardens, and likes to be close to the coast. Piper melchior is endemic to Manawatāwhi/Three Kings Islands, but it’s also grown on the mainland here and there as an ornamental. It has larger leaves with few, if any, holes. Its fruits are also larger and more bland-tasting.

Kawakawa are susceptible to fungal leaf-curl disease. Don’t harvest from trees whose leaves are drying and rolling up.

Piper excelsum leaves and bark are used extensively in rongoā rākau. This kawakawa species has particularly strong anaesthetic properties, which you can test for yourself by chewing a leaf and feeling the resulting tingly numbness inside your mouth. It also has anti-inflammatory and antimicrobial properties.

This combination of attributes makes it useful as a gargle for toothaches and sore throats, and it’s soothing to the skin when applied as a poultice, oil or ointment. Kawakawa is known as an all-round tonic for cardiovascular health, and, like other members of the Piper genus around the world, it has a long history of use for digestive problems.

It’s generally believed that leaves with looper-moth holes are the most effective. Recent research indicates that when a caterpillar munches on a leaf, it triggers the plant to produce more active compounds in that area. Because of the analgesic nature of kawakawa, don’t go overboard when using the plants in cuisine — that is, use them as a herb, not a leafy green.

More stories you might like:
DIY project: Upcycle a woollen blanket to make a cosy hot-water bottle cover 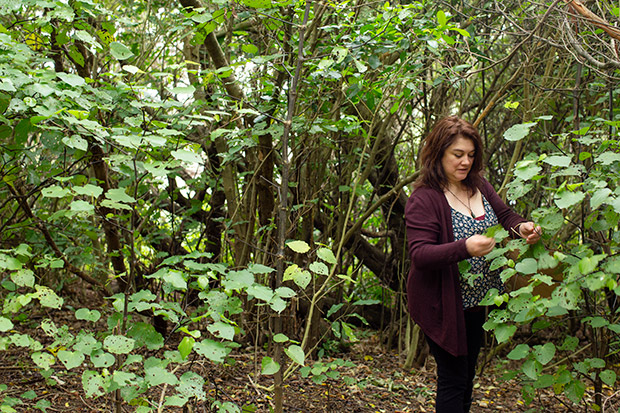 In Mediterranean-inspired dishes, kawakawa leaves take on faintly basil-like tones. For inspiration, you could also look at using the leaves as you would hoja santa in Mexican recipes, or Piper sarmentosum in Thai and Vietnamese recipes.

Chef Charles Royal is a pioneer in the modern culinary use of kawakawa, and has shown how they can be used in many dishes, both sweet and savoury. One of his simplest recipes is fried kawakawa leaves. A single leaf fried in oil until it bubbles and turns translucent, and then drained on a paper towel, can be used whole or crushed as a delicate, crisp, flavoursome garnish. With their oiliness and strong herbal taste, these kawakawa wafers taste to me like delicious herbed sausages, and I instantly want to team them with a comforting vegetable mash.

Royal has also brought the use of kawakawa as a dessert ingredient into the public eye, flavouring meringues, shortbreads, custards and creams with a leaf infusion. The leaves impart a complex palate containing both ginger and vanilla notes. You can create an even more intense flavour or aroma by making an alcohol infusion using dried peppercorns from kawakawa fruit (see below). 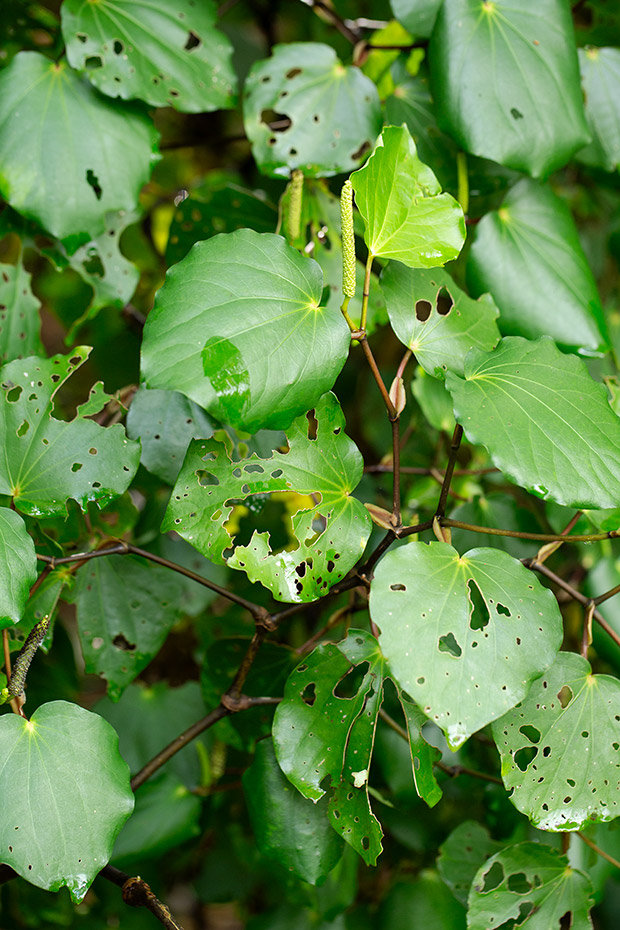 Fruits from female kawakawa trees — tākawa — have sweet flesh with a slight passionfruit flavour, and are full of peppery little seeds. They have tiny white spears through their hearts that you pull out before eating. Make a sauce from the fruits to use sparingly, add them to a fruit salad, or dip a few in chocolate.

Supposedly you shouldn’t eat too many at once or it’ll upset your digestion, but some people disregard this advice without ill effect. Often tākawa will ripen off the bush, especially if they’re starting to blush orange already. They’ll complete their ripening sitting in a warm or sunny place, usually within 1 to 4 days.

More stories you might like:
Zero-waste legend Trish Allen is helping Matakana turn its trash into treasure

Peppercorns are simply the dried unripe fruit of plants in the Piper genus. Tākawa (fruits from female kawakawa) somewhat resemble the fruits of the Balinese long pepper in both appearance and aroma.

To make tākawa peppercorns, gather unripe, green tākawa, leaving plenty on the tree to ripen. You can sun-dry or oven-dry your picked fruits. If you sun-dry your tākawa, put them in as hot, dry and sunny a place as possible. If the temperature is too cool or the air is humid, the drying will take too long and the fruit will begin to degrade before the process is complete. It should take only a few days. Note that some fruit will probably ripen rather than dry. It can be hard to predict which way any given fruit will go when it’s green, but to get the best strike rate, pick the least ripe fruits you can find.

If you oven-dry the tākawa, you won’t have the same problem. Spread them in a single layer on an oven tray and bake in a preheated oven at 60°C (140°F) until they become brown and brittle. They should snap easily. Keep an eye on them to make sure they don’t burn. If there is any hint that they might, turn the temperature down immediately. It’s a good idea to experiment with two or three in your oven before doing a whole batch.

Once the fruit are dry, remove them from the oven and let them cool. Store your dried tākawa in an airtight container. To retain their freshness, leave them whole and then pound or grind them just before use.

Kawakawa has powerful skin-healing properties and can be used to make an oil or salve for eczema, bites and dry-skin conditions, which you can apply frequently.

Place everything in a pot, and infuse the leaves in the oil over a low heat for 5–6 hours. Aim to keep it just below simmering point. You can use a slow cooker if you have one, or a solar cooker. Let the oil cool fully then strain into a sterile bottle. Stored in a cool dark place, this will last up to a year.

Turning it into a salve: To make a kawakawa salve, add beeswax to the oil as you heat it. Use 1 part beeswax to 5 parts oil for a smooth, soft ointment. If you prefer a slightly harder ointment, use 1 part beeswax to 4 parts oil. Use the same method as above, and pour into sterile jars before it sets.

To ease a sore throat, make a gargle or tisane with kawakawa leaves, which have antimicrobial properties. Kawakawa leaves are also anaesthetic. Gather kawakawa leaves at any time of year, preferably those with the most holes. Use them fresh or dry them to store.

Place a leaves in a cup and pour boiling water over. Leave to steep for 10 minutes. Drink slowly, and take up to 3 times a day. Use as a gargle, or sip to soothe your throat.

Using the intensely aromatic dried female fruits of kawakawa is one of the best ways to capture the plant’s beautiful scents.

Put the vanilla bean pod, cloves and tākawa peppercorns into a jar. Pour the vodka over to cover well. After 3 days, strain out the vanilla, cloves and peppercorns. Put a few thin slices of fresh ginger into another jar and pour the tincture over the ginger.

Leave to infuse for another 24 hours or so. Decant into a nice bottle and add a label. 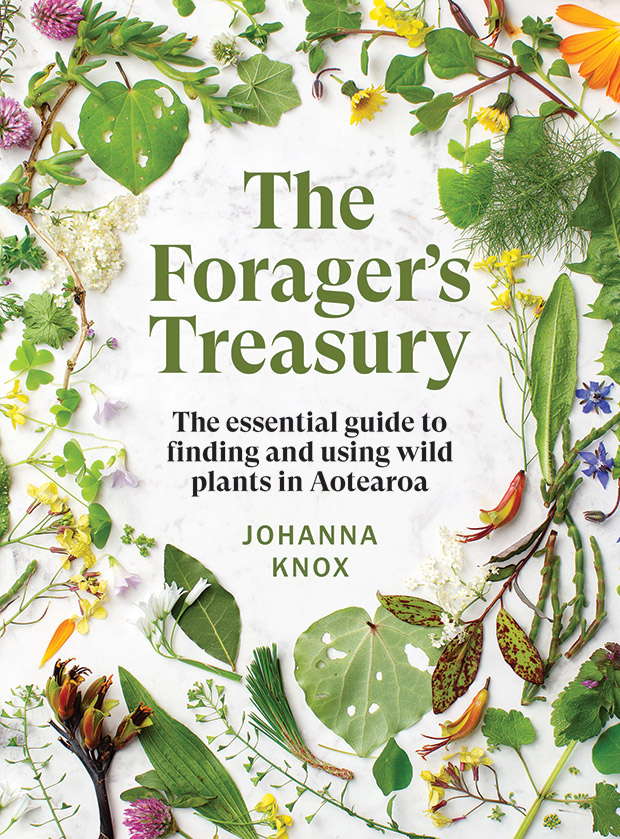 Extracted from The Forager’s Treasury: The essential guide to finding and using wild plants in Aotearoa by Johanna Knox. RRP $45.00. Published by Allen & Unwin NZ. Available 4 May.