Have you done enough for a chocolatum rotunda? New Zealand biscuits celebrated The humble New Zealand biscuit is celebrated in a new tea towel and poster.

Have you done enough for a chocolatum rotunda?

Fancy a bit of zingiber chumbloides at morning tea time? Or are you more of a chocolatum rotunda person?

These delectable treats, more commonly known as ginger crunch and Mallowpuffs respectively, are part of a glorious spread of Common Household Biscuits and Slices of New Zealand. The selection, which pays homage to classic kiwi baking of both the home-made and the shop-bought variety, was created by Wellington illustrator Giselle Clarkson for the children’s compendium, Annual 2.

Each biscuit or slice, delicately drawn with loving attention to detail, has a Latin name (the super-talented Clarkson is also a Latin scholar with a delicious sense of humour).

Susan Paris, who co-edits the Annual with Kate De Goldi, says the initial idea came to her after she’d seen Giselle’s beautiful rendering of the classic Fish Types of New Zealand poster found in fish and chip shops across the country. “I was walking to collect my son from the school bus one day and I suddenly thought, ‘biscuits’,” she says.

While Susan and Kate decided early on that the images would be playful and the biscuit selection not too highbrow, narrowing down the choices was difficult, and the final selection proved controversial. Many lamented the inclusion of the misleading sultana pasty (Latin name: Disappointus minor) and the humble raisin biscuit (Deceptus terribloides), while discovering that the lurid pink wafer (Latice lamina) had made the cut prompted much gnashing of teeth on social media.

More stories you might like:
How to tell when a persimmon is ripe PLUS and easy persimmon cake recipe

Paris, a devoted fan of ginger crunch, believes this kind of “not very intellectual debate” was behind the image going viral when Annual 2 was published last year. They’ve now created a poster and tea towel version in response to huge demand from around the world. The tea towel, handprinted in Wellington with water-based inks on 100 per cent Indian cotton, is a work of art, Paris claims.

“After the image came out, we were contacted by lots of expat Kiwis asking if we’d make it into a tea towel they could hang in their kitchens. It’s done by hand and each is different.”
Common Household Biscuits and Slices of New Zealand ($25 for the tea towel, $40 for the poster) is available from The Annual Shop. 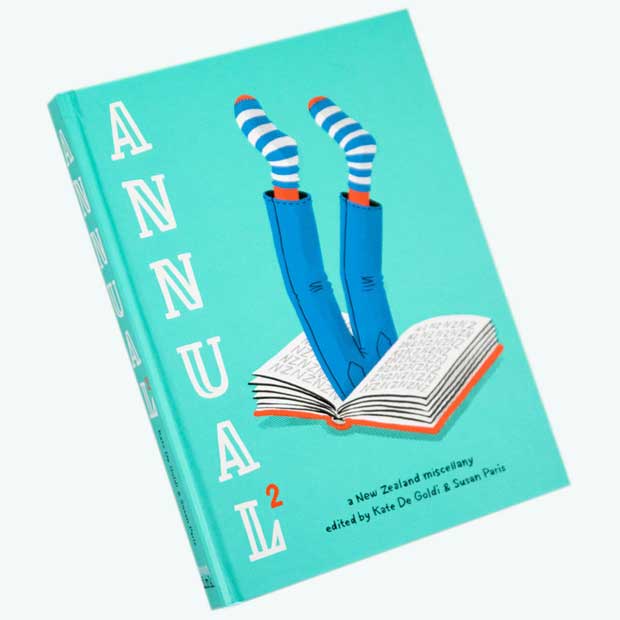 Annual 2 is a highly original, contemporary take on the much-loved annuals of the past – all in one beautiful package. Alongside familiar names publishing for children – Gavin Mouldey, Sarah Johnson, Ben Galbraith, Barry Faville, Giselle Clarkson, and Gregory O’Brien – you’ll find the unexpected, including a new song by Bic Runga, a small-town mystery by Paul Thomas, and a classic New Zealand comic illustrated by new talent Henry Christian Slane.