The 6 plants every chocoholic needs in their garden If you like chocolate, you’re going to love chocolate flowers. Not the edible type, but real, chocolate-scented blooms. Chocoholics love them. 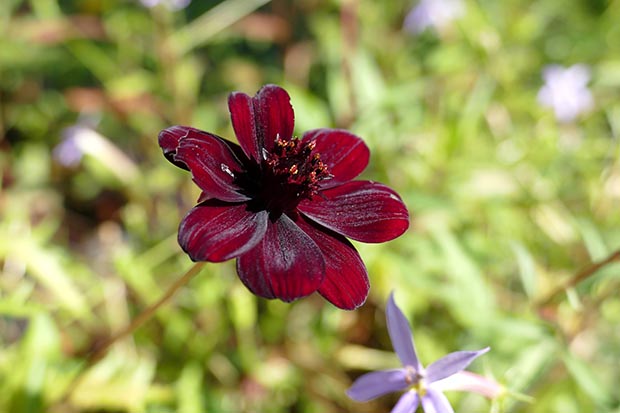 1 CHOCOLATE COSMOS
While the common annual cosmos (Cosmos bipinnatus) has no discerning scent, the perennial Cosmos atrosanguineus has a distinctive chocolate one, and its deep burgundy flowers look as velvety as chocolate too. The scent is stronger in the afternoon when the warmth of the sun has had time to awaken its sweet aroma.

The flowers appear on long stems over summer and autumn, which is when you’ll see plants in garden centres, especially around May and June.

It used to be that the only plants available were sterile which meant no viable seeds could be produced. The plant was thought to be extinct in its native Mexico and any new plants were propagated from sterile clones. But recently a single plant was discovered with a few fertile seeds, and breeding work began.

Since last year it has been possible to purchase chocolate cosmos seeds via Egmont Seeds and King Seeds, albeit in small quantities (5 seeds per packet) and for a higher price than other flower seeds, but it’s exciting that seeds from this plant are now available.

I’ve grown chocolate cosmos many times. Even in the relative warmth of Auckland I’ve managed to kill them off over winter. They need warmth. Most cut flower growers overseas grow them as annuals.

If producing forwinter here in NZ, you’re going to need to grow them in light and temperature-controlled greenhouses. Research in England has shown that they can be forced to flower out of season when grown in greenhouses. Long days (17 hours of illumination) and temperatures between 17-21°C will produce bigger flowers and stockier plants, and flowering is advanced by 33 days than those grown in 8 hours of light.

When sowing seeds, emergence was found to be greatly affected by temperature.

“A first experiment showed the time of emergence of overwintered plants raised from micro-propagated tubers was highly related to temperature, but not photoperiod, such that at 11.5°C shoots emerged 17 days later than those at 27.2°C.”

Source: Environmental regulation of flowering and growth of Cosmos atrosanguineus, Kanellos and Pearson (2000)

Mixed bouquets and potted plants are a draw at garden centres and farmers’ markets. Imagine the extra pull of a chocolate-scented plant. 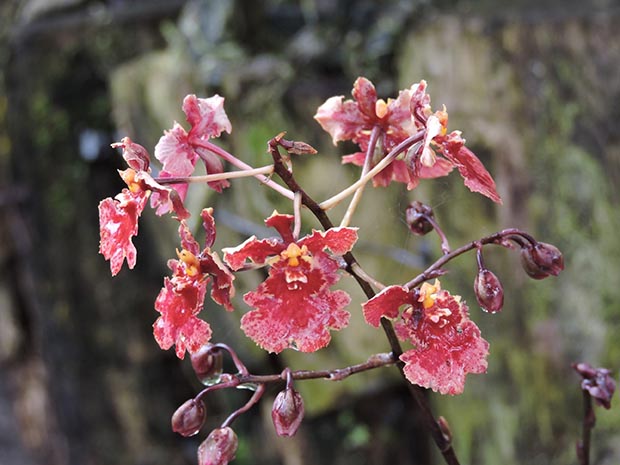 2 ONCIDIUM SHARRY BABY ‘SWEET FRAGRANCE’
Possibly the most well-known of all Oncidium orchids is the chocolate-scented Sharry Baby. The flowers are small, about 3cm high by 2cm wide, but each flower spike can hold 50 flowers or more. They have a definite chocolate scent, which makes it a true novelty in the orchid world.

There are several varieties of Sharry Baby, but one of the most popular is Sweet Fragrance. It produces dozens of cherry-red flowers with white lips around May – then again six months’ later. But the plant often blooms sporadically throughout the year, each flower spike lasting six to eight weeks.

These plants should be grown indoors in diffused light. While more light will produce more scent, you need to avoid direct sunlight or the leaves will burn. According to some, the pink blooms of Oncidium ornithorhynchum also smell of chocolate, but Ross from Tuckers Orchid Nursery in Auckland reckons it smells more like pink icing. Both orchids are available from Tuckers Orchid Nursery. All have elegant magnolia-like flowers with a hint of chocolate, although it’s the foliage rather than the flower that has the better scent.

“Yes, the flower too – if you catch a nice mild humid night you will get a hint of it – but it tends to be in the foliage, the bark and the stems,” says Denis Hughes of Blue Mountain Nurseries in Otago.

‘Hartlage Wine’ has great autumn colour, too, says Denis, at least if you live in the cooler regions. In warmer areas, like Auckland (you can see C. chinensis and C. Hartlage Wine at the Auckland Botanical Gardens), the buttery autumn colour won’t be as spectacular. 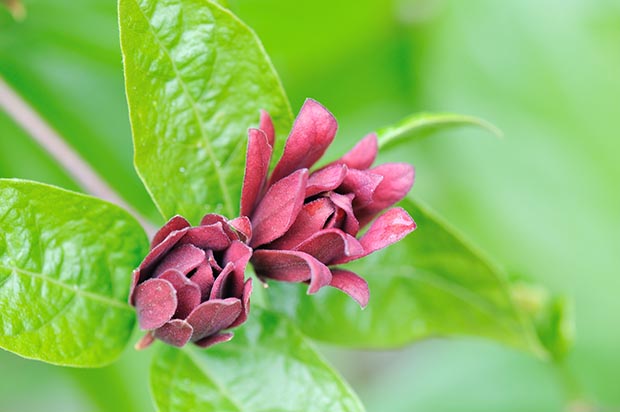 As for the flowers?

“They start flowering about November, or in a really sheltered site at the end of October,” says Denis. “You get your main flush in late spring-early summer, and if you’ve got them growing in the right spot they’ll flower right through summer, up to March.”

“It flowers on the new wood,” says Denis. “Feeding makes a big difference, and pruning does too. You can do a hydrangea trick. That is, thin out the old rubbish and encourage new growth to come through. That also stops it getting too large.”

Calycanthus grows in sun or part-shade. 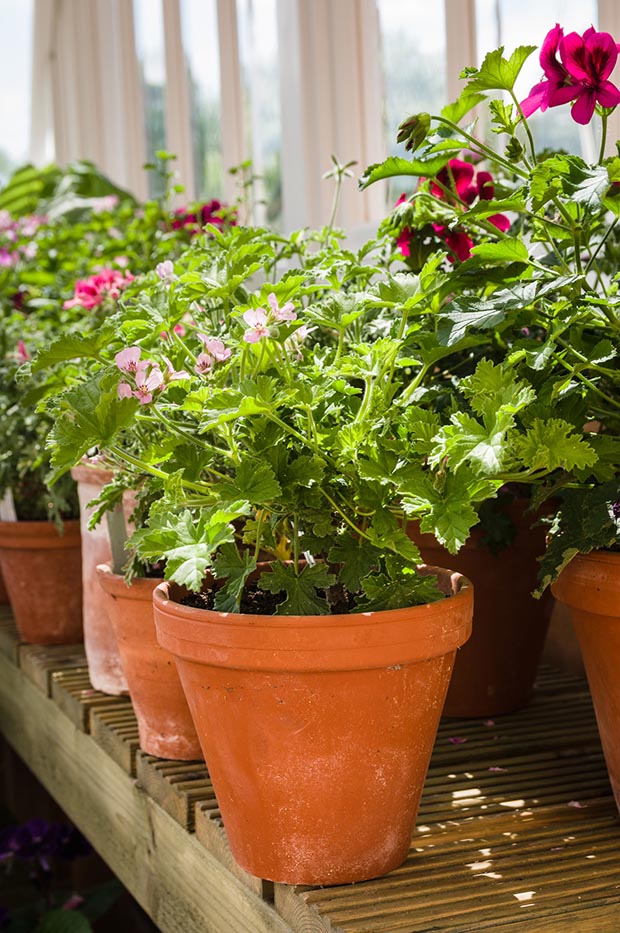 4 CHOCOLATE-SCENTED PELARGONIUM
Florists adore scented pelargoniums (often called scented geraniums), but it’s the foliage rather than the flowers that are more useful in bouquets. The scented leaves are ideal for bulking out arrangements and provide additional sniff factor for the perfume lover. There are many forms of scented pelargonium: rose, lemon and ginger, among others.

“Being a South-African import myself, I find a certain affinity with the scented pelargoniums. Like me, these lovely plants seem very happy to root and grow in New Zealand soil. Having most of the commonly known ones in my garden already, like lemon, nutmeg, rose and citronella, and having previously had the chocolate-mint pelargonium, when I saw the little plant in a garden centre with a tag that read ‘chocolate scented’, I had to try it.” 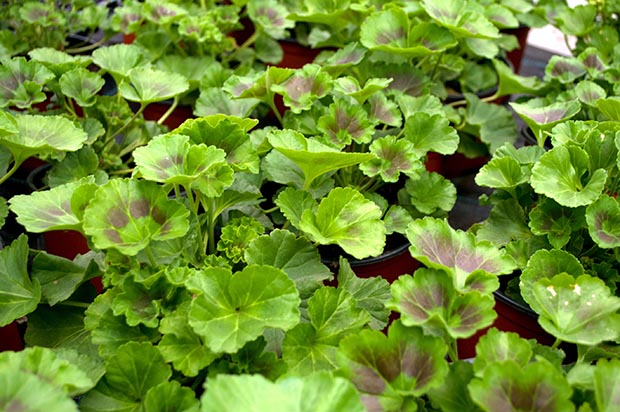 However, the chocolate perfume is not overly strong.

“It really only has a very subjective chocolate fragrance, and perhaps only because the name suggests it. But, using your imagination, there is a definite hint of something dark, perhaps bittersweet, and deep in the leaf scent. Unlike peppermint and rose pelargoniums, which lend a soft trace of their fragrance in custards, creams and baking, this chocolate-scented plant does not quite lift to the same level as a culinary herb. I still use the pretty pink flowers as an edible though, and enjoy the not-quite-chocolate-scent when I brush past it in the garden.”

In an overall bouquet of chocolate flowers, however, the foliage is complementary. When picking the leaves, choose hardened rather than soft stems or they will wilt quickly. 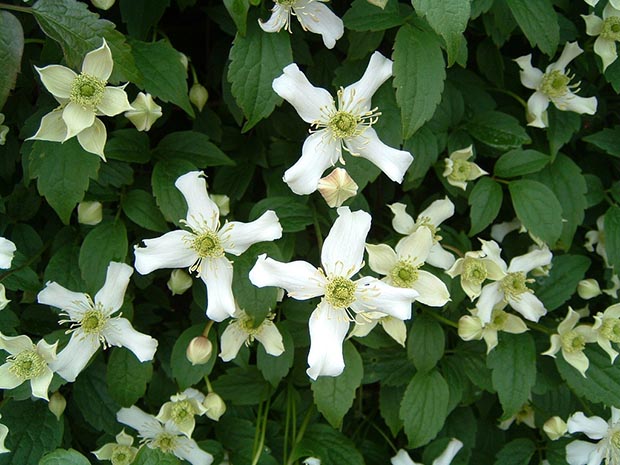 5 CLEMATIS MONTANA VAR. WILSONII
They may be small, but the flowers of Clematis montana var. wilsonii have a powerful chocolate perfume. They start with a honey-vanilla aroma, says Clematis grower Peer Sorensen of Yaku Nursery in Waitara, then change to a delicious hot chocolate late in flowering.

This clematis produces its flowers – creamy white with yellow anthers – from late spring to early summer. While many summer-flowering clematis can be pruned for repeat flowering, the montanas cannot, as they only flower on ripe wood.

But Clematis montana var. wilsonii will certainly bloom for Christmas, where a chocolate-scented plant is just the ticket for chocolate lovers.

Vigorous and easy to grow, plants can grow up to 10m high, so they are best trained over pergolas or fences. 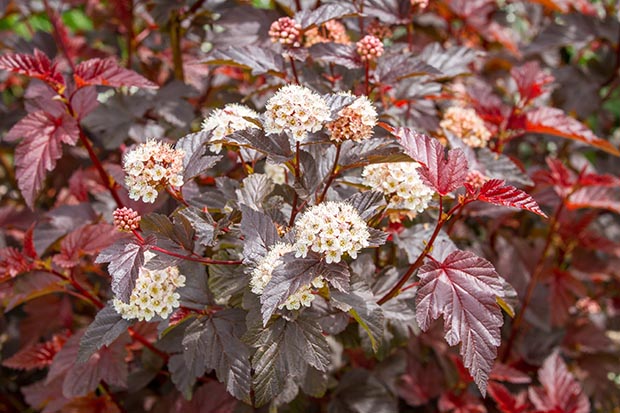 6 PHYSOCARPUS SHADY LADY
For chocolate-coloured foliage, try Physocarpus. This seductive plant is one of the best for plumping out bouquets. There is no scent, but the cut foliage can last up to two weeks in the vase.
Overseas, Diablo is the cultivar to grow. In New Zealand we have Shady Lady, a deep-coloured cultivar that was developed here. It has mahogany leaves with olive undersides and red stems, and the bonus of gorgeous cream, pompom flowers in summer, which also last well in the vase.

Shady Lady is a hardy, deciduous shrub and pretty low maintenance. It will grow in warm and cold areas, sun or shade. When young make sure you provide adequate water, but once established it will withstand drought.

The harder you cut these plants, the more leaves they will produce. 3 FOLIAGE PLANTS FOR THE CHOCOLATE BOUQUET

There are other foliage plants that are suitable for chocolate bouquets.

✽ Beech (Fagus) in its many forms is a good contender for floral design. If you’re looking for chocolate-coloured leaves, Purpurea and Rohanni are great choices. 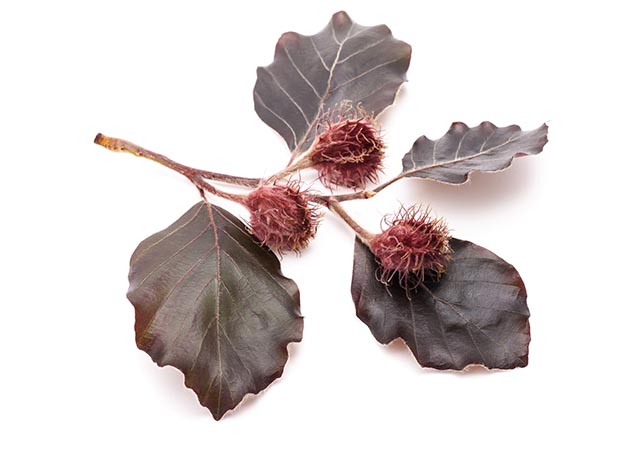 ✽ Heuchera Chocolate Ruffles and Heuchera Coco are great picks too, with leaves that last more than 10 days in a vase, and which make excellent collars for smaller posies. When harvesting Heuchera, pick no more than half the leaves from any one plant in a year or your plants will become weakened. 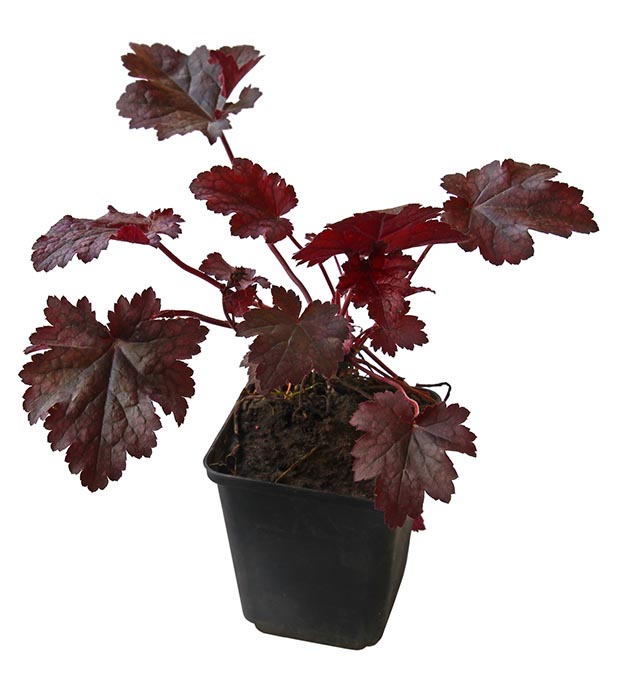