8 things you need to know about donkeys 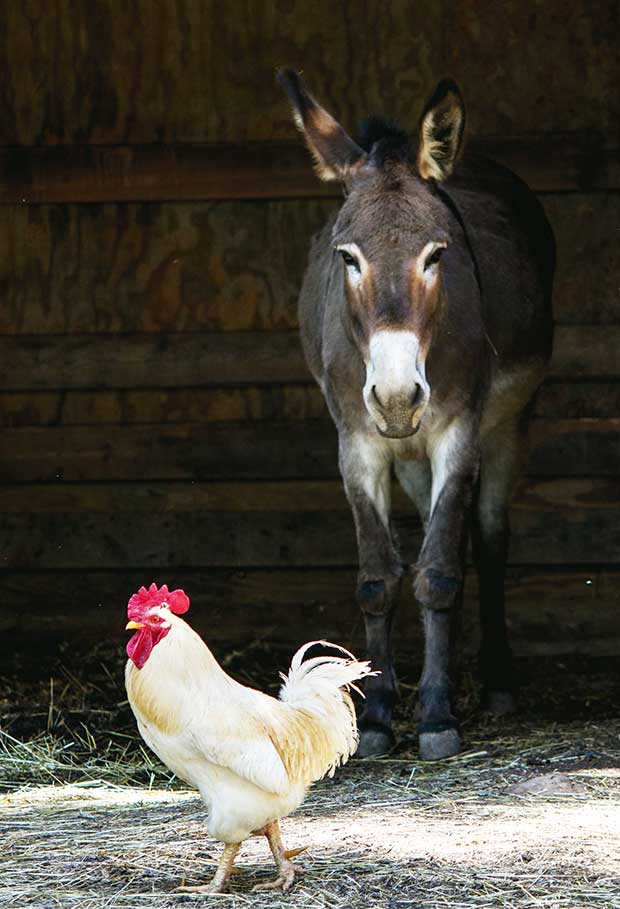 The donkey is a gorgeous animal, but because most people don’t know much about them they’re also likely to suffer from welfare issues, with the most common being untrimmed hooves, no shelter, and obesity.

Andrea Thompson has been rescuing donkeys for a long time. The founding member of the Donkey and Mule Protection Trust NZ says donkeys are one of the most misunderstood animals.

The first thing you need to know, says Andrea: a donkey needs another donkey. They will live with other livestock, but donkeys have fewer behavioural issues and are happiest when they live with another donkey. If Andrea needs to train one of her donkeys — she does competitive carriage driving — she will take another donkey with her on a lead so the donkey in training doesn’t feel alone.

These are the other important things to know before you get donkeys.

The latest research shows the smartest of all equines is the mule, the offspring of a donkey and a horse. Andrea says people tend to look at donkeys as cute and fluffy and totally underestimate how big a brain they have in their over-sized heads.

2. DONKEYS ARE NOT STUBBORN

The intelligence of the donkey means many people interpret its behaviour in certain situations as stubbornness when the animal is doing what comes naturally: stopping, assessing a situation, and thinking about its choices before making a decision on what action to take.

Donkeys have different ‘danger’ reactions. While it is thinking about the best reaction it will freeze, something often perceived as stubbornness.

The first option is flight, and they’ll run for about 100m and then stop to reassess. They may just stand there and not move until they feel reassured. Donkeys need to do this when confronted by something new, says Andrea. Her advice: let them investigate and don’t push them.

They may also choose to attack, striking out with their front feet against something they perceive as dangerous, eg a dog.

Donkeys form very strong bonds with their owners and other donkeys. They are very cautious of strangers (a vet or farrier visit is stressful).

A donkey on its own will become very upset and can bray very loudly, especially jacks, but donkeys that live in pairs tend to be almost silent.

Like horses, donkeys need their hooves trimmed every 6-8 weeks. Andrea says a lot farriers don’t have much donkey experience and need to cut more of the sole away and not leave their feet too long or heels too high.

5. GOOD FOOD IS NOT GOOD FOR DONKEYS

Donkeys are designed to live on sparse, poor quality forage. They easily get fat on rye and clover, then begin to suffer from painful health issues such as laminitis (inflammation in the hooves).

Feed needs to be restricted, but not their space. Andrea recommends a track system where you put a second fence just inside a paddock’s fence, creating a track around the perimeter. This gives you grazing in the middle for other animals but forces a donkey to walk long distances in a more limited grazing space.

Feed roughage like dry hay made from tall, coarse grasses that are past their prime. Donkeys also need vitamin supplements and access to a salt lick.

6. DONKEY COATS ARE NOT WATER-PROOF

Donkeys must have a run-in shelter or they can get pneumonia. A cover or trees/hedges is not good enough.

It’s very easy to fall in love with donkeys due to their high cute factor and engaging personalities but it’s a long-term commitment. Donkeys can live to be more than 30 years old and will form a very strong bond with you and other donkeys

An entire male donkey is called a jack. Don’t ever buy one unless you are willing to pay to get it gelded. Jacks have aggressive tendencies. They can go from placid to aggressive in a flash and are often the victims of abuse by inexperienced owners. Jacks are the most commonly rescued and can have other behavioural issues due to abuse by people who can’t handle them.

WHERE TO GET ADVICE AND HELP