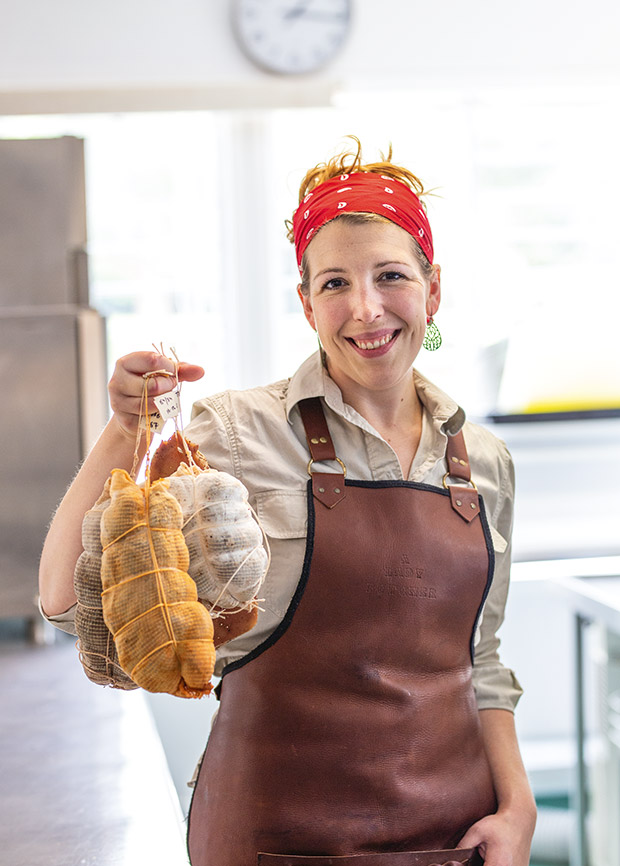 A charcutier returns to the forgotten days of butchery – plucking free-range livestock from the paddock and using every last jowl, shoulder and trotter.

Animals ambling over the lush paddocks and the craggy hills of Central Otago came to mind as Hannah Miller Childs flicked through the cured meat selection at the supermarket. Prosciutto and pâté certainly looked the part for a picnic spread, but import labels told Hannah otherwise.

“I was shocked,” says the United States-born butcher and trained chef. “There weren’t many cured meats from New Zealand, which is crazy because we have some of the best meat in the world.”

Her charcuterie business, A Lady Butcher, is changing that. Every ingredient, from the pork to organic sea salt, is sourced from Aotearoa. The business was started from home – or more specifically, the home of her and her then-boyfriend-now-husband Andrew Childs. But spare room for plump prosciutto legs and drying pancetta eventually outgrew their beer fridge. She launched A Lady Butcher in 2016, albeit slowly: “That first year was more of a hobby than anything else.”

The melt-in-the-mouth salted beef earned A Lady Butcher a silver medal in the 2019 Outstanding NZ Food Producer Awards, in addition to a gold medal for her free-range coppa (slices of cured pork shoulder). It’s an accolade that Hannah, who is from Portland, Oregon, credits to the land that grows her ingredients. 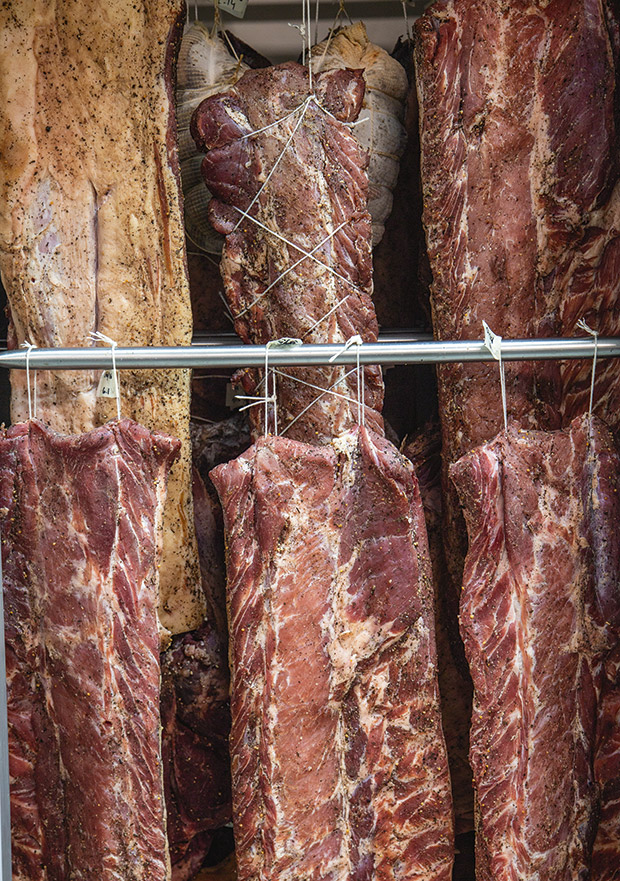 “We have amazing meat in New Zealand,” says Hannah. “When you dry an awesome product, it’s going to have an even better flavour. The difference can be tasted because there’s nowhere for the meat’s flavour to hide in the drying process.”

In a world full of pepperoni and bacon, not everyone will be familiar with Hannah’s traditional Italian-style cuts, such as guanciale (cured pork jowls) or coppa. But lesser-known products get to the bone of Hannah’s nose-to-tail philosophy.

“Every part of an animal is edible. We are often challenged in Western culture by cuts we think are normal.”

Hannah first heard of nose-to-tail cooking while studying at the Culinary Institute of America in New York. London restaurateur Fergus Henderson and (the late) celebrity chef Anthony Bourdain spoke to students about the disconnect between consumers and farms in a guest lecture on the subject. Henderson, who coined the term “nose-to-tail” in his book The Whole Beast, encourages cooks to return to old-fashioned butchery by sourcing — and using all of — locally raised animals.

“Using everything, even offal, ensures the animal is appreciated. We show respect by making sure parts aren’t ending up in the bin,” says Hannah.

The young chef consequently moved to London, cutting her teeth in the kitchen at Paternoster Chop House and then at Ferguson’s nose-to-tail restaurant, St John. Butchery was the only way to earn a promotion at Paternoster. So there, under a master butcher, she learned a British style of butchery she practises today.

“Seam-cutting uses the entire pig for whole-muscle charcuterie,” she says. 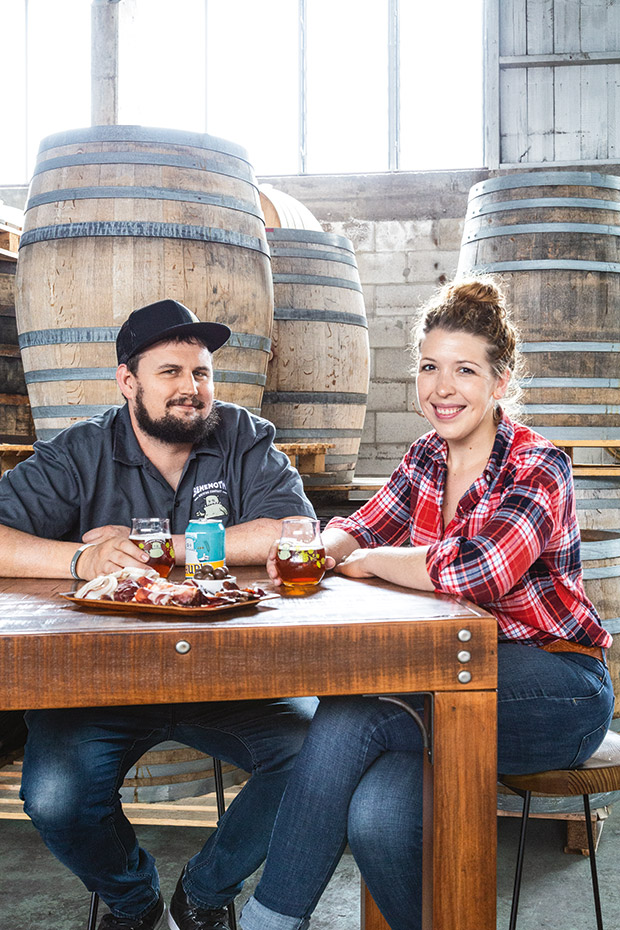 Since 2016, A Lady Butcher has established relationships with farms producing ethically raised pigs from Blenheim and Houhora, cattle from Hawke’s Bay and lamb from Invercargill. “It’s important to me that I know my farmers,” says Hannah.

More stories you might like:
How a 100kg bag of cacao beans changed lives in two countries

Connecting with farmers can also prevent waste in the paddock-to-plate supply chain, like the time one of her pig suppliers had too many jowls. Add a pinch of lemon zest, dry them in the fridge for three months and – boom – cuts of guanciale are ready to be chopped up into savoury bacon-like lardons.

Pork, salt, time. It seems like a simple formula but, as Hannah has learned, there’s a science to charcuterie. She spent her 20s cheffing around the world, experimenting with pâté and prosciutto here and there until she worked under American charcutier Julien Shapiro.

He taught her finesse and consistency – that cured meat should be excellent (and safe) every single time. “My technique wasn’t necessarily wrong, but it wasn’t perfect,” she says. 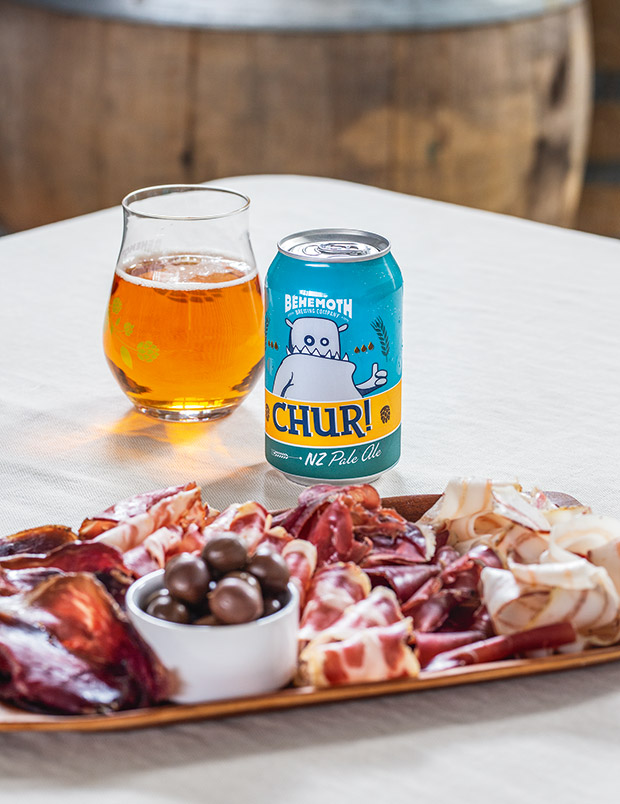 She moved to Auckland on a whim in 2015. Butchery happened to be on the skills shortage list, making her eligible for residency. A year later, she met her future husband, Andrew Childs (founder of Behemoth Brewing), who soon became a beneficiary of homemade charcuterie and the smell of bone broth always simmering in their kitchen.

In March, the couple is set to open a nose-to-tail restaurant and brewery in the Auckland suburb of Mt Eden. Hannah will have space to butcher whole carcasses for both A Lady Butcher and the restaurant. In Hannah’s eyes, every less trotter and jowl wasted makes a difference. Especially so when a little salt and time can make the
meat more delicious.

“As a culture, we are trying to eat less meat. We should eat less, but better. My products are a great example of this. A little bit goes a long way because it has so much flavour.” Just as mould coats a brie rind, white dots of a penicillin-based mould will eventually form a protective layer around curing meat.

Andrew, Hannah’s husband, once panicked when, upon peering in his meat-packed beer fridge, he discovered a drying pork tenderloin encased in fluffy white mould. Hannah assured him that if anything, it would protect the meat. “That was a flavourful mould because the fridge contained yeast spores from beer.”

When Hannah moved her products to a shared kitchen space, it took her nearly eight months to create a similar environment in her commercial meat fridge. “I spent all of my time cleaning because any bad mould had to be wiped with vinegar.” In a bowl, whisk together the vinegar and mustard. Slowly add the olive oil and season to taste. In a second bowl, drizzle rocket with the dressing according to preference.

Arrange the bresaola on a plate or wooden platter and top with the dressed rocket. Use a vegetable peeler to shave the parmesan over the salad, letting pieces land as they will.

Drop small chunks of honeycomb around the plate and serve.

A Behemoth tale: Meet the brewer behind the tongue-in-cheek craft beer and Auckland’s upcoming brewery Churly’s

Everything to know about raising free-range heritage pigs