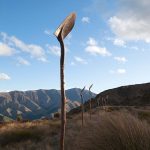 Spaced across a spiny ridge is Tom O’Brien’s moving tribute of 30 shovels standing sentinel signifying the 30 Chinese labourers who toiled for three years half a world away from friends and family and changed this landscape forever. 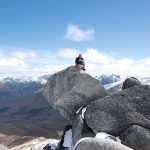 Top o’ the world, Ma! No fear of heights then for Sam the pilot, perched on one of Mount Titiroa’s artfully stacked boulders, stuck together by time like boiled sweets in a school-boy’s pocket. 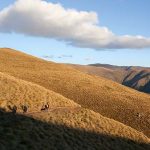 The walk to Mud Hut crosses honey-coloured hillsides of tussock so evenly spaced it’s like the tawny gold of a chenille bedspread. The water race’s path is amazingly straight, considering it was hand-cut with little in the way of measuring devices or plumb lines. 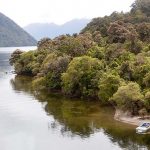 Never mind the sandflies. Mãori legend has it that Hine-nui-te-põ, goddess of the underworld, was alarmed by the beauty of the fiords and worried that people who saw them would not want to leave so she released the sandfly. And to this day sandflies the size of ham sandwiches live in Fiordland. But you need not fear them: mix equal parts first-aid strength Dettol and baby oil and decant into a small spray bottle. Especially good for those allergic to aerosol repellents. 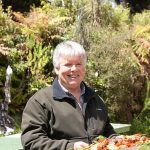 Not just a pretty face, Roffy rustles up lunch fit for a king, complete with local venison ready to melt in your mouth. 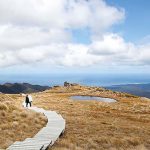 The private boardwalk at Okaka Lodge where alpine tarns reflect rocky tors. At 890 metres, the uninterrupted views of Te Waewae Bay, Waiau Valley and the Takitimus deserve the word spectacular.

On foot through northern Southland’s high country, by jetboat to the shore of its western extremes and on board a helicopter to the roof of the world – a weekend in Southland is an awfully big adventure.

This story won the Heritage Hotels Award for best Travel Story about New Zealand at the 2017 Travcom Travel Communication awards.

When the most amazing thing you’ve seen lately is a cat that’s terrified of a cucumber, it’s easy to feel a little domesticated. Time to get out from behind the inbox, answer the call of the wild.
Less than an hour south of noisy, over-developed Queenstown is a quiet high-country trail. Developed by Tom O’Brien of the 1000-watt-smile on land in his family for more than 100 years, Welcome Rock Trails is a private 27-kilometre single loop on a gentle three-to-five-degree gradient that follows the historic Roaring Lion water race on Blackmore Station, near Garston. Half the station was retired as conservation covenant when Tom was a boy, roaming it on largely unsuccessful hunting trips. “Taking a rifle for a walk,” he says.

As an adult, a chance encounter with Gary Patterson, a specialist mountain-bike track cartographer, gave him the expertise he needed to turn this pristine blank canvas into a walking and biking trail. It starts at the old ski hut, transported up the winding pass in 1934 by a Dennis steam truck, which conked out right here at 800 metres, so high the macrocarpa windbreaks planted on the pastureland below look like Groucho Marx’s eyebrows and the local fauna come in collective nouns – a cubby of quail, an army of frogs, a fabulousness of beetles, an escargoterie of powelliphanta (which is, in case you didn’t know, a large land snail the size of a woman’s hand).

More stories you might like:
How Karen Rhind started again with a lavender farm and dry garden in Central Otago

The Roaring Lion race transported water from the top of the Nevis to the lower Nokomai Valley to sluice alluvial gold. Thirty Chinese labourers toiled for three years (each paid two pounds a week, enough then to buy a pair of gumboots) to complete this feat of engineering in 1898. To honour the labourers’ efforts and preserve the landscape, no heavy machinery was used in the creation of the trail, meaning it took Tom two years to break four picks, two shovels, a wheelbarrow and himself; persevering despite rain, hail, snow and self-doubt, and because half a track would have looked stupid. 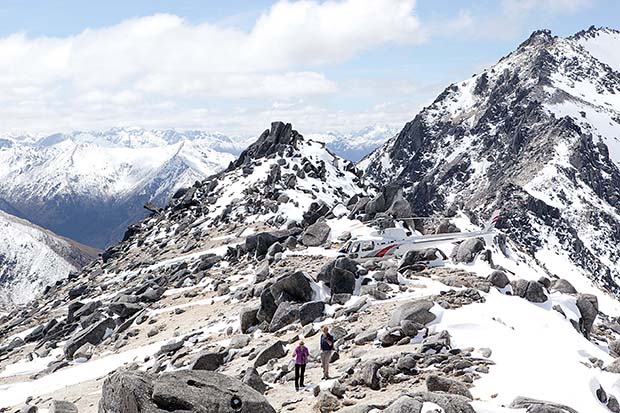 The highest point is at 1130 metres, where the cow-boned backs of the Eyre Mountains wear a frosting of fresh snow and the wind zings in your teeth, apple crisp. The verger veils the Mataura Valley and the faces of Nevis and Nokomai − practically the only other faces seen by race-keepers Lee Lum and Jimmy Long, who lived nearly 10 kilometres apart and looked down into the bustling goldfield but rarely visited. It’s in their footsteps we follow; their loneliness our solitude, as, hypnotized by the heartbeat rhythm of walking, the monkey chatter in the mind drops away.

Schist tors stand like Easter Island heads in a marvellous sub-alpine garden of fragrant hebes and daisy-ish celmisia. “It’s kinda nice,” says Tom.
It’s a 13-kilometre walk from the old ski hut to Mud Hut, Jimmy Long’s old sod cottage, now restored to fit four in comfort. Muscles ache, feet fair pluse. The full moon rises as if drawn on ropes by an unseen stagehand to light the perfection of the scene: tussocky slopes, a copse of beech where a morepork makes its presence known. Inside, the fire casts an orange glow, rain tinks against the iron roof and sleep crashes down like a curtain.

A mere two-and-a-half hours’ drive away on a fresh clear morning post a mug of stove-top coffee is Te Anau, gateway to Fiordland National Park. Bigger than Yellowstone and Yosemite put together, splayed like a hand with too many fingers, the 14 fiords carved thousands of years ago by massive glaciers were misnamed “sounds” by English settlers homesick for Wordsworth. Fiordland’s poetic melancholy is a watery one.

River deep and mountain high, in ice, lakes, crystal clear streams, dripping from lichen-covered branches, thundering down waterfalls, growling and thumping in breakers biting the coastline. The rainfall here is sudden and phenomenal. Yet the weather clears just as soon and surprisingly, pretending innocence. After a heavy downpour the lush forest is spritzed, coloured green from Kermit to emerald.
To really appreciate Fiordland’s surf beaches, waterfalls, rivers and fiords, its landscape gouged by the claws of time, you need to see it from above, and Southern Lakes Helicopters offers a full-day highlights package. 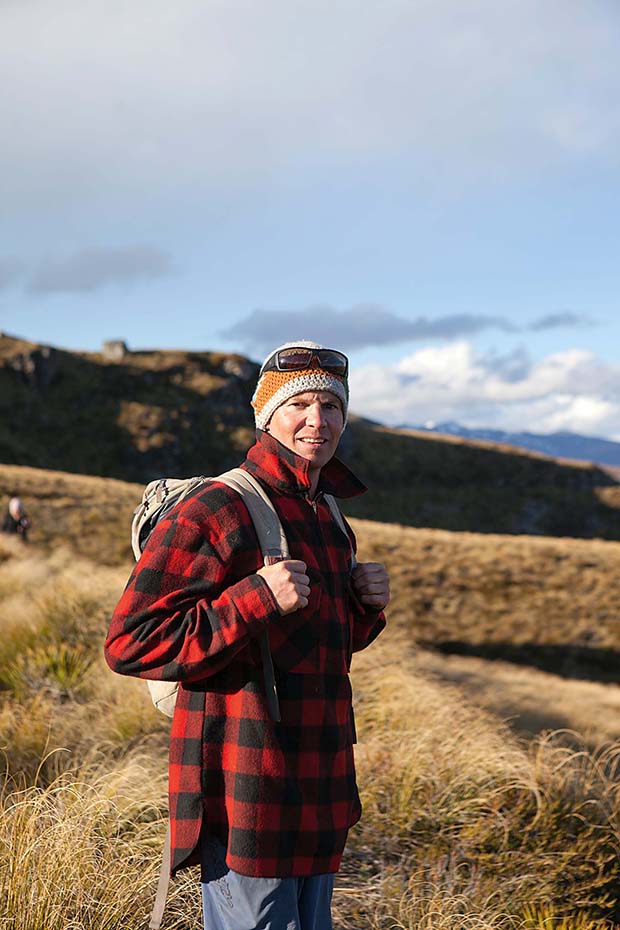 “Fiordland’s hard to beat,” says Sam the pilot, as we take off from the lakefront helipad, “impossible to beat, in my point of view”. And point of view is everything when there’s nothing between you and the ground more than 900 metres below − trees tufts in a green wool carpet, mountain ridges brown and patchy like a moulting deer’s rump.
Lake Hauroko or “windy lady” is the deepest in New Zealand and cold, ripples on her surface look like bubble wrap as our shadow races us to touch down at Teal Bay. Standing in the great wide open of New Zealand’s people-less expanse, in a daft Disney moment you imagine yourself covered in birds, deer and other woodland creatures flocking to your side − but the only things flocking are 20,000 extremely friendly sandflies.

The solution: transfer to the Humpridge Jet for a sandfly-defying journey down the waterfall that is the Wairaurahiri River, 27 kilometres of rocky, roiling rapids ridden source-to-sea past rainforest so prehistoric you expect a dinosaur to poke its head above it any moment. Roffy the jetboat driver tells us this river, the cleanest water in the country, is so fast moving the fit brown trout’ll snap your line and so far from civilization it’s a two-day walk out… provided you know where you’re going. Spin me round twice, I’m lost. But this trip is proving you don’t need a sense of direction to recalibrate your internal compass.

The river meets its destination at a bouldered beach where whitebaiters in waders cast nets for the last of the season. After a lunch of local venison at the remote Waitutu Lodge – where if there’s a rustle in your hedgerow it’s one of the Ks: kaka, kerereu, kokako, kiwi or kakapo – we exchange outboard for rotor and fly higher than an eagle to Percy Burn, the biggest wooden viaduct in the Southern Hemisphere, built to carry the Port Craig tramway and a relic of 300 men who made something from nothing and met challenges with resourcefulness and humour (like Tom O’Brien). The mill, with its eye on chopping 15 million metres of timber, went bankrupt before it could. Also forgiven: 150 years of whaling, with the return of southern right whales to Te Waewae Bay beneath Okaka Lodge, the start of the three-day Humpridge Track. On a clear day you can see Stewart Island from here.

Last stop on this tiki tour of southern delights is Mt Titiroa, the pale complexion of which is the result of white granite formations and not snow, although there is some today (just quietly, fresh snow is delicious). Nothing, absolutely nothing, gives you a superiority complex, a movie/rock-star feeling, like landing on the top of a mountain in a helicopter. And in true Fiordland style, the clouds parted, the sun came out, and the view slapped us into a state of silent awe. Home was never like this. 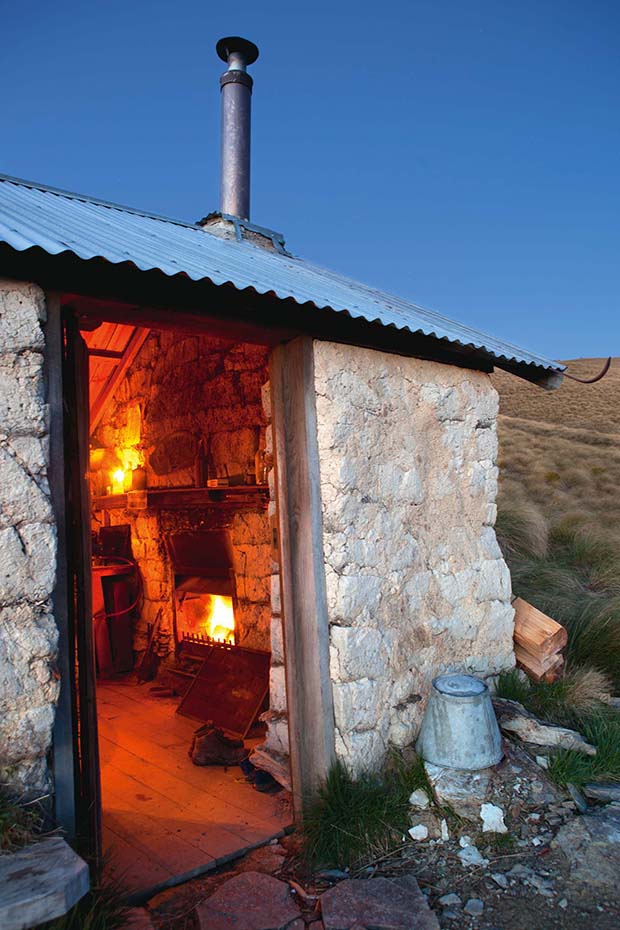 NOTEBOOK
Do: Take the road less travelled, but remember to fill up with petrol and make sure your tyres can handle gravel roads. For information on the Southern Scenic Route visit southernscenicroute.co.nz
Visit: The Hunny Shop (beneath the Pooh Bear sign) in Garston. Not what you’d expect, inside is an exotic cornucopia of carpets, carved doors and kilims (as well as honey), all ready to be shipped to your door.
View: Whet your appetite for a helicopter ride by watching Ata Whenua – Shadowland. Filmed across extremes of season and terrain by award-winning cinematographers and screened at the specially built Fiordland Cinema at 7 The Lane, Te Anau. fiordlandcinema.co.nz
Eat: At Garston’s Trailer
Sixty6 Café, a converted silver 1966 Airstream, selling American-style hot dogs, burgers, coffee, slices and muffins and cold drinks.
Stay: At Mud Hut or Slate Hut. Tom recommends protein, so tuck a nice juicy sirloin and a bottle of red into your tramping partner’s backpack. In Te Anau try Distinction Te Anau Hotel and Villas, which is right on the lakefront, directly across the road from Southern Lakes Helicopters’ heli-pad.
Pay: Visitors pay $40 to ride or hike the Welcome Rock Trails Grade 3 Circuit; $100 to 120 for two people to stay at either the rebuilt Mud Hut or Slate Hut, extra for guided overnight hikes and glamping sites for those who like some posh (welcomerock.co.nz). Southern Lakes Helicopters’ Explore Fiordland Package, including barbecue lunch and afternoon tea, costs $1975 per person (southernlakeshelicopters.co.nz).