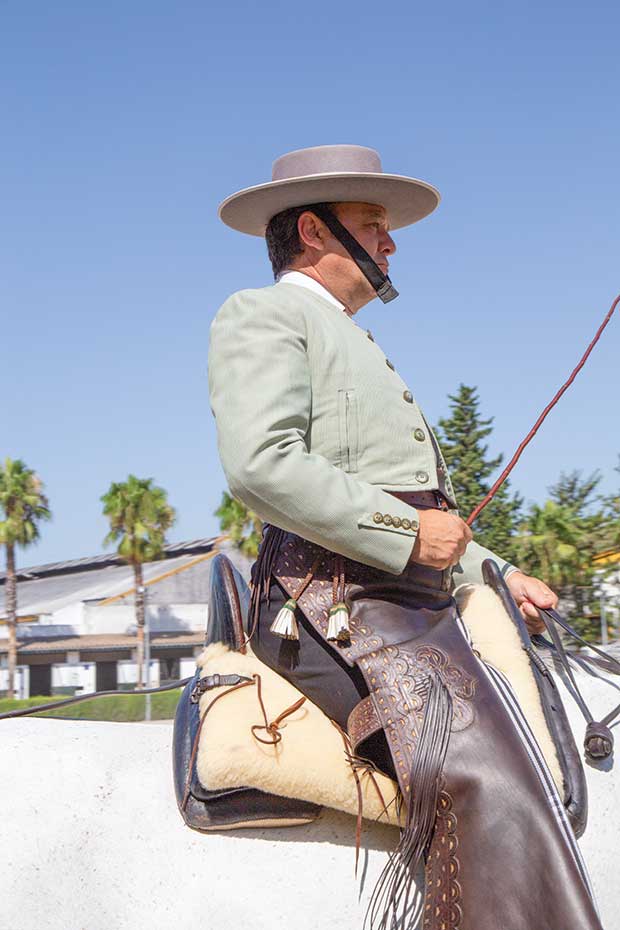 Jerez is a horse-mad town. Its equestrian shows are world-famous and book out months in advance.

While the town of Jerez de la Frontera siestas, a photographer discovers its rich history, wine, and equestrian culture.

A bout of heat-induced delirium has hit Spain. The temperature is above 40 degrees Celsius, and only “poco loco” folk are out in the afternoon sun. From the
window of the train from Seville to Jerez, olive trees dance in the shimmering heat. A solitary farmer driving his tractor through the arid fields leaves a trail of golden dust.

In Jerez de la Frontera, more commonly known by its abbreviation Jerez (pronounced Hereth), cobbled streets, normally clattering with horse-drawn carriages, are quiet. The dozens of equine statues around this horse-loving city are covered in yellow powder as though they have just ridden in off the plains. The town siestas behind dust-covered shutters. 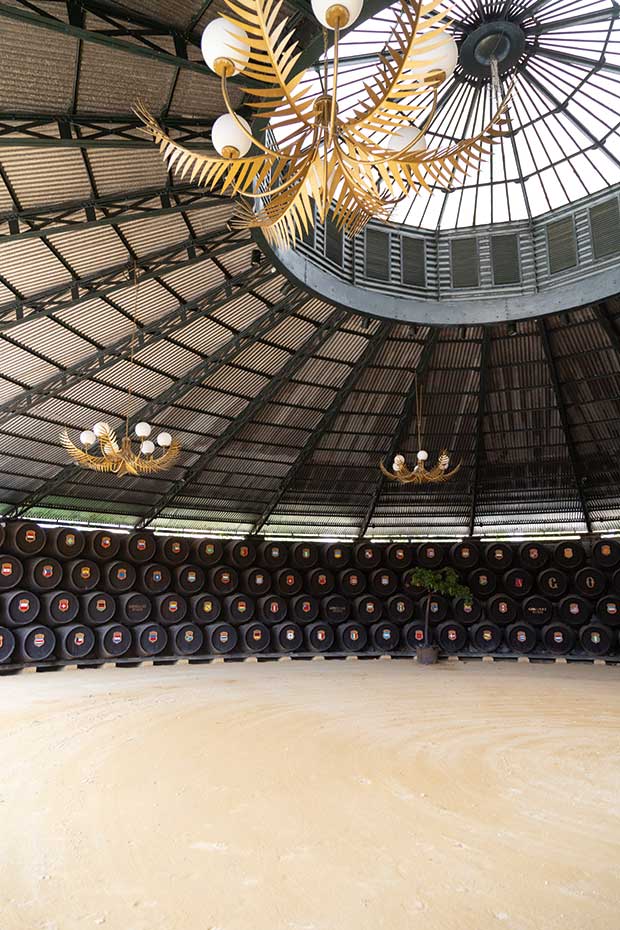 The González Byass bodega was founded by Manuel María González Angel and his English agent, Robert Blake Byass, in 1835. Its glass-roofed La Concha was designed by Gustave Eiffel, and built for Queen Isabella II’s visit in 1862. It houses more than 100 sherry barrels marked with the flags of the countries to which it exports.

But my busy itinerary allows no time to sleep, so I set out in the sauna-like heat to explore the Alcázar Jerez de la Frontera. The Almohad rulers of southern Spain built the grand Moorish palace and fortress in the town’s centre in the 11th century. The original octagonal tower, mosque, gateways, the Pavilion of the Dona Blanca and bathhouses still survive. The thick stone walls offer not only a respite from the heat but also a chance to see the details of the domed mezquita (mosque) and ornate mihrab (alcove) up close.

Off the mezquita, dark, windowless rooms that lead to Arabic baths are illuminated by star-shaped holes in the ceiling. It’s beautiful and peaceful. The gardens within the alcázar are centuries old, but the system of rills that hydrate the pomegranate, fig and olive trees are a smart way to manage water in the hot climate. 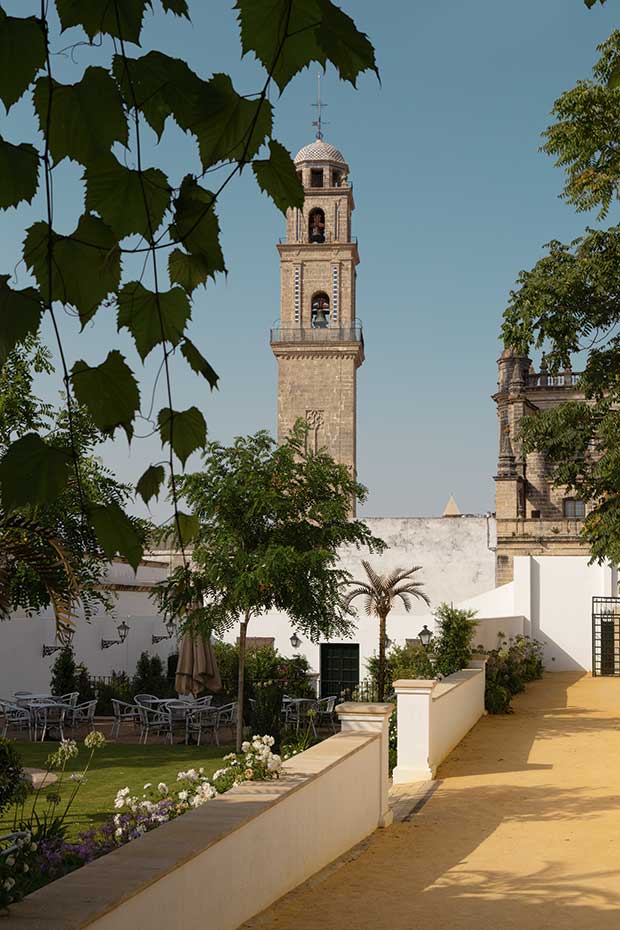 The presence of Christianity and Islam is visible in the architecture of Jerez. The Cathedral of the Holy Saviour was built in the 17th century and towers over the alcázar, constructed in the 11th.

From the tower above the fortress walls, the city’s clash of cultures is ever-present — an Islamic minaret was converted into a bell tower after the town’s Christian conquest in the 13th century. Now the signs of modernity invade the city — wind turbines are visible on the hills in the distance and the famous sombrero-wearing, guitar-slinging mascot of the Bodegas Tio Pepe peeks from the rooftop. Horseshoe archways were popular with Moorish architects in southern Spain from the seventh century onwards.

Jerez means “sherry” in Spanish and Bodegas González Byass, commonly referred to as Tio Pepe, is Spain’s most well-known sherry bodega. Tio Pepe was founded in 1835 and consists of five bodegas — the large storage houses where sherry is aged and matured.

The complex is so vast it requires a train shuttle to move around the bodegas (Constancia, Apóstoles, Cuadrada, Concha and Lepanto). The sherry here is nothing like what grandma used to drink; the fortified wines come in many varieties — creamy, sweet and mouth-puckeringly dry. 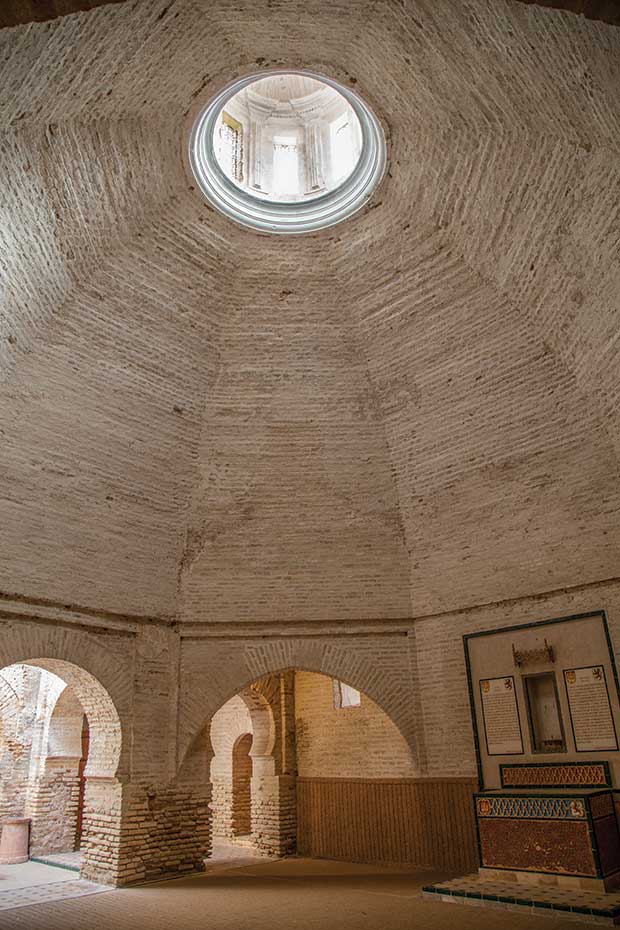 Jerez once had 18 mosques but only one remains, the Alcázar Jerez de la Frontera.

The glass-roofed La Concha, designed by Gustav Eiffel, was built for a royal visit in 1862. There are more than 100 barrels inside, marked with the flags of all the countries where the sherry is sold.

The Lepanto bodega is famous for its brandy-distilling area, and its blackened walls tell the tale of decades of “angel’s share” evaporation. On average, five per cent of the alcohol evaporates each year from the barrels (and heads upwards to the angels), staining the walls black. Maintaining the barrels — some decades old — is an art form in itself. 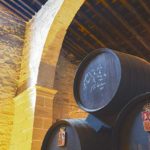 A sherry barrel signed and illustrated by the artist and writer Jean Cocteau at La Cuadrada. 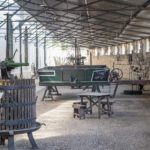 Antique wine-making equipment at Tio Pepe. Sherry has been made here since 1835. 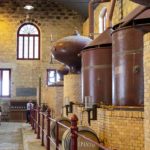 The Lepanto Room in the brandy-distilling area of González Byass is where the famous Lepanto O.V. is made. The walls carry a harmless naturally occurring mould;

Bodega de Los Apóstoles houses “The Christ Barrel”, bigger and more glorious than all the others in the bodega. It’s also home to the 12-apostle barrels, filled with one of the best Jerez wines, Palo Cortado. (There’s no Judas Iscariot barrel as superstitious locals claim one would turn the wine to vinegar.)

The mice at the Cuadrada bodega used to be partial to a drop of Solera 1847 cream sherry, but these days they are teetotallers. The monk, José Gálvez, started the tradition of feeding the mice food and sherry from a goblet, accessed by a tiny ladder. The tradition was stopped due to animal welfare concerns — although Mateo, our guide, claims the mice never complained. In the morning, the smoking chimneys of the restaurant Churreria Manuel signals the town has awakened. The smell of sweet vanilla churros and strong coffee fills the streets.

After coffees, the local la donas gather in the Mercado de Abastos market to buy fresh produce and seafood. Dressed identically, with no-nonsense haircuts and plain pastel cotton shift dresses, they squeeze, prod, and sniff out the market’s prize produce. Once a decision to purchase has been made, it’s time to chat, scold and coquettishly haggle with the young, male, seafood stallholders. 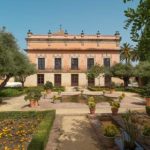 Fountains are often found at the centre of an Islamic garden, representing God’s mercy in arid regions. Eight-point stars are another common motif and symbolize paradise. 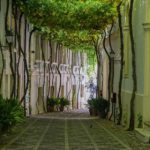 They leave the market pulling trundlers that bounce with an exaggerated clatter over the uneven cobbles, while I head to The Royal Andalusian School of Equestrian Art. The horse-riding tradition of the town goes back to the 1400s; Jerez is the original home of caballo cartujano, the Carthusian sub-strain of Andalusian horses. Carthusian monks protected the caballo cartujano bloodline, even disobeying a royal order to breed the Neapolitan breeds instead.

More stories you might like:
The outback, history and scenic views: The Wool Wagon Pathway certainly packs a punch in Western Australia

The horse show rivals the Spanish Riding School of Vienna and the sound of jingling brass bells attached to the horses’ manes echoes around the arena. Both rider and horse display a high level of skill as they perform routines coordinated to music. The crowd applauds at the capriole, a move where the horse leaps into the air kicking its hind legs, before landing on all four legs. 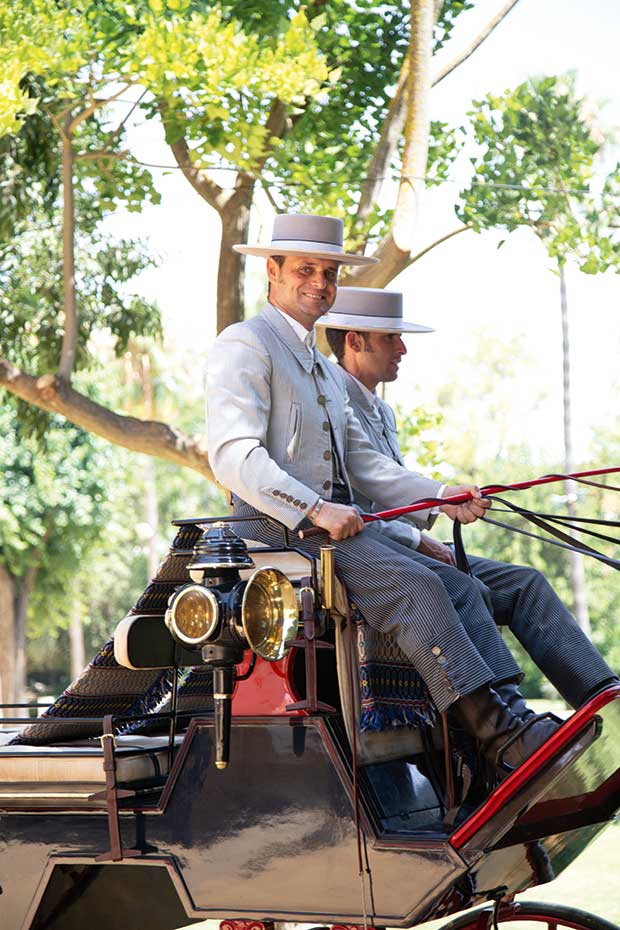 The Traje Corto Vaquero costume, with its signature wide-brimmed hat, waistcoat and turn-up pants, has been worn by drivers since the 19th century.

But outside the arena, something truly magical is happening.

In the training ring, a man is riding a white horse with his eyes completely closed. As they circle and weave their way around, man and beast become increasingly in tune with one another. 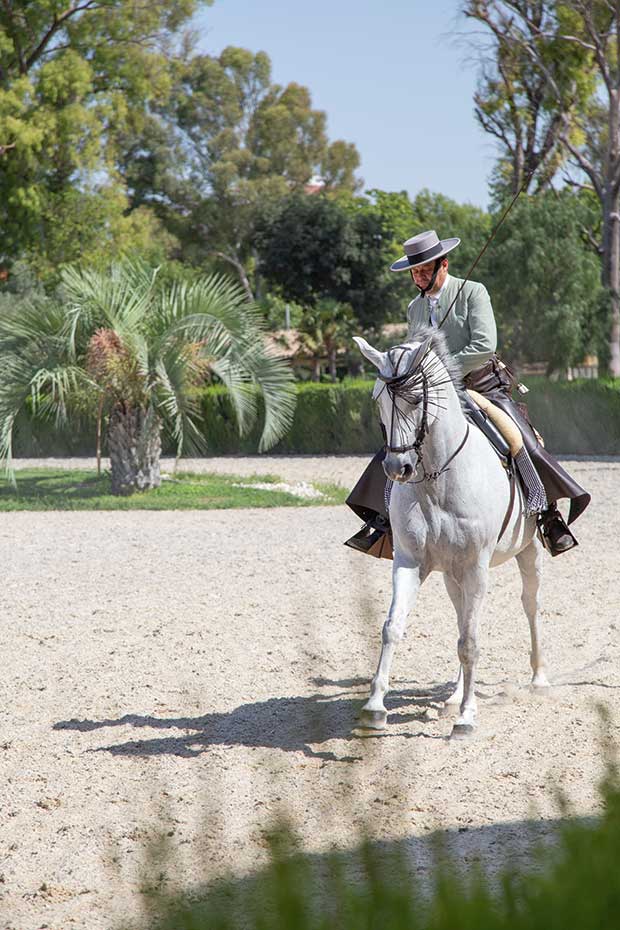 It’s like a horsey version of sleepwalking, hypnotic to watch.

Admission to the school includes access to the grounds, the outdoor exercise rings, the saddlery, carriage museum, stables and tack room. The saddlery is also a school where students spend five years learning the art of making bespoke harnesses and saddles. 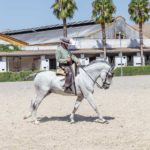 Outside the arena, a rider closes his eyes to try to get in rhythm with his horse. 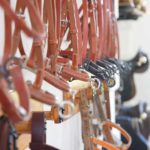 Students study for five years to learn the art of crafting leather. 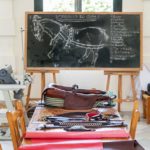 Harnesses are made and repaired in the saddlery where the master harness-maker oversees his apprentices’ work with careful attention.

Day-tripping tourists from Seville flock to see the action and, at showtime, horse-drawn carriages are plentiful. But exploring a horsey city without a horse over several days has revealed a rich history, beautiful architecture, and — best of all — sherry, delicious even in the heat.

Getting there: Flights from New Zealand to Jerez go via Madrid.

Where to stay: The town itself is small and easy to get around, but it still pays to be central. Try the Inca Hotel, a converted 19-century convent eight minutes’ walk from the central train station. The Casa Grande is another genteel heritage hotel (a former 1920s-era residence) close to the action.

Food: Seafood is exceptional thanks to Jerez’s proximity to renowned shellfish regions such as Sanlúcar de Barrameda, famous for its prawns. Jerez also boasts great spots for tapas, such as the stately Plaza del Arenal or the cosy, romantic Plaza de la Yerba. 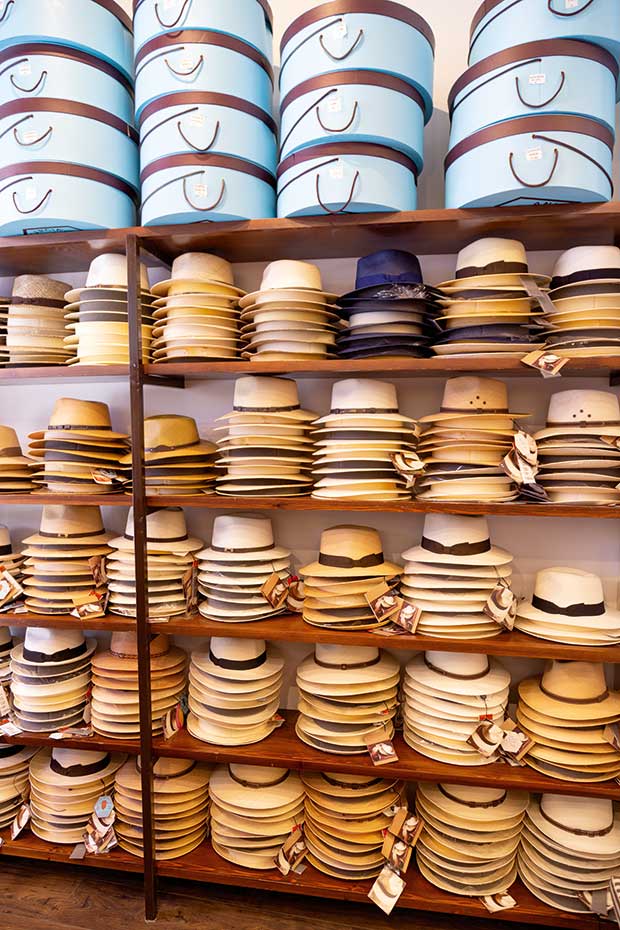 Hats at Antonio Garcia have been made by the same family for more than 100 years.