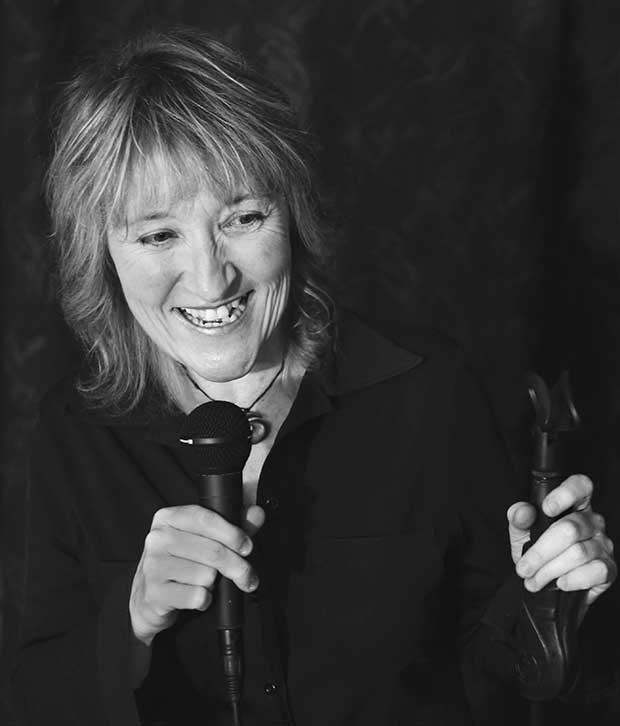 A comedy newcomer has always felt at home on a stage, be it pirouetting to the tune of Tchaikovsky or tickling audiences’ funny bones.

Sacha Jones’ neighbours know when she’s testing a new routine – her tabbies scramble out the door and bolt down the street. Her vibrating amplifier inevitably sends Tiny and Trixie running at every living-room rehearsal.

Luckily the stand-up comedian doesn’t take her pets’ reactions to heart and the crowds at one of her Auckland-based gigs make for more attentive audiences.

Following that first gig at The Classic comedy club, she performed on its stage once a month. She says her age is an advantage in stand-up. “Life experiences make you funny, and I’ve had plenty of those as a middle-aged, married woman.” Not many comedy newbies could joke about menopause or motherhood.

It was Sacha’s knack for storytelling that led her to the laughter game.

In 2016 she published a memoir, The Grass Was Always Browner (with Finch Publishing in Sydney), and noticed people chuckling during her speech at the book’s launch. When people commented on her humour, it prompted her to think about stand-up.

Creating six-minute sets for open-mic comedy nights was no challenge; tales from her suburban Australia childhood provided enough material to fill an hour. Her escapades include jumping the fence of a crocodile enclosure and pinching a Christmas turkey to wolf down.

More stories you might like:
How Brooke and Maggie Noonan swapped their Auckland Zoo jobs for off-grid living in the Far North

These days she writes in her home study on Auckland’s North Shore, which gets messier each year. “I seem to write better submerged in chaos.” The bulk of her hour-long show (The Egg and Sperm Race), performed as part of the Fringe Festival, was written in a few days. “Inspiration comes from my often-crazy life, both from when I was young and my current life too.”

When Sacha isn’t rehearsing sets in the living room, and sending the cats scattering, she uses the beach as her practice pitch. “People on the beach think I’m quite mad, as I speak the set loud(ish) to hear it. But I’m almost old enough to pull off the doddery-old woman-who-talks-to-herself routine. Almost.” This mother of three was on stage long before stand-up.

Sacha spent her youth training to be a professional ballerina, despite her Russian teacher’s declaration she was the wrong shape. Her grit has been shaped by experiences such as dancing the role of Giselle at 17 with the Sydney City Ballet – a grueling 23 times in one season.

An Achilles tendon injury ended her ballet career and, after settling in New Zealand with her husband, she enroled in political studies at the University of Auckland. She spent the next decade raising three children and completing a PhD with a thesis focusing on abused women.

There were birthday party preparations spent whipping up cupcakes while contemplating political-theory essays.

Sacha has drawn her career path along the route of female empowerment. “Everything was male-centred growing up – it was always rugby and cricket on TV – so I think I sensed back then that something was a bit out of kilter. Ballet was the first thing I came across that was female-centred, so it felt important.”

Sacha says women are changing New Zealand’s comedy industry. “Stand-up used to be blokey with crude jokes, but now it’s cleverer, because there are more women in it so there’s less room for sexism.”

In ballet she took a curtain call, her memoir earned reviewer critiques but comedy routines are followed with instantaneous feedback. There is no predicting how an audience will react.

“It’s slightly nerve-wracking, but that immediate feedback is so great. It’s direct and honest, and that’s how I like it.”

Comedy clubs are very receptive to newcomers of all ages.

“Once you build up the courage and find the time, you have nothing to lose really by giving it a go.

The older you are, the more experience you have to make good comedy from, and maybe the less seriously you take yourself, which is also important for finding your “funny”.  If you have kids there’s plenty of scope for fairly unexplored comedy material there too.”