From Berlin to Blenheim: a 1974 Mark 1 Ford Capri on the road again 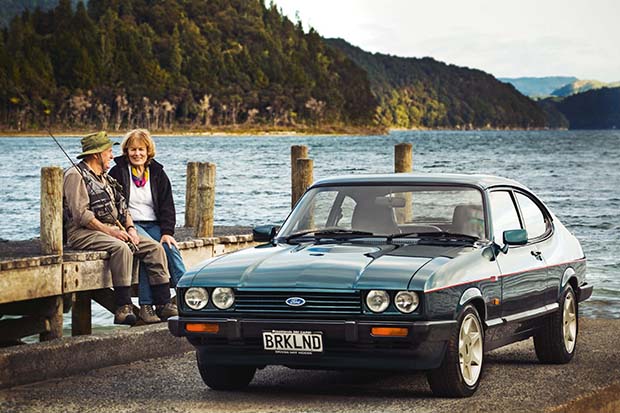 He wanted a race car, she wanted a comfortable ride, turns out the 1974 Ford Capri was the car they didn’t know they always wanted.

It started with  a sore back and a numb bum. Wedged into the passenger seat of a road-registered 1974 Mark 1, 3.0 Ford Capri race car on a road trip to Blenheim four years ago, Southland-born Adele Lyons’ bonhomie wore a little thin.

“It was like travelling in a tin can. I had to clamber over the roll bar to get out, there was no suspension and you had to shout to be heard. We were an hour south of our home in Ngongataha heading to a Capri event. I said, ‘I don’t know if I can do this. We need a nice comfortable car.’”

Behind the wheel her husband Lindsay hollered in agreement. He’d bought the stripped-out race car off the side of the road for Targa rallying and racing. Its modification acted as relaxation time away from fishing guiding and hosting at the couple’s anglers’ lodge on the shores of Lake Rotorua. 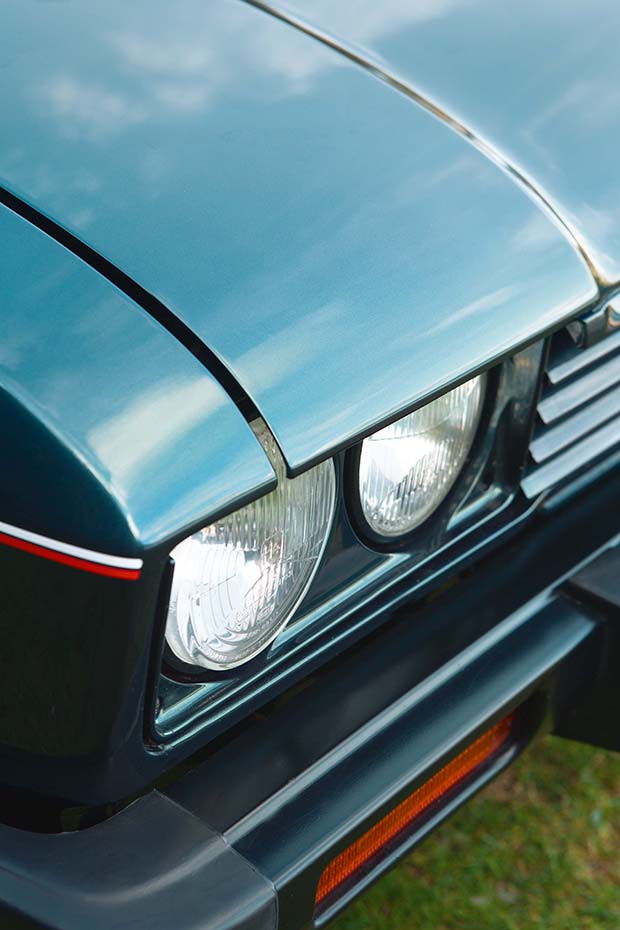 With consensus on the need for a comfortable car, there was no conjecture on breed. Adele and Lindsay are Capri crazy. “Their stylish lines, their iconic design – such a cool era and a cool car,” says Adele. Their cache of Capri treasure comprises a 1977 JPS Special “gloss black with gold stripes”, a 1977 Capri Ghia “unique and sought after” and a 1974 Mark 1 shell “a project in waiting”. Then there’s 28-year-old son Paul’s 1974 Cosworth turbo Capri “a stunner” and 24-year-old daughter Hannah’s 1974 XL “it runs like a Swiss watch”.

With a search underway for Adele’s “proper nice car” the stakes were raised. “We decided we’d try to find a model with a serious point of difference – a 1987 Mark 3, 2.8 V6 special Brooklands edition,” she says. Not the easiest task – only 1038 were ever built. 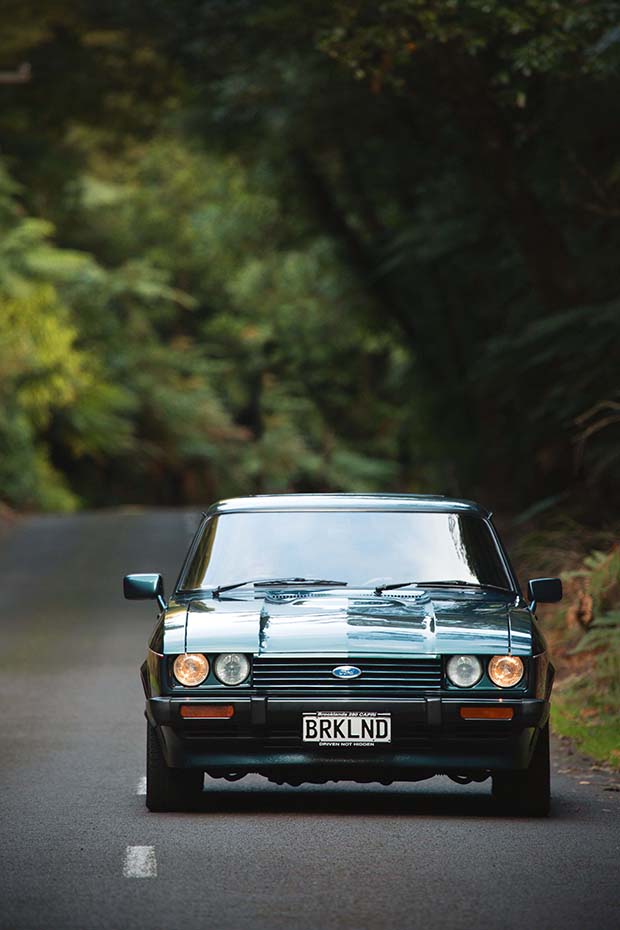 The high-spec 1987 Brooklands model was built to salute the end of Capri’s illustrious manufacturing run. Eighteen years earlier Ford had unveiled the Capri model at the 1969 Brussels Motor Show as Europe’s response to the Mustang. Built in Dagenham and Cologne it merged dependable mechanics with three-door fastback magic.

Advertised as ‘The Car You Always Promised Yourself’, Ford did its darndest to fulfil the pledge by churning out endless trim and engine options for all pockets, and despite early quips about it being a Cortina in drag, pockets opened. The Capri was a hit and almost two million sold. But the 1987 Brooklands is universally hailed as the crème de la crème.

With only five examples in New Zealand, Lindsay and Adele set their sights on England. And when the phone rang at midnight in Ngongotaha it was London calling with good news.

“A friend and fellow Capri nut based in England checked out possibilities. He had seen what was to become our Brooklands in Surrey. The message in the middle of the night was ‘this is it’.” First registered in Berlin, the pristine machine had been owned by a German-based officer in the RAF who brought it to England in 1990. Its storyline spans dedicated owners, a stint at Surrey’s renowned Brooklands Museum, nine years on display at the Stondon Transport Museum and a cracking list of credentials – low mileage, leather upholstery in beautiful nick, unique Brooklands Green metallic paintwork, uprated suspension, five-speed transmission, LSD differential, 50-series low-profile tyres on alloy wheels and a full service history in its original Ford plan book.

Funds were transferred, bags were packed, and flights were boarded. “It was surreal when we finally saw it. It was parked outside the little German hotel where we were staying in the village of Nürburg. I couldn’t believe it was ours. Our London-based friend brought it over so we could drive it on the famous Nürburgring race circuit. Each lap is 26 kilometres long. We did five laps and, despite rain and a slippery surface, it was wonderful and performed to our expectations.”

And it continued to do so – aside from a small fuel-pump issue – as the couple travelled onto England and to Doc Martin’s Cornish countryside, drove onto the remains of the legendary Brooklands banked motor-race circuit, and then delivered the coupé to Gravesend-On-Thames for a container ride home. 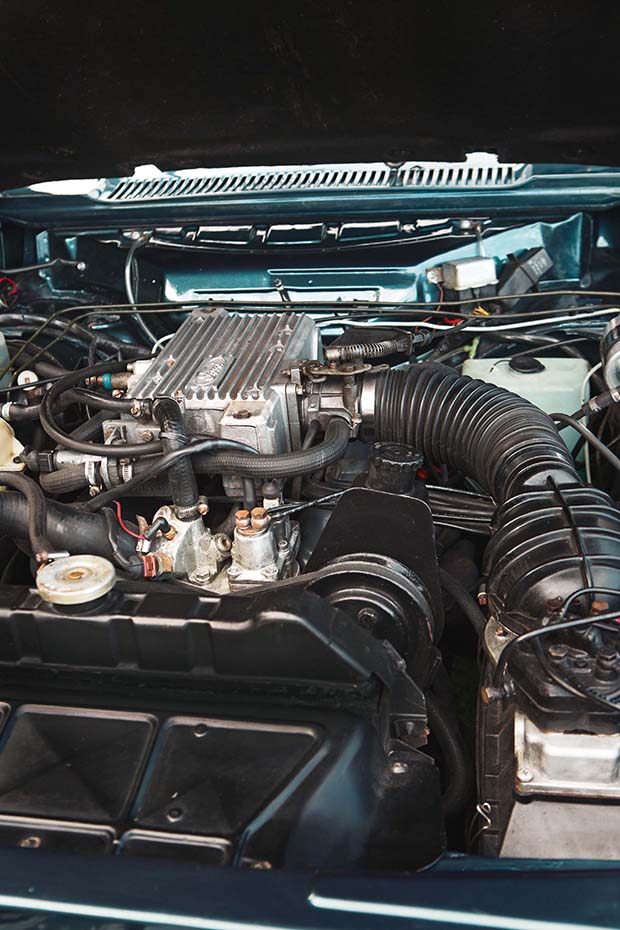 Lindsay made modifications to the car including removing the rust, sandblasting the chassis, and fixing its mechanical hiccups.

But back in Aotearoa the dream run ran aground. The minor fuel-pump problem lingered, its speedo malfunctioned, the heater fan seized, several tiny spots of rust irked. “I came home from the school where I teach and there was my most precious car with six million wires hanging out from the dash,” says Adele. “It looked like an IQ test doomed to failure. I thought, ‘I only hope Lindsay’s drawn a diagram.’”
She held her breath. Lindsay winched the Brooklands onto a trailer and took it to a workshop in town. Over the next six months he stripped it out, removed the rust, sandblasted its chassis, under-sealed it, took small bumps out of body panels and fixed its mechanical hiccups. 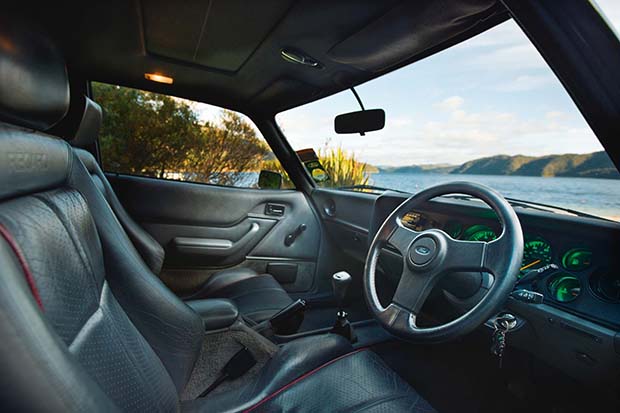 “It’s now more beautiful than ever and I’m so proud of Lindsay’s achievement,” says Adele as the Brooklands bolts across a valley west of the lake. “It’s highly geared so I sit in third or fourth around town. It loves the open road. Its ideal speed is 115kms,” she says.

The ride is low to the ground, handling smooth and superb – it boasts power steering – and the engine is guttural. Adele’s Capri is number 979 in the celebrated limited edition of 1038 Brooklands ever made. One of this special series recently sold at auction in England for $125,000.

As valuable as the Brooklands may be, Adele says her set of wheels is to be driven not hidden. “I love its rich history, its fantastic Brooklands colour and its comfort factor – no more sandwiching into seats or sore bottoms – and it’s amazing to drive.”