Blog: no such thing as lazy summer days


Lazy summer days? Huh. For Polly and family the warmer months are too busy spent making hay while the sun shines.

While summer is a season of leisure for some, it’s a time of industry in our valley. No one warned us of this when we signed up for the self-sufficiency lark. Of course it’s all there in the fine print – the need to spend sunshine months engaged in the unremitting toil of preparing firewood, building, repairing, tending gardens and orchards, preserving and generally getting things done. But six years ago when we arrived on the land, James and I were too busy being idealistic to pay attention to details. 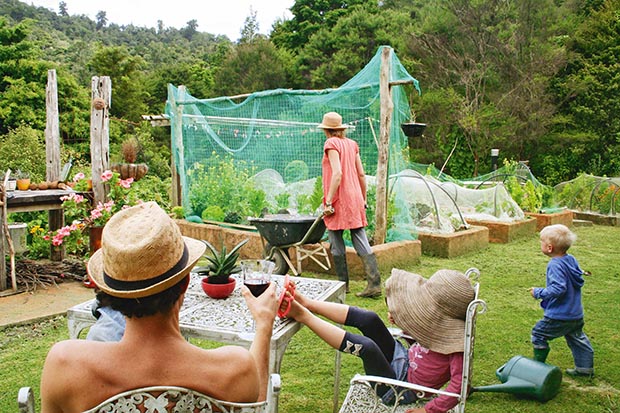 Out here in the back of beyond, there are no neighbourhood Joneses to keep up with, but we do have inspirational off-grid residents nearby who annually produce 80 per cent of the food they consume. That first summer as James and I sprawled in our hammocks back from overseas and celebrating the start of our Good Life, it dawned on us how busily those people were beavering in their gardens. Summer, we’ve discovered, is the season of plenty. The workload is liberal but as a reward so are the harvests. During sweltering days when the land, held by cradling hills, feels as dankly green as a tropical armpit, our outdoor larder is alive and growing. Almost before our eyes, tiny fingers of beans and cucumbers swell into arm-length giants while club-like courgettes are the family’s gross domestic product. In the kitchen, baskets overflow with fat plums, furry peaches, tart new apples, wine berries, green beans, tomatoes and shiny purple aubergines.

More stories you might like:
Lee-Anne and Todd Jago talk about finding their tūrangawaewae and launching Maori tourism business Waka Abel Tasman

Beyond opened windows, the air is just as full; humming and streaking as insects rush to achieve. Bush flies, mason bees, crickets, sand flies, newman wasps, cicadas, honey bees, red-winged critters… Everywhere teems with such entomological variation I suspect we may be harbouring insect species that haven’t yet been scientifically discovered. The only creatures not slogging it out at our place are the summer friends who arrive each year with their deck chairs and chilly bins for a spot of rural relaxation. “It’s so restful here,” they call from beneath the gazebo as they tuck into a spot of brunch. Hastening past on the way to somewhere else, James and I nod in dubious acknowledgement. Our day began hours earlier as we watered the gardens while tuis rang in the dawn like ethereal alarm clocks. From their ringside sun-loungers our friends bare their flesh to the sun and watch as we harvest the next meal’s salad, occasionally photographing us in action in order to remember the bucolic scene. Sometimes they’ll be seized by a blindingly good idea.
“You should put in a light display across the valley. If you mounted coloured LEDs on poles, you could light up different trees at night.” “It wouldn’t take much to build an aerial walkway over that gully. Looking down on the trees would be awesome.”
“You should put in one of those hanging fireplaces instead of your woodburner. That would really suit this place.”

Inwardly guffawing, James and I pretend to consider such suggestions. Before bed, as our guests sleepily bid their goodnights, we again head outdoors with headlamps on to wage war on the mystery beetles that swarm from the forest every January to obliterate the orchard’s foliage. Last summer, two green frogs accompanied us on our squash-and-kill campaign, pulsing out a rhythm to the warm, starlit nights as they perched on the sides of the paddling pool. Time passes. Whole weeks go by during which we barely enter the house save for sleep. As the golden days seem to stretch onforever, we begin catching glimpses of time in which to relax. Then I ask our self-sufficient neighbours what they’ve been up to and ascertain they’ve already switched into autumn’s tasks. “Our leeks are in,” they’ll declare. On and on it goes; the seasonal rhythms endlessly rotating like spokes on a slow-turning wheel. Learning to live by this primal clock keeps us busy but it’s both grounding and a joy.