Blog: When online shopping leads to a punch in the face


Why all-terrain roller skates are no match for a goat track in the Far North.

Before James and I shifted to the Far North, our expectations of the region’s climate were raised to foolish heights by its marketing slogan.

Disappointingly, ‘The Winterless North’ is a misnomer and woollen hats, polar fleeces, slippers and jerseys are what we find ourselves wearing now the season has turned. While I suppose the weather could seem ‘winterless’ compared to someone hunkering down in Antarctica, it’s cold and wet just the same. 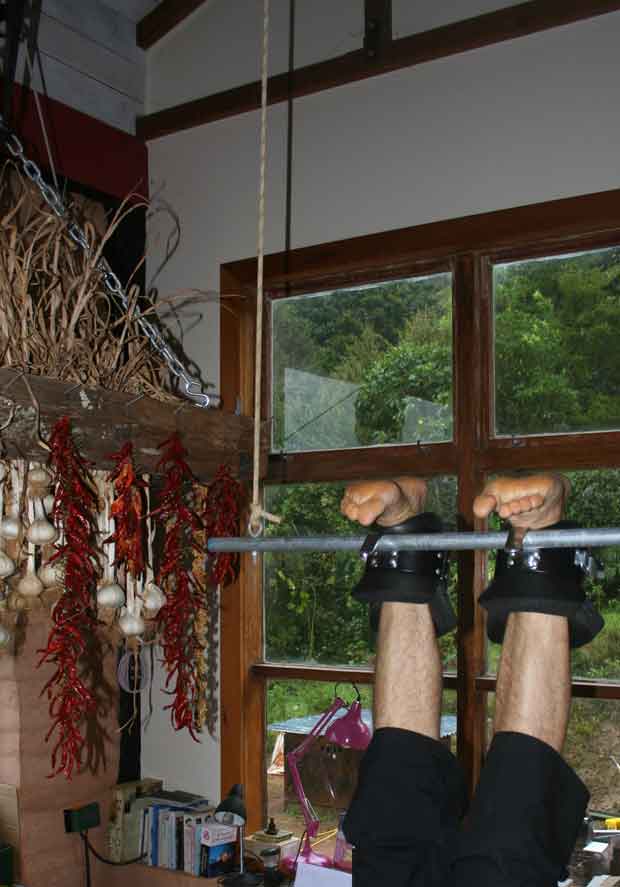 James hanging with his inversion shoes.

Some populations hibernate their way through long dark nights. Others hunker by the fire with books and movies, but thanks to recent improvements in online connections, the people of our valleys are whiling away wintery nights with a spot of retail therapy.

With swollen streams preventing some of us from getting out, and lean merchandise pickings on offer in local shops anyhow, sensory deprivation is making for some rather colourful online purchases.

A friend living kilometres up a goat track was seduced by a pair of all-terrain roller skates. A little shame-facedly she confessed to visions of herself skimming blithely over ruts and rocks on her way to the letterbox, but unfortunately, the monstrous contraptions got snagged on the very first bump, and she’s retired them after a painful fall.

James recently became convinced that hanging upside down for ten minutes a day will see us into long, lithe lives and announced he’d bought some inversion boots. He hung a trapeze from the rafters and spent some thrilling moments swinging dangerously back and forth, thrashing his legs wildly and knocking over a chair before succeeding in clipping the boots over the bar.

Zen, nearly two, was so excited to see his father swaying upside down that he rushed over and punched him on the nose. Howling with laughter, the children watched as James, spraying blood, then flailed about in an attempt to get himself back on the ground. He’s now scanning Trade Me for an inversion table instead.

A different friend has bought an egg incubator and is nursing plans to breed unusual chickens; another’s waiting for the plastic beehive she’s ordered – just turn a tap and the honey flows out. A man down the valley has bought himself a ‘51-piece hobby knife set’, while someone else we know has sent away for an electric back massager.

Judging by the profusion of parcels waiting down by our communal letterbox outpost, plenty of other online shoppers have optimistically been hitting the Buy Now button too.

Perhaps we should start planning a collective garage sale for the summer.