Polly gets wet feet during the storm and discovers she has to reap what she sows.

Last week the weather system known as the Tasman Tempest emptied like some giant’s bathtub upon us. Thundering onto the land like a waterfall, rain enveloped our house in a ricocheting white haze, instantly flooding the site while spontaneous rivers cascaded down banks and poured from overflowing drains. Pumpkins on the rack.

The volume of water was astounding. Half swimming our way to the car, we headed down the muddy streambed that used to be our driveway to find our path blocked by a vast brown snake of water surging endlessly over the road. Never have our creeks climbed so high.

The flooding has been significant. Streams have changed course, mud has been dumped, and friends’ roads and gardens have been swept away. Yet despite our access road becoming even more of a goat track since the deluge, James and I have witnessed the prolonged storm with an air of calmness. Had it come a month earlier, we would have been on red-alert, but the harvest was mostly in, and thanks to some outside help, we could afford to relax. 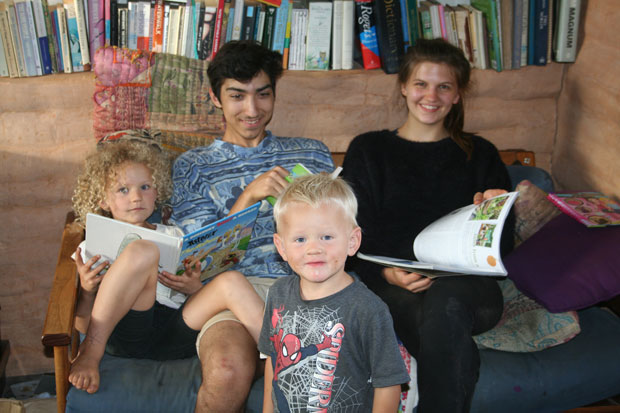 HelpXers Kenzy and Palina with the children.

During the weeks before the bad weather, our home took on an international flavour with four young foreigners swelling our ranks. Answering our call for assistance on the HelpX website, the French and Belgium travellers arrived with sleeves rolled and a cheerful willingness to dig. Working day after day in the vegetable gardens, they pulled hundreds of kilos of kumara, potatoes, pumpkins, beans and onions from the soil.

To be honest, I’d had no idea of the work required to become more self-sufficient. When our gardening neighbour Dave had suggested creating a community garden last spring, James and I had jumped at the chance to learn more under his tutelage. The thought of never buying another potato felt like a liberation, and it was immensely satisfying viewing the long rows of crops as they grew from the land, (although the weeding required did make me secretly long for the ease of purchasing other people’s produce). 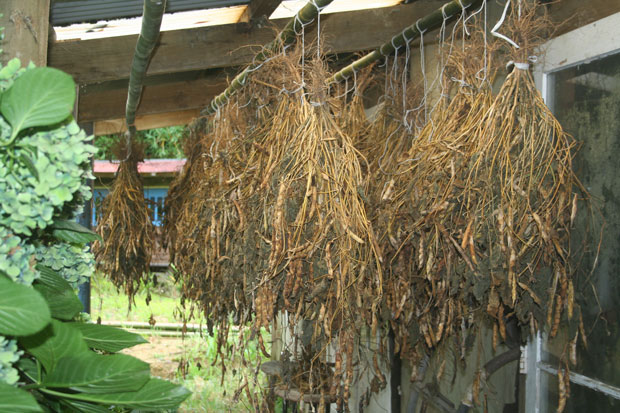 Borlotti beans hung up to dry.

But as plants matured and Dave spelled out the harvesting timetable, James and I could be heard taking quick shallow breaths, struggling not to drown in the volume of effort required. Soon it seemed, there would be no time for anything else – for building, or writing or even sleeping. We had planted vast quantities of seed, and if we didn’t now reap what we’d sown, it was going to rot in the ground.
The HelpXers moved in like dread-locked, guitar-playing angels. Our half-finished house may have filled to over-flowing but their presence banished nightmares of potato avalanches engulfing the family. Sometimes we had to dance around one another as we tried to move through the kitchen, but it was a laughter-filled waltz, while two-year-old Zen and five-year-old Vita couldn’t believe their luck to have four extra play-mates on hand.
It was a time of sharing and co-operation, and everybody’s good humour made it a pleasure. At night, after meals gathered from the gardens, our visitors sat around an outside fire, sometimes moved to silence as they took in more stars than they’d ever seen in their lives. Conversations ran like rivers; feeling their way into unchartered territory and gushing with a sudden flow as people fed them their thoughts and opinions. Everybody was learning from one another.
Gradually, the sense of harvest urgency began to pass. Under Dave’s instruction, beans were hung for drying, onions were sacked and potatoes and kumara graded into piles for planting, eating and storing. Drying racks were assembled from bamboo poles and chicken wire, laden with pumpkins and butternuts, while I bottled jars of preserves.
On one of the last nights, before our new friends all departed, we prepared a harvest banquet, celebrating the occasion with five different home-grown dishes. When forks were finally laid to rest, a guitar was reached for, and an impromptu concert began. Stillness descended over the table. Watching golden candle-light flicker over contented faces, I quietly hoped some interior gardening was in process; with memories getting sown of this magical time.