Coriander can be a little bit fussy to grow, but with the right care you can prolong leaf growth.

Coriander is two herbs in one. First, there’s the leaf. Pungent, herbaceous, spicy, slightly resinous, somewhat contentious. Coriander fans can’t get enough of it, ignoring the smell – variously described as repugnant, refreshing, like stink beetles, lemony – and adoring the taste.

My husband is one of these addicts. He will add coriander leaves to just about anything with a robust flavour or a chilli bite.

Even the unconverted would find it hard not to be impressed with the range of coriander-inspired dishes, from Latino-inspired salsa and guacamole to spicy Thai and Chinese fare. It features in Mexican, Peruvian, Indian, Egyptian, Moroccan, South East Asian and Portuguese cuisine, and is probably the most widely-used flavouring herb in the world.

Coriander has been used since Biblical times. The earliest evidence was found in a cave in Israel, possibly dating back as far as 7000BC.

By 1500BC it was well known throughout the Middle East and the eastern Mediterranean. The Greeks and Romans used it to aid digestion and to treat migraines, cramps and neuralgia. The Egyptians believed the plant had aphrodisiac properties.

My husband discovered the culinary wonders of leaf coriander early in our marriage, and spent 25 years converting me. He has succeeded. When it is not sprinkled over the various ethnic dishes he concocts, I find myself missing it.

The downside of this is that as chief gardener I am simply not allowed to run out.  “Have you put in more coriander?” I hear this all year.

I now sow it in rows like a vegetable, usually near a path for easy, constant picking.

To this end our garden is divided into coriander suitable-sites for different times of the year: a moist, cool, partly-shaded spot in summer, a warm sunny spot in autumn and spring, and the greenhouse for late autumn-winter. Keeping it cool seems to reduce its infamous tendency to bolt. 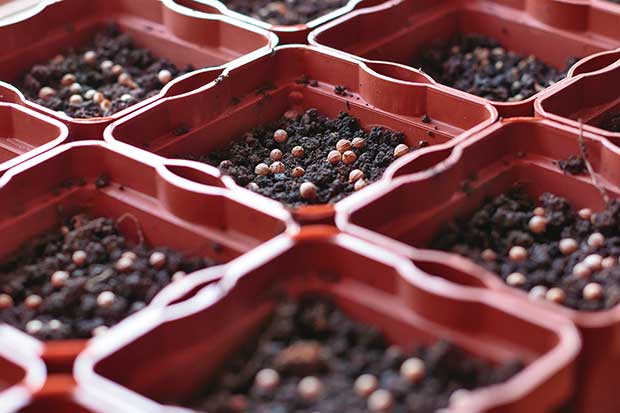 Coriander likes a light, moderately-rich soil, so add some compost.

Plants like to be well-watered and will bolt if water-stressed, or if they become too hot. They will also rot if waterlogged, so a well-drained soil is important. 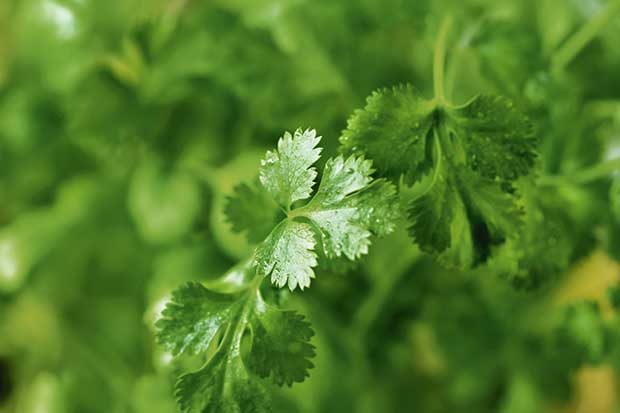 For leaf coriander it is important to choose bolt-resistant varieties such as Santos, Slowbolt or Indian Summer. Direct sow, as root disturbance triggers bolting. I buy bulk seed, which lasts several years.

For a continuous supply, sow every 2-3 weeks from spring to autumn outside, and in the greenhouse over winter. Seeds may take 10-15 days to emerge, but pre-soaking assists germination.

I sow 2-3cm apart in rows about 30cm apart, thinning to 7-10cm and eventually to 20cm, being careful not to disturb roots. We eat the thinned plants, roots and all.

Leaves are harvested as soon as they are big enough to use, about one month from sowing. Harvest by leaf, or cut-and-come-again, snipping 2.5-5cm above the base of the plant.

HOW TO GROW CORIANDER FOR SEED

I always leave a few coriander plants to flower and seed. Home-grown seed is delicious, and bees and beneficial insects love the flowers.

For the best seeds, plants should be uncut to allow resources to accumulate in the fruit. Flower stalks will grow to 60cm high bearing light, airy, white, parsley-like flowers.

Green seeds soon follow which turn buff in colour. Cut the stalks when two-thirds of the seeds change from greent o light brown. Tie stalks and hang upside down in a dry, warm, airy spot. The seeds couldn’t be more of a contrast in taste to the fresh leaf. They are hard, round, and peppercorn in size when dried, with a pleasantly sweet, orangey-nutty flavour.

They have been used as a spice since ancient times and were used as sweets, rolled in a toffee-like coating and chewed after a meal to aid digestion, especially of carbohydrates. The green seeds are more intense and spicy and are used differently. 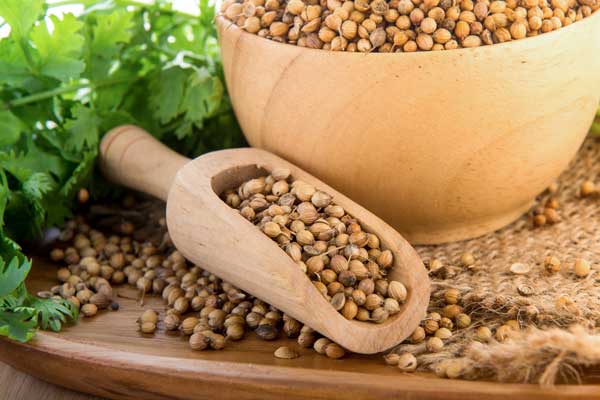 The sweet orangey-nutty smell of the seed comes from aliphatic aldehydes in the oil canals of the leaves and the outside of the green, unripe fruit or seeds As seeds ripen to golden-brown, the oil canals flatten and the ‘objectionable oil’ evaporates, leaving the remaining smell from the oil canals in the centre, sweet and spicy with a slight bitter orange zest.

The unique flavour is delicious when used ground in bread, cakes, candies and biscuits, especially gingerbread, and in fruit pies and sponges. It pairs well with cooked apples, peaches, pears, mangoes and mulberries. The seed has been widely used to disguise the taste of bitter medicines. The seed oil is used in perfumes and to flavour sweets, cocoa, chocolate, tobacco and liqueurs and other alcoholic drinks.

Roasted seeds add a unique warm, earthy flavour to curries and are one of the main ingredients of the Indian garam marsala spice mix and chilli salsa. They also make a great pepper substitute. 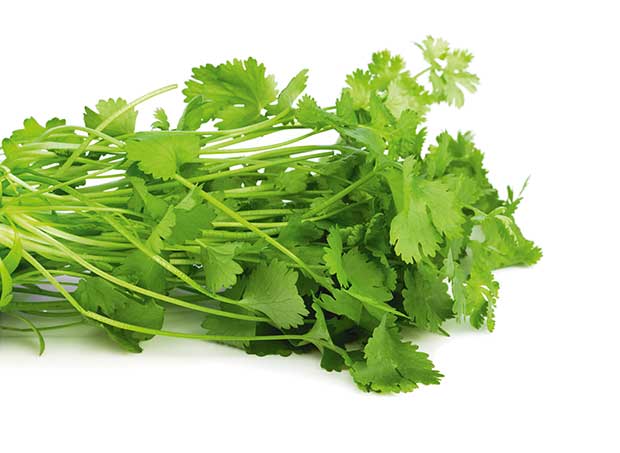 ◊ Coriander was sometimes called ‘dizzycorn’ because when freshly crushed and smelt it was thought to reduce dizziness.
◊ During the Middle Ages coriander was used in love potions and to cure a spotty face.
◊ The Chinese believe that eating coriander confers immortality.
◊  Coriander was an ingredient in eau-de-carnes, a liqueur made in Paris in the seventeenth century.
◊ Coriander may help clear the body of lead, mercury and aluminium.
◊  The seed can be chewed after a meal to help digestion and sweeten the breath.
◊ Problems with red spider mite? Apparently an emulsion containing 2% coriander oil will kill them.

The leaves are rich in Vitamin A, C, K and B2 and other antioxidants. The seeds contain calcium, iron and magnesium and have been shown to significantly decrease triglyceride levels and cholesterol in rats, while increasing HDL cholesterol. Anti-oxidant enzymes were also increased.

The seeds may have a mildly narcotic effect if taken in large quantities. Plant extracts have demonstrated antifungal and anti-bacterial effects on organisms that attack plants.

In India, coriander is a traditional treatment for diabetes and recent research has shown the plant has anti-hypoglycaemic properties, lowering glucose levels in the blood.

8 lessons to learn from a herb garden gone wild