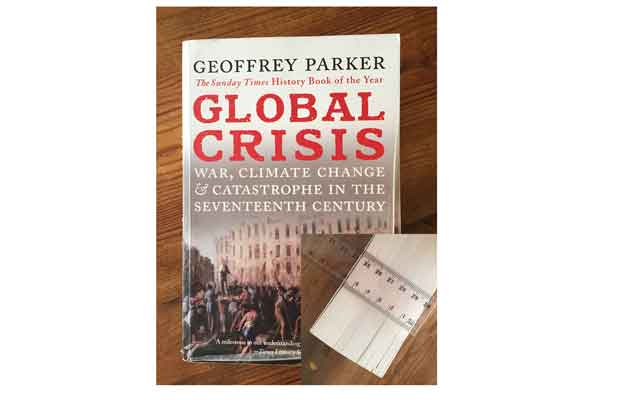 Book reviewer Rosemarie White says this 672 page book is worth its weight in gold (even if it doesn’t fit in her handbag).

If you think times are tough, the economy shaky, Winston Peters lurching about the land threatening once more to hold the balance of power, climatic change making the world perilous for humanity and fundamentalism set to take over the world, then you should be glad you weren’t living in the 17th century.

From 1610 to the late 1680’s a remarkable number of extreme weather events led the inhabitants of the known world to believe they were facing the end of days ‘If one ever had to believe in the Last Judgement, I think it is happening now’ wrote Judge Renaud de Sevigne, Paris 1652. Prolonged droughts, terrible floods, summers and winters so abnormally hot or cold that the like ‘was never known in the world before’.

The 17th century was a time of extraordinary political turmoil right across Europe and Asia, from the Thirty Years War, which laid waste to much of Europe to the overthrow of the Ming Dynasty. It was also the time of the ‘Little Ice Age’ which saw global temperatures lower than any time in the last 13,000 years. The ice on the Thames was so thick it could bear streets of shops. Crop failures – in some places the ground stayed frozen for two years – lead to widespread famine, economic breakdown, starvation and disease. It’s believed that a third of the population of the world died.

In China, a famine on the northeastern border triggered a series of events ending with the collapse of the Ming dynasty and the rise of the Manchus. In Szechuan alone, more than a million people died. Russia and Poland were riven by international war, internecine strife and a Cossack revolt punctuated by massacres of the Jews. The End of Days indeed.

Now, here’s an interesting thing. Despite geographical and cultural distances there were striking similarities in the political movements: the tendency towards moral panic and religious fundamentalism. Puritanism in England, Jansenism in France, Wahhabism in the Ottoman Empire. The lucky survivors of near-fatal cold, famine, war, outbreaks of the Plague and the Black Death found themselves taxed to the limit and forced into restrictive religions.

A grim story but a great book. With 662 pages Global Crisis is so big I was tempted to saw it in half with a bread knife to make it more manageable to read in bed but well worth the slog. And cheer up, things could be much, much worse.