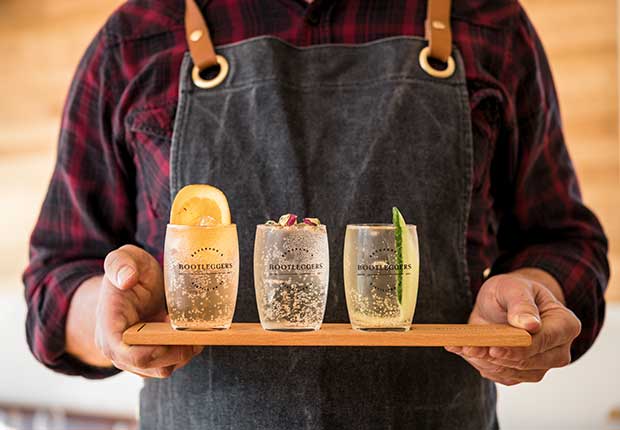 Former bartender James Waugh went underground to develop a range of Prohibition-inspired soft drinks that are mixing it with the best.

Many a business idea has been floated over strong drink, but few of them last longer than the resulting headache the next day.

In a lovely twist to the age-old tale, Wellington’s James Waugh got the idea for his business after a night mixing drinks for others.

James was a bartender at Wellington’s iconic Matterhorn in 2011 when it dawned on him that he had no idea what was in the dry ginger ale they used in cocktails.

“Mixers are pretty important because they’re a big component of what goes into a cocktail. At the end of one night I was drinking some dry ginger ale and it struck me, ‘What’s actually in this?’

I flipped it over and read the ingredients and still couldn’t work it out. It didn’t list ginger, or lemon, or lime juice, or anything you’d expect it to have. Straight away I thought, ‘That’s what I’m going to do. I’m going to make a decent dry ginger ale.’”

He went home and started putting in some research, discovering that dry ginger ale was the most sought-after mixer during Prohibition in the US. As a mixologist and devoted cocktail aficionado, James Waugh wanted to make sodas as special as the spirits they mixed with. His Bootleggers’ range has a soda for every spirit – and they’re good to drink straight too.

“Bootleg alcohol was nothing like what we drink now; it was so raw and volatile that you had to mix it with something for it to be drinkable. The best mixer was dry ginger ale, and since the breweries couldn’t make beer, lots of them switched to making it instead.”

More stories you might like:
How a terrier called Dunhill helped Angela Beer get her groove back

His interest piqued, James went underground – literally. He spent two years experimenting with dry ginger ale, lime and soda, and lemonade in the tiny basement of his Brooklyn home.

He’d devise recipes and tweak formulae by day, and bar-tend at night. After much trial and error, and positive feedback from friends, he came up with some Prohibition-inspired ways to get his sodas to a wider audience.

“That’s where the name Bootleggers came from: because I was making things in the basement and had this underground approach in that I didn’t want my idea to get out. I started smuggling my bottles into bars and to friends’ parties. People loved it.” 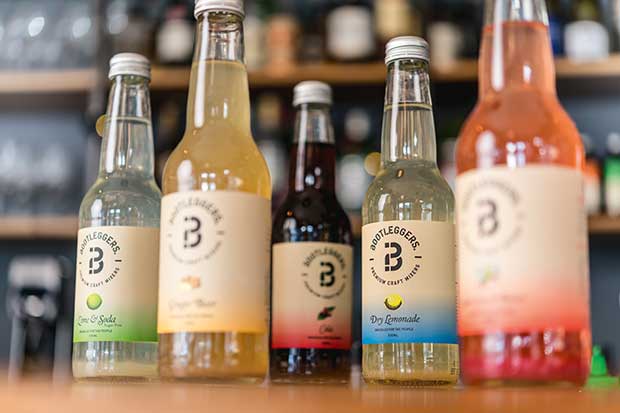 He says it’s the balance of ingredients and flavours that sets his drinks apart. The Bootleggers’ range contains about 25 per cent less sugar than mainstream brands.

“I wanted to reduce the sugar as much as I could and put in as many natural ingredients, because a lot of mixers are very sweet.

Flavours and extracts are expensive, so lots of mainstream producers put sugar first to boost the base flavour. In the 50s and 60s, when everything started to be manufactured in labs, they started making flavours that tasted like ginger or lemon because profitability came first. But the balance of ingredients is really important in a mixer.

I wanted to bring it back to basics. Your grandmother would make lemonade with lemon juice, sugar and citric acid, or ginger beer with grated ginger, lemon and sugar, with maybe some cinnamon or cardamom. That was it.”

Still, it wasn’t easy, starting a craft soft-drink business in a basement. “A lot of bottles blew up,” James laughs ruefully. “There were constant disasters.” 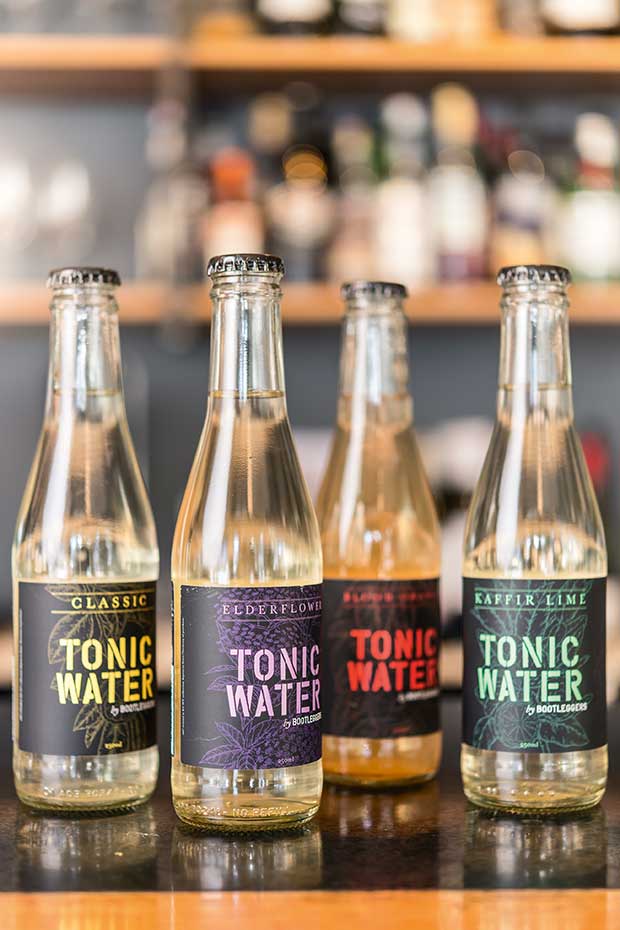 It quickly became apparent that he couldn’t brew in any great volume at his makeshift basement kitchen, so initial product runs were done in Eastbourne.

The first big batch – 800 litres – was made at Tuatara Brewery in Kapiti, then bigger runs done at Harrington’s Brewery in Christchurch.

Now the Bootleggers’ range, which includes a line-up of craft tonic waters, is produced in Motueka. James hopes to produce a little over 75,000 litres this year, which are sold around the country in bars, restaurants and supermarkets.

“I had wanted to create different styles of tonic to go with different gins for a long time, because there’s not one tonic that suits them all,” James says.

“When I started trialing them it was really interesting to see how people responded, because different people got excited about different flavours. The kaffir lime one is my favourite, but it depends on the combination. The blood orange one is amazing with Rogue Society Gin, and the kaffir lime is magic with Lighthouse Gin.” He says the popularity of gin and tonic ‘flights’, where drinkers can sample different tonics and gins in sequence, shows there’s still a place for cocktails in a market saturated with wine and craft beer.

“I love craft beer and I love wine, but I’d love to see cocktails come back. The gin renaissance is helping a lot. People used to drink vodka, lime and soda but now they’re asking for gin and tonics. When you drink a lot of craft beer you get a hops residue on your palate. A G&T is a good way to cleanse your palate so you can move on to something else.”

While James no longer has to smuggle his wares into bars or parties, he still has an elegant mobile cocktail cabinet in the back of his Mini Cooper. The ‘Boot Bar’ has everything a cocktail drinker could wish for – though its size is a reminder to James to concentrate on expanding his brand’s reach rather than its range.

“I had a bit of a sobering realization recently when I lined up all the products I’d made on a shelf and realized I’d created 16 different flavours,” he says. “One side of me was thinking, ‘you idiot’, but my creative side was thinking, ‘Wow, this is awesome.’

It’s better to have a concise focus from a business point of view, but people like to experiment and you want to give them interesting stuff. There’s only so much room on a shelf, but people know what tastes real and they want real flavours.” 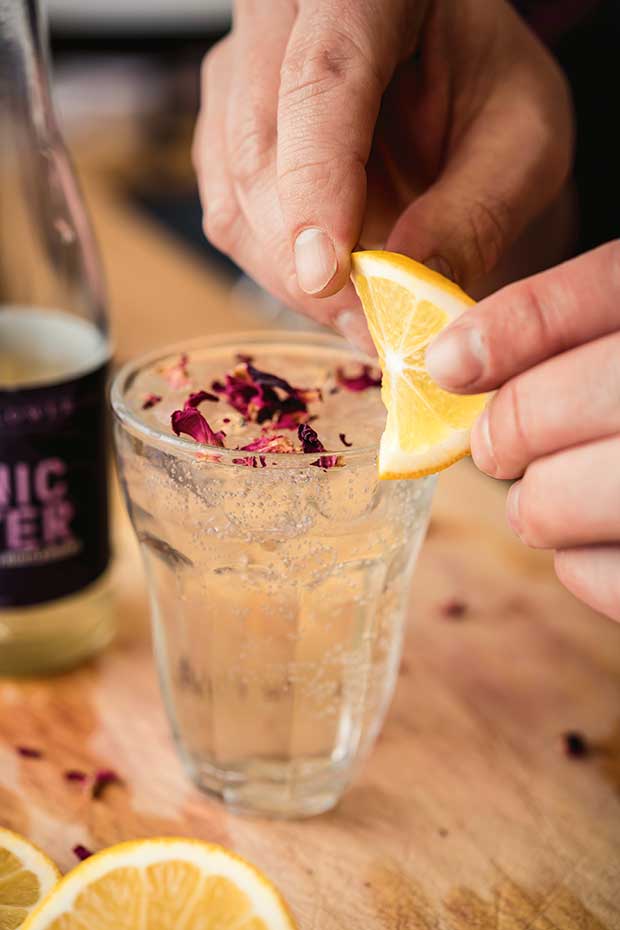 “At this time of year I like to drink Karven dry gin with Bootleggers’ elderflower tonic water, garnished with a dehydrated lemon wheel covered in thyme. To make
a classic G&T, mix one part gin to four parts tonic water (so, 30ml gin to 125ml or a half-bottle of tonic). Serve over ice and garnish with  a wedge of lemon.”

The great gin renaissance has sparked new interest in what was thought of as a drink for old ladies (and gents).