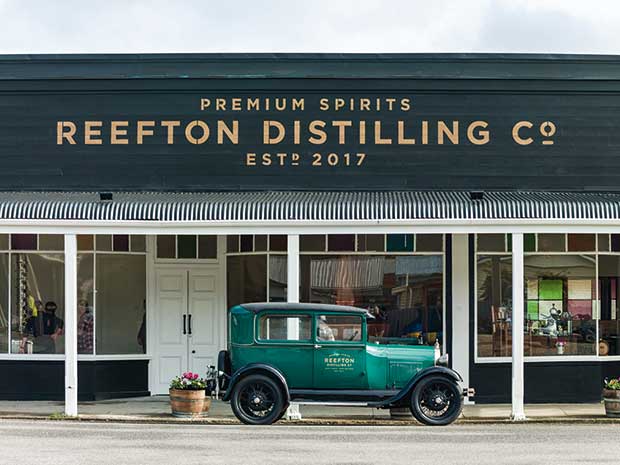 While some brands must cast about desperately for a marketable story or hire people to craft it for them, a tiny West Coast distillery has a glut of tales to tell — and they’re all true. The hard part is deciding which story to tell first.

There’s the story of Patsy Bass, the Reefton girl who grew up on the site of the original Westland Brewery and who always yearned to return.

There are the stories of Bridget “Biddy” Goodwin and George Fairweather Moonlight, two hard shots both lured to the West Coast in the 1860s by gold. Then there are the MacKay twins, “botanical and water prospectors” who know the area like the backs of their identical hands. But perhaps it’s best to start with the gin that draws these threads together. Little Biddy West Coast Botanical Dry Gin, which launched in late 2018, is a true West Coast success story. It combines the region’s plentiful and untainted fresh water with a host of botanicals found high in the hills around Reefton.

These plants — toatoa, tarata, rimu and douglas fir, along with more traditional gin flavours like juniper, cassia and coriander — are extracted through the alchemy of distillation to create a uniquely local drop. It’s like the spirit equivalent of a walk through dense West Coast bush; fresh, pure and a little bit rugged. 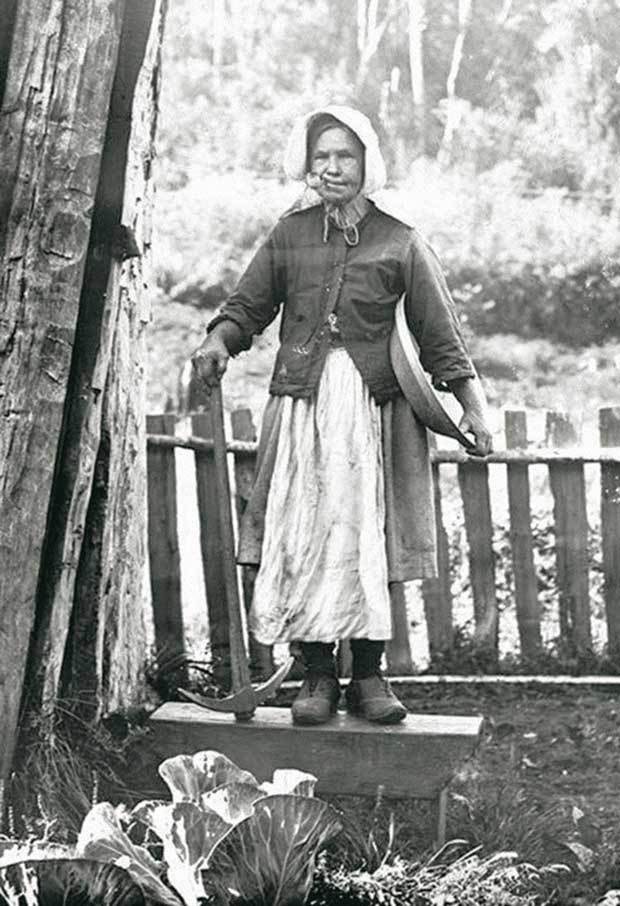 “It captures the rawness of fresh rain in the forest,” distiller Nick Secker says proudly.

Its stablemates — two ultra-premium gins with slightly different botanical profiles and higher alcohol contents, a Wild Rain vodka and a range of seasonal fruit-infused liqueurs — will in time be joined by whisky. It’s an impressive line-up for a business that’s just over two years old, especially considering that its founder rarely drinks.

“I never used to drink,” laughs Reefton Distilling Co managing director Patsy Bass. “I still can’t drink spirits straight, but I do have the odd gin and tonic now.” 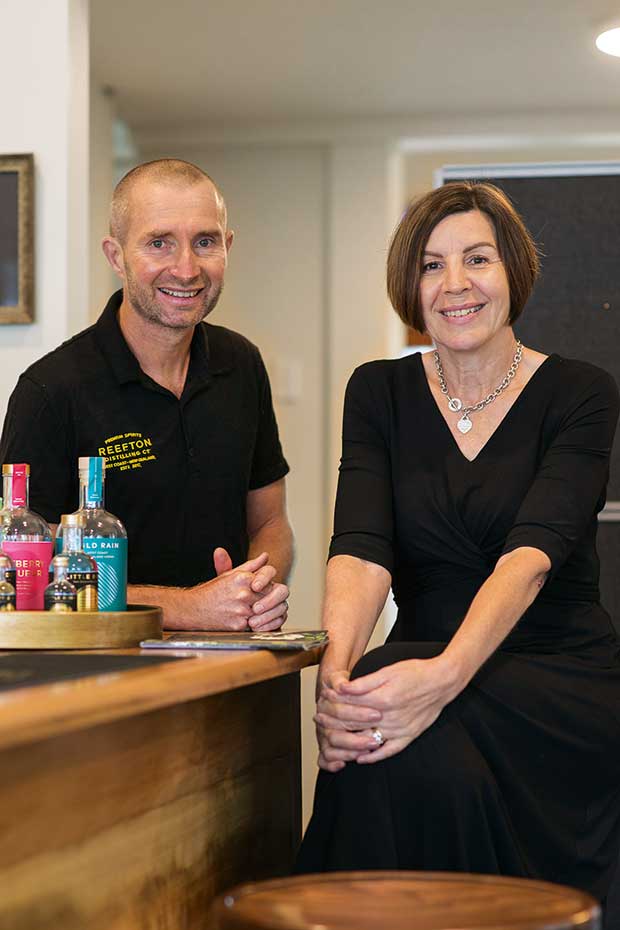 Patsy’s desire to create a distillery was driven by a deep love of her home town. “Even though we left here when I was young and moved to Christchurch, Reefton is in my DNA.”

She and her chef/teacher husband Shane Thrower used to visit Reefton regularly, dreaming of one day being able to live there full time.

Despite being the first town in the southern hemisphere to have mains electricity, the boom and bust nature of mining had seen Reefton’s fortunes dwindle, and Patsy found it hard to watch her old family home fall into disrepair. “Shane and I drove into town a few years ago and noticed our old house had been painted. When we asked who’d done it, someone said, ‘This chap John has moved to town, you need to have a coffee with him.’”

Patsy found a kindred spirit in John Bougen, a property developer who is as passionate as she is about Reefton’s potential. During a three-month contract working for him, she started to think about creating a business that would give the town a boost.

“One of the ideas that flashed past was for a distillery. A few days later I bumped into the MacKay twins, who said they’d previously tried to buy the old BNZ building in town. When I asked them why they were interested in it, they explained that they had Australasia’s biggest private collection of whisky vessels. Suddenly a light went on in my head. It’s been a whirlwind ever since.” 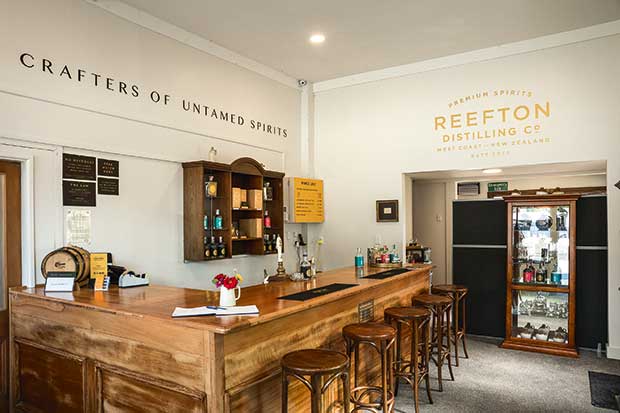 The Reefton Distilling Co, established in April 2017, has so far enjoyed the kind of dream run that all start-ups hope for. A crowdfunding bid raised nearly $1.4 million, John Bougen found them a former general store in which to set up, and the greats of the New Zealand spirits industry offered copious practical advice.

“When the stills arrived, they were all in parts, with no instructions and we had no idea how to put them together,” Patsy says. “We had several distillers who were so generous about helping us. They’d be on FaceTime or Skype saying, ‘now connect these two sections, then call us back’.” 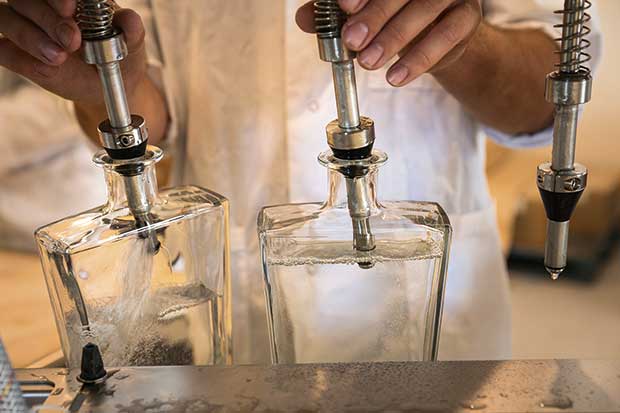 Patsy is also adamant that the story could not have got this far without the input of Nigel and Steffan MacKay. The twins, who have lived their whole lives in Reefton, are embedded in every part of the tale.

When the company was looking for botanicals to use in Little Biddy gin, the MacKays drew on their vast knowledge of the local flora to find the ingredients. They knew where to find the right water sources, cutting their way along forgotten tracks.

“They’re just phenomenal,” Patsy says. “They’re 70, and they’re incredibly fit. They’re in the bush every day, and they know everything about Reefton’s history. They’re absolute characters.” The plants found in the lush native forest around Reefton, not to mention the area’s plentiful rainfall, is the new gold for Reefton Distilling Co and its founder Patsy Bass.

It was the MacKays who helped Patsy uncover the story of pint-sized Bridget “Biddy” Goodwin, after whom the gin is named. “Biddy of the Buller”, as she was known, is thought to have arrived on the West Coast about 1860, escaping an abusive husband in Ireland. She scandalized local society by living with two men while panning for gold at Lyell in the nearby Buller Gorge.

“They did alluvial mining, and she used to rock the cradles,” Patsy says. “She was only about four foot tall, so the water could have been up to her waist. They’d get their money, drink to oblivion and then they’d do it all
over again.” Local legends Nigel (left) and Steffan MacKay (right) are a key ingredient in the distillery’s success.

Biddy later moved to Reefton, where she spent the last years of her life. She was buried in a pauper’s grave in the Reefton cemetery, since marked with a headstone made by the MacKay brothers.

“Biddy had such a tough life, and I feel like I’m on a bit of a personal crusade to make her proud,” Patsy says. “Some locals have told me that they’ve invested with us because of what we’re doing for her.

“We never went into this thinking, ‘there’s money to be made in alcohol’. I just wanted to create jobs in Reefton, and it ended up being a distillery.” 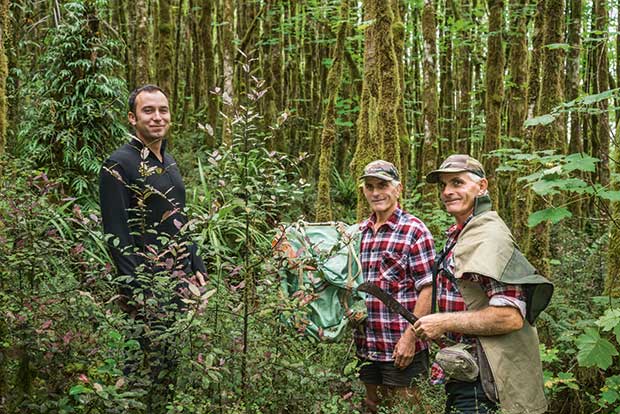 The Moonlight Creek whisky they hope to have ready in a couple of years will pay homage to another West Coast legend, George Fairweather Moonlight. This intrepid prospector discovered the largest gold nugget ever found in New Zealand at the time and lived for the thrill of the chase.

“We want to bring George to life,” Patsy says. “We named our first still after him, and one day when I was out the front doing some planting, a family walked by and pointed in the window. One said, ‘That’s George. He’s come to Reefton to create jobs for people like mum and dad.’ So, we have to make this work, for all of them.” 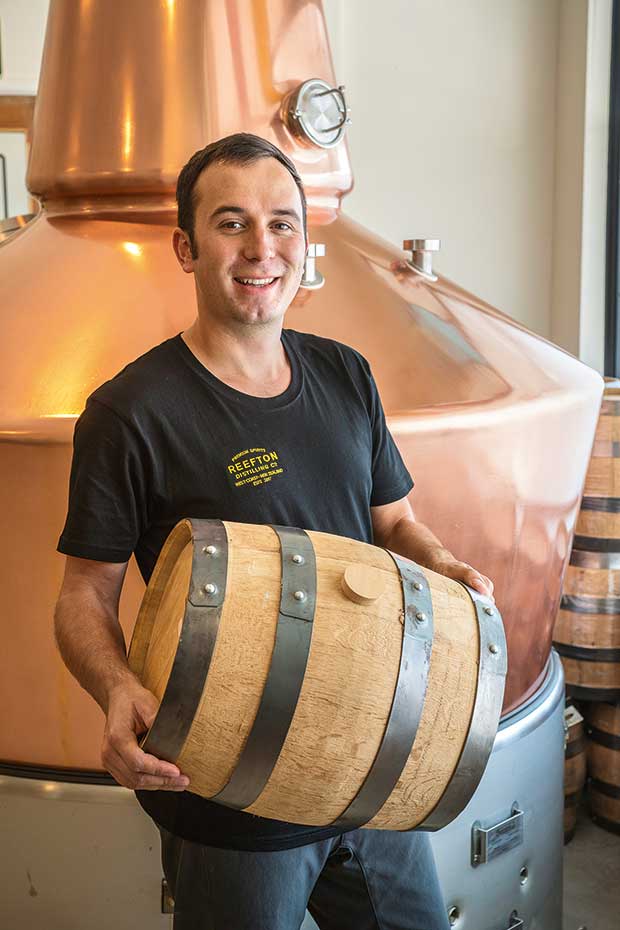 Nick Secker (pictured above), who hails from nearby Blackball, couldn’t believe his luck when the Reefton Distilling Co set up, and cut short an OE in Britain to join the company as its distiller.

After a long, hot day, Nick turns to “the historical treasure that is Monteith’s Original Ale” to quench his thirst. “As well as being a pioneering land for spirits, beer was the first commercialized ethanol on the wild West Coast back in 1868,” he explains.

“Stewart and William Monteith established the Phoenix Brewery in Reefton on the exact same site where our managing director was born and bred. As a former employee of the subsequent brewery in Greymouth, this drop has always been a favourite of mine.

“Perfect at any time of the year; it as equally refreshing as it is hearty with a well-rounded malt profile and subtle notes of hoppy bitterness that balance it perfectly.

“It’s a brew that’s 151 years old, and it’s likely even Little Biddy herself would have enjoyed the odd pint after a hard day out looking for her fortune in gold — but only when she wasn’t toting gin, of course.”