A brief history of the domestic hen 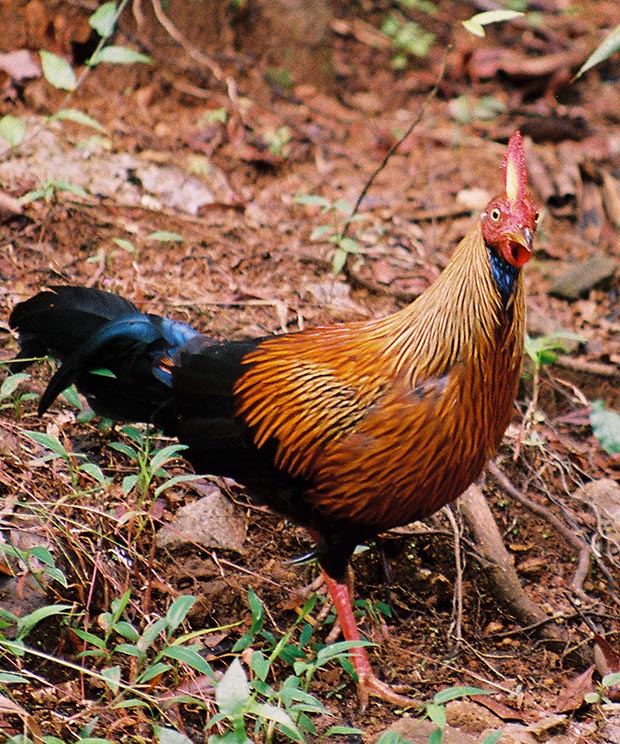 Get a better understanding of your hens by learning about their South East Asian ancestors.

If you could walk through the jungles of South East Asia, among the wild creatures you’d see would be a very familiar-looking bird. It is thought that domesticated hens are descended from several strains of wild jungle fowl, predominantly from Gallus gallus, and the red jungle fowl that can still be found in southern India and China, Indonesia, Malaysia and the Philippines.

The ancestors of the domesticated chicken can be classified into four species: Gallus gallus, Gallus sonneratii, Gallus lafayetti and Gallus varius, and some of these species also have several regional sub-species.

The red jungle fowl is thought to have hybridised naturally with the grey jungle fowl (Gallus sonneratii), a native of India about 8000 years ago. Other species, including Gallus lafayetti – the wild jungle fowl of Sri Lanka – may have had some input into a domesticated hybrid once there was a movement of people and their domesticated poultry between countries. It’s the presence of yellow-legged and yellow-skinned breeds amongst the present domestic birds and the fact that the Red Jungle fowl is white legged and skinned, that points to the grey jungle fowl (which has yellow skin) having a part to play in developing the many strains of domestic fowl we see today.

Recent research has suggested that there may have been multiple origins of a domesticated fowl in areas as distinct as South East Asia, Thailand, Burma, India and also North and South China. The first archaeological evidence of early domestication dates from China as early as 5400BC from various widespread provinces.

Evidence of domesticated chickens appears in the region of the Indus valley in the north-western area of India, later known as Pakistan, in about 2500BC to 2100BC and from here it is believed to have spread into Europe and Africa. Firm evidence of domesticated fowl is found in Egypt showing poultry being used in cock fighting in about 1400BC.

The first pictures of chickens in Europe are found on Corinthian pottery from the 7th century BC. In Ancient Greece chickens were considered a rare and prestigious food delicacy. It is believed chickens arrived in some of the Polynesian islands about 3300 years ago and had spread to Easter Island by the 12th century AD. 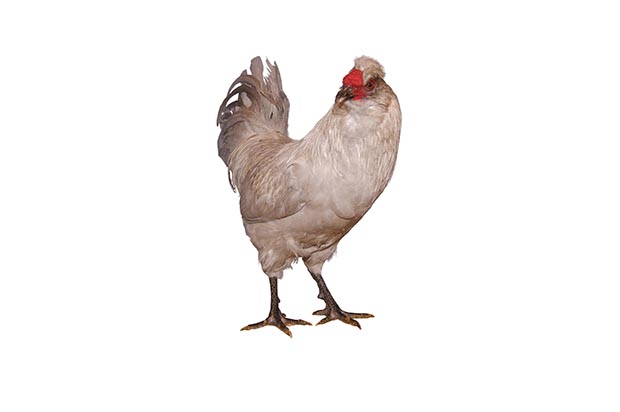 It was always assumed that chickens arrived in the Americas with Columbus and the Spanish conquistadors, but chickens have been identified as being present in several sites in Chile as early as 1350AD. The presence of the blue-egged chicken, now known as the Araucana, found only in Asia and America, suggests an earlier Asian origin of American chickens.

Some of the first references to chickens were as objects of worship and sacrifice, and wild chickens were often relished at Roman banquets, but the oldest writings that reference actual farming of poultry was by the authors Cato (234-149BC) and Varro (116-27BC). Later Columella (4-70AD), who was an important writer on agriculture of the Roman Empire, suggested selecting chickens with white ear lobes as they were more prolific than others and also selecting those with five toes.

This fact corroborates the theory that the Dorking breed was originally bred in Roman times and imported into Britain by Julius Caesar. These early writers of 2000 years ago reported wild chickens as being rare birds and their only use was for consumption as “they were not able to reproduce in captivity”.

They did not imagine that the wild species were the origins of the ones which by 2100 years ago already had several domesticated forms. It was Charles Darwin who convinced the world that domestic chickens had originated from a single specific wild species, although more recent DNA research has proved there to be more than one species involved in the development of today’s breeds of domestic hen.

THE DEVELOPMENT OF POULTRY KEEPING

It wasn’t until after the 16th century that poultry keeping or farming developed into a recognised activity in Europe. It was an exclusive task of the housewives and held in low esteem by the menfolk. Within the share farming system there was a limit of both numbers and species that could be raised by the peasants and controlled by the landowner. The agreement between farmer and peasant was usually to supply cockerels for autumn, capons (a castrated rooster) for Christmas and eggs for Easter.

More stories you might like:
Everything to do in August to keep livestock healthy (hint: get those vaccinations, buy calves)

In the 1800s the interest in poultry raising increased rapidly. Breeds were imported and much crossing and recrossing occurred in a bid to obtain a breed and variety best suited to American farms. But this resulted in the greatest of confusion whenever poultry was judged, so in February 1873 poultry breeders from different parts of the United States and Canada organised the American Poultry Association and standardized the numerous varieties of domestic poultry. 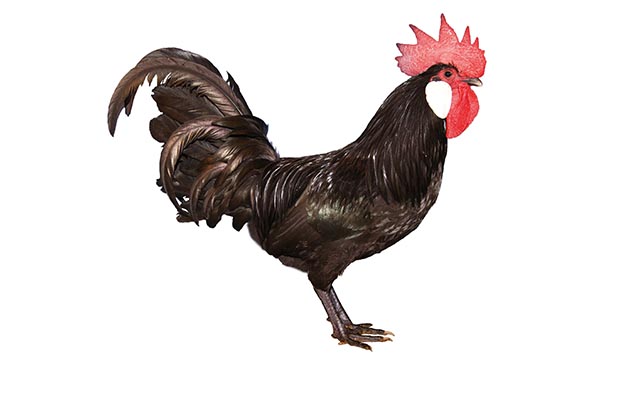 The Poultry Club of Great Britain was founded in 1877 “to safeguard the interests of all pure and traditional breeds of poultry, including chickens, ducks, geese and turkeys.” From this time onwards new breeds were constantly imported into Britain and further developed. The Leghorn originated in Italy, but the white variety arrived from America in around 1870 and the brown Leghorn two years later.

These first Leghorns were quite small, around 1.6kg or the weight of the now popular commercial brown egg laying hybrids. Breeders crossed these small original Leghorns with Minorcas and Malays to increase the size and weights.  After WW2 the commercial breeders established utility strains of Leghorns which now form the basis of many high egg-producing hybrids.

From around 1920-onwards, egg laying trials conducted by government-run organisations in the UK were a feature of the rise in interest in poultry farming and the selection of better performing strains. Several other breeds apart from Leghorns, including Wyandottes, Light Sussex and Rhode Island Reds, were noted for their egg laying abilities and also for being a dual purpose (meat and egg) breed. 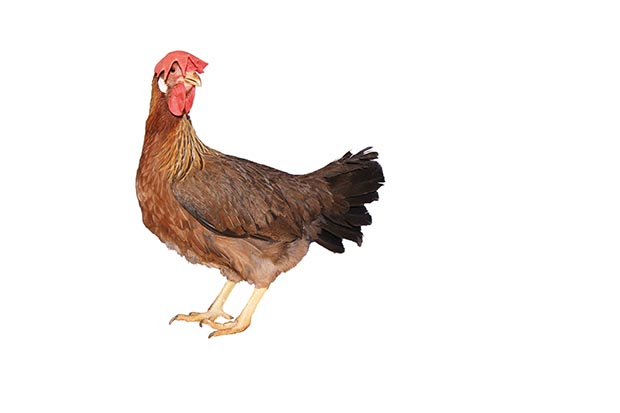 Sadly, today these very high egg-producing purebreeds have been purely selected on looks and their egg laying abilities are far less than they were.

The first hens were brought to New Zealand by Captain Cook on his second voyage in 1773. He gave them to Maori in both the North and South Islands. The first farmed poultry were recorded by the missionaries in the Bay of Islands in 1814 and were primarily farmed for eggs. Poultry meat was a luxury and only from old non-laying hens or roosters up until post World War 2. In 1896 NZ appointed its first government poultry expert and soon after set up several testing stations to evaluate suitable strains for egg production.

In the last 200 years many varieties of poultry have been developed all over the world, many named after the place where they originated. Some breeds also have a ‘bantamised’ or miniature version of the large fowl, while some bantams such as Rosecombs and Sebrights have no large version. The various breeds are categorised into Heavy and Light breeds, hard feather and soft feather, and many colour variations are present within a breed. New colour ways are constantly being developed and standardised.

The biggest development of all from these earliest origins of the fowl has been the selection of the hybrids used in commercial farming, which bear no resemblance whatsoever to their ancestors. Systematic selection for production characteristics such as more eggs and greater growth began as early as the late 1800s, and farming of poultry for their eggs and meat was developed quickly in the early 1900s as the world’s population became more urbanised and the provision of a convenient and economic source of protein became important.

Rapid progress was made in developing breeding and housing systems, and farms where poultry were the sole source of income were developed. Once major problems were largely overcome such as disease control and prevention, and protection from predators and weather by housing birds inside all year round, poultry farming became established as an agricultural industry in its own right.

The knowledge of the precise nutritional requirements of poultry, and the ability to provide a balanced diet to birds housed in commercial sheds has allowed the farming of poultry to develop even further. The domestic hen is the most numerous domesticated creature on earth. It has led to the divergent paths of development of chickens into those kept for purely for hobby and pleasure, and those farmed for their productive characteristics.