Could mushrooms hold the secret to saving bees? 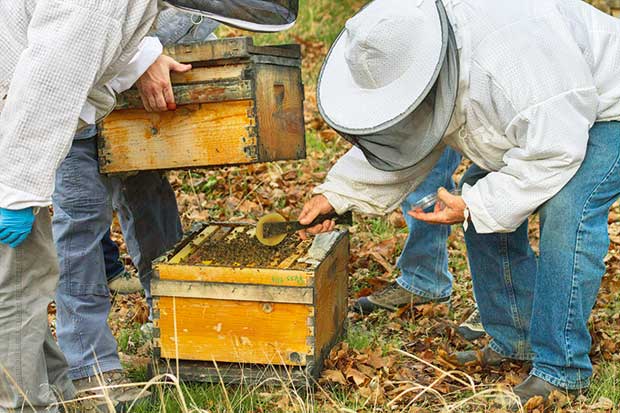 Steve Sheppard and his team placing an edible mushroom extract into a hive as part of their experiment.

A mushroom expert’s observation may help save the world’s bees.

In 1984, US mycologist Paul Stamets noticed bees flying in and out of a pile of wood chips. The bees were sipping liquid oozing from the mycelium of mushrooms growing on the wood.

He assumed the bees were getting a feed of sugar. But a few years ago, he had a big realization: perhaps the bees were self-medicating.

“Our greatest hope is that these extracts have such an impact on viruses that they may help varroa mites become an annoyance for bees, rather than causing huge devastation.”

The mycelium extract isn’t currently available for sale, but Stamets says his company, Fungi Perfecti, is ramping up production so they can provide a commercial product.

Professor Sheppard says he and his colleagues plan to do more work to refine their results.

“We aren’t sure if the mycelium is boosting the bees’ immune system or actually fighting the viruses,” he says.

“We’re working to figure that out, along with testing larger groups of colonies to develop best management practices and determine how much extract should be used and when to have the best impact.”