Does a cup of tea taste better with Jersey cow milk? 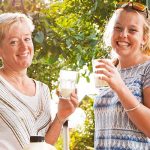 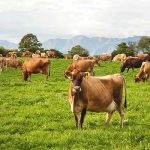 The Vospers farm 250 pedigree jersey cows on 80 hectares. Twenty cows produce the milk for Jersey Girl, these are replaced with 20 more during the winter months ensuring year round supply. 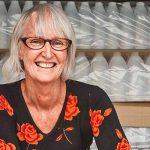 A Waikato farming family takes the cow by the teats and markets its own jersey milk.

They’re a nice family, the Vospers. Anyone in Matamata will tell you that. They might also tell you they’ve been farming here for five generations and while that makes them part of the rural establishment, they’re not like that at all. They’re free-thinking, good-humoured dairy farmers who more than keep up with the times. A while ago they switched to organics and now they’re challenging tradition with a milk-vending machine they’ve installed in the main street of town.

For $2.50 a litre, the townsfolk can fill their bottles with full-cream organic jersey milk straight from the cows that live on the farm up the road. 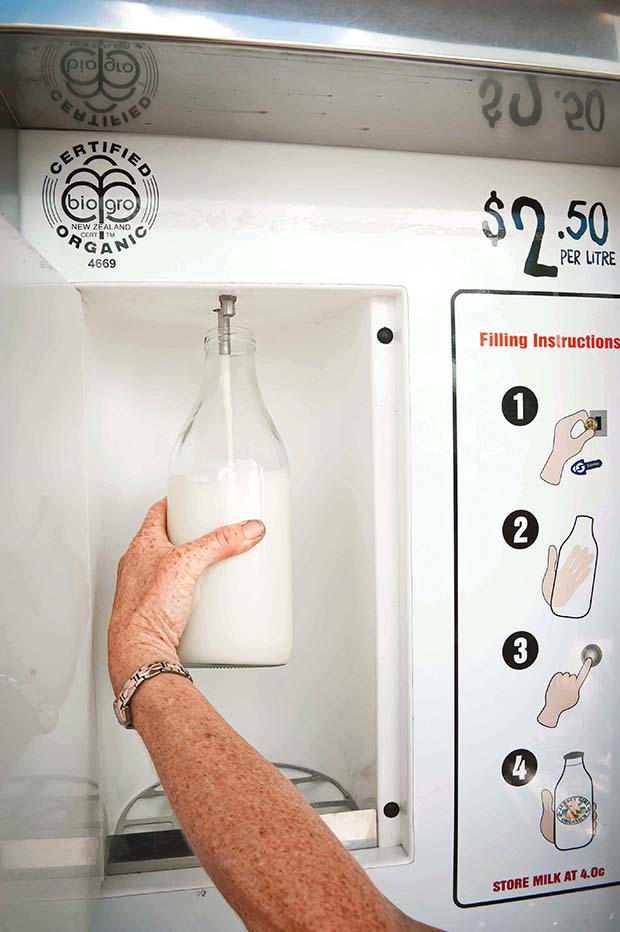 The Jersey Girl milk vending machines are a hit.

The Vospers have two similar machines in Tauranga and a small factory on the farm, where they pasteurize the milk and bottle it for speciality stores, farmers’ markets, cafés, a couple of supermarkets and a baker who swears it makes the best custard squares.

It’s the beginning of a business they hope will give them some independence from the cooperative that takes the bulk of their milk. It’s a timely move – things have rarely been tougher for dairy farmers – but it’s not without risk, which is why it’s stirred up a deal of interest in a region that banks on Fonterra.

The question the farmers are asking is this: does it pay? “We’ve had lots making contact with us,” says Liz, one of the four Vospers at the helm of Jersey Girl Organics. “And we’re honest with them,” adds her son Michael, another. “We hope by two years we may be breaking even.”

John and wife Liz Mackay, Michael, and John’s sister Mary, launched the company at the end of 2014 but the idea took root several months before when John and Liz got talking to a farmer who was selling his A2 pasteurized milk from several vending machines around Nelson. 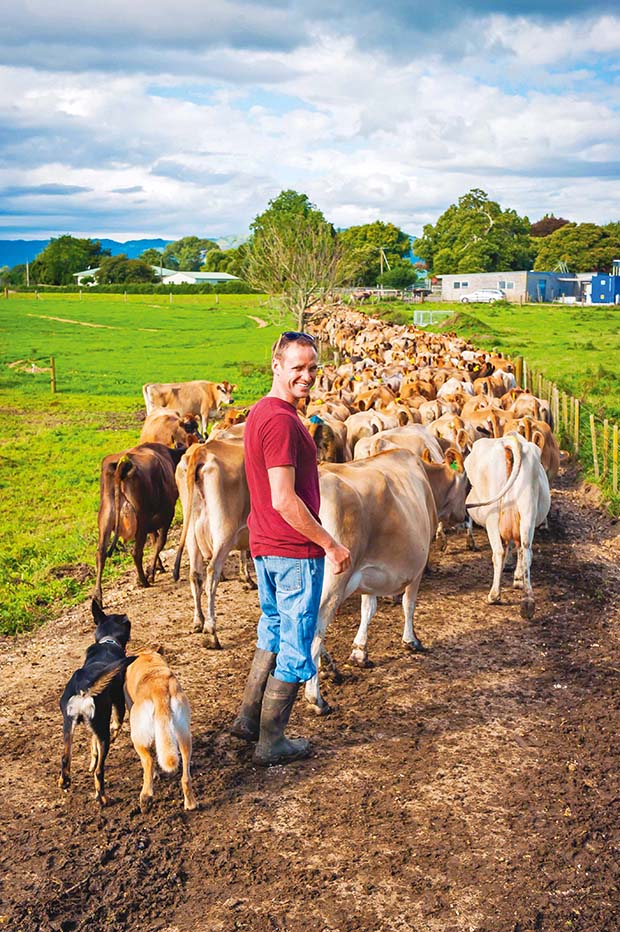 Dogs Rex and Roo help Michael Herd the cows up the raw to the shed.

John had been looking for ways to add value to their own farm business and he figured this was a good fit.

“We thought, ‘Hey! We have jerseys. We have organic milk. We have an opportunity here, and we have provenance with our family history.’”

You couldn’t create a better back story. It was John’s great-grandfather who first introduced Jersey cows to the district back in the early 1900s when the farmers were still milking shorthorns.

Cleave Vosper walked his herd up around the headlands from Taranaki and then across to Matamata where he settled on the
farm that later became a stud, producing sires that helped populate the pastures of Waikato. 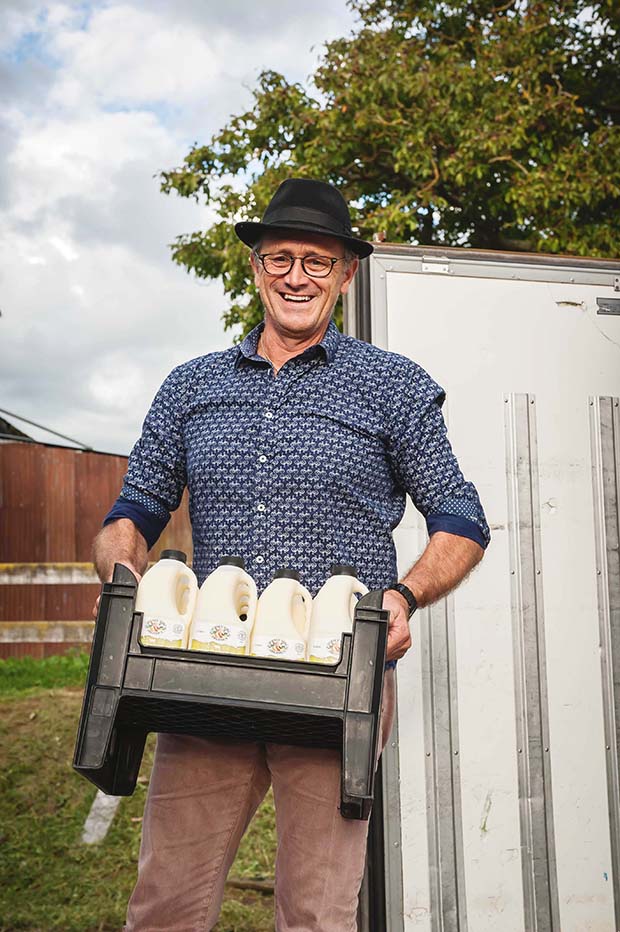 John Vosper and the milk that does him – and the family – proud.

Nowadays, the little brown cow has been largely displaced by the big black-and-white but everyone knows jerseys make the creamiest milk and that is a good point of difference for the Vospers who have the only brand of organic jersey milk in the country.

They are often asked why they don’t sell raw milk. John says the market is small and the health benefits of raw milk are outweighed by the risk of infection. He says it’s simply not worth taking that risk. So the business has invested in a pasteurization plant, which is operated by Mary.

A former biology teacher, Mary is also in charge of sales and she deals with the wads of paperwork required by the regulatory authorities.
Michael, who manages the farm, says he would never have become involved if he’d known how onerous that would be. And he would never have bought the vending machines if he’d realized it would be his job to fix them. 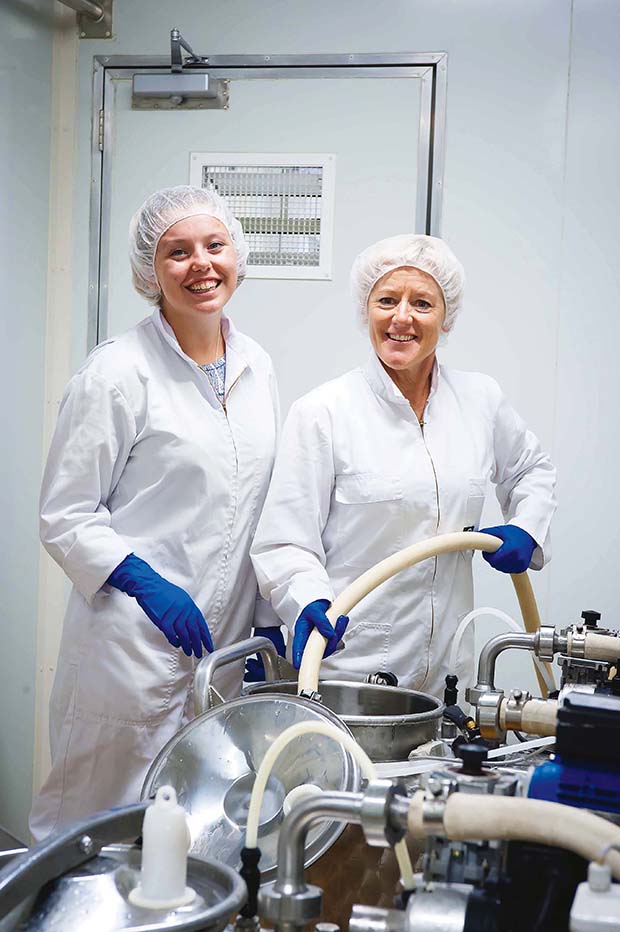 With disarming honesty – and a sense of humour that’s dry as an East Coast summer – he enumerates their malfunctions: over-filling, under-filling, freezing the milk, eating the money.

“What hasn’t gone wrong?” he deadpans. “Well, the fridges are in good condition, and the wheels haven’t fallen off.”

He’s been tempted to dump them but they cost $30,000 each, and besides, says Liz, people love them. That’s true, but while people do like the fill-your-own concept and they like the glass bottles, the machines can’t compete on convenience. It’s the store sales that are really taking off because people really do love the milk.

John and Liz hear this first hand at the markets. “We get little old ladies who buy our milk saying my cup of tea tastes like it’s supposed to. Other people say, ‘I’ve gone back to eating cereal – I hadn’t realized it was the milk.’”
Nostalgia plays a big part. Nowadays milk is routinely homogenized and standardized. It’s taken apart then put back together to a formula that’s consistent. On the face of it, this gives us more choice. We can readily buy blue top, yellow top or green top, even lactose-free milk, but it’s getting harder to find the old-fashioned sort with cream that sits on the top. The Vospers are proud to be supplying that milk – farm fresh and not mucked around with – but it remains to be seen if they will make it pay. You hope they do.

They’re not betting the farm but they are investing in a time of uncertainty and that takes some courage. Currently they’d be better off pumping all their milk into Fonterra’s tanker but who knows what the future will hold?

Owning their own brand gives them some surety and if they can lift the volume it will turn a profit – ensuring the Matamata farm is secured for the next generation of Vospers.