The Twin Coast Cycle Trail snakes through Northland’s often raw backcountry. What better way to learn the contours of the land than by bike?

Once only accessible by boat from across the Hokianga Harbour, Horeke – the country’s second oldest European settlement – is so far off the beaten track even its long legacy of firsts are not well known.

Home to the first pub and New Zealand’s oldest post office, it was also the scene of the country’s first murder trial (and its first execution). The first shipyard operated here and, after just three ships were launched, it saw the inaugural shipyard bankruptcy. 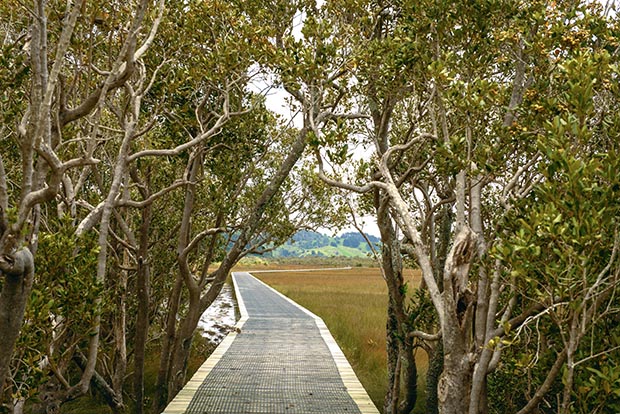 The boardwalk across the tidal marsh near Horeke.

It still has a flourishing tidal marsh, among the country’s finest, which is home to many endangered swamp fowl. And now, flocking back to this historic part of the country,comes a new generation of explorers – most of them wearing Lycra.

The 87-kilometre-long Twin Coast Cycle Trail – Pou Herenga Tai – runs from Opua (on the east coast of Northland near Paihia) to Horeke, cutting through a heartland both beautiful and raw on a network of old rail corridors, walking paths, farm tracks, gravel roads and the longest boardwalk in the country. Long straights and big skies are plentiful but the trail largely wends through ever-changing landscapes that closely touch the nation’s convoluted and sometimes contentious past. For two whole days, I have the trail to myself. Each morning I saddle up in Kaikohe and each night I return to my hotel bed in Paihia. My host, Jonny Martin of Paihia Mountain Bikes, reckons experiencing the ride like this offers the best views at each end of the track and from the right direction.

“Most people take their time enjoying the backcountry and the old towns,” says Jonny. “Others want to ride it in a single day. If they do, I say start in Horeke, because you will usually have the wind at your back.” Yeah, nah. 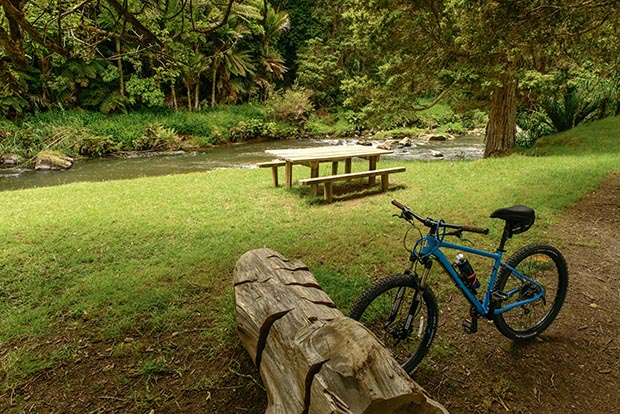 These days it might be hard to imagine Kaikohe as the “hub of the north”, but in the 1950s there were six freight and passenger trains through here per week. While the struggling town shows some vital signs – like the soon-to-be-opened Left Bank boutique hotel in the old BNZ building and the delicious coffee and kai at Café Malaahi – all that remains of the railway is an old platform and information boards.

I am too early to check out the Pioneer Village – a veritable mini-MOTAT with an impressive collection of Victorian buildings, including the oldest courthouse in the country, a steam railway and a miscellany of taonga and pioneering implements and tools. But, trackside at the old dairy factory, I find some living history. 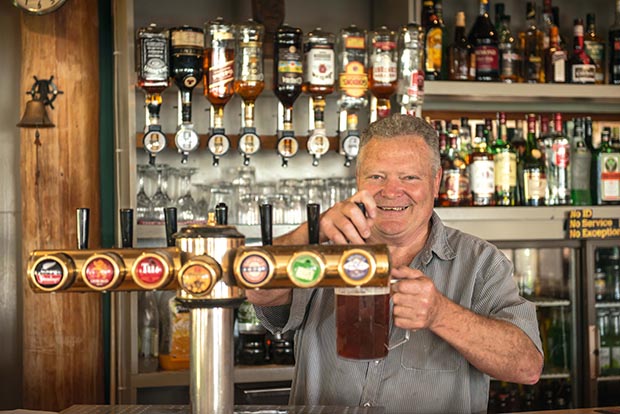 Octogenarian Evelyn Reilly is tilling the soil of a factory-length organic garden with teenage zeal while inside the factory her daughter Jill is busy organizing a charity fashion show from her range of vintage clothes. Jill has renamed this one-stop guest lodging, produce outlet, vintage store and stained glass and metal craft workshop, Tinker Tailor. “Tell cyclists they are welcome to stop in,” says Jill. “They can even make a souvenir of their travels.” 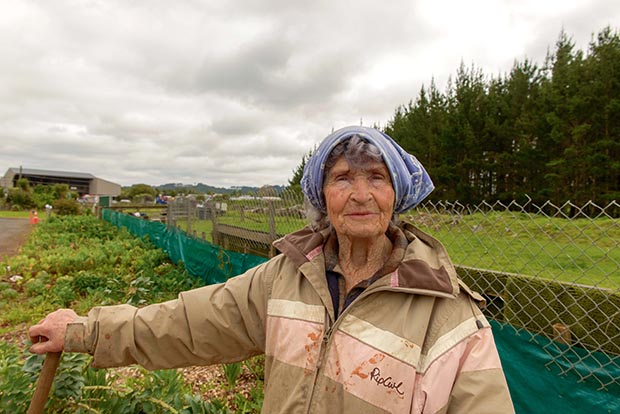 Evelyn Reilly in the garden at the old Kaikohe dairy factory.

I know I am in the heart of Te Tai Tokerau (the northern tide) when I cross a road called Ngāpuhi, named for the nation’s biggest tribe whose traditional homelands are centred here, between the Hokianga and the Bay of Islands. Over the double rail bridge towards Otiria, I meet May and Perry at Te Rito family marae. “Our grandparents Momma and Poppa Ngawati built this for their mokopuna to have a place to come back to,” says May. “We came home from Melbourne.” She points to the red carved gables of the wharenui.

“I grew up here, painted these carvings and knew how the place ran. It is a big change but we knew we were the ones to do it.” The chapel at Mangungu overlooking the Hokianga Harbour.

Near Moerewa at Otiria marae, custodian Muzz is inspecting his newly planted gardens. He invites me onto the grounds and explains the whakairo (the carved symbols) of the meeting house. “Our marae represents the ancestors of the five tribes of Te Tai Tokerau. The central figure is our ancestor Rāhiri.

In the north we say, ‘If Rāhiri is not in your genealogy then you are either a horse or a gumboot,’ which means you probably arrived from elsewhere on horseback or by foot.” A powhiri led by guide Dawn.

Next stop Kawakawa, the only town in the country with train tracks bisecting its main drag. The Bay of Islands Vintage Railway has been making good use of those lines since 1984 with four classic locomotives and a flagship steam engine, Gabriel.

From here, the cycle way, which is on the rail corridor, meanders to Opua Estuary allowing weary peddlers on weekends and public holidays to grab a ride in the cycle carriage – at least as far as the Taumarere Bridge. The prow of Ngātokimatawhaorua, the world’s largest war canoe.

I cannot resist a photo stop at the Hundertwasser public toilets in Kawakawa. Not only are they a quirky place to answer the call of nature, they represent the artist’s only public work in the southern hemisphere. Nearby, an espresso and some gluten-free trail sustenance call me to Elaine’s café. Crossing the highway, I make great time chasing the receding tide and shifting light along the brooding wetlands of the Kawakawa River.

“I hope you don’t run into a bull in the tunnel,” laughs Jonny as I set out on day two. A pair of European cyclists were confronted by an unmoving bull in the 80-metre rail tunnel between Kaikohe and Lake Omāpere leaving them shaken. “They rang me and were pretty scared. We had to call up the farmer to get him to move it.” At the top of the climb out of Kaikohe, I forego testing my bike skills on the off-trail challenges, relaxing instead into some open country, seldom seen from the road. There are no bovine obstacles to Lake Omāpere, just a dairy herd conveniently buffeting the westerly. Across the lake, the distinctive tree line on the shoulder of the volcano known as Te Ahuahu marks the pa of Hōne Heke.

There are various stories on how Okaihau (the feast of winds) got its name. One has to do with the yarn about retired fire chief Colin Thomas who saved a horse from a sticky bog with just two bottles of beer. He tipped one bottle down the horse’s throat which caused it to “thunderously break wind and erupt out of the bog”. The other beer was a celebratory tipple for himself. 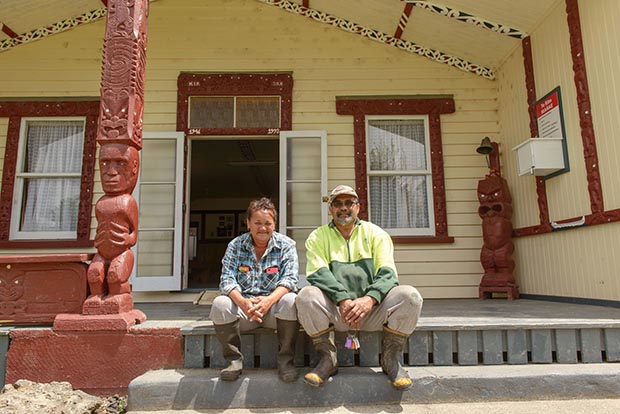 May and Perry outside the meeting house at Te Rito family marae.

At Okaihau Railstay, Noeline Inverarity is rescuing stock of another kind. Inspired by the fact that the cycle trail follows some of the defunct Rangiahua line, Noeline has been refurbishing old rail carriages for accommodation. She has even built a replica of Okaihau Station for a service block. “Most cyclists are surprised by the quiet, the history and the beauty up here. I guess we take that for granted.” 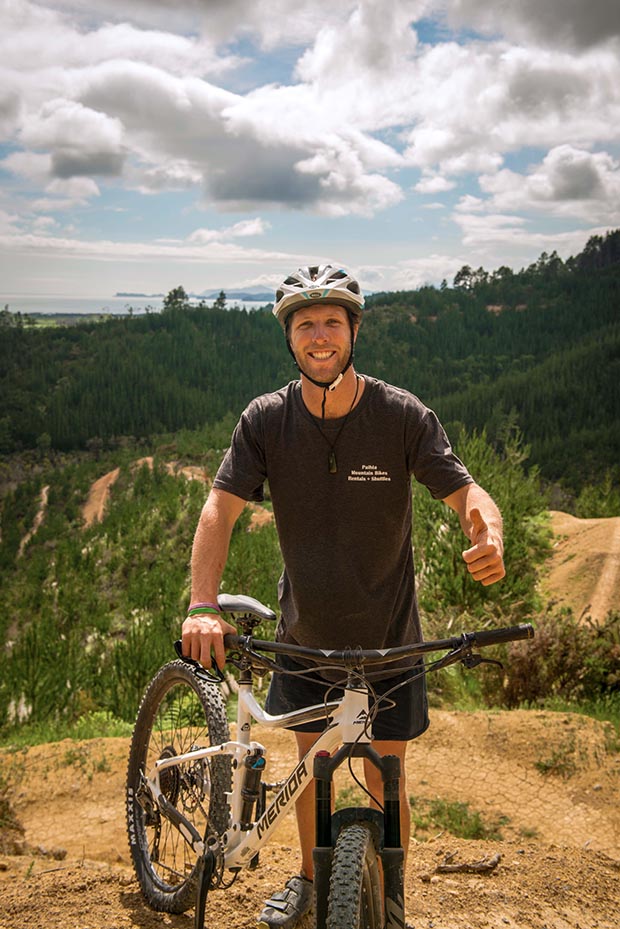 A steep switchback drops the trail into the bucolic valley that is Snow Harrison’s farm and the riding gets a little more technical as it dips and dives through open fields and timber glades alongside the snaking Utakura River.

Snow has been an advocate for the trail since its inception and purpose-built facilities for cyclists, including a groomed riverfront picnic spot. It is an idyllic place to rest, but I can smell the brine of the Hokianga and a coldie calling me on. 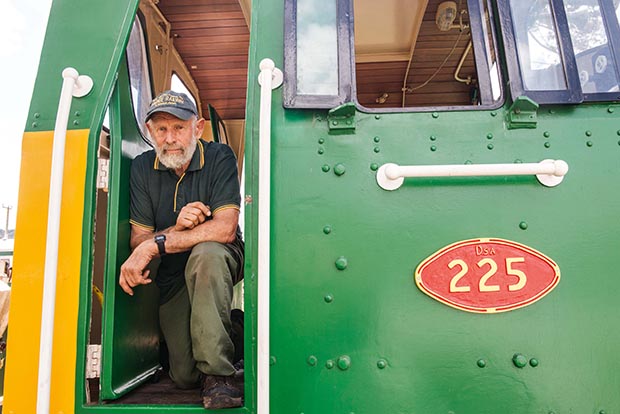 While many finish their ride at the Horeke Tavern, the official trail head is three clicks on, at the gloriously sited Mangungu Mission House, high above the harbour. The mission hosted the largest turnout of chiefs, who gathered here on 12 February 1840 for the third Treaty of Waitangi signing.

Back at the tavern, publican Pete Maddren is a talking history book. He hands me a print of an Augustus Earle painting of the “Deptford Dockyard”, aka Horeke, from the 1820s.

“It was the first commercial shipyard in the country,” says Pete “and this was the first official pub. Our gardens were part of the dockyard. A recent archeological dig found ships’ nails out the back.”

NOTEBOOK
How to get there: Allow about three hours to drive from Auckland to Paihia. Air New Zealand flies from Auckland to Kerikeri (50 minutes), and a number of shuttle operators offer hotel transfers to Paihia (about 20 minutes away).

Ride on: The family-friendly Twin Coast Cycle Trail can be ridden in sections or in one day. Day riders usually start in Horeke and finish in Opua. Plan an itinerary that suits a personal level of fitness and allows time to enjoy the towns and sights along the way. The trail is still relatively new, with limited accommodation options, so riders often base themselves in Paihia, Horeke or Okaihau and use a bike shuttle company to ferry them to a start point and back from their chosen destination. 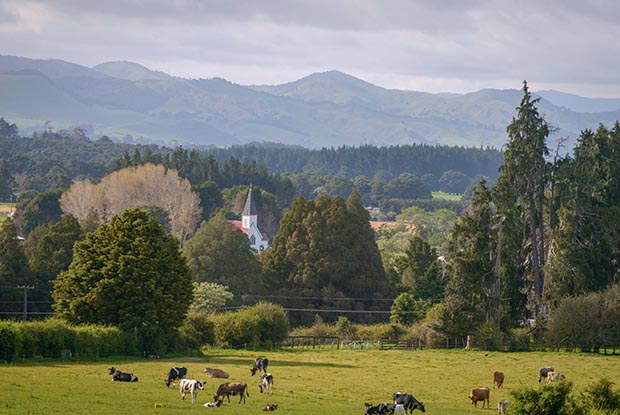 That said, trackside accommodation providers are quickly emerging and beds may soon be found everywhere from marae to old commercial buildings. There are cafés in each town but it pays to carry water and snacks. twincoastcycletrail.kiwi.nz

Bike hire: Paihia Mountain Bikes hires comfortable bikes to suit all shapes, sizes and conditions and offers advice and transport to and from the Twin Coast and the world-class Waitangi Mountain Bike Park. Bike and transport packages start at $59 for a “Taste of the Trail” to $220 for the full two-day experience. Electric bikes can be arranged on request. paihiamountainbikes.co.nz

Stay: The Scenic Hotel is a 10-minute walk from Paihia wharf and within 100 metres of the beach. The tropical gardens and quiet location make for a relaxed stay and the breakfast buffet is a great start for a day in the saddle. scenichotelgroup.co.nz

Where to eat: In Russell, do not miss the Duke of Marlborough shorefront restaurant. The Duke has its own fishing quota so fresh kaimoana is its speciality. Perfectly positioned to catch the sunset, it is just a hop from the ferry. (theduke.co.nz) Making the most of its location on the Paihia wharf is Charlotte’s Kitchen.

Great for breakfast, lunch or dinner, this place is as popular with locals as it is with tourists, so it pays to book. charlotteskitchen.co.nz