From a crop of potatoes to a booming enterprise 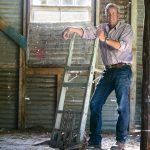 Murray McPhail in his first packhouse where hard work and youthful exuberance set the groundwork for an exceptional farming career. 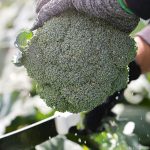 Crops such as lettuce, kale and broccoli that grow year round have helped the McPhails build a stable and motivated workforce in an industry that traditionally runs on seasonal labour. 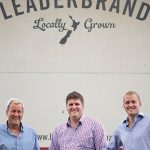 Never one to build “life’s monuments”, Murray says he’s nevertheless lucky and proud that his sons Richard and Gordon have wanted to build on his dream. 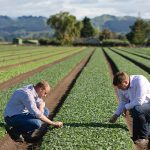 Murray: The pursuit of excellence is what drives me, to the point where it becomes a bit of an obsession. People say to me don’t sweat the small stuff, and I say: No. It’s the small stuff that’s important. If you give up on the small stuff, then how small is small? 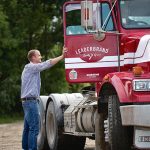 Gordon chats with driver Bruce Dever who has been with the company for 29 years, making him LeaderBrand’s longest-serving employee. 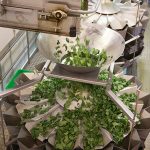 The fertile alluvial soils of the Poverty Bay Flats combined with high sunshine hours and plenty of water make Gisborne one of the best growing regions in the country. 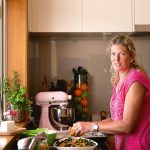 The table on the terrace is the focus of both family get-togethers and business lunches. Lyn caters for the latter, often at short notice. “Murray is very spontaneous. Often he’ll turn up for lunch with 15 people. In the past it didn’t go down so well but I’m used to it now.” In turn, Murray says he couldn’t have succeeded without Lyn’s dedication to home and family. 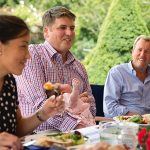 Richard and his wife Tez with their daughter Chloe, the youngest McPhail. 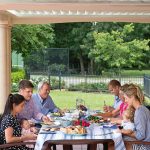 Three generations gather for lunch on the terrace at Ashwood, the home built by Murray and Lyn 20 years ago. The property takes its name from a magnificent stand of ash trees planted by Captain William Tucker, a local identity.

Starting with a single crop of potatoes, a Gisborne farmer has created one of New Zealand’s largest and most innovative horticultural businesses.

It’s been years since Murray McPhail set foot inside his father’s old shed in Gisborne’s Waingake Valley, and he admits it’s looking neglected. There’s an old tractor, a few hay bales, a cattle stick poking out of the wall and a carpet of bird droppings that turns to dust under the tread of his stockman’s boots.

Forty years ago it looked nothing like this.Back then it operated as a pack house for potatoes, his first commercial crop. Look closely and you can still see the evidence. He points to a hole in the wall, now patched, where the potatoes were dropped in via a chute and rolled along to the grader.

More stories you might like:
How organic farmer Bev Trowbridge super-sized her soil with micro-organisms & mycorrhizal fungi

Pacing out the boards, he stops at the place where the potatoes were loaded into bags. “We’d sew them up with a sack needle. You’d stick the needle into your leg every now and again if you weren’t looking. But really we had a lot of fun; how many bags could you sew and how many press-ups could you do in an hour.”

He finds the sack trolley that made do for a forklift and there on a shelf in the corner is a dusty old phone. He lifts the receiver to check for a dial tone but the phone that was once used to call up truckloads of potatoes is now dead and covered in cobwebs.

“I should probably salvage it,” he says getting to work on the screws that fix it to the wall. “I remember when the guy came to connect it. He said, what sort of phone do you want? Well, everyone had a black phone back then so I said, give me a red one.” Such contrary thinking has served Murray McPhail well over the years. Today his crops cover nearly 15 per cent of the Poverty Bay Flats plus another 1000 hectares or so in Canterbury and Pukekohe. LeaderBrand, the business he now runs with his sons Gordon and Richard, employs up to 600 people peak season; it’s the largest grower/supplier of broccoli, sweetcorn and lettuce in the country and a leading grower, packer and exporter of squash worldwide.

The potatoes, however, are history. Murray says they proved uneconomic, as did his crop of organic tomatoes. He puts those failures down to experience – “experience being another word we use for our mistakes” – and, while continuing to review the portfolio, he now spreads the risk across a wide range of crops that provide a long harvest season.

In doing so, he’s rolled out a patchwork of salad greens, kale, broccoli, watermelon, squash, capsicums, tomatoes and beetroot across land that was primarily known for oranges, sweetcorn and grapes. It is an unapologetically intensive cropping business, heavily invested in post-harvest cooling technology and systems that deliver garden-fresh vegetables and pre-bagged convenience products to supermarket shoppers who don’t have time to wash the dirt off their spinach.
Murray says he never imagined his business would get quite this big but right from the start he knew where he was headed.

“My mother would say I was always fascinated by the mechanical aspect of agriculture. When I was young I didn’t want to hear a bedtime story about Rupert or the three bears. I wanted her to read the farming paper with the picture of a bulldozer on the back.”
He got his start much earlier than he would have wanted. He was only 18 when his father died and just 21 when he had to make the decision to buy the family business – a sheep and cattle farm with 40-odd hectares of flat land on which he grew his potatoes.

Such circumstances made a formal education impossible but he took the time to travel and work on farms in North America, an experience that proved pivotal. He was driven there by an interest in feedlots, but he quickly dismissed that idea and turned his attention to the innovations that were taking place in horticulture.

“There was this huge emphasis on technology and investment in terms of new varieties and mechanical harvesting. It was hugely exciting and way ahead of what we were doing here.”
He returned with a head full of ideas and in 1975 launched LeaderBrand. He says people often ask if he had a grand plan. He didn’t. He still doesn’t. But he says he was always thinking of ways to improve and expand his business, and he remains a great believer in the power of prediction – especially when it comes to consumer trends.

“What are people going to want to eat in the future? Where is the consumer going to be – because you’ve got to be there, not now but in the future. It’s about how you position yourself and how you think ahead.”

It’s also about how you get over the hurdles. Murray’s wife Lyn says people see the trappings of their success but have no idea of the effort it’s taken to achieve them.

She remembers being the sole office person, taking orders and managing the cash flow with baby Caroline asleep under her desk. There were crop failures, plant closures and times when prices moved against them, but most of all she remembers the catastrophic event no one could have predicted.
In 1988 Cyclone Bola ripped the heart out of Gisborne. Wild winds and torrential rains savaged the district for three days, destroying homes and farmland and flooding the Poverty Bay Flats.

“We were trapped in the house; cut off with no phone or electricity. The crop losses were terrible. Murray was interviewed for Country Calendar with his capsicums, washed up 30 miles south on Mahia beach.”
“Everything was gone, everything,” recalls Murray.

He says some farmers lost heart and upped and left, but with the help of a sympathetic bank manager and the government’s compensation package he scraped through, re-planted and rebuilt.
Undoubtedly the business will suffer more ups and downs but its success is now in the hands of the next generation. Daughters Caroline and Sophie have followed careers of their own (Caroline works for
New Zealand Merino and Sophie is a radiographer) but Gordon and Richard bought in four years ago, a move they say seemed like the natural thing to do.

“We grew up working in and around the business,” says Richard. Summer jobs in the fields and riding shotgun with the managers connected them with the workforce and prepared them to take on what they know is a great opportunity.
Do they feel the pressure? “Definitely,” says Gordon, “but that’s what drives us. We want to build off the business we’ve been left but certainly leave behind our own legacy.” With that in mind they have embarked on a programme to refresh the brand and increase the lucrative salad business. They are also introducing a more youthful culture to the workplace, building on the family values instilled by their father.
If that sounds like Murray has been put out to pasture, think again. Retirement? He’d go nuts. He is currently in charge of special projects a job description that amuses him because it implies his sons aren’t quite sure what to do with him. But in fact he is being most useful. The pre-cooked vacuum-packed beetroot you see in the supermarkets is one of his projects (currently selling 15,000 packs a week) and he’s also overseeing the building of a 130-metre in-line salad processing facility.
Otherwise he’s hands-off. He and Lyn spend half the year travelling and when they return he resists the urge to step in. Some might say he’s handing over the responsibility too soon but he naturally takes the alternative view.

“If you look at any vibrant industry, it’s full of young people. Young people can and will do dumb things. They don’t see the dangers so they take risks. But every now and then it really works.” Garden gate to dinner plate: “The most significant change in my time has been the consumer environment,” says Murray. “Consumers want convenience.” This drives the company’s pivotal relationship with supermarkets and its growing range of convenience products: salads, slaws and stir-fry vegetables packed with ready-mixed sachets of dressing. Pouched products are a more recent addition. Using technology that is more commonly used overseas, sweetcorn and beetroot are vacuum packed in pouches and cooked so they are ready to eat and shelf stable with no additives.