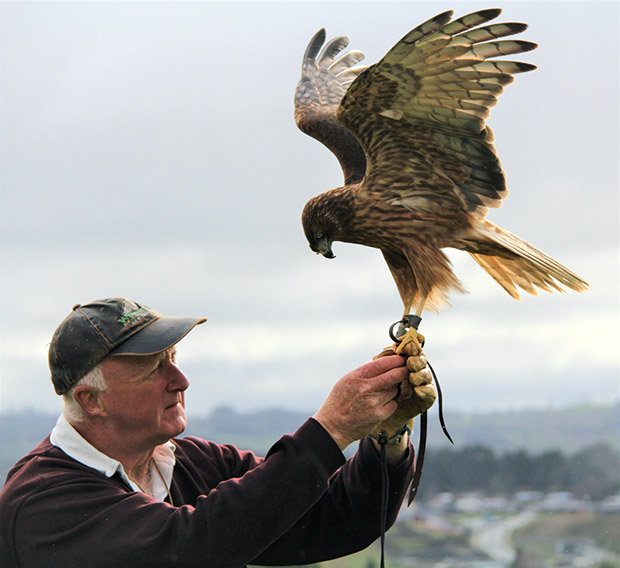 Noel Hyde believes that dark, yellow-rimmed eyes can lead to extraordinary things. It happens most often when he, surrounded by curious spectators, releases a kārearea (new zealand falcon) into the sky.

“There’s something about looking a falcon in the eye that can change people,” says the Rotorua falconer. “Birds of prey are often persecuted because they are predators. Flying demonstrations can lead to sympathy, which ultimately leads to protection.”

Noel, a trustee for the Wingspan Bird of Prey Centre, is used to looking birds of prey in the eye. Most days, he trains and feeds native raptors such as kārearea, ruru (morepork owls) and barn owls for the Rotorua charitable trust; other days he may be crouching beneath a nest flittering with baby barn owls.

Winged predators have always enraptured Noel. His passion began at the Dominion Museum (now Te Papa) where he worked as a scientific bird taxidermist for 27 years. As a young man, he became certified to handle hawks for rehabilitation, eventually learning to heal and train the significantly more vulnerable kārearea.

His pastime took centre stage when he moved to Rotorua to join his partner (and Wingspan founder), Debbie Stewart. There, the couple worked furiously hard to develop the programmes and facilities at the trust, located in Ngongotahā Valley. He hopes their advocacy for native birds of prey will help steer populations away from decline. “Wingspan is all about changing misconceptions about birds of prey.” 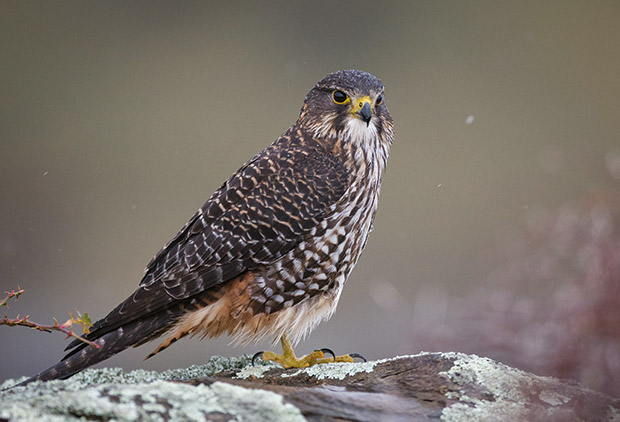 He often comes across surprises as a pioneer in his field. When a mysterious barn owl population appeared in Northland in 2008, Noel trekked north to investigate. “No one seemed interested in this curiosity. I was completely taken by it. So I drove to Northland once or twice a year to learn as much as possible about the birds.”

More stories you might like:
The Vinbrux family in lockdown: Alert 3 and 4 are easy peasy for New Zealand's most self-sufficient family

When a friend called him about an injured female owl in Northland, Noel was quick to transfer her to Wingspan for rehabilitation. “Ten years later, we found a male with a dislocated wing on the side of the road. We paired him with the female, and they started breeding.” Fifteen barn owls now reside at Wingspan — the only captive population in New Zealand.

Noel’s hands-on advocacy for birds of prey hasn’t gone unnoticed. In 2018 he was appointed a member of the New Zealand Order of Merit for services to research taxidermy and wildlife conservation.

Even after the honour of a lifetime, Noel still holds his breath when he beckons a kārearea back to his glove. “It’s an incredible feeling to call a bird out of the clouds through such a tenuous connection. I’ve been so lucky to make my life’s interest my life’s work.” 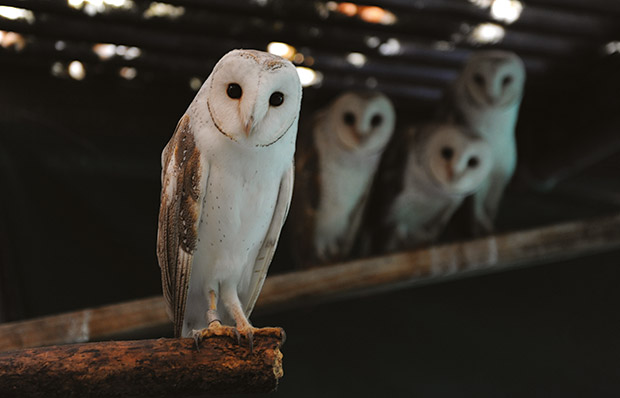 For more than 60 years, barn owls made the odd appearance in New Zealand without establishing a population. However, in 2008, the barn owl was hailed as the newest native species when a breeding pair was discovered in Northland. Now there are several nests, and although the population remains in the North Island, single owls have been spotted as far south as Canterbury. Noel expects the species to expand to southern regions of the country.

There are fewer than 8000 kārearea in New Zealand, but the breed still knows how to make a bold entrance. Kārearea can be aggressive during nesting, and in colder months, juveniles may gravitate towards properties with aviaries or chicken coops. “They can be a nuisance trying to attack other birds,” says Noel. Wingspan estimates more than 200 kārearea are shot annually. “If you are lucky enough to have one in your backyard, lock up your birds for a day or two. But while it’s there, enjoy the moment. It’s a privilege to be in their presence.”

More stories you might like:
Career path: Ballet mistress Clytie Campbell on the life of a dancer