From the United Nations to a back-to-nature apothecary, how grief helped Georgina Langdale find her path Once on the international stage for environmental causes, Georgina Langdale returned home to set up a back-to-nature business that makes a difference, one purposeful potion at a time.

It takes only 112 footsteps – she’s counted – from Georgina Langdale’s house to the Archeus apothecary where white sage and bright blue salvia grow beside the door. Her daily ‘commute’ over, she pauses to savour lingering fragrances such as sandalwood, geranium, frankincense and chamomile.

One of Georgina’s paintings with bold letters spelling out places she’s lived previously – Raukawa and the London suburbs of Pimlico, Bloomsbury and West Kensington – hangs here too. She painted it while living in Germany at a time when she asked herself, “Where is home?” Happily, she no longer has any doubt; the 2.5-ha property near Napier, where she lives with her husband Al Morrison, is truly, madly, deeply her happy place. 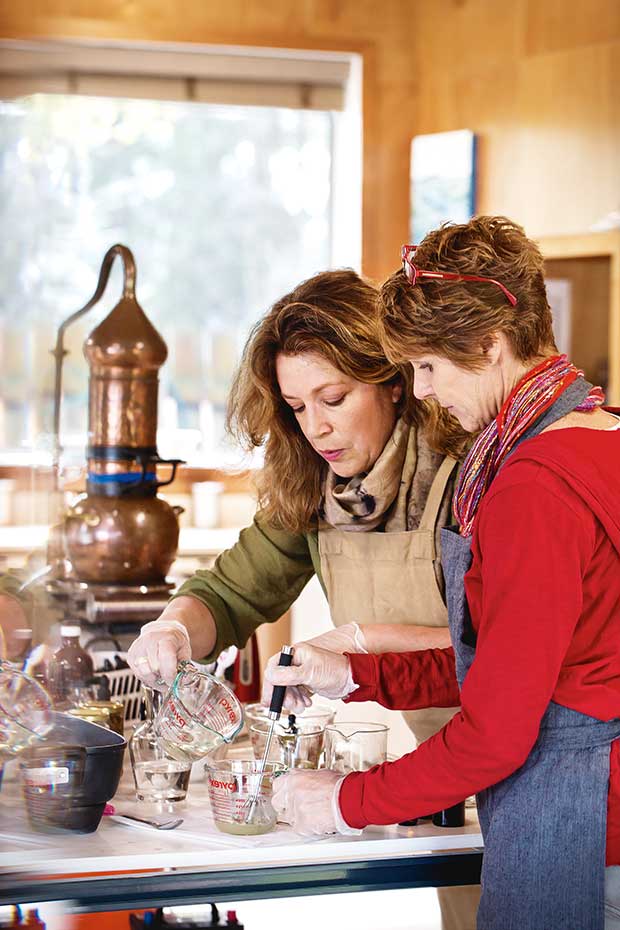 Georgina once commuted on two wheels to work at the United Nations in Bonn. Her preferred route was a nine-kilometre round trip on a cycle path beside the Rhine.

“Being out in the fresh air and looking at such wonderful scenery – there was always something interesting going on along the river – was preferable to sitting on the U-Bahn (underground railway),” she says.

She biked through each season until, in winter, when the snow proved too much, she took the train and waited for the cold to release its grip. 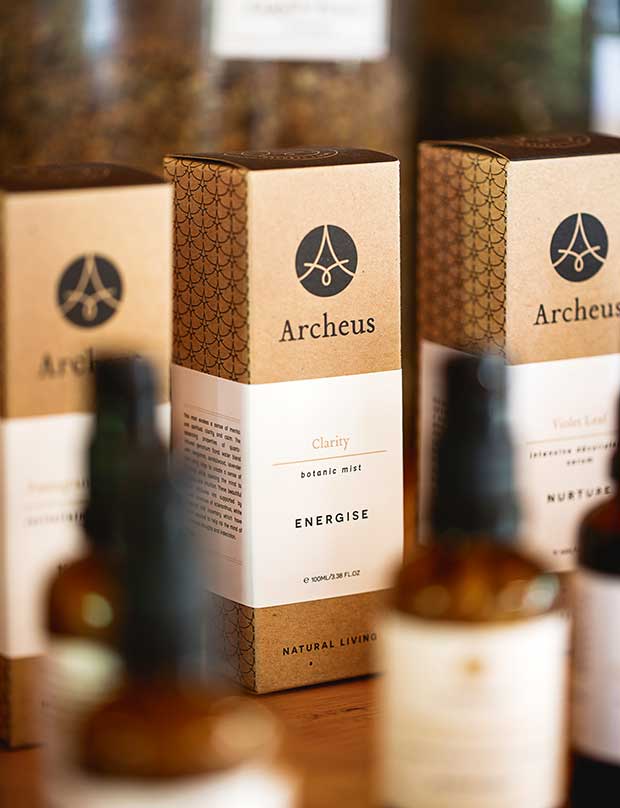 Her job as Global Communications manager for a UN environmental study called TEEB (The Economics of Ecosystems and Biodiversity) meant she traveled frequently to the European Commission in Brussels, and many other countries including Uruguay, to speak at the Global Environment Facility congress, Japan for the Convention on Biological Diversity 10th Conference of the Parties, as well as the United Kingdom and New York.

And although her high-flying career was satisfying, in many ways it felt hollow.

“I felt less and less connected to the natural environment we were working so hard to support; we spent way too much time in suits and going from one meeting to another.” 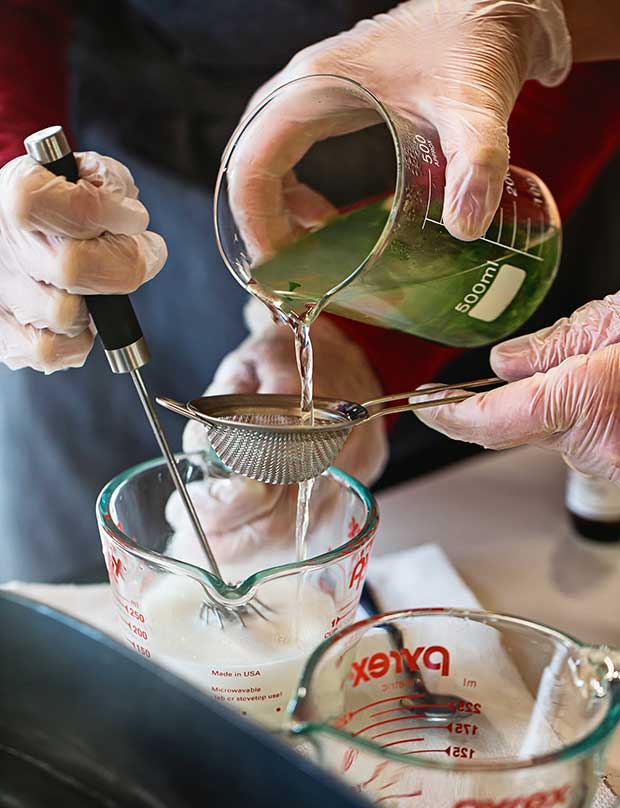 Being able to jump on her bike, as well as growing flowers and vegetables in the rooftop garden of her apartment in central Bonn, helped Georgina feel grounded, but deep down she yearned to do more than just talk about protecting the environment. She wanted to bury her hands in the soil, get dirt under her fingernails and feel the earth beneath her feet.

In her heart there was only one place she could imagine that dream coming true – “the region that nurtured me as a child.” 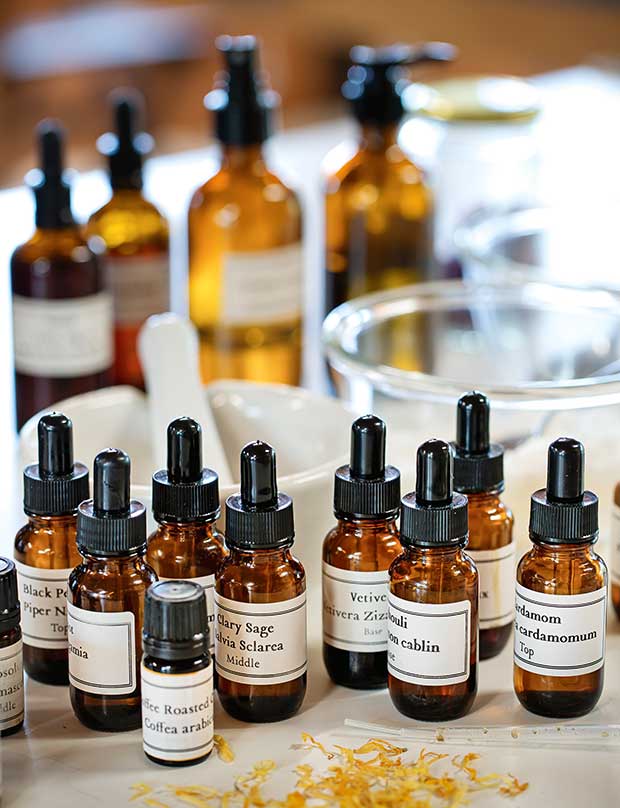 Spurred on by the fact that her parents, Jane and Philip, were unwell, she returned to Hawke’s Bay in 2011 and in 2013 set up a natural skincare business called Archeus (Ah-kee-us). In hindsight, she’d been preparing for this moment for about 20 years.

Alongside her busy career (in London, she ran a cultural communications agency and was corporate engagement manager at the Royal Botanic Gardens, Kew) she’d always managed to make time for studying her private passions – environmental science, massage, reiki and herbal medicine. Al and Georgina enjoy the view of the Ahuriri Estuary, with Napier’s port in the distance.

“When I lived in London I often felt very disconnected from the natural world and I’d have paid anything for a pot of cream that melted into my skin and carried the essence and energy of nature into my soul.”

Around the time Georgina launched Archeus, she made a healing balm for her mother. “Because mum was very ill, her skin became itchy from some of her medications. To help, I used soothing and cooling herbs, including chickweed. The fact that it gave her some relief confirmed I was on the right path.”

Read more on Georgina and grief below

These days, most mornings begin with a walkabout with Puffle the Labradoodle and Nemo the black cat who relocated from Germany with her.

Georgina heads up the steps and past raised beds of towering broad beans (part of Al’s beloved vegetable empire) their fat pods ready to be picked, crunchy lettuces and muscular bouquets of parsley, candy-pink geraniums and drifts of lavender. 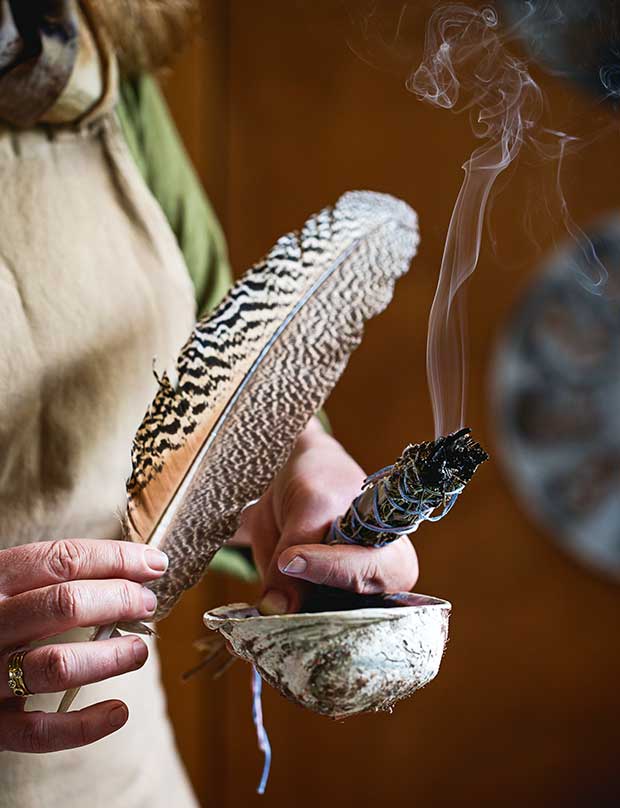 Clockwise from top left: Incense-like smudge sticks are feathered into the air before and after wellness sessions.

Sometimes she follows a curved path lined with camellias, magnolias, maples and weeping cherry; or past hawthorn trees to the pond where the ducks, Flossie, Daisy and Mathilda, live. Spotty Ears and Budge the sheep join in on the morning greeting as well.

With names like these, they can be assured of a long life spent munching on grass beside the pond.

Many of the plants she sees on her morning perambulation are used in her products, including many so-called weeds. “Violets, chickweed, nettle and even cleavers (biddy-bid) are all powerful healers. I love acknowledging their place in the garden and the benefits they bring to the things I make. 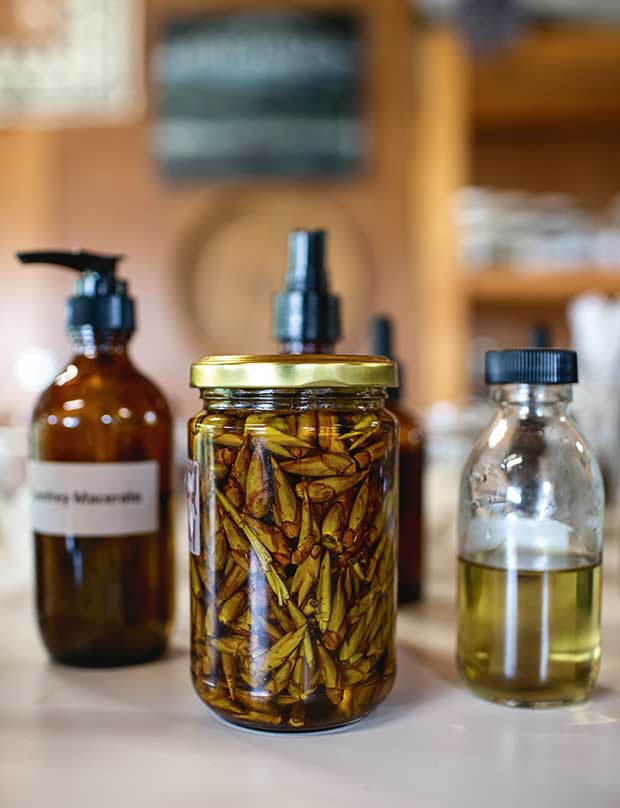 The apothecary is Archeus HQ.

Once you learn about their uses in herbal medicine, it’s hard to think of them as a weed ever again.”

Al, a former director general of the Department of Conservation, is not as fond of weeds as Georgina, but the day he had a nasty fall in the garden a particular weed proved very helpful.

“I was bleeding like a stuck pig and Georgina immediately raced off to pick a handful of yarrow before chewing it up and plastering it on my leg. Within seconds the bleeding stopped.” 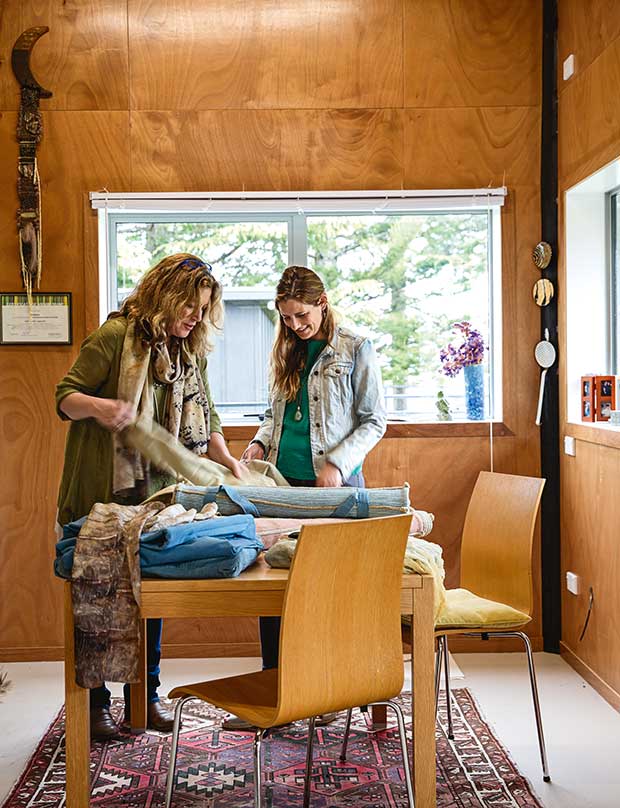 Al and Georgina have known each other professionally since the 1990s. They met in Wellington when he was chief reporter for the Evening Post and she was promoting the NZ International Arts Festival, but it was only when Georgina returned to live here permanently that love blossomed. 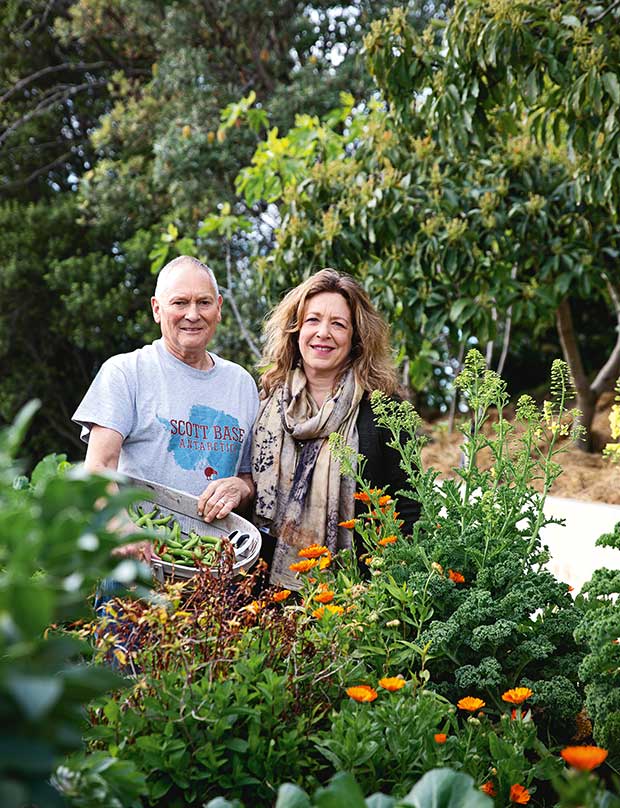 Away from his work as deputy commissioner for the State Services Commission, Al is usually found pottering around the garden. “I get lost here for hours. I love it, especially my veggie plot – there’s nothing nicer than growing your own.

I like the fact that the garden is attached to George’s business, so it has a purpose other than recreation and sheer pleasure.” 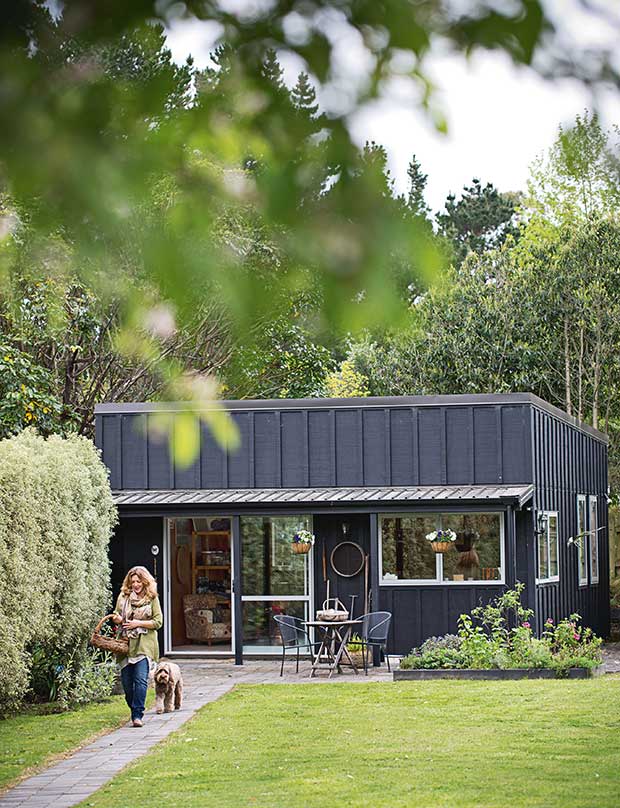 The apothecary in a converted barn is used for consultations and wellness sessions, as well as processing herbs, dyeing textiles and running workshops. “People tell me they see recipes for balms or lotions but don’t have the confidence to do it themselves.

When they walk away with bags filled with what they’ve made, it’s so satisfying,” she says. 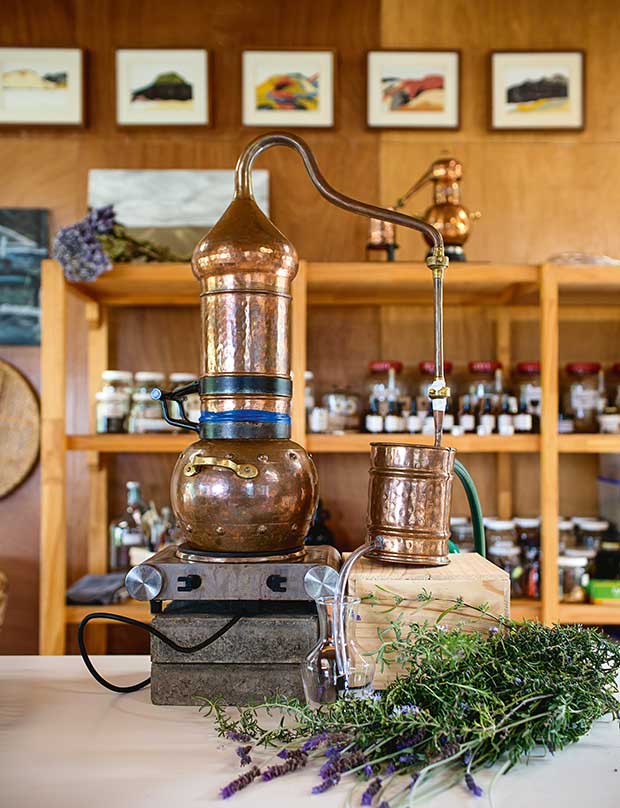 An Alembic copper still is vital to the alchemy.

Georgina loves big projects and is always coming up with new ideas. “When a friend of mine was unwell, I wanted to wrap her in goodness. So I experimented with dyeing natural fibres with medicinal herbs such as gentle lavender and calendula. She told me it was like lying on a bed of herbs.”

More stories you might like:
How serial inventor Coll Bell's wastewater system could revolutionise the dairy industry 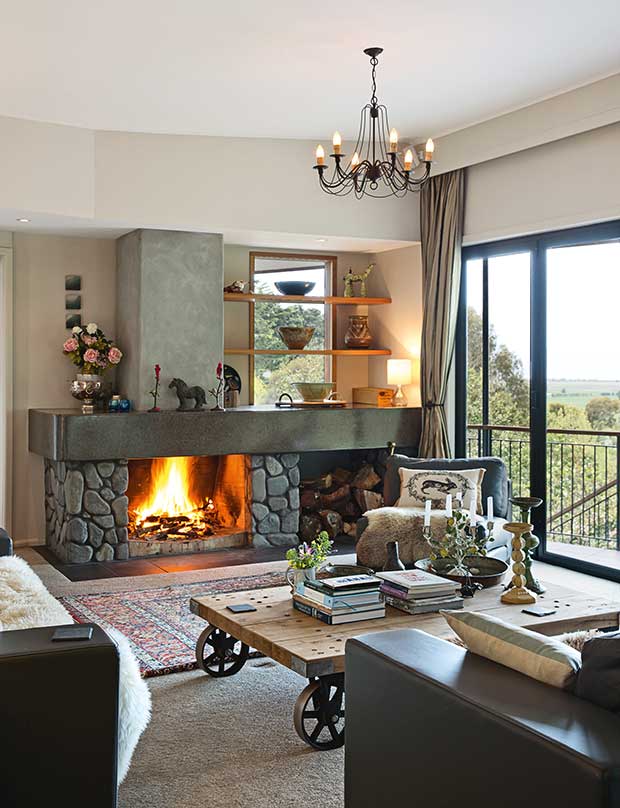 A coffee table on wheels was a “housewarming present to ourselves”.

She’s excited about her latest development –  a range of burial shrouds dyed with blends of traditional Indian and western medicinal herbs.

Although she no longer works in boardrooms or wears a suit, she is influential in a different way. “I run my business on principles I once promoted to others and place nature and our relationship with it at the centre of our decision-making.” 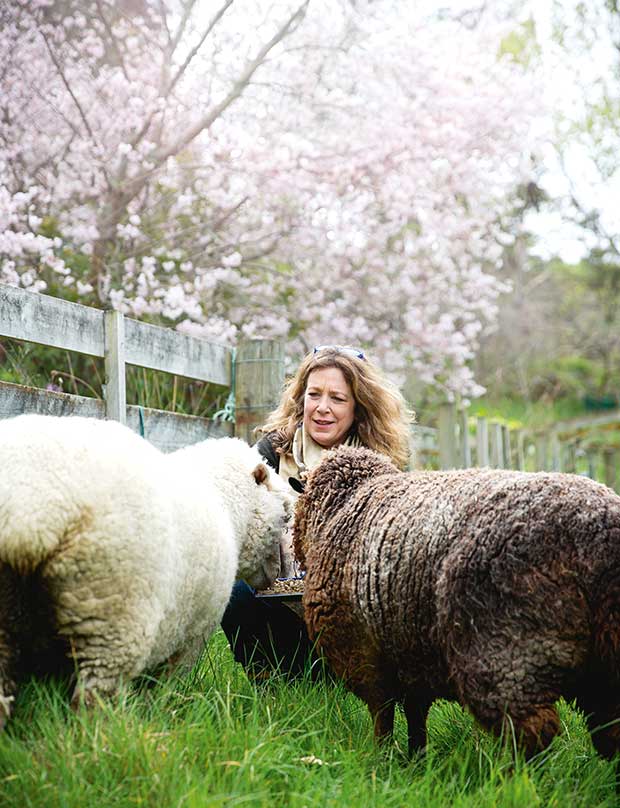 Spotty Ears and Budge are “the two most spoiled sheep in New Zealand”. 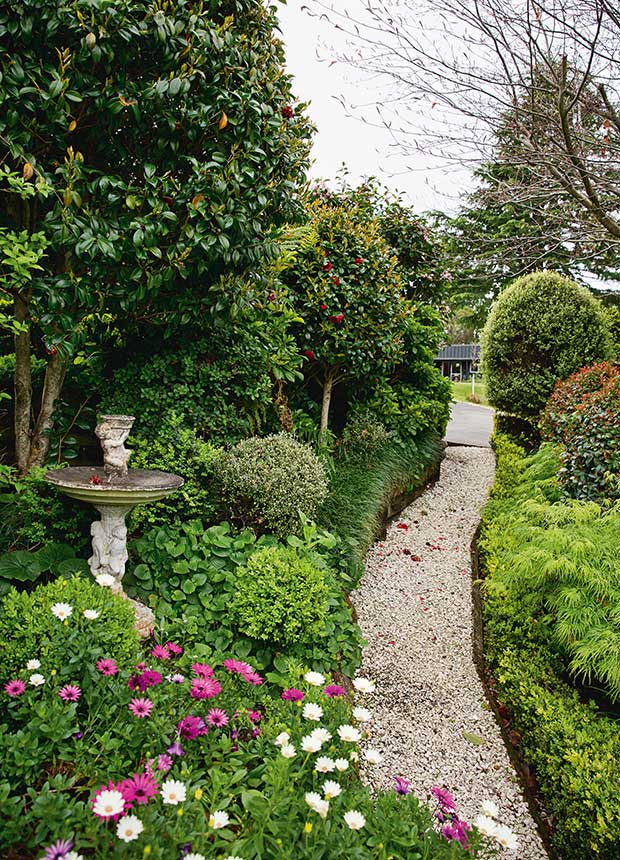 A path lined with camellias and maples leads to the apothecary – “previous owners created a great framework which we are subtly enhancing.” Georgina’s constant companion, Puffle, benefits from Archeus remedies such as Anima Pet Balm. Georgina hand-dyed her scarf with eucalyptus, goldenrod, as well as leaves of walnut, fern and maple.

Georgina’s experiences of helping others deal with ill health, including her mother Jane who passed away in 2014 and caring for her father as his health declines, has required her to pull on every inner resource she can muster. “It’s been incredibly testing but I’ve learned some valuable lessons.

“I’ve observed that people are often uneasy talking about grief or death, but it’s part of the natural cycle of life and feels like a very sacred and valuable part of what I do. When people kept coming and asking if I could help them with grief, and I looked back over my own experiences, I began to focus on what I could create to help with dying in a state of grace.

“I particularly like working in transitional spaces that many others feel uncomfortable with such as menopause, the journey from illness to wellness or from life into death. These transitions have now become the key focus of my business.”

With this in mind, Georgina recently launched a sister company called Archeus Natural Transitions. A percentage of each Archeus sale goes to plant conservation projects in Hawke’s Bay.

A FEW OF GEORGINA’S FAVOURITE THINGS 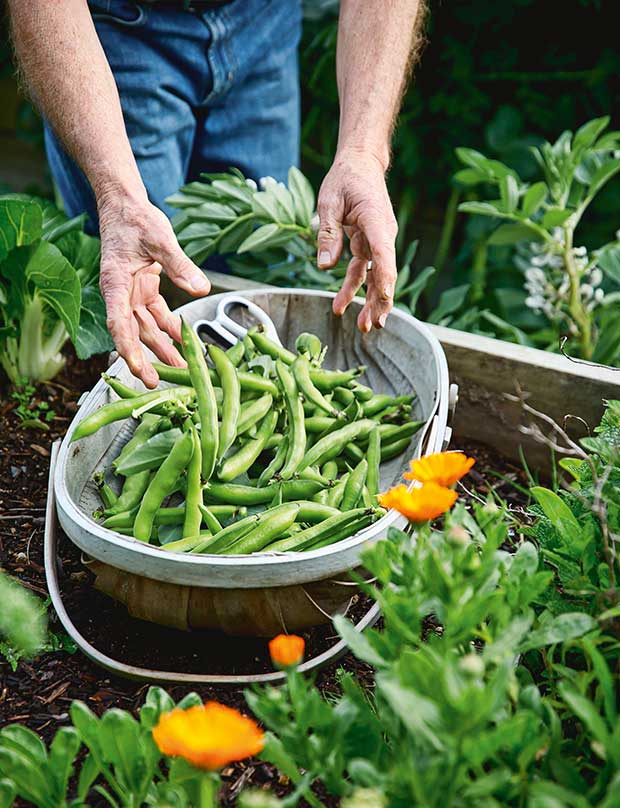 The veggie garden is Al’s empire.

Weekend pastime: Al and I both love being in the garden. There is always work to do but somehow it doesn’t (for the most part) seem like a chore.

Places to eat in Hawke’s Bay: The local country pub – The Puketapu. Blackbarn Winery is always good and Hunger Monger on Marine Parade in Napier has great no-fuss, delicious dining.

Balm or cream for stress relief: I reach for one of the Archeus Plant Essences or Elixir blends when I am stressed – they are like a hug in a bottle.

Books to help with life’s challenges: I find awareness of connections and cycles in nature can help bring wisdom and perspective to get through most challenges. One of my teachers, Sandra Ingerman, has written some lovely books on ways to get through the tough stuff.