Growing a family business at Wanaka Lavender Farm from This NZ Life on Vimeo.

Two brothers have turned a patch of Wanaka into a lavender business in full bloom. 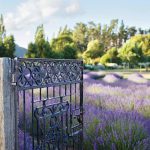 “We love recycling. And giving new life to quality, pre-loved things like an old gate adds heritage and stories to the farm. After hunting all around the South Island for the perfect gate, it was found on a farm down the road.” 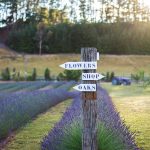 The signs directing wandering tourists were hand-stencilled, and the Massey Ferguson tractor taken apart and painted by Tim. It was originally red and grey, but with its jazzed-up paint job, it now can do double-duty as a roadside advertisement. 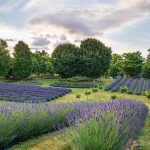 The Zeestratens often find impromptu photo shoots taking place in their garden; tourists, locals, and even bridal parties pose in the picturesque purple patches. But while requests flood in, Tim and Stef are, for now, leaving the actual hosting of weddings to the professionals. 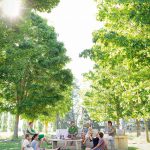 The outdoor furniture was crafted by Tim, who tracked down old scaffolding planks and “whipped it up”. 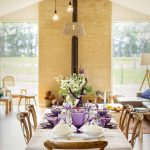 Corry’s table setting is colour co-ordinated and features a mix of modern and antique crockery handed down through generations. 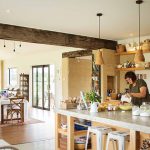 Designed and built in part by Stef and Tim, Jan and Corry’s home is the heart of the farming operation. From there, Corry (above) often bakes with lavender, including whipping up her favourite lavender honey cakes; their parents’ love of commercial gardening inspired both Stef (who grew up wanting to be a scuba diver) and Tim (who eyed up a career as a commercial tomato grower like Jan) to follow in mum and dad’s footsteps. 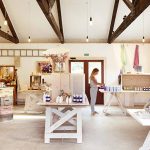 Lovers of handmade, locally sourced products rejoice – Corry keeps the store well stocked. “There are about 30 to 40 things that we make on site; the soap disappears out the door almost as fast as we can make it. It’s been fun to learn how to make balms, soaps, creams and more by hand. 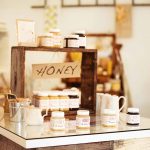 When not testing and creating, Corry (who first came to New Zealand as a 21-year-old backpacker) and Jan can be found biking the local cycle trails or heading off on an overseas adventure – last year it was the Camino de Santiago. 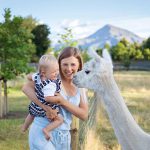 Tim’s daughter, one-year-old Maple, is absolutely animal mad. “I never need to worry about how to fill an afternoon,” says her mother, Canada-born Jessica. 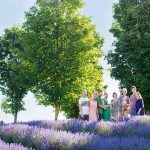 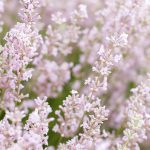 Three types of lavender grown at the farm- loddon pink. 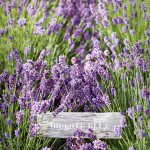 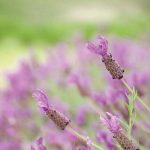 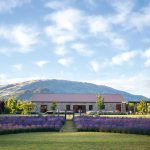 Mt. Barker keeps watch over the schist store and gently sculpted grounds. The 40 tonnes of Lindis schist used in the build was sourced locally.

Apart from a few rotund bovines, the land was bare when the two young men arrived. Twelve hectares of smooth-ish paddock, a blank canvas big enough for the most inspired of artists. They wandered around for a while, drawing plans with sweeping hands, gesturing and debating, before getting back into their car and driving away.

More stories you might like:
Why Dave Cotty finally gave in to his Mini Cooper madness (and hasn't looked back since) 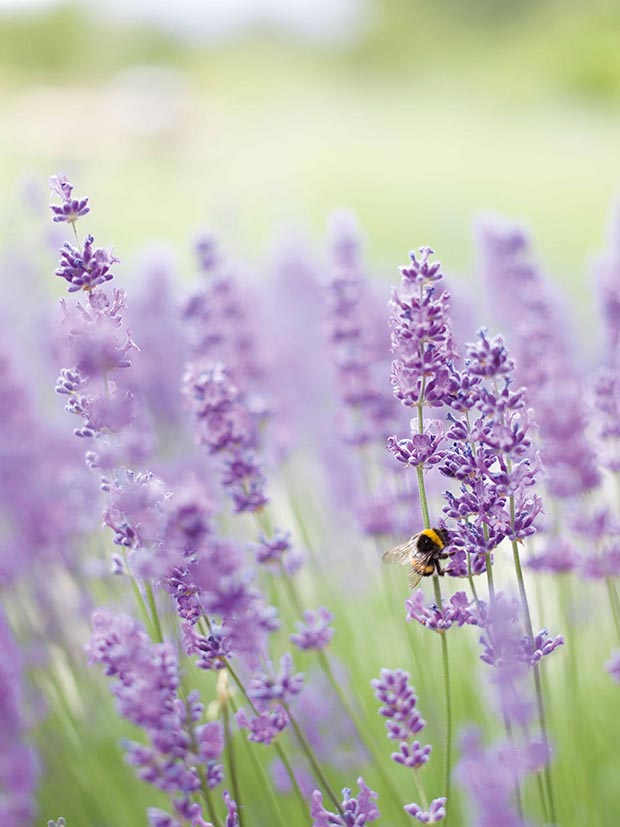 The men soon returned. The sold sign was knocked to the ground and once again they paced – but this time with purpose. The cows quietly plodded off to greener pastures and as the imprints of their hooves faded, the land transformed. Fences appeared, the rough terrain was marked out and tended, and tiny plants sprouted from the soil. The two men seemed never to leave, always there, always busy. As their hands blistered and their backs settled into permanent aches, the land became a garden and then in spring, the garden became a business. 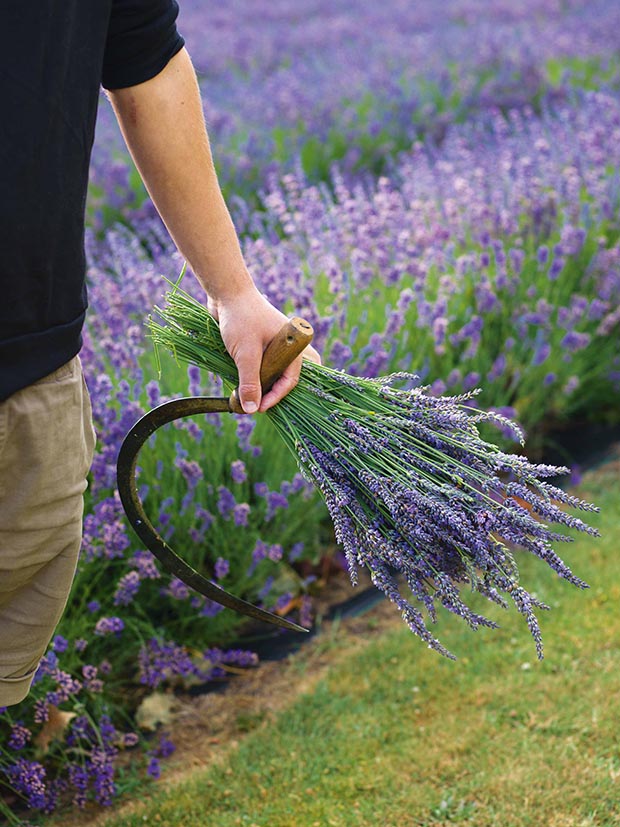 Five years on, the Wanaka Lavender Farm is unrecognizable from those early days. A patchwork quilt of lavender covers the grounds, vegetable gardens are full of healthy produce and in a stone building designed from plans once traced in the dirt, homemade lavender products are displayed on any and every available surface. As for the two men? They could be anywhere. Perhaps behind the counter, scooping lavender ice cream for a guest’s breakfast (yes, for holidaymakers, ice cream is a perfectly acceptable breakfast food). They might be found tying ribbons onto fragrant products or sickle harvesting bunches of lavender from somewhere among the 7000 plants. For brothers and owners Tim and Stef Zeestraten, no job is too big or too small. A postcard-perfect lavender farm is perhaps not the first place one would expect to find one of New Zealand’s top snowboarders and his engineer-cum-helicopter pilot older brother. They quite like the look of confusion that crosses people’s faces when they shake their hands and ask, so what do you do? A lavender farm you say? How interesting. Interesting, yes, but not that surprising. Stef (31) and Tim (33) have purple hearts and green thumbs. It’s in the genes. Father Jan is a second-generation commercial gardener and mother Corry was (and still is) mad on herbs. 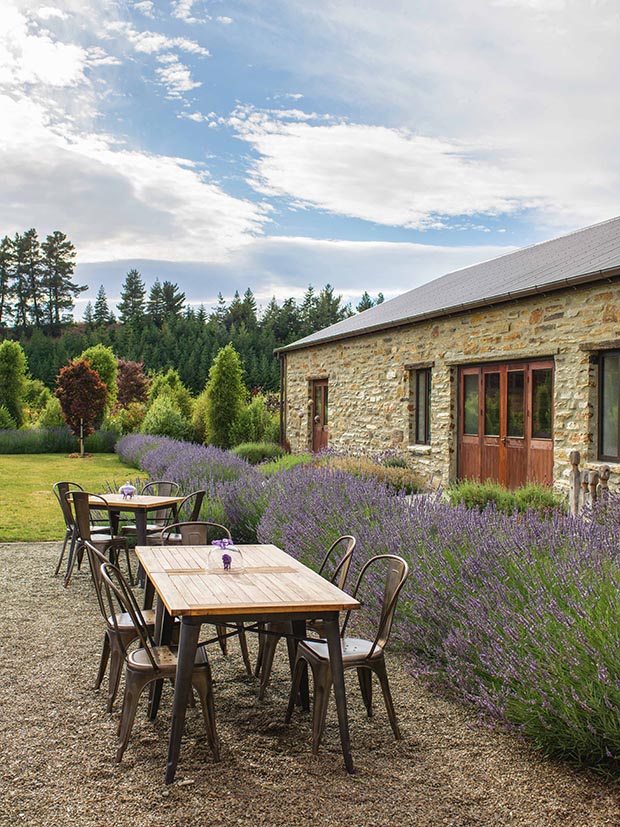 Corry and Jan emigrated from Holland in 1994 when their three children (sister Jettie now lives in Nelson) were eight, 10 and 12. Jan and Corry were tired of life growing greenhouse tomatoes, so “for fun” decided to move to New Zealand where Corry had hitched-hiked years earlier. Some 14 years growing commercial produce in Lincoln, near Christchurch, followed, before a year-long stint in Oxford was cut short by an unexpected email from Stef. In America for a snowboarding trip, he’d spotted a Kaikoura lavender farm on TradeMe and sent the ad to his mum for a laugh. Jan and Corry moved to the Kaikoura lavender farm a few months later. After 26 winters and one long working holiday snowboarding overseas, Stef was ready to “get a real job”. He turned to older brother Tim and the pair looked back to the green gardens of their youth for career inspiration. “Stef and I had been talking about what to do and where to go, joking about just replicating mum and dad’s farm in Kaikoura; we felt like they had nailed it.” 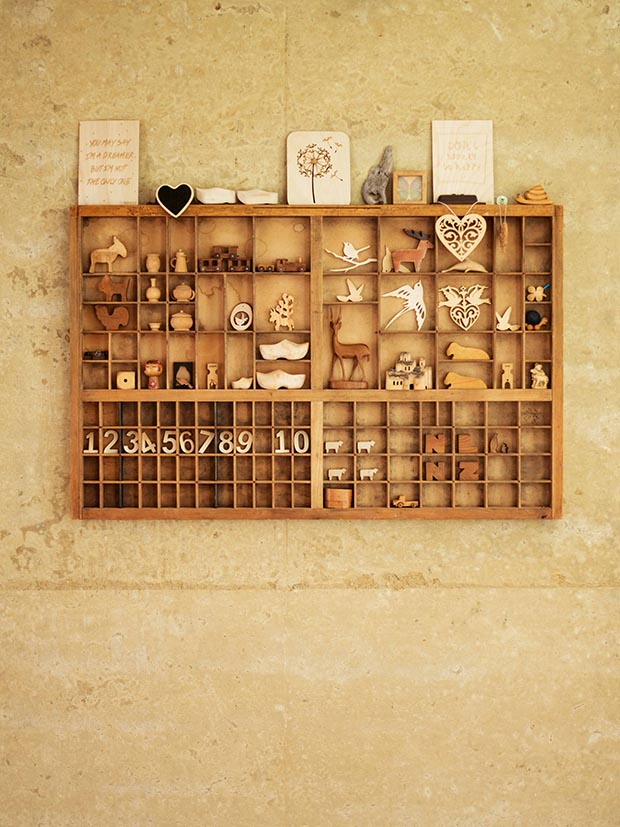 Despite Jan and Corry’s suggestion that the boys take over the Kaikoura property, the brothers had been determined to start a lavender farm from scratch. After finding the Wanaka farm, Tim broke the news to girlfriend of a few months Jessica (now his wife and mum to one-year-old Maple) that her engineer partner was off to grow lavender, and they moved in 2010. “Taking over from our parents wouldn’t have given us the opportunity to add anything to the business,” says Stef. “Here we have something to be proud of. Together we designed and built this business from the ground up. Tim and I dug the trenches for the plumbing; now when the water comes out of the tap, we know exactly how it got there. We know where the bore is and which pipe it’s coming from.” Tim agrees. “We wanted to do this properly, have a lasting, quality property. We put as many hours into creating it as the builders did – all to stick within budget. We knew we could create something nice; the hard part was not knowing if people would come.” 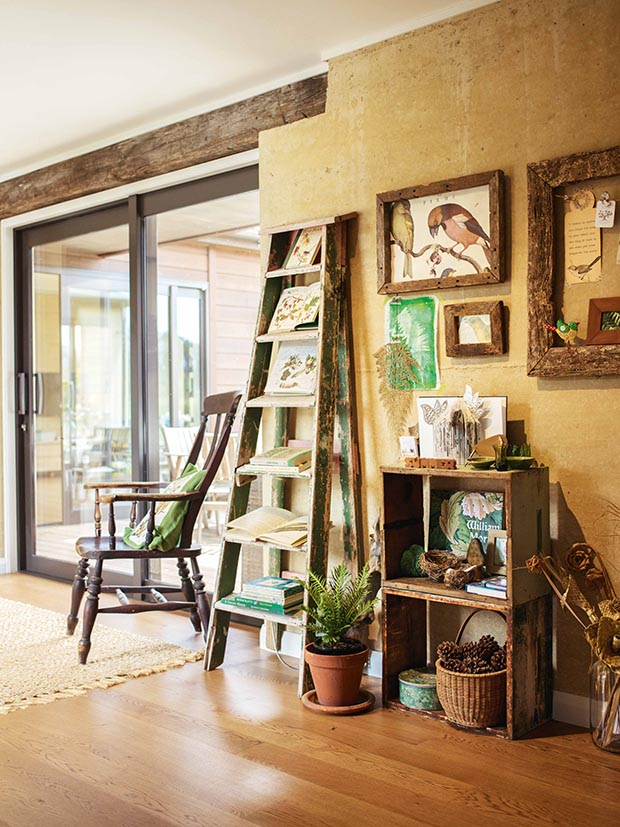 They needn’t have worried. At first, visitors arrived by the carload and now by bus. During the summer months, the driveway crackles with tyres from 9am to 5pm, and often beyond. “It’s never ending. If they keep coming past closing, we keep the doors open – after all, we have a business to pay off. It’s been three years of work with no income, and even now we pay the bills then everything goes back in the business.”

With only a $2 entry fee to the sprawling lavender gardens, the bigger opportunity lies within the stone walls of the shop and tearoom. Anything and everything lavender related is inside, and almost all is handmade by Corry and the Zeestraten family. Soaps, balms, wheat bags, muffins, cakes – “anything made with lavender, we will do it or at least give it a try”, says Corry. The farm produces about 50 litres of oil from the harvested flowers, distilled in Clyde and then crafted into the Wanaka Lavender Farm products. While the boys are working on perfecting their sales abilities, the products sell themselves. Overseas visitors often arrive, bundle products into their baskets and depart quickly, suitcases laden and scented with gifts for friends and family back home. They are gifts for family made by a gifted family. 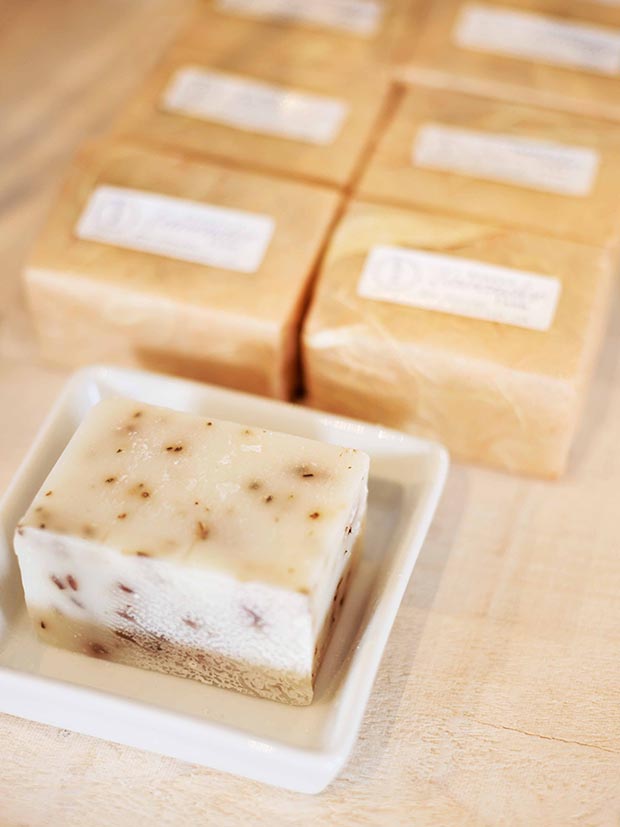 Retirement didn’t come naturally to Corry and Jan; while they were happy to give up the paperwork they loathed, they are no good with idle hands. Perhaps that’s why, after selling the Kaikoura farm, in 2012 they followed the boys to Wanaka. 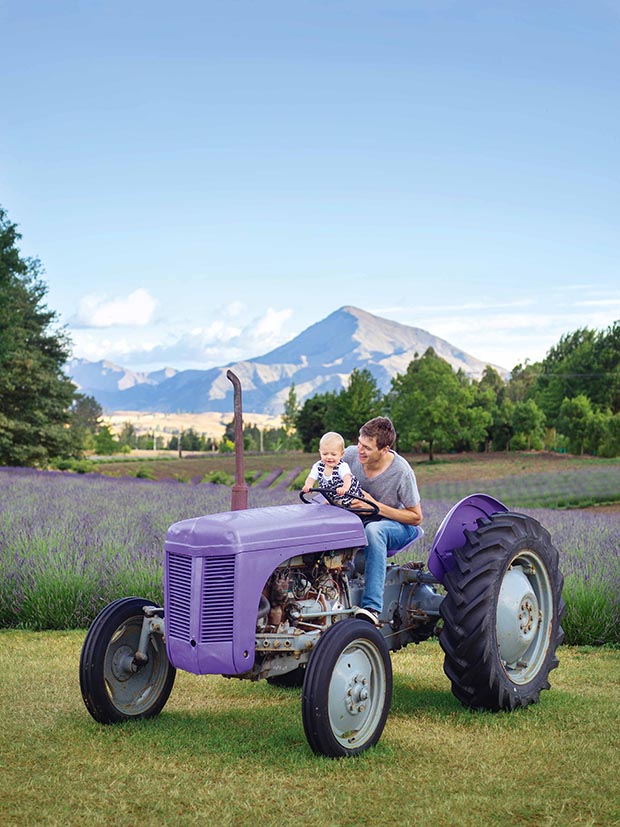 In true Zeestraten style, they shied away from Wanaka’s new suburbs and moved into a rammed earth home right next door to the lavender farm, designed by Stef and built in part by Tim. Cool in summer and warm in winter, the home was crafted to suit the family. “My greatest skill is knowing how to learn,” says Stef.

More stories you might like:
Buy the Best Artisan Food Products in our new thisNZlife Farmers' Market

“Designing a home was like facing a giant puzzle, the fun was working out how to solve it. Even better is being able to show up for Sunday roasts to enjoy it.” Tim’s mechanical engineering career may have equipped him for many things and building his parents’ house was an unexpected opportunity. “There was nothing to dislike about my previous job but I felt I needed more of a challenge, rather than having my path mapped out. I’ve no regrets as it taught me so many hands-on and transferable skills.” 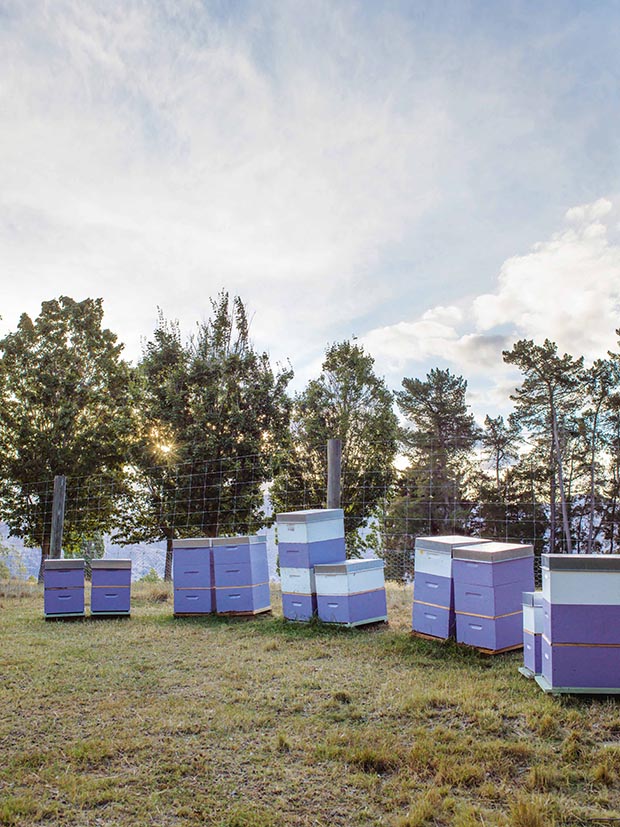 Sitting down for Sunday dinner is a luxury for Tim and Stef – being open seven days means 75-hour plus working weeks and few moments to step back and view the farm through fresh eyes. When they do, they see things beyond the till and lawnmower. Couples pose for photos in the fields of lavender, children pet the alpacas and baa at sheep and families enjoy picnics and compete at pétanque. All this takes place to the soundtrack of the flight of the bumblebee – not the iconic music of Rimsky-Korsakov but thousands of bees (both honey and bumble) waltzing along the lavender lanes. “First thing in the morning is the best time to be here, when the wind dies down, the gates are shut and all is quiet. That’s when we pause and see it for something other than putting bread on the table.”

TIM AND STEF: FROM THE GROUND UP

– The council approval process was our biggest challenge. Getting everything in place and signed off was time-consuming, but it meant we had extra time and space to get the designs right. We built everything to feel and look rustic, no precise smooth lines.

– We’ve had to work with nature – not only in trying to be as eco-friendly as possible but building through the seasons. We spent one memorable morning picking ice and snow out of concrete, and the reinforcing rods froze just before the concrete trucks were about to arrive. That was a cold winter’s work. – We’re lucky that our business needs time to grow – we can’t throw money at it to make the plants  grow quicker – which has slowed us down and kept us on track.

-Working with family has highs and lows – there are days when they drive you mad, but you know everything will be okay in the morning. There are always tough times; everyone’s opinionated and wants to be heard or share their idea, but we’ve grown up together, we know each other’s weaknesses and strengths and we combine our skills to balance the business well.

1. Start early and work extremely hard.
2. Work with your hands.
3. Manage your funds efficiently.
4. Finish what you start.
5. Don’t waste anything – whatever’s left goes to the chickens.