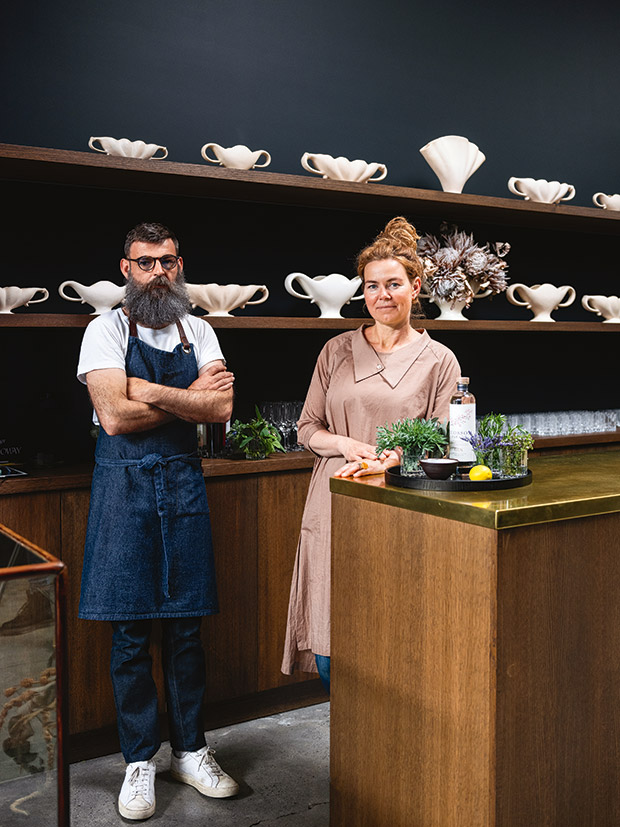 Two former winemakers are creating gin and other spirits, capturing the essence of the region in which they live.

Kate Galloway has a highly developed olfactory capacity. Similar to the small feathered creature by which New Zealand’s countrymen and women are colloquially known (and which, just saying, has the largest olfactory bulb of any known bird), this Kiwi and her French partner David Ramonteu are often to be found sniffing about in the bush.

Even as a child, Kate knew her nose was not like others. “I could smell something burning far away that others couldn’t.” An unattractive aroma wafting about could overshadow family picnics; the outing ruined for her and her equally-as-sensitive siblings. It is a family thing, this nose. She thought a career in perfume would suit her until she realized that almost all perfumes caused her head to ache. They still do.

Her chosen, and successful, career — as a winemaker — did use her excellent nose to advantage and introduced her to another fine “nez”, though not of the Kiwi variety. She met David (from the Jurançon wine region of south-west France) among the barrels at Ngatarawa Wines in Hawke’s Bay where she was working and he, from a French winemaking family, was getting overseas experience. After separate world travels, they returned to Hawke’s Bay and have created and sold two wine brands (Alluviale and DaDa) and had two children Gala, 14 and Saul, 12. The wine brands each achieved success, with Alluviale chosen to represent the best of the Gimblett Gravels terroir at international showings and a bottle of DaDa so accurately embodying the modern story of wine that it is represented in the San Francisco Museum of Modern Art.

When it seemed that wine would be on their horizon as a forever career due to David’s family commitment to their wine estate, Domaine Cauhapé in France, the pair thought to take some time out. In 2015, they set off to smell a few other roses. To say they went a bit bush is to fail to capture the extent of the three-and-a-half-year quest that followed.

Kate and David began gathering and cataloguing what they found wherever they went. A leaf of that, a frond of this, a piece of bark from there… bay leaf, gentian, lime, pine, geranium, lavender, coriander, eucalyptus. When they discovered something of potential interest, it was carefully plucked and carried home to be studied and identified before a distillation captured its flavour. Then came the serious work of describing each sample’s unique flavour and mouthfeel. Over three years, the couple built an olfactive library in which they’ve catalogued hundreds of botanical samples into nine flavour families, including savoury/vegetal, sweet/spice, citrus, earth/root, anise and pine.

This was a complex and laborious business, but the library of complex aromas and tastes forms the basis of their business, Hastings Distillers.

Sometimes even they wondered if they were going a little too far — like the occasion in which David described something as smelling like a “freshly washed pet bunny rabbit”. “I didn’t know you had a pet rabbit,” said Kate. “I didn’t,” he said. “But if I did, I’d expect it to smell like that — slightly musky and sweet.” “Go and eat something,” Kate told him.

The point of all this finding, sniffing, distilling, tasting and cataloguing? To paint, in a spirit, a palate embodying the home of their botanical samples. This is at the heart of the burgeoning contemporary gin movement, or gins that push the boundaries with unique flavour profiles.

Meet Albertine, the first gin made by Kate and David, and such a charming and complex creature that it won gold at the International Wine & Spirits Competition in London in August 2020. They entered the competition not only because it is among the world’s most prestigious but because they wanted the judges’ tasting notes. (The IWSC is one of the few international competitions to make tasting notes available post-competition.)

The judges described Albertine as having a “complex and perfumed nose”, noting that Albertine is “layered with intense lemon, pine and fresh green fruit… fruity, refined and fragrant… complemented by a clean balance of juniper and fresh fruit”. The pair was thrilled with this description. 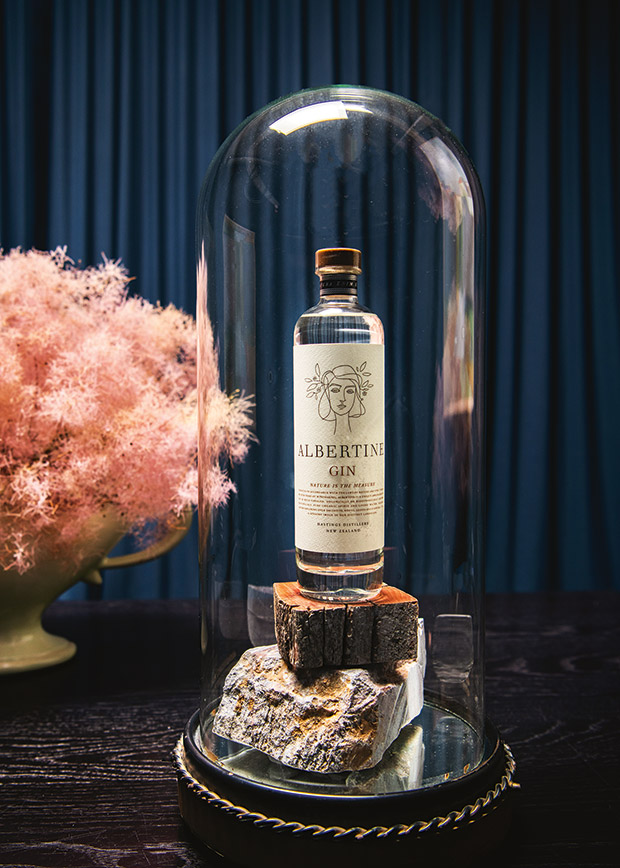 “Gin starts as a blank canvas, and that is why it has become so popular as people around the world put their stamp on it. Our gin is getting recognition for its array of flavours. They have strong personalities, quite different from each other, so while great as a G&T, they shine in specific cocktails,” says Kate.

All good; another burgeoning booze business heading for an international buyout. No. Quite wrong. At the same time as Kate and David were gathering and marking distilled botanicals on a very complex flavour profile, they were turning their backs on almost every piece of conventional commercial wisdom.

“I can do social media for you,” said one adviser. “No, thanks,” they replied, “we don’t intend to use social media.” “Business suicide,” the adviser retorted over a departing shoulder. “What trends are you studying?” asked another.

“None, we’re focusing on making something beautiful and hoping others find it beautiful, too.” No business plan, no modelled demand graph, no cost and profit predictions. “We are an accountant’s nightmare.” A year ago, after three or so of battling to get local council approval to have their imported German-made bespoke still onsite, they moved it elsewhere and opened a tasting room and education centre in the heart of Hastings. And yes, the people did start coming.

“We opened in December 2019, and it took off with such a hiss and a roar that we didn’t get a moment to develop a website, so we spent lockdown doing that. Now we are selling everything we can produce. No social media presence at all, just looking after our customers.”

They’re up to six staff now, some part-time and all valued for their skills and enthusiasm, and there are new distillations added to the range. A Campari-style bitter-orange aperitif called L’Opera, a seasonal gin called Blossom Parade (as ephemeral and joyous as the gentle cascading blossoms of spring itself) and East Block 200, which represents their locality, and has just 10 local botanicals — compared with the 38 in Albertine. They’re working on a vermouth, so their customers can create their own Hastings Distillers negroni (see below) from scratch.

Some of the botanicals they cultivate themselves in a gin garden, others are grown or gathered from the gardens of friends (angelica, wormwood, lavender, coriander seeds, bay leaves). Local citrus growers supply the fruit for the L’Opera aperitif — all organic and many biodynamic.

Who knows where this couple led by their noses to follow their hearts will go next. But it’s a fair bet nature will be holding the reins.

WHAT IS A NEGRONI?

One-part sweet vermouth, 1-part gin, 1-part L’Opera (or bitter-orange Campari-style aperitif) “If you are having just one drink, a negroni is punchy and full of flavour. Make it with the finest ingredients,” advise Kate and David. WHAT WE’RE DRINKING THIS SUMMER

“For a late evening drink, Albertine on the rocks is a great alternative to whisky. It’s complex and refreshing. We also like locally made Brave Brewing Tiger Milk IPA. It strikes a great balance between being full-bodied yet thirst-quenching. It’s citrusy and it has a tropical summer feel.”

David, like many French people, enjoys a glass of chilled red wine. “It might not make some winemakers happy to know that I often chill their wine but one that endorses it and is particularly delicious on a hot day is Te Mata Gamay Noir.”