Hospice hero: Why this 94-year-old volunteer has devoted decades to Otago Community Hospice 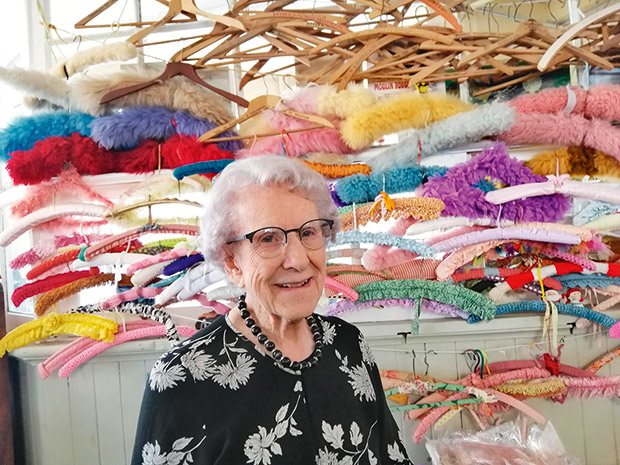 Despite retiring long ago, this Dunedin nonagenarian has no intention of stopping work as a hospice volunteer.

At 94 years old, Helen Bardwell still potters around her garden and eats everything she shouldn’t. In normal times, she drives her car and attends an exercise class every Wednesday. The retired primary school teacher still volunteers at the Otago Community Hospice, going on 25 years of service.

“I may be getting very old, but I can still work in the hospice shop,” she says.

She remembers when hospices didn’t exist in her hometown of Dunedin. The global hospice movement first gained traction in Otago in the 1980s, aiming to provide equal access to palliative and end-of-life care. The city’s first hospice opened its doors in 1990. But it was too late to provide comfort for Helen’s sister, who died of cancer in her 40s.

“She had no help whatsoever with her four children. She lived on pills until she died. It was sad. When I learned about hospice, I wished it could’ve been there for my sister,” Helen says.

She began volunteering in the hospice kitchen in 1995, later adding shifts at the hospice shop in Bond Street. She retired her cook’s spatula two years ago and shifted her focus entirely to a world of pre-loved homewares and knick-knacks.

These charity op shops are essential to raise funds for hospices so their services can remain free for people with life-limiting illnesses, and their families and caretakers. The Otago Community Hospice has six hospice shops around the region, which partially subsidize what the Southern District Health Board doesn’t cover.

“Some people still think the hospice is just a building where people die. But it’s so much more than that. The hospice is no longer just about in-patient beds — it’s now focused on providing amazing community care. The hospice offers a holistic view, looking after everybody concerned with the patient. It’s not just a place of death.”

Every Friday, a volunteer collects Helen from her home for a four-hour shift. The shop keeps her on her toes with cleaning, pricing items, and offering counter service to keen bargain-hunters. Helen has never seen age as interfering with her usefulness.

“People ask me what my secret to health is, but I don’t have any. I don’t worry about my diet. I can’t drink alcohol – I’ve never been able to as I get as silly as a two-bob watch. I have good genes. I’m one of the lucky ones.”