Chocolate and chilli: a match made in heaven 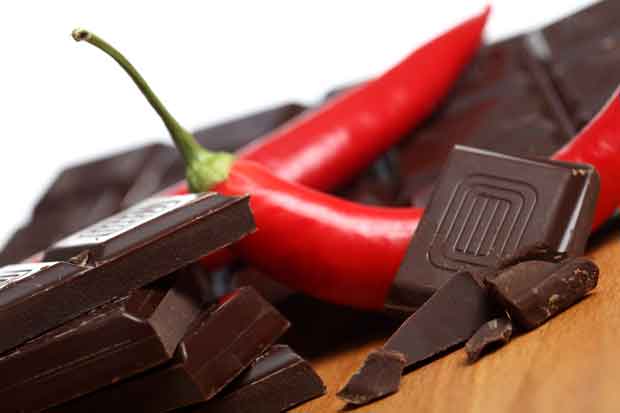 What happens to your body when you eat chilli and how do you put out a chilli fire in your mouth? We answer these burning questions.

It was a flying visit to the Flying Burrito Brothers Cantina in Christchurch. Our gift voucher was expiring that day so we spontaneously concocted a lunch-movie excursion to Christchurch. Lunch would be sandwiched tightly between shopping and a movie, and burritos sounded like a casual affair so we figured on a quick bite and then off.

But one look at the enticing drinks menu and it was evident we wouldn’t be out in a hurry. Various cocktails with tequila and refreshing fruits – limes, lemons, kiwifruit, lychees – were immediately tempting, there were ‘sours’ featuring passionfruit, feijoa vodka, lemons and bitters, and more, like a Mexican sangria, a red wine-based drink with fruit.

Ken and I started with two traditional margaritas, one virgin and one with tequila. They arrived with the chilled rims encrusted in salt according to tradition. The combination of salt, sharp, sweet and sour in the virgin margarita is surprisingly refreshing on what was a hot day and you can imagine them working in a hot climate. The traditional tequila margarita is another thing – a few swigs of that on a hot afternoon and I would be in siesta!

Ken confessed to the waitress that we were here ‘undercover’, investigating flavour combinations for a Mexican-themed dinner. The idea of a chocolate chilli sauce over enchiladas piqued the interest so she brought out a tasting. A chilli bite in rich, velvet chocolate with a sour undertone was on the definite shortlist for further investigation.
Ken and I got enchiladas. We ordered mild, but decided the rating was fairly conservative and next time we’ll go for at least medium.

Halfway through we discovered Ken has booked the wrong movie – I’m sure this never happens in other people’s households! – so with an extra two hours to kill we moved onto part two and chose a Mexican flan, a caramel custard dessert. This looked challenging to make to me, but Ken liked it. He thought it would be much more interesting with a chocolate chilli sauce and I saw another experiment on the horizon.

So what was the outcome of all this? The week following was a frenzy of experimental activity as Ken transformed the ideas collected into a medley of Mexican-themed dishes. His three-course Mexican fiesta included an appetiser of corn chips with salsa and hot cheese dip, a main of enchiladas with chocolate chilli sauce, chilli bean and pepper salad, all followed by a scrumptious dessert of butterscotch flan with chocolate chilli sauce. This ambitious banquet for nearly 100 ended with a standing ovation for the chef.
As for the Flying Burritto Brothers Cantina, we hardly tested the menu but they got five stars from me – I’ll be back!

Capsaicin is the main ingredient in the non-lethal weapon pepper spray. Milk to the rescue! Milk products give relief after eating chillies as the milk protein casein breaks the bond between pain receptors in the mouth, throat and stomach and the capsaicinoids.

The Mayans have a word, ‘huuyub’, meaning to take a breath with a puckered mouth after eating chilli peppers.
According to the Guide to Non-Poisonous Plants, if a Mexican dies on the prairie the vultures will not touch the body because it is so impregnated with capsicum.

Wild chilli peppers were eaten in Mexico as early as 7000BC and cultivated as early as 5000BC. Columbus first encountered them in the Caribbean and named them pepper because they had a ‘fire’ (hot, spicy taste) similar to the black and white peppers known in Europe (Piper genus). Before long, chillies had spread along the spice trade routes from Europe south to Africa and east to Asia where they quickly ‘fired up’ the local cuisine.

Botanically, chillies belong to the Capsicum genus and are part of the Solanaceae family, which includes nightshade and potato. The most common chilli pepper species are:

HOW DO THEY WORK?

Chillies get their intensity from capsaicin and several related compounds. Capsaicinoids bind with pain receptors in the mouth and throat, sending a message to the brain that something hot has been eaten. The brain responds by raising the heart rate, increasing perspiration and releasing endorphins.

Warning: keep fingers away from eyes when handling chillis and preferably wear gloves! 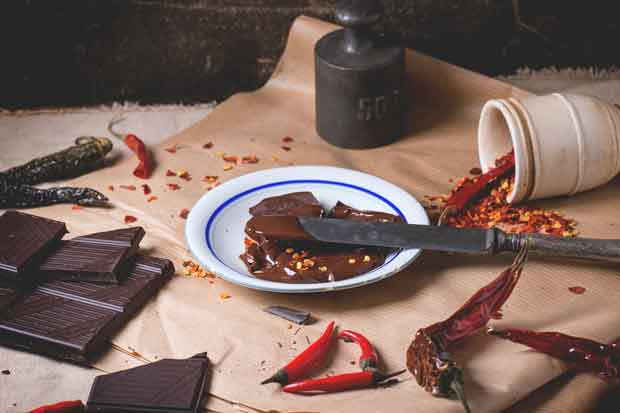 This chocolate chilli sauce can be adapted for savoury or sweet dishes.

Finely chop the chilli and lightly sauté in the butter/oil. Remove from the heat and stir in the cocoa until smooth. Return to the heat, set very low, and gradually add the milk, stirring constantly. Do not boil. Break up the chocolate and add, stirring continually until melted.

Sift the icing sugar and add 1/3 of a cup for savoury uses – eg, on enchiladas – and up to the full cup for dessert use. Keep stirring until the sugar is dissolved and the sauce is smooth and free-flowing. It can be set aside and gently reheated when needed. Stir in a little more milk if the sauce thickens too much.