On Fogo Island, at the frigid fringe of Newfoundland, Canada, where the North Atlantic is so bitterly cold in winter it freezes as it touches the lip of the shore, new life is blooming. Once it was only the icy wind that took the breath away but now it’s brilliant architecture on the barren outcrop also leaving viewers gasping. Strange And Familiar: Architecture On Fogo Island documents striking geometric buildings that line the rocky seashore.

These artists’ residences are designed to rejuvenate this former fishing village into a tourist retreat. The project is the brainchild of multimillionaire Zita Cobb and architect Todd Saunders. Zita spent her early childhood on Fogo until one day her father ordered her and her six siblings to pack up their bags to move to the mainland.

“For 400 years the people fished in tiny little boats but in the 1960s came immense factory fisheries. Boats bigger in size than eight buildings came within five miles of our shore,” says Zita in the documentary.

“The fish got fewer and fewer… until one day dad came home with one fish and he brought it up to the house and he threw it onto the floor.” 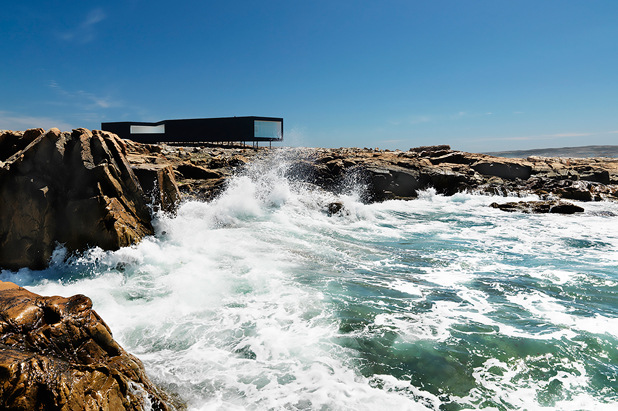 The Long Studio on Fogo Island.

Zita became a successful executive in the tech industry and used her fortune to give back to the Fogo community, where the population had dwindled to less than 3000.

The specular cinematography of this documentary highlights the stark contrasts between the modern design, colonial folk architecture and wild elements of Fogo. A must-see for any fan of ambitious architecture and Grand Designs, but at 54 minutes in length, those more interested in learning about the Newfoundland community and Zita’s own story will feel like they have only seen the tip of the iceberg.

Strange And Familiar: Architecture On Fogo Island 2014, is playing in the Resene Architecture and Design Film Festival