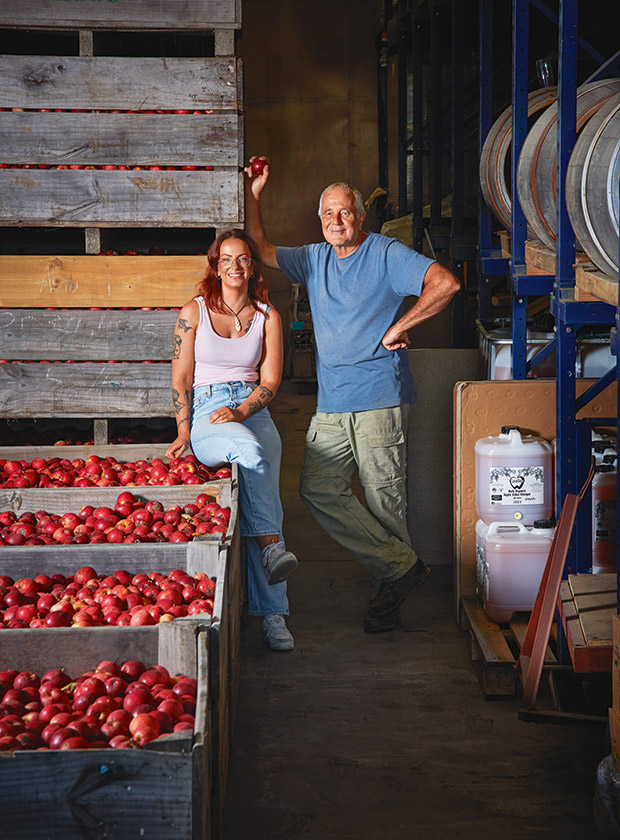 From organic apples to apple cider vinegar, an Ōtaki business has had a common-sense evolution. The progression from vinegar-maker father to daughter is just as logical.

Zhana Baker takes her work home just the way her dad did. “When I was little, my dad always smelled like vinegar, so to me that was just how he smelled. Now, when I come home, my partner says, ‘Wow, you smell so strongly of vinegar.’ I can’t smell it anymore, but the factory does smell very strongly of vinegar. It’s my main childhood memory.”

That tang is also very much in her future, as 27-year-old Zhana is poised to take over CoralTree from her father. Kim Baker started the business, now an Ōtaki-based organic apple cider vinegar operation, after buying an apple and pear orchard a little further up State Highway One in Levin in the early 1980s. He converted the orchard to organic, becoming one of the country’s first organic apple orchards, and grew a wide variety of fruit trees, many of which are now considered heritage.

“We started with Oratia Beauty and Cox Orange, Golden Delicious, Red Delicious, right through to Granny Smith and Ballarat. A real mix of apples,” he says. 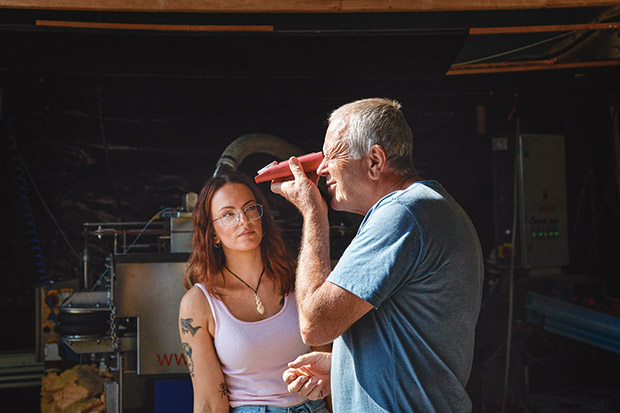 It’s tough to squeeze profit from apples, so Kim decided to press them into juice. “It’s quite difficult to hold apple juice and keep it fresh, so we started making some apple cider. Then some of the cider turned into vinegar, fermenting from the natural yeasts in the environment. The health food shops we supplied with apple juice became more interested in our apple cider vinegar, so we turned our attention to that.”

In 1993, with an infant Zhana in tow and the orchard organically certified, Kim flew to Christchurch for an international organics conference. He presented his vinegar in recycled wine bottles with plain hand-fixed stickers, but a representative from Hong Kong was impressed. “He said, ‘If you can make your apple cider vinegar in reasonable quantities, I will take it to Hong Kong and sell it for you,’” says Kim. “So, me being me, said, ‘Yes, we can do that, no trouble,’ then started panicking about how we could pull it off. But we did.”

With its robust packaging, long shelf life and simple phytosanitary requirements, apple cider vinegar is an “almost bullet-proof” product to export. CoralTree now sends about 80 per cent of its 300,000-litre annual output overseas. Some goes to Australia, but the most important markets are in Asia. As Kim says, apple cider vinegar is well regarded in traditional Chinese and Ayurveda medicines. Zhana is herself an advocate for a splash of apple cider vinegar in a glass of water twice a day — before breakfast, then just before her evening meal. “A small amount regularly is the key. I certainly feel it helps balance the digestive system and keeps everything working efficiently. If I’m feeling rundown, I’ll have apple cider vinegar in a hot drink with a little bit of ginger, lemon and honey. I also use it in salad dressings or marinades.” CoralTree recommends adding a dash of vinegar to water for a calorie-free burst of taste or using it to add flavour to meals without adding salt. It’s also good splashed sparingly over cooked greens, or used in a coleslaw dressing, rather than opting for the usual mayonnaise.

To those unfamiliar with the unfiltered, unpasteurized version of apple cider vinegar — which CoralTree is — its cloudy appearance and the floating strands of the “mother” can be a little unsettling. It almost looks alive, and it is, which is the point, as the mother holds all the proteins, enzymes, and good bacteria that Kim and Zhana say makes apple cider vinegar such a great product.

Zhana trained as a hairdresser (and she notes the vinegar is suitable as a rinse for a flakey scalp), but her longest apprenticeship has been in making vinegar. Kim is preparing for “the next stage of life”, which includes moving to Northland where he will surround himself with trees again — native bush this time — and hand CoralTree over to Zhana.

“It’s a huge honour to carry this on. I’ve heard my dad speak about it all my life, and I’ve experienced the benefits of apple cider vinegar. I’m well equipped to take over the business. I felt like if anyone’s going to do it, it’s going to be me,” she says. 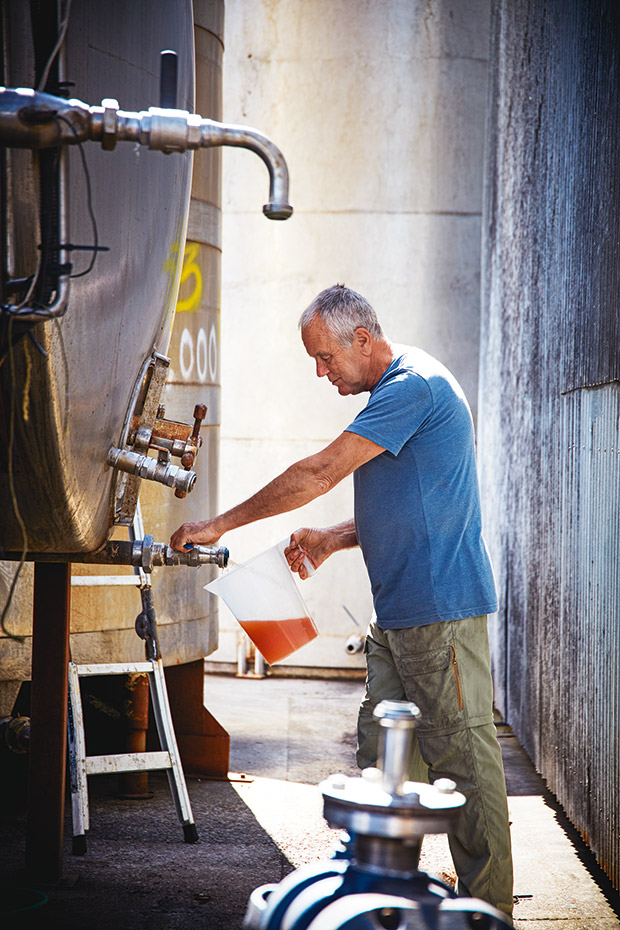 “It’s amazing to see Zhana stepping into the business and being able to understand it in the way she has,” says Kim. “There are lots of little things she’s picked up as a kid while following me around that I didn’t formally teach her, so she’s learned a lot by osmosis. She’s a much better people-person than I am, so I think she will move the business along.”

Zhana plans to grow the business — maybe by offering other fermented products, such as sauerkraut or kimchi, or sauces, marinades and salad dressings. But through autumn, it’s all about the primary business of pressing the 450 tonnes of apples that arrive from Kāpiti and Hawke’s Bay growers (the Bakers’ last orchard was forced to give way to the Kāpiti Expressway, so Kim decided to stop growing his own).

The squeezed apple juice is held in tanks for its sugars to ferment into alcohol, which is encouraged from the factory’s natural yeasts and bacteria. Then the alcohol is converted to vinegar by a secondary fermentation from more natural bacteria that form acetic acid. Sometimes a quick injection of last year’s best batch is required if Kim or Zhana’s noses detect things aren’t going quite right. But most of the time, the vinegar ferments nicely, expelling the appley tang the Bakers — father and daughter — are more than happy to take home.

More stories you might like:
Clevedon Herbs & Produce win the Spirit of New Zealand award at the 2020 Outstanding NZ Food Producer Awards 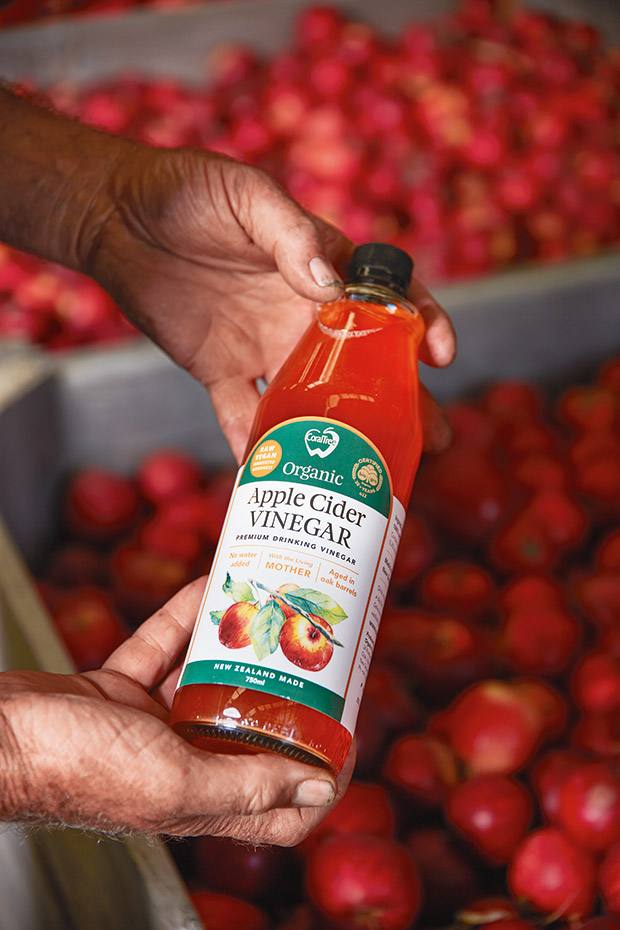 In a large glass or cup, put a thumb of minced ginger and a teaspoon of honey. Mix in ¾ cup hot water, then fill with cold water. Stir in 2 teaspoons of apple cider vinegar.

Put the garlic and ginger in a jar. Heat the olive oil in a pan.

Once hot, add the oil to the jar with the ginger and garlic. Leave for five minutes, then mix in the honey, apple cider vinegar and soy sauce.

Season with salt and pepper to taste. Shake, then pour over salad.

Mix all ingredients and add salt and pepper to taste. Pour over chicken, leaving it to rest in the fridge for a few hours before cooking.