How shiitake happens: 7 reasons why beginners have problems growing this popular fungi 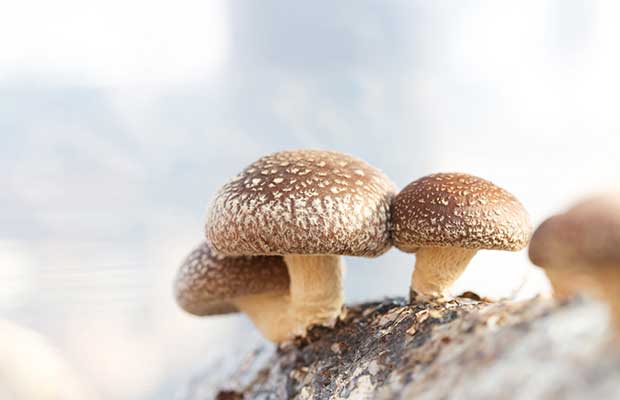 These gourmet mushrooms can cost you around $60-$90 per kilogram, or you can grab your chainsaw and grow them yourself.

Eating shiitake mushrooms can improve your gut immunity, prevent weight gain, and they contain phytochemicals that lower cholesterol levels. Better yet, they taste great thanks to their high levels of lip-smacking umami flavour.

While growing kits for oyster mushrooms, one of the easiest edible fungi to grow at home, are becoming increasingly popular, shiitake are a different kind of fun-gi. With oysters, all you need is a pre-prepared grow bag, some basic watering, and you can harvest a crop as quickly as 12 days later, depending on the time of year and the humidity.

“Shiitake are definitely the longer beast,” says Mushroom Gourmet’s Tim Thornewell. “Most people will be inoculating logs, and it takes time to colonise it, plus there’s a lot of other variables. It can be as quick as six months in some parts of Australia where it’s 40°C, and up to two years on the South Island’s West Coast.”

Tim sells DIY oyster and shiitake mushroom kits and has been helping beginner growers for almost 30 years. He also sells dowels, short, round pieces of wood inoculated with shiitake spawn. 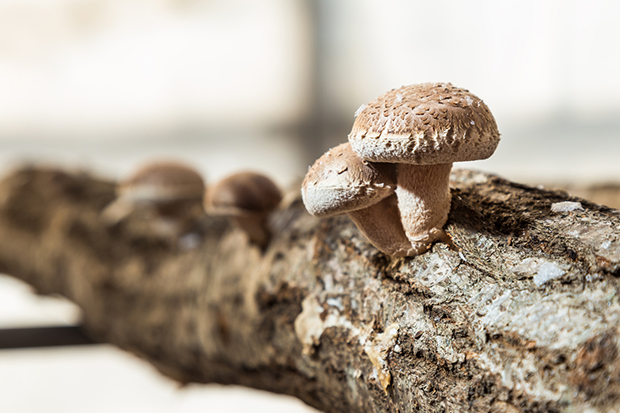 – cut some logs for the shiitake to grow on;
– clean off any lichen or moss using a wire brush;
– drill holes and insert the dowels, then plug with candle wax, beeswax, or PVA glue;
– keep the log in a shaded, humid place with good airflow and water regularly;
– after 6-24 months (depending on conditions), submerge the log in water for 24-48 hours to trigger fruiting.

You can grow shiitake in a bag, similar to oyster mushrooms, but if you’d like to do it in a more traditional fashion and use dowels, a supplier should include the basic instructions on how to successfully inoculate a log and grow the mushrooms.

But every year, Tim gets calls from disappointed would-be shiitake growers.

“What really gets me on some websites is people suggest you can go to your local firewood merchant, stick some dowels in it and grow shiitake mushrooms. It’s isn’t true. They also inflate the yields you can expect, and they’re unrealistic.”

Tim says these are the most common reasons why shiitake doesn’t happen.

Fungi love deciduous hardwoods. Shiitake particularly like to grow on oak, poplar, tawa, beech, birch, alder, and ash. They don’t like pine, other conifers such as macrocarpa, or walnut.

If you’re not cutting branches off your own trees, Tim recommends getting logs from an arborist or tree surgeon, if you can get them at the right time of year. You can use a log from 3-5cm thick, but these dry out very quickly. Tim’s recommendation is one that’s 15-30cm thick and as short or long as practical.

“You have to carry (the logs) in their early life and dunk them in a bath of water, so probably 30cm is as wide as you want to go, and maybe 1m, 1.5m long at most, or cut them shorter – make them a weight and size that’s easy for you to handle.” 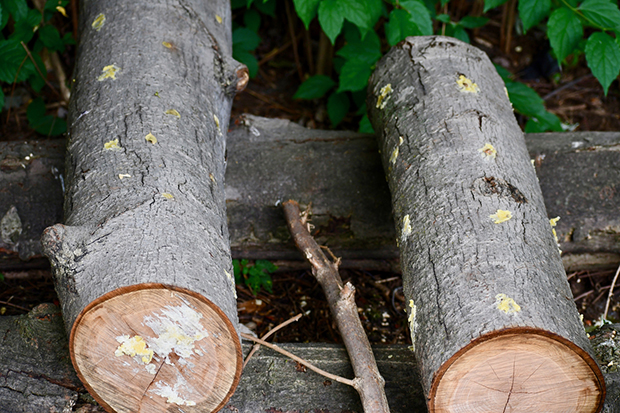 A close-up of newly inoculated logs, with the holes covered in beeswax.

2. YOU CUT YOUR LOG AT THE WRONG TIME OF YEAR

You want to cut the log when the tree’s natural sap flow is low, which is when a deciduous tree’s leaves start to change colour.

“The ones that are easy are oak, birch, beech, and tawa,” says Tim. “You can cut them any time after the leaves have changed colour in autumn, right the way through to a week or two before buds swell. Trees like poplar and Salix nigra (black willow) need to be cut more than four weeks before bud movement (when a dormant bud begins to swell).

After that, it gets tricky. Some trees are ok to cut for up to six months, others start sap flow earlier. If you cut a log once the sap is about to start flowing, the bark will come off the log after six months to a year. That’s bad news because the shiitake grow under the bark. If the bark falls off, you get a greatly-reduced crop.

There is a second window of opportunity, when a tree’s leaves go dull after the first spring flush, indicating sap flow has slowed.

“So the leaves start all shiny and bright in spring,” says Tim. “But once they start to dull, you can cut again if you missed your chance the first time.”

3. YOU ACCIDENTALLY CONTAMINATED YOUR LOGS

The same conditions that shiitake love are also popular with other organisms. Tim says he’s read instructions online that say to soak a log before you drill the holes for the dowels, but he warns there are downsides.

“You run the risk of germinating the spores that are already in the bark and then drilling them through into the timber that should be sterile and fresh. When you tap your dowel in, you get a war (of competing fungi).” 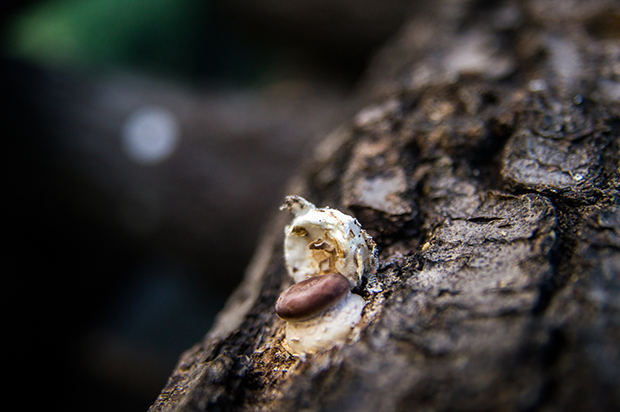 Your logs might be sitting out in rain, drizzle, and mist, but that’s not enough, says Tim.

“You really have to keep your eye on log moisture or else the logs just turn into firewood. Turning the hose on them is the cheapest way, but most people forget, so the best thing is to have a sprinkler on a timer.”

Tim says he’s successfully grown shiitake on logs sitting under an old loquat tree, but his best-ever spot was a log that was under a propagation bench in his shade house.

“The tricky thing with mushrooms is they like moist, misty mornings, but they also hate having stagnant air, so how do you get nice airflow and not have water evaporating so that it dries logs out? There’s an art to it, and a fair amount of science to get on top of.

“I used to have mesh around the shade house and ran misting units so the air was going through moist – you don’t put logs under an actual drip, but close enough that it might get splashed. However, if the bark never dries out, you’re going to get bacteria and weed fungi germinating in the bark.”

Logs can tolerate a bit of morning and evening sun, so you can also place them in deep shade under trees. One of Tim’s commercial shiitake clients uses special sheds. “We’ve got a grower in the Manawatu with hundreds of logs and he’s got them inside a shed with open sides. He can adjust the airflow, dampen the floor, and that controls the humidity.”

Weigh one of your logs when you inoculate it, and then check its weight every month, or more often if it’s very dry.

“If it starts to lose moisture (weight), you’re not watering it enough. In a really sophisticated set-up, you have a master log on a load cell or scales. If the log drops below a certain weight, misters turn on automatically.”

5. YOU WATERED IT TOO MUCH

The right moisture levels are critical, but too much can be a problem.

“When you’re watering, you need to ensure the surface (bark) dries out within two hours,” says Tim. “If it doesn’t dry out, you’ll get bacteria and weed fungi growing. They’ll outcompete (the shiitake) and your growing area will turn into a horrible nightmare. That’s why misting units are great, so long as you have an automatic controller that turns them on and off, or you’re around to watch it.” 6. SOMETHING BEAT YOU TO YOUR CROP

Slugs, snails, slaters (woodlice), springtails, and other boring beetles have a far more acute nose than any grower. These pests will eat your mushrooms before you even see them.

“Quite often, people say to me, ‘I never got any mushrooms,’” says Tim. “But when I look at the log and its ends, I can see its fully colonised (with mycelium).”

Tim says look carefully at the grooves in the bark, and you’ll see signs that something has nibbled your mushroom’s minuscule pinheads (the first stage of fruiting).

“At that stage, when they’re very small, they shear it off at the surface, so the grower thinks there’s nothing there.”

Choose a spot where you can control the environment. Use netting to prevent insects, and keep the ground around the logs clear of wet, woody matter. If your logs are outside under trees, consider surrounding them with a layer of wood ash or lime to stop slugs and snails from getting to them.

7. YOUR FIRST CROP IS REALLY DISAPPOINTING

If you inoculate a variety of logs, you’ll get different results, says Tim.

“If you get a log from Tom up the road, and one from Bert over the back fence, and five from the local arborist, and they’re all of unknown character, then it can be up in the air as to what happens.”

Other times, you might do everything right, and your first flush is just a handful of mushrooms.

“The rule of thumb is the substrate will give you a certain percentage of mushrooms, between 10-25% of the wet weight of the log, depending on the tree and management,” says Tim. “If you get a small first flush, then you’d expect to get a bigger second flush, and a bigger than normal third flush because you’re going to get X kilos or X hundred grams off that amount of wood.”

Smaller first flushes often occur when a log is triggered to fruit before it’s fully colonised. A flush can be accidentally triggered if you drop a log, or get cold nights with heavy rain, followed by warm days.

A fully colonised log that’s ready to be triggered will have white ends, will be heavy, and make a dull thud sound when you tap it. Tim says it’s a good idea to tap your log regularly, so you can get used to the sound, making it easier to spot when it changes. 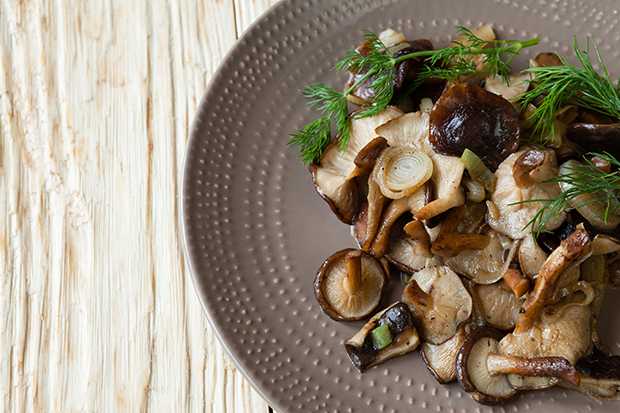 HOW TO PRESERVE YOUR SHIITAKE CROP

Logs will produce shiitake crops in autumn and spring, and you can get multiple ‘flushes’. If it’s more shiitake than you can eat, you can:
– dry them, then rehydrate them in water when you want to cook with them;
– freeze them whole or sliced in resealable bags – add them frozen to cooking, not thawed, or they go mushy.

More on mushroom growing in the November 2020 issue of NZ Lifestyle Block.