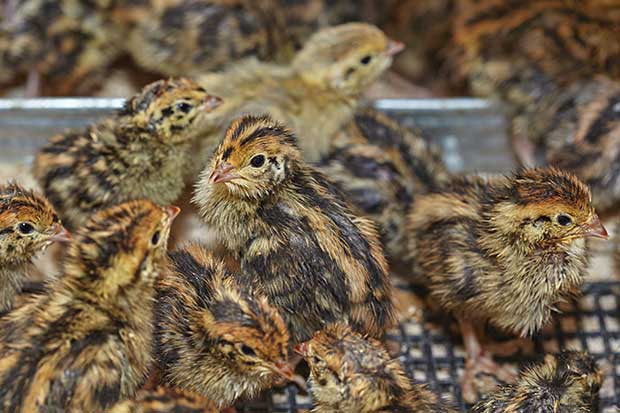 Gourmet delights wander round this lifestyle block, and its owners can’t get enough of what is turning into a delectable little bird business.

It’s ironic that Rodney Alexander and Joyce Lloyd don’t consider themselves foodies, despite being surrounded by gourmet game products which flap their way around their Nuhaka block, an hour’s drive south of Gisborne.

They used to be conventional sheep and beef farmers. Now they are suppliers of quail eggs, pigeon squabs, and Muscovy duck sous vide served with an orange sauce. 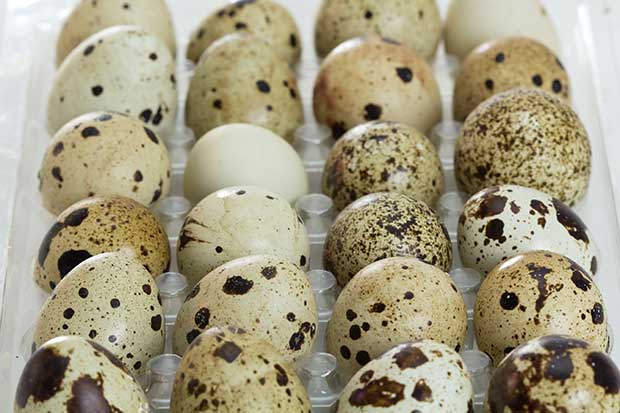 Their old farm was 1200 hectares with a supportive network of fertiliser reps, stock agents, accountants and established processors and markets.

Rodney and Joyce are now having to educate their potential market about what their products are, what they taste like and how to cook them, before they even start selling.

“We took 30 dozen quail eggs to our first market, and sold one,” says Rodney. “So I went to Briscoes and bought a pot. Ninety-nine percent of New Zealanders have never tasted a quail egg so how could I sell them one?” 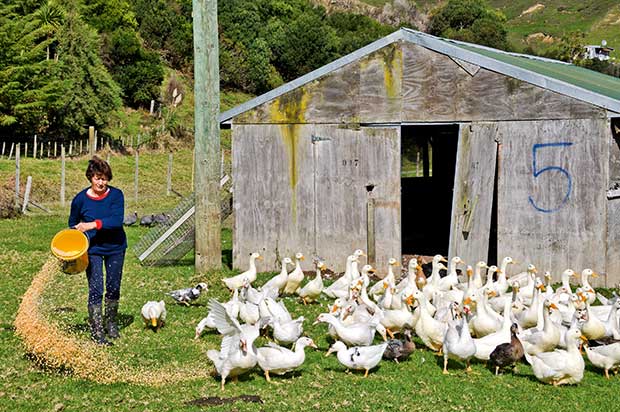 Tiny quail eggs pack a tasty nutritious punch, and are the foundation of their business which has since expanded to include a range of gourmet game bird meats and their by-products.

Going from station owner to stallholder at the local farmer’s market has been a dramatic lifestyle change. Rodney rates the learning curve as near vertical and Joyce admits the work commitment is colossal. “It never stops, there is no time off.”

They’re learning about breeding and raising game birds on a commercial scale – the first in New Zealand for many species – but also meat processing, supply chains, branding, marketing and selling.

The breeding and raising of the birds is the aspect they are most au fait with. They are both farmers who have spent a lifetime on the land, people who understand animal’s and nature’s quirks, input costs and returns, and how to raise prime food to meet the market. 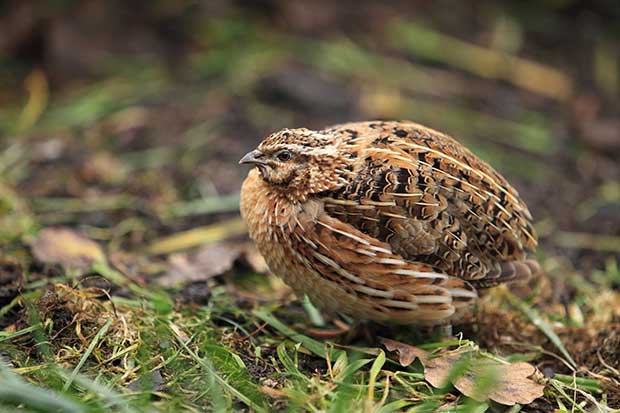 Their bible is the 54-page Quail Manual by Albert F. Marsh, the go-to reference for everything, even how to castrate 100 male quails which when penned up before processing “fight worse than bulls in the back paddock,” says Rodney.

Joyce’s refusal to assist was immaterial. Quail are very light sensitive so Rodney ‘castrated’ them by throwing a horse blanket over their pen.

WHAT IS A SQUAB? 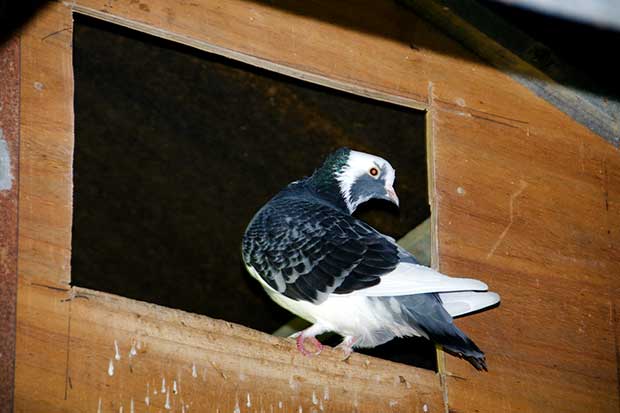 A squab is a young pigeon, 25-30 days old, which is still in the nest receiving regurgitated ‘pigeon milk’ from both parents. It can double its birth weight in a day and since it has never flown, it is plump and tender to eat.

On June 30, 2008, Rodney and Joyce handed their two farms in northern Hawke’s Bay over to Rodney’s sons and retired to a block around the corner.
Until then they had been playing with birds. “I would raise 150 pheasants and let them go, and duck shooters would come up the river and shoot them,” says Rodney. “We had some pigeons that bred up and moved into the shed. They shat on everything. The boys got sick of the bikes being covered in shit every morning so eventually shot them out.”

Once they retired – a term you apply loosely to this couple – they placed an advertisement in the AgTrader newspaper for quail and received about a dozen replies.

On a road trip which included a train ride from Auckland to Wellington and hiring a red convertible, Rodney and Joyce drove up the North Island purchasing bobwhite, Californian, Chinese and Corturnix (Japanese) quail.

They acquired a boot full of quail but, more importantly, got the opportunity to talk to bird enthusiasts and glean information. It was a Whakatane breeder who told them the Corturnix quail was the one they wanted for egg production. Keeping the ducklings out of the cold.

“Next minute, we had all these eggs,” says Joyce. “Eggs for Africa and we had to learn how to deal with them.”

The Quail Manual provided a recipe for pickled eggs which, once packed into 270ml jars, then needed a label.

That led them to Dana Kirkpatrick and the world of market research and branding. Looking back, Rodney and Joyce consider the approximately $10,000 spend on marketing a good investment. 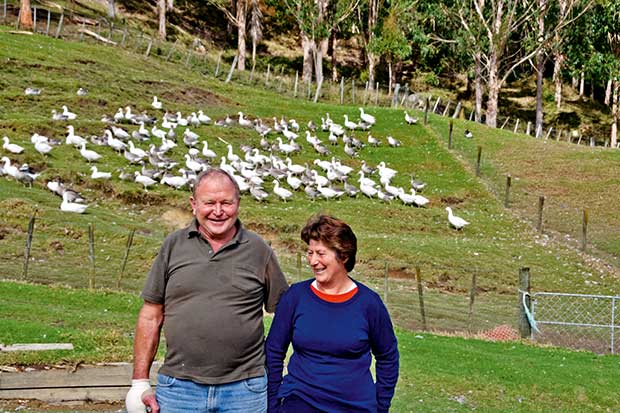 Rodney and Joyce have gone from 1200ha to 25ha but are working hard in their ‘retirement’.

“Perhaps others wouldn’t need to, but we are quite naive about computers,” says Joyce. “We wouldn’t be where we are today if we hadn’t done it.”

Rodney agrees. Marketing is their biggest effort he says, and needs to be a strong emphasis in any small enterprise.

“It was hard to spend the money up front,” he admits. “But it made us think ahead.”

Dana identified their target market: Yuppies, DINKS (double income, no kids), Foodies, and Careful Eaters (retirees with discretionary income who care about what they eat).

She worked out where they lived and shopped (Hawkes Bay and Auckland, but not their closest towns of Wairoa and Gisborne), current supply issues (varying price, inconsistent supply, damaged products), and helped them establish a brand and logo that portrayed all they were about and left room for future growth. 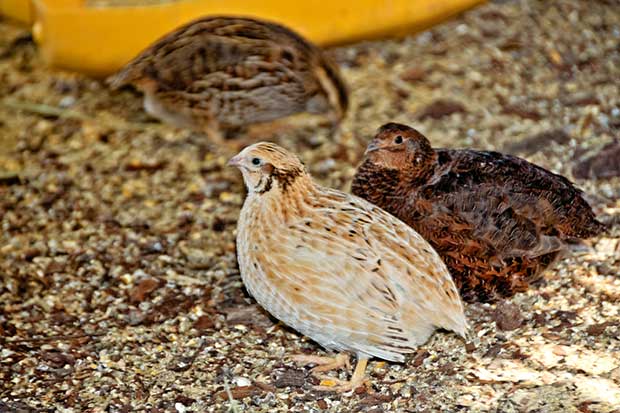 The Japanese quail (Coturnix japonica) has been domesticated since at least the 12th century and is one of the most prolific laying birds in the world. A hen matures in 6-8 weeks and can lay over 300 eggs per year.

Rodney and Joyce were sent to peruse wine labels to see what they liked in the way of colours and designs, and took an hour and half with Dana to decide on their clean green colour.

Once they settled on the name, everything fell into place. Manurau (Rodney pronounces it as two separate words) means ‘many birds’, exactly what their business is about and perfectly portraying their identity.

Now they could turn their attention to obtaining economical packaging so fresh eggs could be transported without damage, while simultaneously increasing their stock so they had plenty of supply. 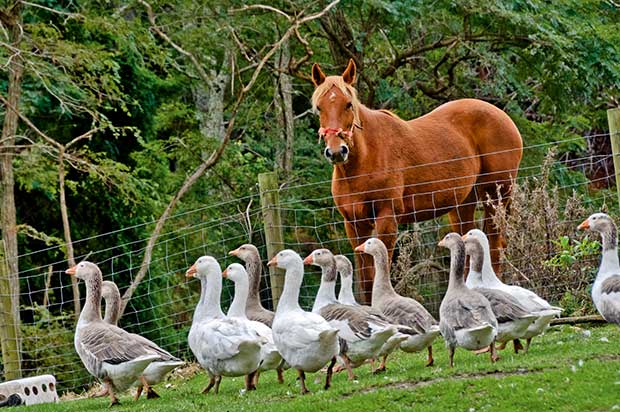 Enter the MPI (Ministry for Primary Industries), RMPs (Risk Management Plans) and other acronyms which all generated a never-ending mountain of paperwork.
“Legally in New Zealand you can own 100 laying chooks and do whatever you like with them,” says Rodney. “But once you have 101 birds you need a registered RMP.”

Expanding into meat products also brought up processing issues. Birds must be killed in a registered processing plant and the nearest one, in Gisborne, had closed due to regulations which made it uneconomic to run.

The couple now load 100 birds at 2am for a six-hour drive to a plant in Wanganui. Three hours after they arrive, the birds are all processed and on ice for the return trip home. 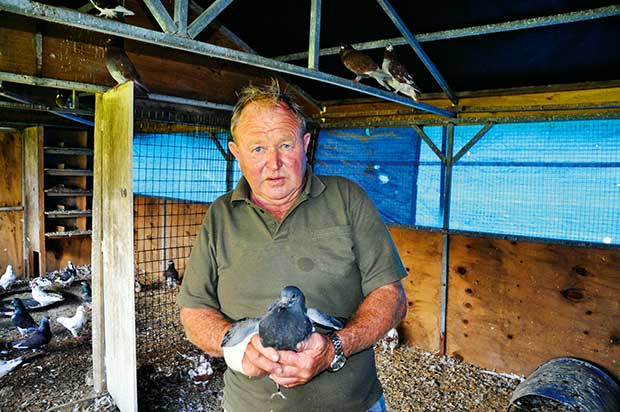 They’d do it themselves but the red tape tied them up in knots. Rodney is adamant it’s crippling small business in New Zealand. “It’s $150,000 for our own processing plant,” he says.

“We had one organised, built inside two containers, for installation in 2012 but then legislation changed. Suddenly we needed wheelchair access, toilets, a septic system… it all just got out of hand.”

While using the Wanganui plant remains cost-effective, Joyce concedes a big chunk of her life is on the road. Even the courier collection depot is 5km away.

TO MARKET, TO MARKET

A distributor in Auckland takes their fresh quail eggs (Joyce no longer has to pickle them) and the couple have gone to Plan B to sell their meat products. Plan B, says Rodney, is a van and a website. 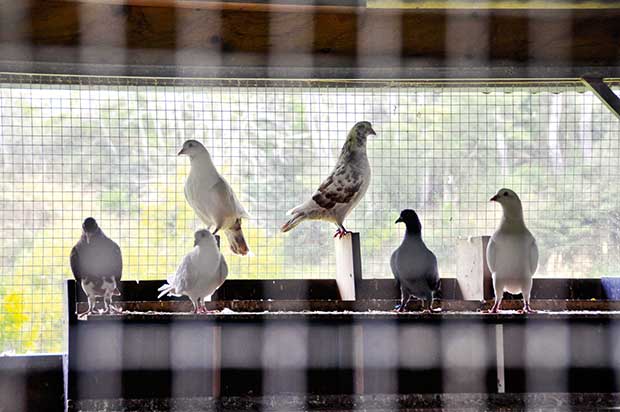 Domestic pigeons are raised for meat but Rodney would like to harvest wild ones too.

Their green caravan full of vacuum-packed gourmet game and eggs is taken to farmer’s markets in Hawkes Bay, and they sell via the website to customers and restaurants throughout New Zealand.

But balancing supply and demand is literally the proverbial chicken and egg situation. To have consistent supply means they need to over-produce.

Currently they are collecting 80-100 dozen quail eggs per week (that’s close to 1000 eggs) and while their distributors first order was for five geese, 400 or so gaggled and honked at us in the paddock above the driveway. These will hopefully be enough to meet the growing demand for the 2015 season.

All of the species they raise have their individual idiosyncrasies, but generally birds are hatched in spring and slaughtered in autumn. That six months
of farming is Rodney’s forte.

“We have full control of the fattening process. We know exactly what they eat (a mix of maize, high-protein poultry feed and free-range grass) and slaughter them once they are through their pin-feather stage.”

Breeding them is another matter and one Rodney would like to delegate.

“I’d need nine different studs, keeping the best of the best each time.”

With the exception of the pekin duck, genetics in New Zealand are lacking for good-sized meat birds. Evolution hasn’t produced the desired size so Rodney sees the need for selective breeding.

They currently source pheasants, turkeys, day-old guinea fowl keets and quail chicks from breeders. Local children are paid $5 in spring for goslings harvested from the wild. 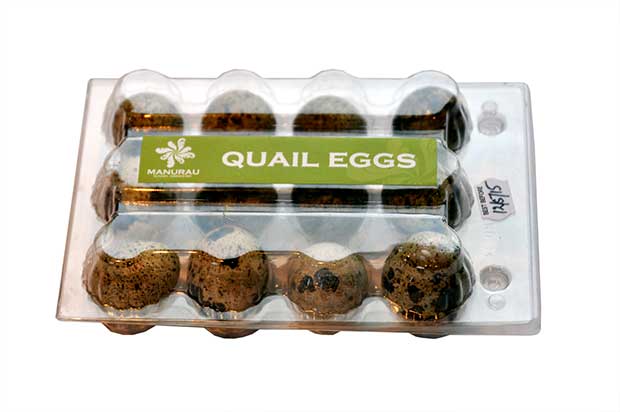 Pigeons are in short supply and Rodney is working through the paperwork to get permission to catch the pesky ones in cities that annoy urban dwellers. However, there is no precedent for wild pigeon in the food chain so issues concerning food safety and animal welfare need to be worked through with MPI.

Delivery of live chicks is an issue as the regular courier will not carry them, but Air NZ will. It means they have the bizarre situation where they cannot get chicks couriered from Tauranga, but can get them flown up from Ashburton.

Rodney is keen to hear from anyone who would be interested in breeding birds, particularly chukka and red leg partridge which are not yet on their menu. Ultimately, he sees a whole new industry of suppliers forming. 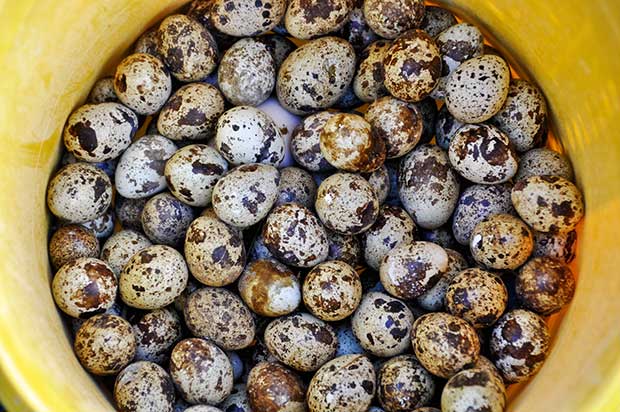 “We want to be able to supply as many as we can. If we could get hold of moa we’d be selling that too.”

And while Rodney acknowledges the economies of scale, it is quality more than quantity they are focusing on.

“Unlike the poultry industry which is built on volume, we are small, niche and high quality.”

WHAT’S ON THE MENU

Manurau provides a wide range of game birds and eggs, including:

THE BIRD THAT DOES EVERYTHING 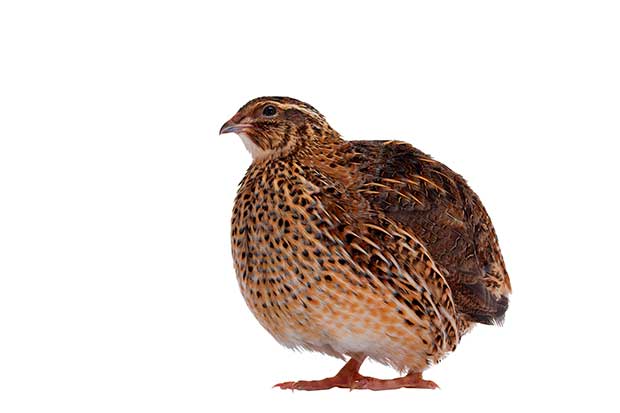 Quail eggs are popular in Chinese medicine where healers claim they help with an array of illnesses including asthma and hayfever, increase sexual appetite and stimulate brain function. 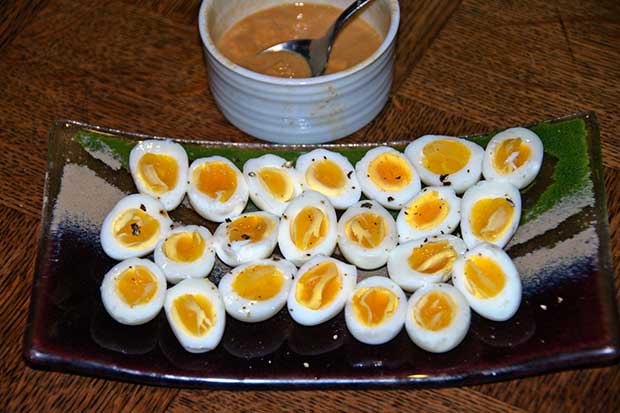 The best way to sell quail eggs? Show people what to do with them.

In comparison to a chicken egg, quail eggs have: