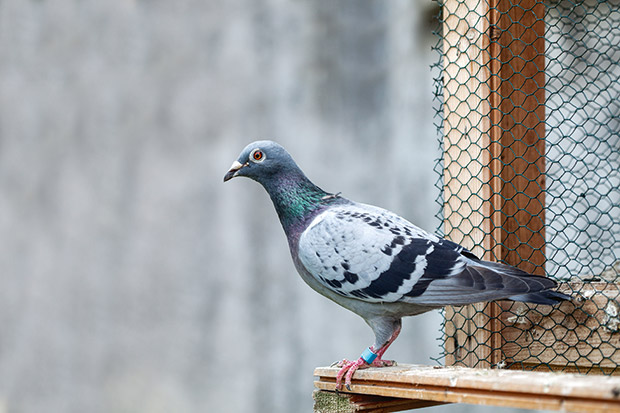 Suppose a pigeon is released into the sky for a 1300-kilometre mission. Though uncommon, it’s possible. It might fly from Invercargill to Auckland in a single day. What a feat that would be.

Craig Gray, a Tūākau sheep and beef farmer, knows such a mission is conceivable. He’s seen it with his own eyes. “Pigeons can do unbelievable things,” he says. “I once came home and found one of my Invercargill race pigeons waiting in the loft after flying for 12 or 13 hours.”

Craig, the president of the Auckland Racing Pigeon Federation, has been racing pigeons for 56 years. He is among many who prime their birds with training and protein-rich feed in the hopes that when the racing season begins, theirs will be the fastest of the lot.

“It’s the same as preparing any athlete, whether it’s a human or racehorse. You rear them to the best of your ability,” he says. 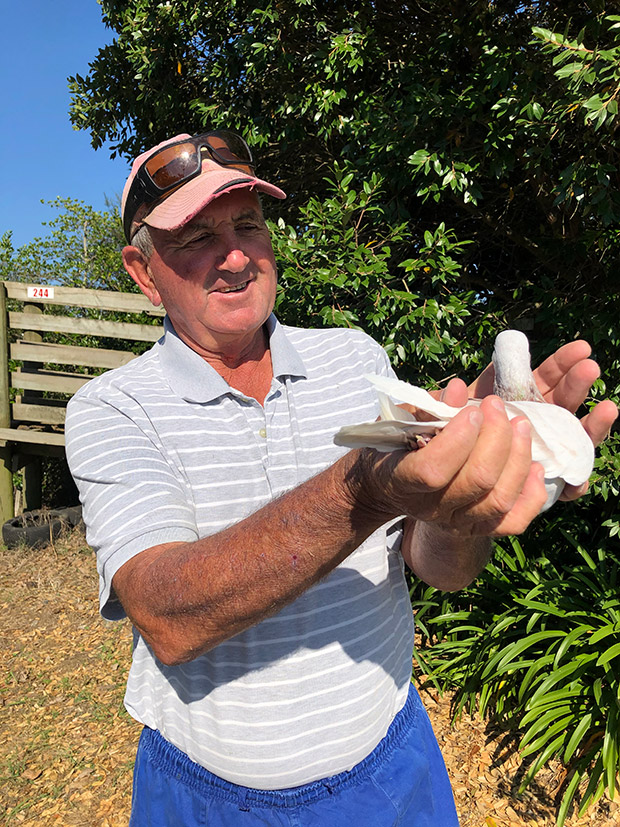 Craig with one of his racing pigeons.

As a boy, Craig worked on a poultry farm; and his boss’ son gave him four racing pigeons as a gift. “When I took them home, I was told there was nowhere to keep them. But the next day, Dad helped me build a small loft,” he says. Craig won the fourth race he entered and has bred pigeons since.

The formula for success is inexact, but there are a few golden rules. Birds are bred for endurance (“winners breed winners”, says Craig) and begin navigating the skies shortly after learning to fly. Craig lets his young birds orientate themselves on his property, increasing the flying time gradually before he releases them a short distance from the loft for training. While cocks and hens can both race, mated cocks are a tad more — well — eager to return home in haste.

“You take the hen away so the cock is racing for a promise that the hen will be there when he returns,” says Craig. “That’s the nice way of putting it.”

Training pigeons for sport has a long history in New Zealand, with the first flying club established in 1876. By the end of the 19th century, Great Barrier Island was the first place in New Zealand to receive regular airmail — by pigeon, of course. Two competing “pigeon posts” sent letters to the isolated island for nearly a decade.

“Pigeons essentially have a GPS in their head,” says Craig. “Racing is simply a way of harnessing the migratory instinct of birds.” These days, fanciers have several modern gadgets at their disposal if they are willing to invest. The most common accessory is a life ring, strapped around a pigeon’s leg, containing a microchip that fanciers scan to record the bird’s time and distance after a race. This allows them to calculate the bird’s average velocity, which makes a pigeon a winner rather than time in the air.

Winners are not always what they seem, says Craig. He used to breed larger birds but has since settled on a medium size, finding they are consistently fast flyers. None of his 250 birds has a name, but each has its own personality and place on the pecking order. “One of the best I had never needed to be at the top, but he won more races than the rest put together. He was just a quiet, ho-hum pigeon that didn’t start any problems,” says Craig.

It’s a whirlwind, quite literally, when a race begins. Hundreds (up to thousands) of birds are released simultaneously, starting anywhere from Pirongia in the Waikato to Dunedin. Depending on wind conditions, pigeons can fly between 80 kilometres to 120 kilometres per hour, taking few breaks where needed. “It’s all about hydration. Birds may dip down to a creek or a lake, take a drink in less than 10 seconds and continue,” says Craig.

More stories you might like:
The ultimate guide for a sick chook: Vaccinated flocks, dealing with new birds and the case study of a limping hen

Minutes become hours in this long-haul race. Craig scans the sky, clock ticking, as he waits for his athlete to take its signature nosedive towards his loft in Tūākau. He is filled with coach-like pride upon the pigeon’s return.

“Whether the bird comes in first place or last — it doesn’t matter to me. I get joy from preparing this athlete, which has just flown for five or six hours, and seeing it come home. It’s quite a thrill.” There are at least 36 pigeon racing clubs in New Zealand, each typically made up of six to 10 members. During the racing season, each club — or club federation, in Craig’s case — mass-transports members’ birds in a shared truck to the race starting point. After being released (or “liberated” in fancier speak) en masse, each pigeon flies to its home loft to finish.

Racing pigeons are strapped with a life ring as chicks; this helps fanciers measure speed, distance and — what wins a race — average velocity. “A lot of races are won within five or six seconds. I could tell you of a hundred races where a winner has won by one second,” says Craig.