How to cook with a tagine


The accidental inheritance of a tagine has meant more food experiments for Jenny and Chef Ken.

We first came across tagines when our keen gardener/cook/preserving friend Mary gave us a gift of preserved lemons. The accompanying note said, “Use in tagines – fish, chicken or lamb”. She knew my husband Ken well enough to know his interest would be piqued.
“A tagine? What’s that?”
For a start we didn’t even have a tagine dish. The lemons waited expectantly in their jar on the shelf. Months passed.

Then, serendipidously, some newly married friends asked us to look after a wedding gift which was too heavy to take to England. Their beautiful tagine dish waited decoratively on our sideboard, until another couple of young friends, just returned from travels in North Africa, noticed it and described their experience of eating tagine in Morocco. That decided what was on the menu.

The preserved lemons, the tagine dish, and the description of the taste and experience were put together with some good New Zealand lamb to create a unique taste experience – we were hooked.

The complex flavours were quite unlike any other and the dish itself gave a sense of occasion.

Several experiments over the next three years, followed by mid-dinner analysis of the flavours, herbs and spices, and the foodie of the pair reckons Ken has ‘got it pretty good’, accurately reflecting her memory of her Moroccan dining experience.

As for the bride and groom, they get the experience of their wedding gift every time they come home. 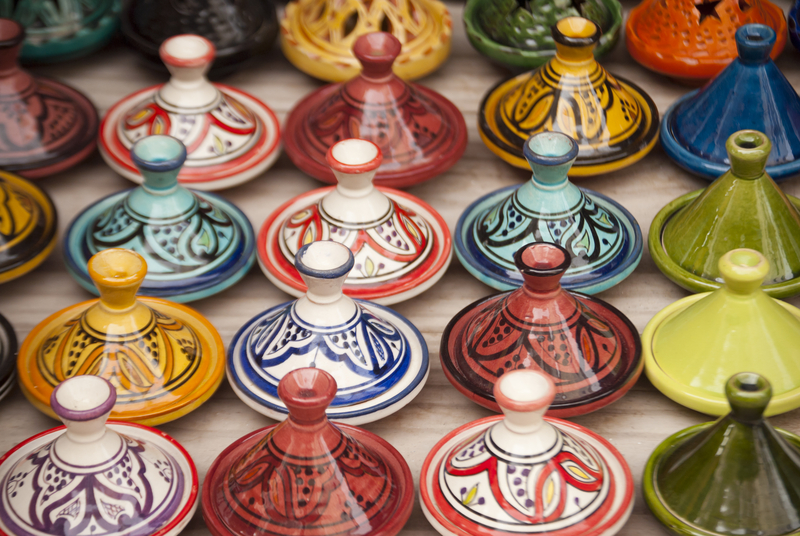 TASTE OF MOROCCO
Tagines are the classic Moroccan dish traditionally cooked over coals. They originated with the Berber people of western North Africa (Morocco, Algeria etc) where the cooking style is ideally suited to a land of water scarcity. The conical lid is cleverly constructed to capture the steam, allowing it to condense and return to the dish, resulting in very little moisture loss.

Moroccan cuisine has been formed by many different culinary influences through the ebb and flow of colonising powers: the Arabs, the Moors, the Jewish diaspora, the Ottoman Empire, and the French, all of whom left their flavour on the taste we now think of as Moroccan.

Olives, citrus, dried fruit and nuts, preserved lemons and the range of herbs and spices used are just some of the culinary legacy that these visitors to North Africa left behind.

Since our first experiments with tagines we have discovered that they can be used for a wide variety of dishes. Moroccan meats are traditionally lamb, goat and chicken, and these are often used with beans and pulses.
But tagine-style cooking can be used for any meat or vegetable dish.

They are a useful way to cook dried beans, and suitable for set-and-forget slow cooking. Just put it put on in the morning and leave to bring out a delicious meal of complex flavours to impress dinner guests when you get home. The better temperature control of the oven is more useful than the traditional hot coals or the stove top.

Tagines are ideal winter fare as the flavours are hearty and stimulating, but you don’t have to wait for a tagine dish to arrive like we did. Mary says a covered casserole dish would work well instead.

Preheat the oven to 220°C. Slice the onions and mushrooms and spread them evenly over the base of the tagine. Peel and crush or finely chop the garlic, grind the cumin and coriander seeds.

Mix them all together with the cinnamon, 1 tsp salt and a generous grinding of black pepper. Remove any excess moisture from the chicken and drain the cavity.

Stuff some into any remaining space in the cavity, and spread some on top of the onions and mushrooms.

Place the chicken on top of the fruit etc. If the lid of the tagine is likely to contact the chicken (as mine did), lightly grease the inside of the lid with oil or butter. Add enough water (and the remaining salt) to just cover the onions and fruit etc – the chicken should be just above the water.

Cover and return to the hot oven for 20 minutes, before turning the oven down to about 140°C. Leave to slow cook for about 2 hours. Before serving, carefully (it will fall apart if you don’t support it) transfer the chicken to a plate and place in the warm oven while you drain any excess fat off from the tagine.

Mix the flour and a little cold water to a paste, then add liquid from the tagine until it is pourable. With the tagine on the oven top on a low heat, mix the flour into the tagine to make a sauce or gravy.

Return the chicken to the tagine and pour some of the thickened sauce over the chicken before covering and setting aside in the warm oven until ready to serve.

Bring covered to the table with guests seated, then remove the lid with a flourish to reveal the chicken and impress your guests! We get our lamb with most of the fat trimmed off – our local butcher does this on request- which results in about 2.2 kg of meat in one piece with a hole where the bone used to be.

I cut it in two to fit it better in the tagine. Pre-heat the oven to 230°C. Slice the onions and mushrooms and lay enough on the bottom of the tagine dish to cover the bottom – these act to keep the meat from direct contact with the dish.

Grind the cumin and coriander seeds, finely chop the rosemary and oregano leaves, chop or crush the garlic. In the absence of any preserved lemons (see next month’s column), peel the lemon with a zester or potato peeler, trying not to get any pith, and finely chop the peel.

Combine all these with 1 tsp of salt and a generous grinding of black pepper. Rub the combined herbs and spices over the meat, including in the hole where the bone was. Allow any excess to fall into the tagine dish. Halve or quarter the tomatoes, depending on size, and halve the dried fruit.

Arrange the meat on top of the onions and mushrooms and surround with the dried fruit and tomatoes in the tagine dish. Add enough water to cover the mushrooms, onions and part-cover the dried fruit. Sprinkle the exposed meat with half the brown sugar.

More stories you might like:
New online tool HomeFit allows New Zealanders to test how warm, dry and safe their houses are

Cover and place in the oven. Cook for 30 minutes before turning the meat, sprinkling the newly exposed meat with the rest of the brown sugar, and turning the oven down to 150°C.

Cook, covered, for a further 2 hours, turning the meat occasionally. If time permits, cook for longer (up to 4 hours) but turn the oven down to 140 after the first 2 hours.

When ready to dine, prepare the couscous following the directions on the packet, stirring in the chopped parsley and chives, and the juice of the lemon once the water has been absorbed.

TO SERVE
Bring the tagine, covered by the lid, to the table and reveal to the gathered guests with great fanfare.

Traditionally, the meat is broken apart with the serving spoon, but I found it less messy, and more impressive, to ‘slice’ the meat in the dish at the table, although it tends to break apart under the knife.

I served it with stir-fried summer green vegetables with side dishes of sour cream and avocado. This dish served nine people, with most having seconds.

Put the beans, 1 tsp salt and the chopped garlic in the tagine with 6 cups of water – the beans should be covered with water to twice their depth.

Place the covered tagine in a hot oven (220°C) for 30 minutes or so, then reduce to about 120°C for a further couple of hours. Most of the water should be absorbed by the beans.

Remove two thirds of the cooked beans and store in the fridge or freezer for other dishes or other times. Halve the almonds and dried fruit, grind the coriander and cumin seeds, chop the onion, mushrooms and peppers and add with the beef, tomato puree and salt to the tagine.

Stir well to break up the mince. This can be done with the tagine on the stovetop at a low heat while preparing and adding each in turn. Turn the heat up to bring the dish to a gentle simmer, then cover and transfer the tagine to the oven, still at 120-140°C.

Leave to cook slowly and gently for at least two hours, but all day at the lower setting if that is more convenient.

When ready to serve, stir in the chopped parsley/coriander leaves and take covered to the table. Serve with avocado and sour cream as side dishes.