How to grow flowers all year: Blueskin Nurseries’ Sally Brown shares her secrets to a year-round cutting garden 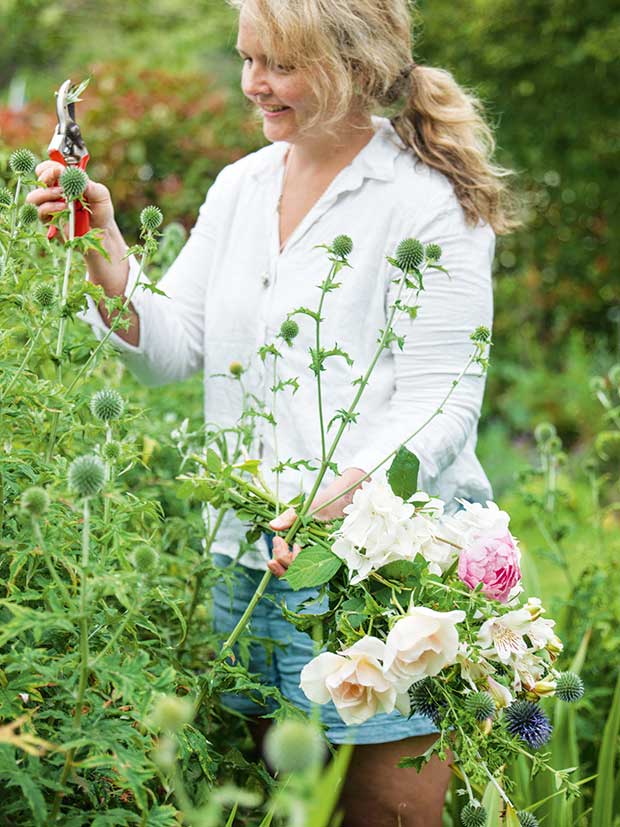 A vase of fresh flowers is a simple way to bring joy into your home. Expert gardener Sally Brown shares her tips on how to grow cutting blooms all year-round.

Nothing makes Blueskin Nurseries‘ owner Sally Brown happier than pottering about in her large garden on the Otago coast, secateurs in hand, gathering flowers and branches for her home or as gifts.

Sally spends her days working in her family’s large, busy nursery and retail garden centre, and you’d think she’d get enough of flowers there. Not at all. When Sally leaves work for the two-minute walk round the corner to her home, a relocated Dunedin tram, she looks forward to seeing her garden and taking some of it inside to enjoy.

“I’ve always loved picking flowers even as a tiny child. I often do flowers for my friends, sometimes for special occasions and sometimes just because I feel like it, or I am thinking of them,” she says. 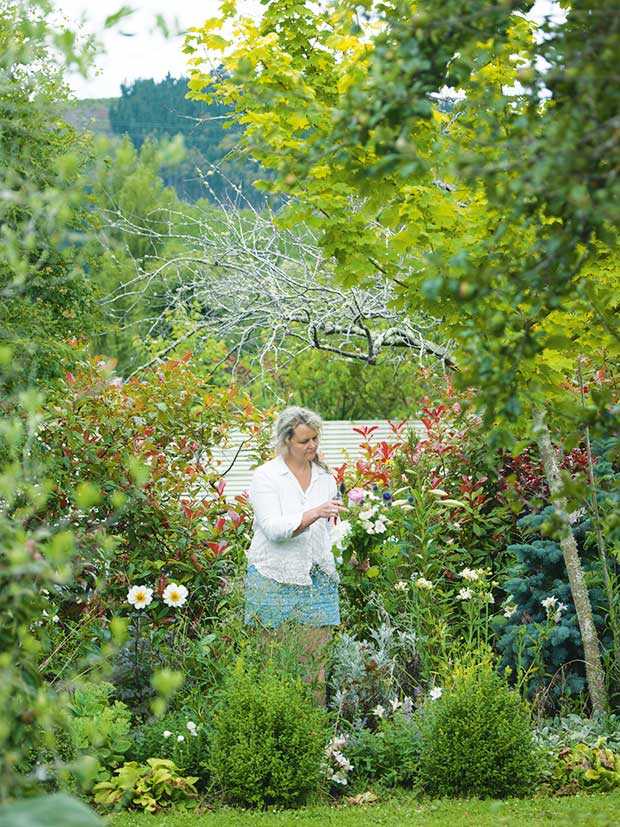 Sally’s garden is planned like a colour wheel so that something is in bloom every season. The plantswoman and landscape architect loves to pick blooms from the madly-flowering beds in her half-hectare garden.

Her garden has something to pick every day of the year, and the trick to it lies in the planning. First, says Sally, you must make some important decisions:

Tip 1: Sally’s says it’s important to start small. “Give yourself a taste of success and then build out from that. Small can be very effective, and doing it well is more important than committing to too much space and ending up with a mess.”

Tip 2: Timing is the next factor. It takes a year to plan and execute a garden design. A general rule for perennials and bulbs is six months from planting to picking. 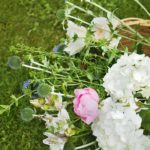 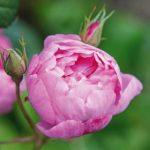 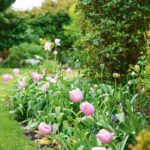 The Pink Diamond tulip is a spring star of Sally’s garden. 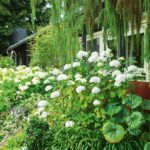 Hydrangea macrophylla and Hydrangea arborescens give a bright white display on the shady side of Sally’s home.

“Think of it this way,” says Sally. “If you don’t have your bulbs in the ground by the end of May, you won’t be picking daffodils and tulips in spring. Same for your autumn and winter shrubs and flowers; they must be in by mid-summer.”

Tip 3: Once you have a plan in place, and the plot is ready, the next important aspect is structure.

Put the tallest plants at the back. The shrubs (or trees if you have enough space) go at the very back and then everything else in descending order of height with the lowest at the front. 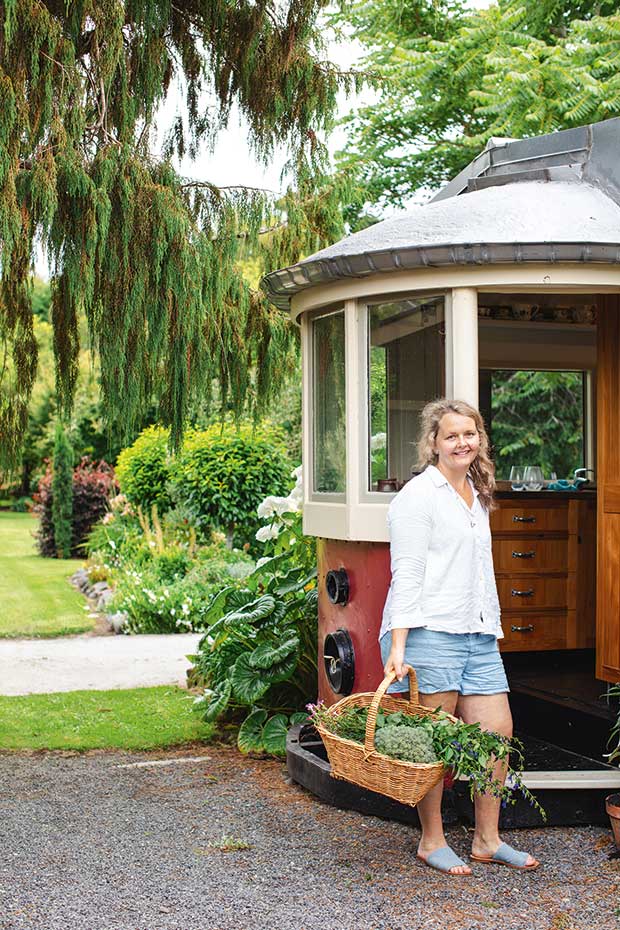 Getting this right is crucial, and once you’ve got the large shrubs in, you can add perennials and bulbs through the seasons.  Sally warns that a picking garden is not an easy-care garden.

“Planting a garden for picking is a labour of love,” says Sally. “But I wouldn’t have it any other way.” 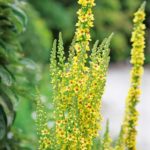 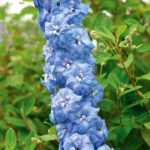 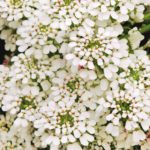 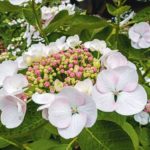 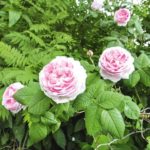 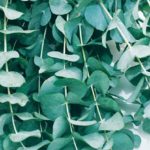 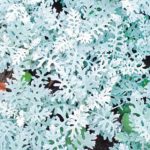 Shrubs
These include both hardy and spring-flowering varieties such as the deciduous or semi-deciduous mock orange, Philadelphus. She likes the variety Virginal for its scented flowers and because it does not get too big.

Forsythia intermedia (or border forsythia) is another useful deciduous shrub. In spring, its branches are covered in bright yellow flowers; in autumn its leaves turn a yellow-brown colour. Viburnum is the third of her must-have shrubs, and she recommends the variety Burkwoodii.

“It is a beautiful shrub with scented, pompom-like flowers and great foliage and then berries in autumn.”

Roses
David Austin roses are favourite structural plants, and she has more than 40 in her garden. Graham Thomas (yellow) and the scented Golden Celebration are her picks for yellows. 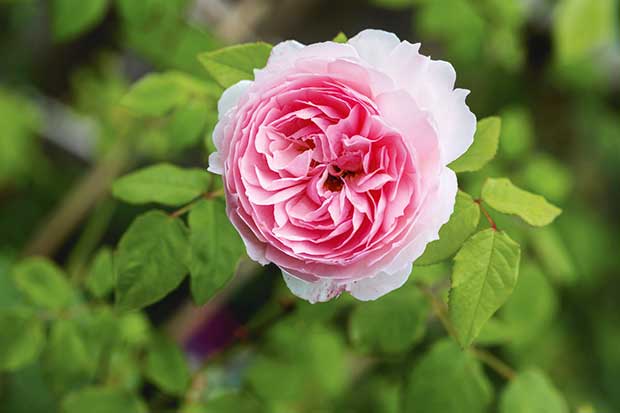 Others include Mary Rose (an old-fashioned, scented pink), Lady of Shallot (burnt orange), Wisley 2008 (a tall and intricately petalled pink bloom), and The Wedgewood Rose, a vigorous pink climber.

Hydrangeas
These hit the jackpot with excellent form, foliage and flowers, and for being very easy care.

“They are hard to beat,” she says. 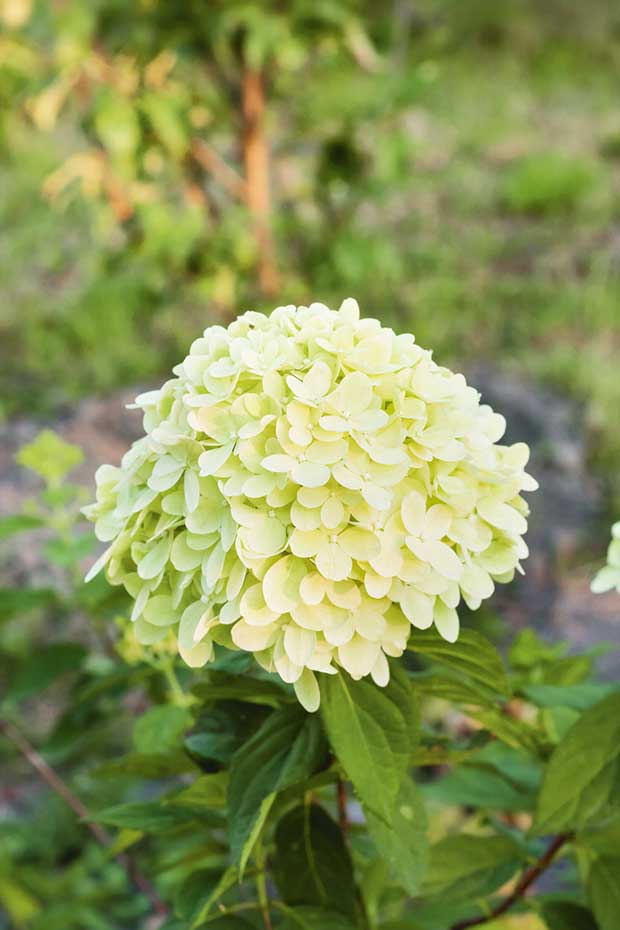 “I love Merveille Sanguine (red and purple flowers) and the popular cream green varieties Annabelle and Limelight. As a Hydrangea paniculata, Limelight has strong straight stems and is good to use massed in a vase. It’s got a great presence due to its straight stems and doesn’t need any other flowers or greenery with it. I also love the Hydrangea lace cap Libelle which will last for weeks in a vase.”

More stories you might like:
From lawyer to pastry chef: Why Sarah Jhean left her legal career in Paris for the sweet life in Hastings

Delphiniums
These should be planted near the back of the garden they are among the tallest of the perennials. It is helpful to provide support for these giants.

Perennials
After the tall, structural plants are in place, the ‘fill-in’ perennials can be planted into the spaces left, plus salvias of every different shape and size, echinacea, southern favourite peony roses, dahlias, and Iberis sempervirens Candytuft.

Bulbs
“Spring kicks off the season with my favourite bulbs; snowdrops, bluebells, and tulips. I have hundreds of the tulip Pink Diamond, and I love having white tulips flowering in the shady areas. They give such a burst of light. I have masses of daffodils, honesty, primula, oriental poppies, and bearded iris.”

Foliage
For foliage, she recommends the Cineraria Silverdust, also known as silver ragwort, for its striking presence in the garden and vase. It grows to small shrub height.

Another terrific foliage plant – more of a small tree – is the Eucalyptus Baby Blue which she keeps trimmed into a 1m x 1m shape.

She also loves miscanthus, which has a toitoi-like head but is somewhat smaller and upright. Cotinus, or smoke bush, is a largish shrub but provides good spring foliage, and so does Myrtus Red Dragon. 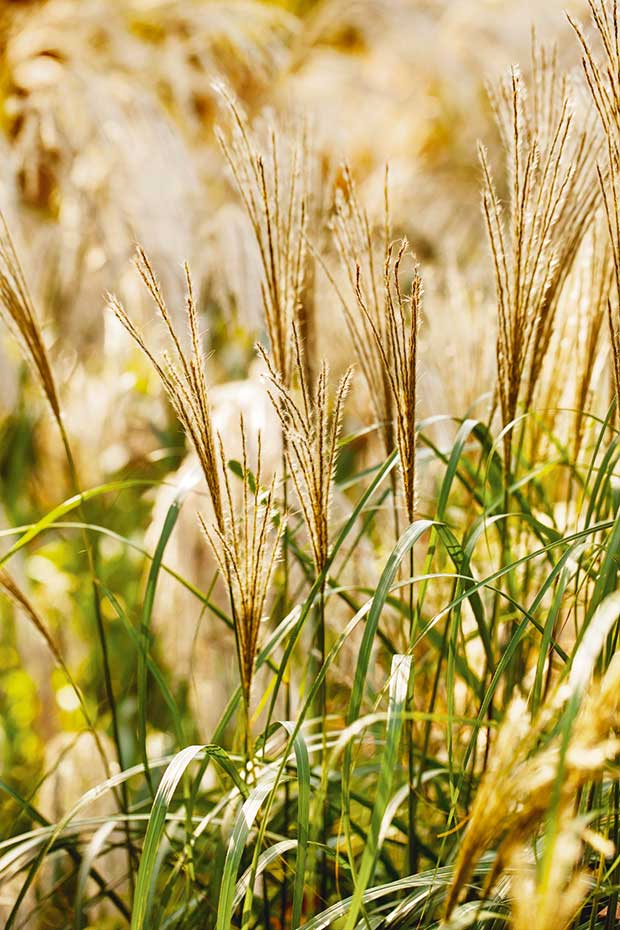 Berberis has a place in a picking garden for its autumn colour despite its nasty prickles. Use a columnar form which doesn’t take too much space, such as Berberis Maria which, as a bonus, has luminous yellow leaves throughout the seasons. Sally says it’s as though light is shining from within the bush.

She prizes Physocarpus Shady Lady for its useful red foliage both in the garden and vase. 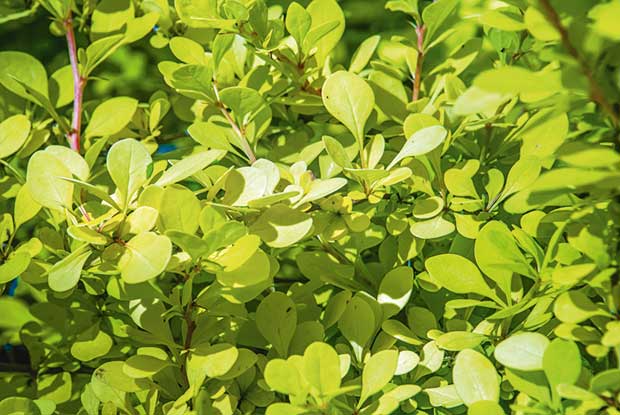 “One of my favourite plants (I know, I know! I have so many favourites, but I really do), is the Cornus alba which, in winter has striking long, straight red stems and can be massed into a vase for a very sculptural look that will last for months.”

Sally says to note Cornus alba is “rather invasive and needs to have space.”

The alliums
Another in Sally’s list of ‘treat’ plants is anything from the ornamental Allium family. However, they can be hard to find so occasionally she leaves ordinary old spring onions
to flower. 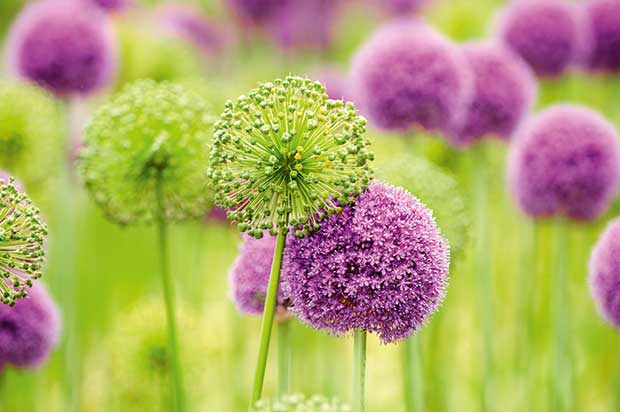 “They have a marvellously structured head as do chives and plain onions which are also part of the allium family. These flowers are also sought-after by bees. I think all ornamental alliums are just a treat. I see at the Chelsea Flower Show this year they are all the rage. That’s where I first saw them, years ago, and I’ve just had to have them in my garden ever since.”

HOW TO SAVE MONEY IN A CUT FLOWER GARDEN

Sow annuals yourself. After a visit to Perch Hill, the East Anglia property owned by well-known UK-writer and plantswoman Sarah Raven, Sally was inspired to start a cut-flower trial bed. Structure is important. Sally positions trees and shrubs at the back, flowering borders in front. Here, pink roses, salvias, delphiniums, and petunias lead the eye to the blue ball in the background.

“At Perch Hill, there was every flower you can imagine, flowering in the trial beds. I was inspired, and I brought home seeds and set about creating my own. There is nothing more rewarding than growing flowers from seed for the first time.”

• get several seed trays and fill them with good quality seed raising mix. “It makes the world of difference – I use Daltons.”
• sow in late winter to plant out in spring.
• some seeds can be sown directly into the ground but check the packet and assess based on your climate.

“Other perennials worth sowing are Achillea (yarrow) which flowers for months and is great in a vase, Echinops (a globe thistle), Eryngium (sea holly), Verbena bonariensis (purpletop vervain), and Scabiosa (pincushion flower) Starball.

“My cutting garden is not complete without sowing seeds for my cut flowers as this is a very cost-effective way to produce lots of annuals of one variety. 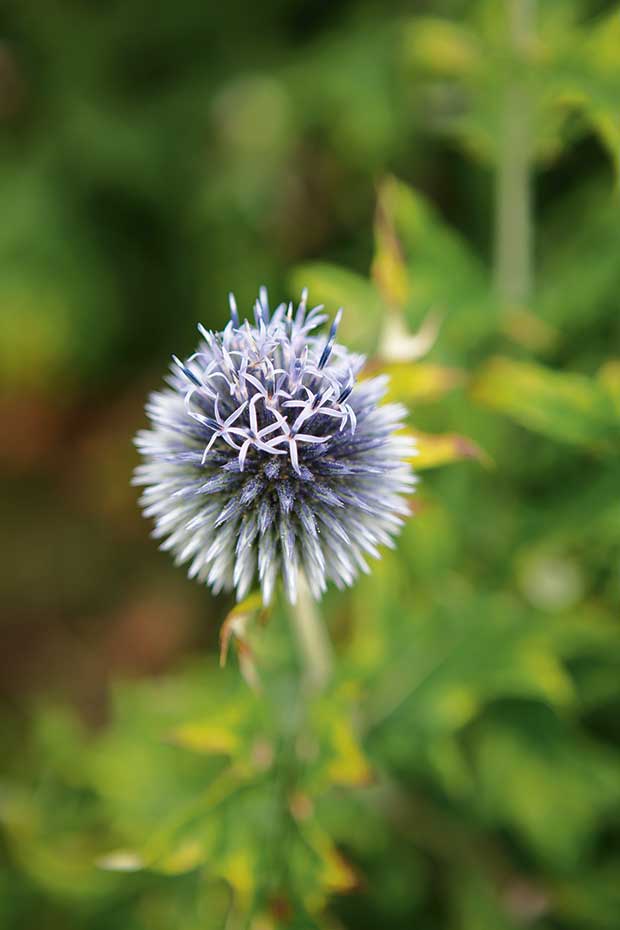 “I get so excited to get out into my garden each day and see what has surfaced or if a bud has burst. I get the same thrill at work from the arrival of new plants in the garden centre or from a customer coming in to share a piece of knowledge with me.

“The best thing about gardening is that every day I learn something new, and I am constantly challenged. My knowledge will forever grow, and successes and failures will happen year, in year out.”

Sally says the most valuable time spent in the garden is in autumn. Tidying, clipping, weeding and spreading a thick layer of mulch always pays off for the seasons ahead. 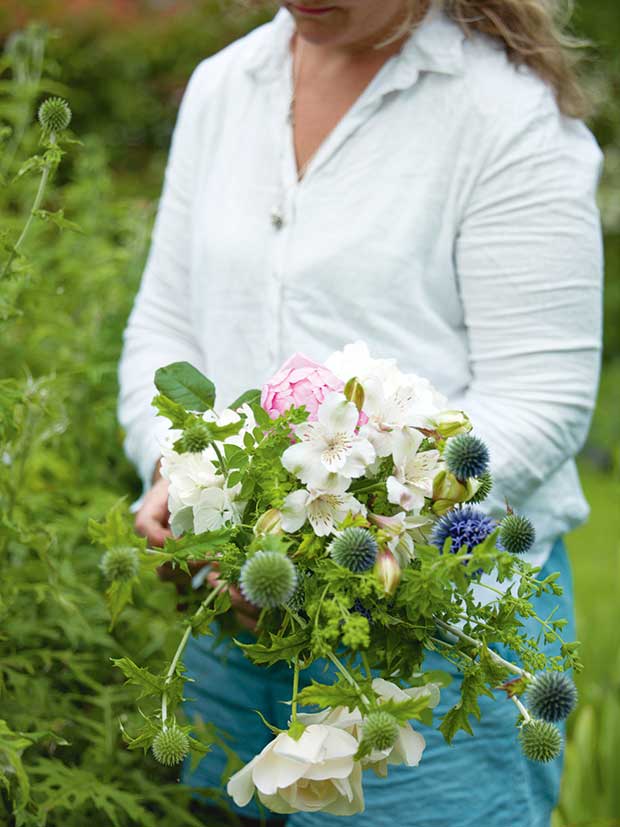 “It’s like tucking my flowers and plants away for winter and planting out the new delights for spring.”