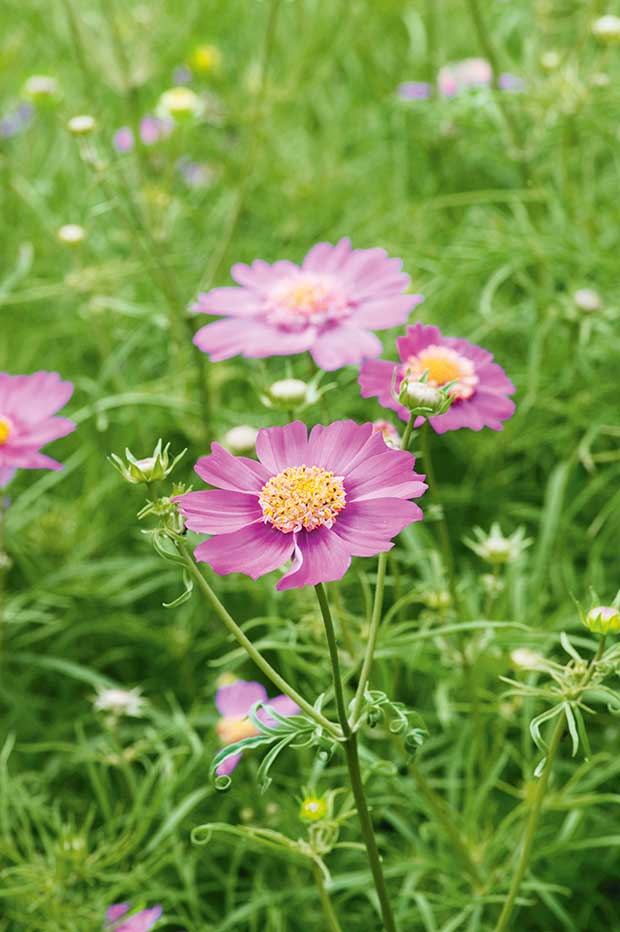 You support local business when you buy plants and seeds in NZ, but what happens when something you want to grow isn’t here?

This is Cosmos bipinnatus Pink Popsocks, a powder puff-centred cosmos similar to an anemone dahlia. I rather like the look of it, but as far as I know, it’s not in New Zealand.

It begged the question: could I import some seeds?

Ministry for Primary Fisheries (MPI) spokesperson Sid Pickering says yes, as long as the seed packet is labelled with the scientific name.

“Cosmos bipinnatus seeds can be imported with the general ‘basic’ import biosecurity requirements.”

A thorough inspection will still be required on arrival in New Zealand.

Austin Walls is the owner of Owairaka Seeds in Auckland and specialises in growing unusual plants. He often imports flower seeds and says the process is fairly straightforward.

“The seeds have to be on the ‘allowed in’ MPI database list maintained by MPI. Seeds also have to be clean and free from bugs, and properly packaged. They also have to be correctly labelled with the genus and species. I import from several different sources, in Britain, Europe and the US.”

So Cosmos bipinnatus is ok to import and I can go ahead and order Pink Popsocks when I want to.

HOW TO CHECK IF YOUR SEED IS APPROVED

To find out if a plant is approved for importing by MPI, you need to consult the Plant Biosecurity Index (PBI).

“Only permitted species listed in the Plant Biosecurity Index are able to be imported into New Zealand as either seed or nursery stock,” says Sid.

The PBI can be viewed online. Just pop in the genus and/or species, and if it’s on the list it will appear (see example below).

If the entry is not in the index or says ‘entry prohibited’ or ‘requires assessment’ you cannot import it. 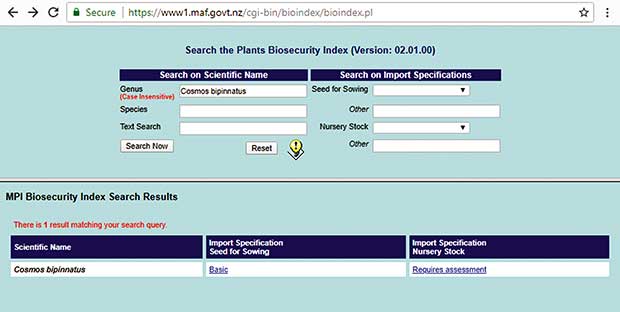 • You can enter the scientific name for the seed, in this case, Cosmos bipinnatus, or do a text search.

• You can also search using other options. For example, choose ‘basic’ from this menu and hit search and it will bring up a list of all seeds that are allowed and fall under the ‘basic’ criteria.

• Once you search, the database brings up its import specification. This is where it will say ‘entry prohibited’ if it’s not allowed in. In this case it’s ‘basic’ which means it is.

• There are separate instructions if you are bringing it in for a nursery. 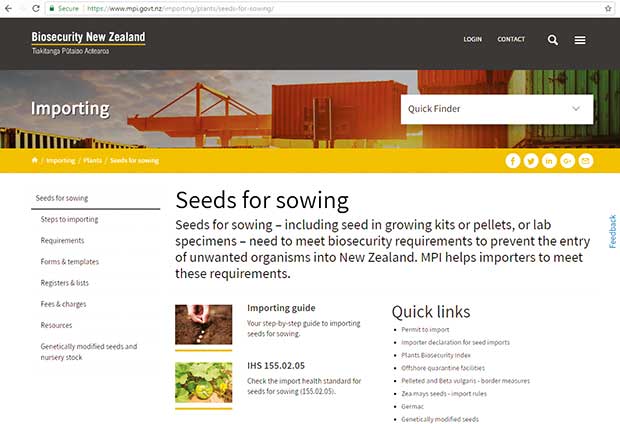 Click on the word ‘basic’ in the Plant Biosecurity Index (PBI) when you do a search and it takes you to the Seeds for Sowing page on the MPI website.
From there, click on the Importing Guide and read further.

Most importantly you need to download the ‘HIS for Importing Seed for Sowing’ pdf (155.02.05).  DOWNLOAD THE Seeds-for-Sowing-IHS PDF HERE

This is a rather long document – 139 pages – but for seeds termed ‘basic’ you just need to read through Part 1.

Where the PBI indicates ‘see 155.02.05 under genus x’, you will need to follow the general requirements in Part 1, find the section the Index mentions, and then make sure you follow those requirements too.

For example, Petunia x hybrid in the PBI says ‘see 155.02.05 under Petunia’. You’ll need to read through Part 2 of ‘HIS for Importing Seed for Sowing’ under Petunia, which sets out the specific phytosanitary requirements that must be met in addition to Part 1. 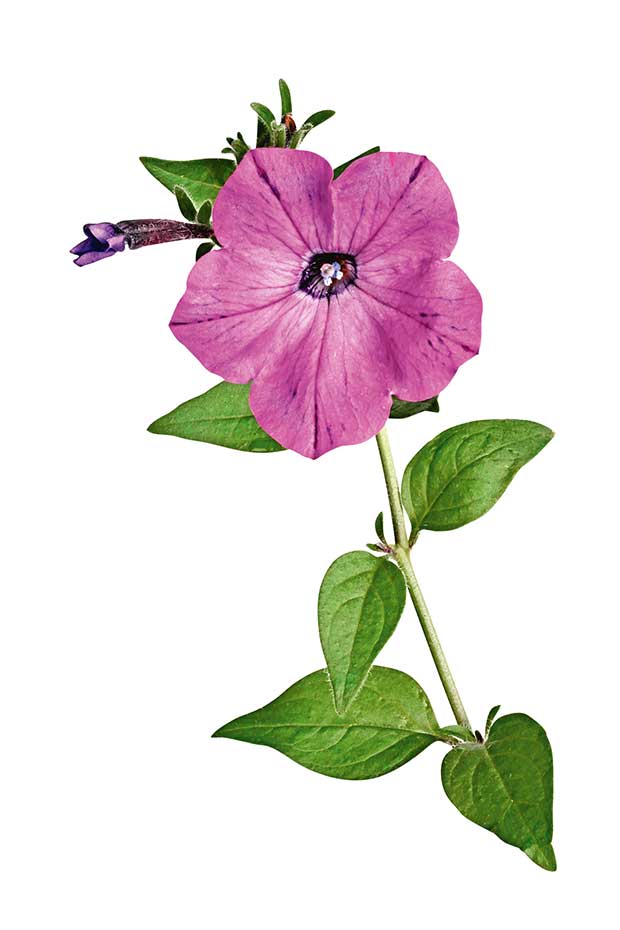 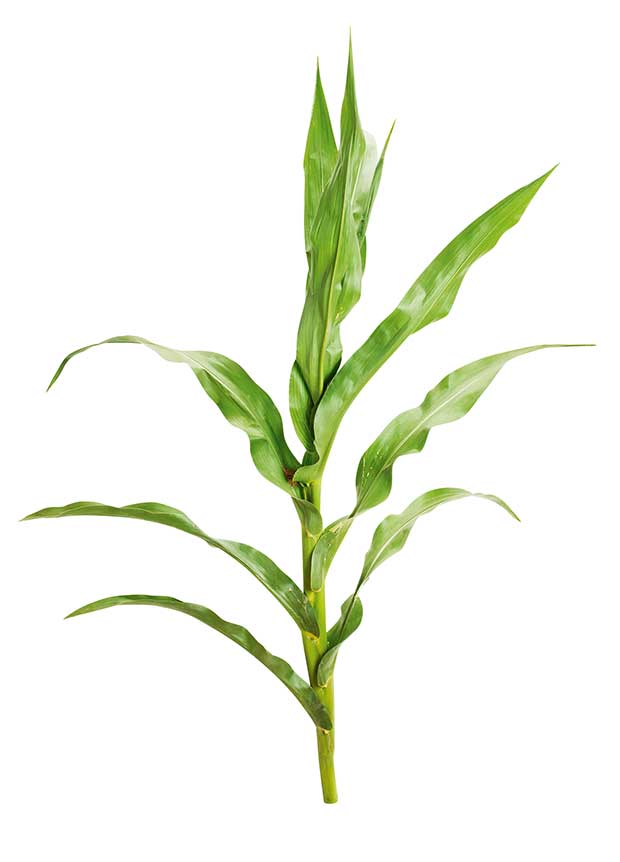 The exceptions will be stated in the Protocol for Testing Seed Imports for the Presence of Genetically Modified Seeds. Pelleted seeds will need to comply with the biosecurity requirements listed in the ‘New border measures for pelleted seeds for sowing’ document. 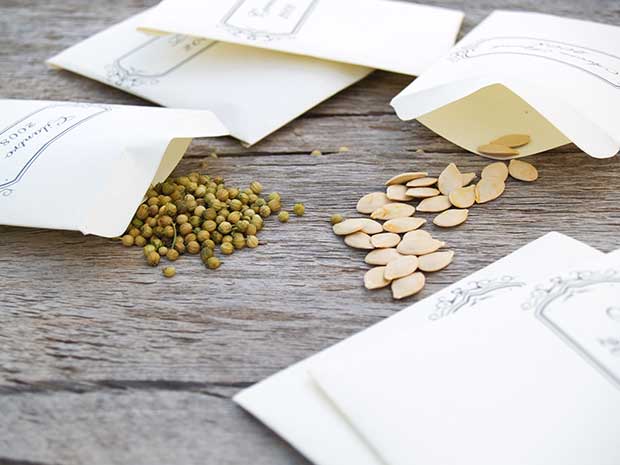 “A phytosanitary certificate is not usually mandatory,” says Austin. “The certificate can usually be arranged through the supplier with the required payment. The cost differs between suppliers – Jelitto lists €23.40 – and the certificate accompanies the order, but they state that this will not apply for a minimum order.

More stories you might like:
What is fourth-dimension garden design? How Nelson Lebo uses this approach on his 5.1ha permaculture farm

“Or you can arrange it yourself. I don’t get a phytosanitary certificate, but I do make sure my suppliers are reputable ones who, hopefully, will send clean seed.

“If you don’t have a phytosanitary cert, MPI does a good job for New Zealand importers and inspects all incoming seeds. An inspection fee is payable. The MPI inspection is done automatically when the seeds come in and they contact you and you pay and then your order is released.”

The fee for this is roughly $117 – check the MPI website for fee updates.

If all goes well, you can smile on receipt of your new Pink Popsocks cosmos that none of your friends have. 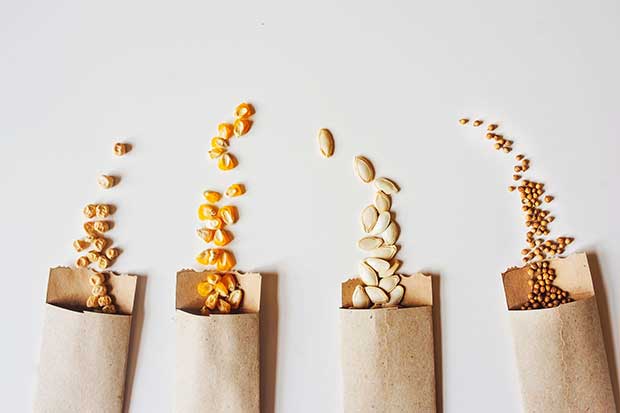 “I have had a shipment from a new supplier held by MPI as they were not correctly labelled by the supplier,” says Austin. “I was allowed to send the correct plant genus and species names, and after payment of a processing fee, my seeds were released.”

However, if they’re not permitted in the country, or are unclean, then the customer can choose to either send them back whence they came or have them destroyed – both are an added cost, usually.

“For the suppliers who don’t label their seeds as MPI require, I usually arrange with them now to add the correct naming after ordering their seeds. I send them the list I have ordered with the correct genus and species, and they add them onto the packets for me.

There is also the possibility that a particular batch of seeds ordered from overseas doesn’t germinate. This has happened to me, and to Austin too.

“Sometimes, for no apparent reason, the batch of imported seeds will not germinate. I have had this happen a few times, and so now I try to germinate seeds randomly from each incoming batch. If I find that the batch isn’t germinating properly, I take the item off the market immediately. 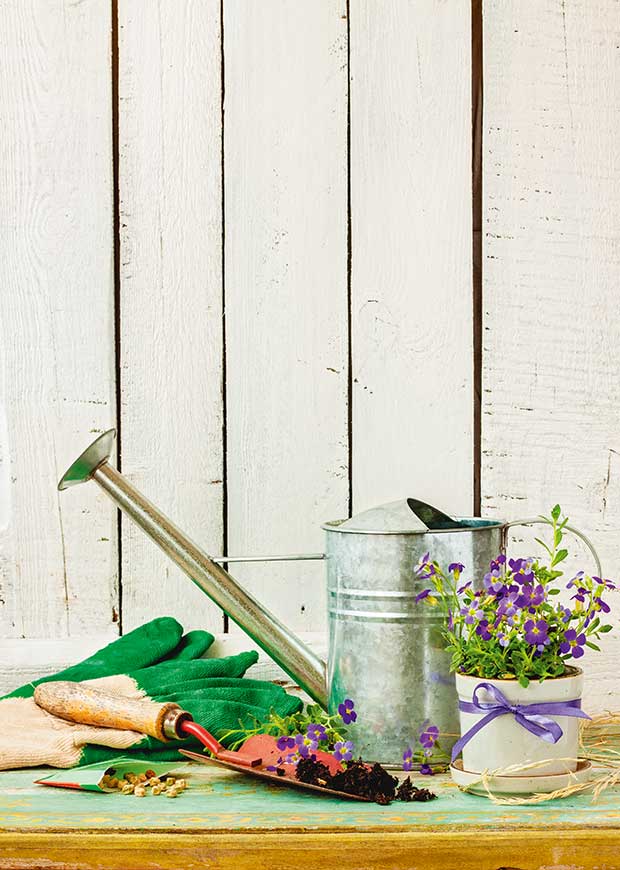 “The costs for the batch, of course, are lost and also the goodwill from any customer who was sent seeds from this batch before it was taken off the market. In this case, if they let me know, I will check that their batch is viable and refund the cost if it looks like it won’t germinate. I can recoup some of these costs if the germination is just low by selling the resulting plants from the random seed trial on the website.

More stories you might like:
How to make a homemade tea blend from herbs from the garden

“Some seeds, particularly perennials, take a special set of temperatures and a long time to germinate, and to prove they are viable can take some time.”

John Reeve is the owner of Tauranga-based GardenPost/Wildflower World. It’s one of New Zealand’s largest garden mail-order companies and imports bulbs, corms, tubers, rhizomes and seeds from all over the world. John goes one step further to ensure there are no problems with seed viability when he imports his wildflower seeds from the USA.

“Firstly, we send our order off to the company we are dealing with and they will send back a seed analysis report on each batch of seeds. This shows both a viability report and purity analysis. It also shows the testing method used and how much seed was analysed.

“The viability report shows the viable seed percentage for a batch while the purity report gives a breakdown of how much pure seed, other crop seed, weed seed and inert matter was in the sample. It also identifies the weed and noxious weed seeds found in the sample.

“If the viability is acceptable we then need to check the NZ MPI Plant Biosecurity Index website for any weed seed that is present in the sample and see if it is allowed into the country. We often lose 2-3 lines because the weed seed or other crop seed present is banned.

“Once this is complete, we resubmit our updated order and notify Mainfreight’s Air and Ocean division which corresponds with the seed company to collect and deliver our order. The seed company provides a phytosanitary certificate that is sent with the order.”

The incoming seed is inspected. John says occasionally there is an issue that may require the destruction of the seed.

“But in most cases, if there is an issue, we are required to meet with MPI staff and rework the product. It then is re-inspected and, if satisfied, the MPI staff allow its entry.”

All these checks are additional costs, something to bear in mind if you wish to import large amounts of seed. Freight charges can be another big expense, especially when you’re ordering from some European countries, and especially if you’re ordering only small numbers.